Every year the gadget world is swamped by new buzz words, technological breakthroughs or product types that we simply must buy into. For music fans the must-have gadget is a dock and the buzz word it must now have is ‘AirPlay’ – Apple’s wireless streaming connectivity capable of supporting lossless audio. So can we take a wireless speaker with none of this functionality seriously? Actually yes…


The ‘InMotion Air’ (iMW725) is a wireless speaker system which uses Bluetooth, making for an unfashionable product from Altec Lansing, itself similarly unfashionable in recent years. The good news is Altec (one of the oldest audio equipment makers in the world) is in the midst of a welcome revival and it is products like the InMotion Air which are driving it. 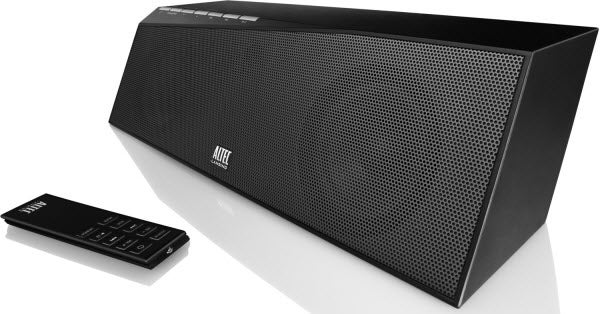 Take the Air out of the box and there is little sign of the delights to come. It is pleasantly compact and weighs just 450g, but the retro styling is a love or hate it affair. Arguably what is more important, however, is build quality is good and Altec has eschewed the fad for glossy plastics with a hardwearing matt finish that is immune to fingerprints. Sticking to its theme the Air also forgoes touch sensitive controls for clearly labelled physical buttons. You’ll find power, source/pairing, volume up, volume down, skip back and forward and pause/play along the front edge and each gives a reassuring clack when pressed.


As previously mentioned the Air isn’t a dock so there’s no port to charge your device, but it does mean no Apple favouritism or ‘Made for iPod’ licensing and more time spent focusing on the clever technologies lying inside. For those doing a double take I did just say ‘clever’ and I am going to talk about Bluetooth audio. You see what Altec claims is its proprietary technology transforms Bluetooth wireless audio from the mediocre, short range mess we all know into something comparable with lossless. Big talk.


To do this it uses Waves’ Maxx audio algorithms to enhance the quality of the speaker output and its own ‘aptX’ codec which “reproduces robust sound that’s true-to-life, providing CD quality audio, regardless of file compression encoding.” Obviously this latter quote is marketing fluff of the highest order, but happily it does work. No there isn’t CD quality audio regardless of file compression, that’s ridiculous, but the Air produces by far the best quality Bluetooth audio we’ve heard. 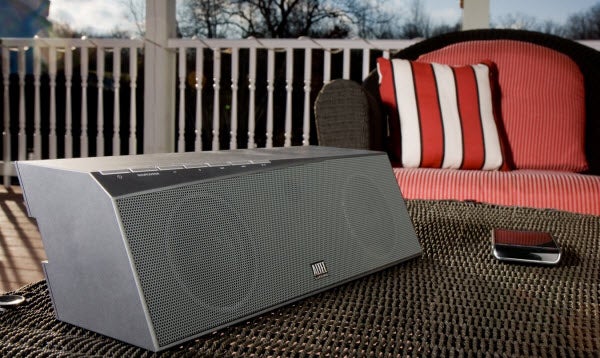 The use of A2DP means there is sufficient bass to do justice to the likes of Massive Attack’s ‘Atlas Air’, but the surprise is it packs power in the mid range and sufficient clarity to do justice to electro rock like Metric’s ‘Gold Guns and Girls’ and techno albums such as Apoptygma Berzerk’s ‘Harmonizer’. Meanwhile vocals are rich with Gil Scott Heron’s brilliant comeback album ‘I’m New Here’ sounding particularly good. Interestingly Altec hasn’t revealed the wattage of the Air’s speakers, but watts are hugely misleading and it is safe to say there is enough power here to fill a decent size room or entertain a house party.


Of course this is all relative. There is distortion towards maximum volume and audio purists will find sound on the muddy side overall. The Air was never going to complete with the truly remarkable performance of the Arcam rCube, but given that comes with a £500 price tag it isn’t meant to. The reason I make this comparison though is because, like the rCube, the Air has many more tricks up its sleeve…

Altec may have removed charging from the Air, but it more than makes up for it. Firstly not only can the Air stream from any Bluetooth equipped device, it also bundles a wireless USB dongle which can be plugged into any PC or laptop to perform the same function. Pairing via the dongle is automatic and since any sound from your computer will then come through the Air’s speakers it is a great way to enhance streaming radio or video and even Skype calls.


Altec takes this functionality a step further too since one dongle can connect simultaneously to two Air speakers making it easy to fill a home with sound. This would be no good if the Air had typically short Bluetooth range, but this has been bolstered with Altec claiming connectivity at up to 330 feet. We found this a bit far fetched, especially once walls were introduced into the equation, but it certainly was no worse than 802.11n WiFi which is a significant improvement. 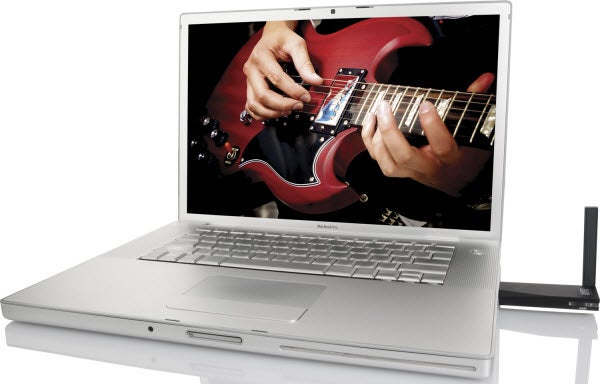 Another major plus is the Air has an inbuilt lithium ion battery making it truly portable. Again we found the claims of seven hours continuous playback from a single charge to be an exaggeration, but getting in excess of five hours on a mixture of low and high volumes is certainly commendable. I suspect such good stamina comes because the Air doesn’t have to simultaneously charge a device, but it is good to see the speaker capitalise on this opportunity.


Meanwhile the Air has numerous clever touches which help win us over. The remote control may not be the best we’ve ever seen, but it has all the core functionality you’ll need and neatly locks into place in the back of the speaker when not being used so it shouldn’t go missing. Behind this speaker slot is also a switch to turn off the battery. This means the battery isn’t constantly being charged when plugged into the wall which should improve its lifespan and a full charge from flat isn’t too long at just over five hours. 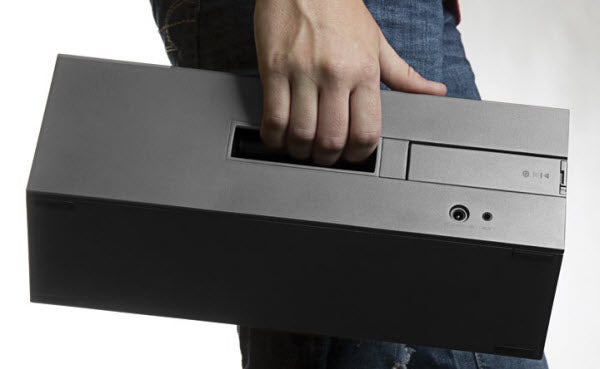 So it all comes down to price and at £179.99 the InMotion Air isn’t bargain basement (especially considering its $200 US RRP), but at the same time it is good value for something fairly unique. The inclusion of the PC USB dongle is a real vote winner too (it is a £70 extra on the rCube) and for those without the money to spend on a Bose SoundDock Portable or the aforementioned rCube it makes for an excellent, affordable alternative.

As Huey Lewis and the news once sang It’s hip to be square and the InMotion Air is as angular as they come and in dropping dock functionality and betting on Bluetooth probably as unfashionable as well. Don’t be fooled though, Altec Lansing has performed miracles with the Air’s Bluetooth streaming, extended its range, crammed it full of clever functionality, stuffed in a great battery and kept the price down. There are far worse fashion faux pas you’ll make this year…