Listening to music is probably our favourite activity on the go, and it’s fair to say that many people reading this site own an MP3 player. But no matter what you use to listen to your tunes, be it an MP3 player, phone or even portable CD-player, if it has an on-board speaker in the first place it’s not likely to be very good. Even most notebook speakers, with the notable exception of Toshiba’s Qosmio range, hardly do justice to anything but the audio basics. And while in many situations headphones are the ideal solution, sometimes you want to share the sound. Enter Altec Lansing’s latest revision of its Orbit portable speaker range, the iMT237. According to the box, this is a “mighty little speaker”, so let’s find out if this claim holds up. 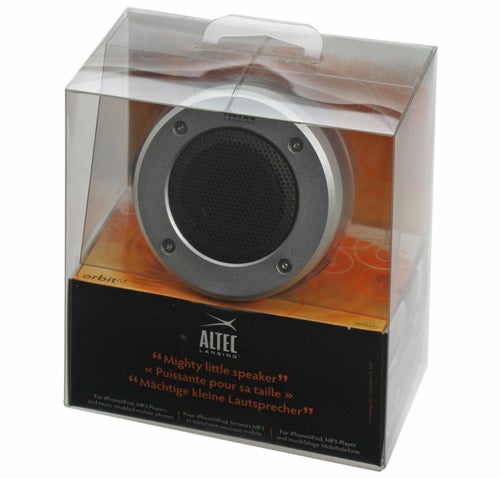 Inside the well presented packaging you’ll find not only the speaker itself, but also a quick-start guide, 3.5mm to 2.5mm audio jack adapter (so often omitted), wrist strap and carrying case. The latter is much nicer than you’d expect to find with a product costing under £30. It’s made of foam coated on both sides with nylon, lending it a rugged and durable feel and providing good protection. It fits snugly around the iMT237 Orbit speaker and then simply zips up. The zip is covered when closed so it won’t snag and there’s a strong metal clip which you can use to attach the case to a belt loop or bag strap to free-up the precious space in your bag. The case’s dark and light grey colour scheme, meanwhile, matches the iMT237 Orbit perfectly. 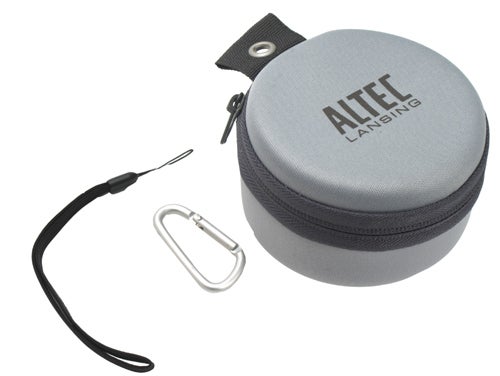 Finally onto the portable speaker itself. The iMT237 is a revision of the first Orbit speaker that Altec Lansing brought out, which sports a different design and comes without a case. It’s powered by three AAA batteries, which are supplied, and should be good for up to 24 hours of use. While it would have been nice if the speaker was powered over USB, unfortunately that’s not an option here. Still, at least you can use rechargeable batteries. 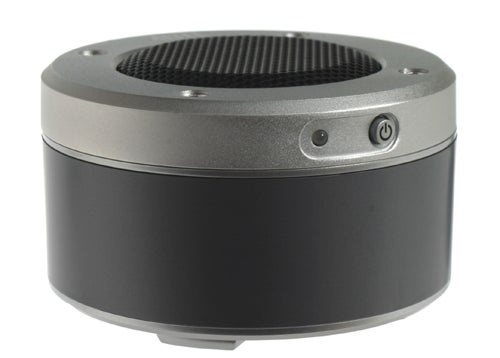 At only 190g, the cylinder-shaped iMT237 is light but it still appears rather imposing for such a small device (only 5.5cm tall with a diameter of 9cm). This is partially because of the metal upper part, and partially thanks to the industrial-looking ‘bolts’ arranged along the top. The former also helps to convey a solid feel, and build quality – while not quite exemplary – is very good, so you should have no fears taking this little speaker out and about.

The iMT237 is quite simple in design. The main part is dark grey plastic, with a silver rim visible at the base to complement the much thicker silver-coloured one at the top. Below this is the stand, which has four grippy rubber pads that won’t damage whatever you put the unit on. The base screws off easily to reveal the battery compartment, though annoyingly it does have to be put back on in the same orientation as it was taken off.


Wrapped around the base is the audio cable terminating in a 3.5mm jack, for which there is an indent that holds it neatly tucked away. To be honest, this cable could have done with being a bit longer, as it only gives you about 20cm to play with. On the other hand, you can always get a cheap 3.5mm audio extension cable if you find the Orbit doesn’t offer enough. 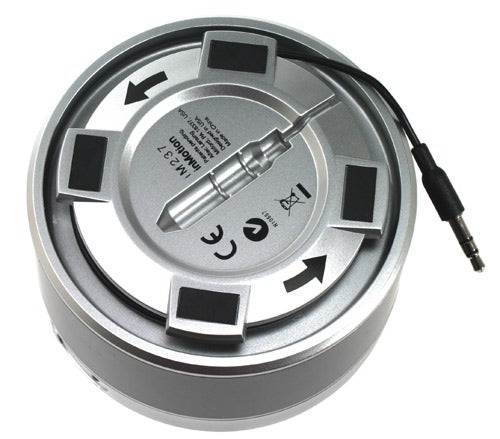 At the ‘front’ of the iMT237 Orbit’s top metal part is a small power button and green power LED, both recessed to help minimise any wear when repeatedly putting the speaker away. Nothing about this power switch is automatic, so if you accidentally leave it on you’ll likely end up with flat batteries in the morning. There’s also no independent volume control so you’re totally reliant on the output of the source device.


On the opposite side of the device is a small recessed clip for attaching a lanyard or the included black carrying strap and at the top of the device is a robust black metal speaker grille. The driver underneath it looks promising in its girth, but will it be able to deliver?


Altec Lansing claims that the iMT237 Orbit Portable Speaker provides a 360 degree sound field due to its cylindrical shape, but what you’re getting is essentially a mono speaker. After all, for under £30 you can’t expect any fancy surround sound virtualisation technology. All the same, as long as your expectations are realistic, the sound it produces is quite reasonable. 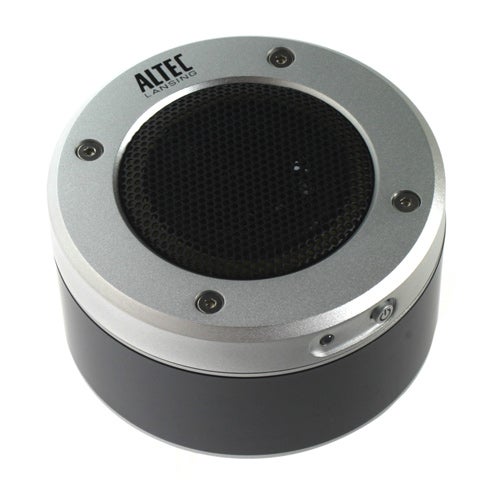 It doesn’t quite manage to belie its size like the frankly incredible Edifier MP300 Plus portable speaker system, but it’s certainly an improvement on the speakers many notebooks have, not to mention the pathetic efforts found in most MP3 players or phones. Altec Lansing’s ‘mighty little speaker’ doesn’t do the best job of handling bass, meaning music does have a tendency to sound a little sharp, and it also distorts quite badly at high volumes. But at the right settings, its performance is still impressive for its size and it can competently put out enough volume to watch a film or listen to some music with a few friends.


The only real complaints I have with the iMT237 Orbit is that it can’t receive power over USB and doesn’t have its own volume control, but neither of these are deal-breakers. In terms of audio quality it’s thoroughly beaten by the Edifier MP300 Plus speaker system for only £20 more, but then those come in a small briefcase and require mains power. So if you’re looking for an audio solution that’s truly portable, the Altec Lansing iMT237 Orbit Portable Speaker is worth a look.