While it’s fair to say that there is a vast number of products that give style far greater priority than substance, it would be churlish to dismiss any product that has an interesting design as rubbish – as the Ferguson Hill FH007 and FH008 speakers demonstrated with aplomb. 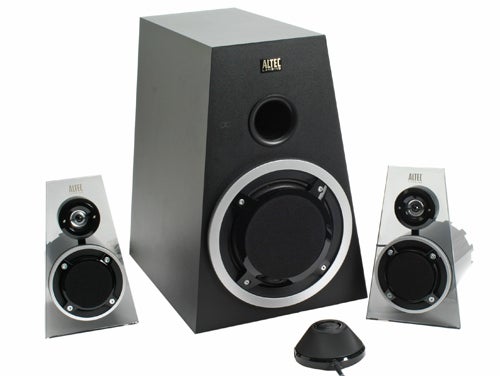 As such, while it would be hard to dismiss the suggestion that the Altec Lansing Expressionist Ultra 2.1-channel speaker system has been created to look, rather than sound, striking, such an assumption isn’t necessarily accurate. No, just because they probably wouldn’t look out of place installed in the Tate Modern – which I don’t necessarily mean as a compliment – doesn’t mean you should discount the worthiness of a set of Expressionist Ultra speakers hooked up to your PC, TV or games console.


The real problem with the design, is that it’s, well, a bit naff to be frank. For a start the sub woofer is huge beyond necessity. You only have to look at rival 2.1-channel systems such as the Razer Mako or Creative GigaWorks T3 speakers to see that it’s entirely possible for a small-ish sub to pump out decent bass – and without looking like a monument to Tutankhamun. The satellites aren’t much better, either. The smoked plastic surrounds don’t really scream quality and the glossy black casing for the mid-range driver means the units take up a fair bit of space.

So far, so subjective and I’m not so arrogant as to think that my opinion will be shared by everyone, In fact I’m sure more than a couple of you are looking at the pictures and wondering how I could be so blind. Alas, there are some more fundamental issues.


The foremost of these is the number of inputs on offer. Or rather, input. The rear of the subwoofer houses – aside from connection points for the system’s controller and the left and right satellites – a single 3.5mm jack. There is, at least, a converter included to change a pair of phono connectors into a 3.5mm mini-jack but when both the T3s and Makos offer two inputs, it’s rather miserly of Altec Lansing not to do likewise.

Admittedly there is a line-in on the controller, which also has a headphone connector, but you’ll hardly want to leave anything hooked up to that permanently. The controller also has a standby button and two more labelled Bass and Treble. You won’t have to be a genius to figure out that pressing these swaps from changing the master volume, to adjusting the bass and treble instead.


This is where things take a definite turn for the worse though. Instead of a simple, tried and tested volume wheel, the dial on this controller rotates about 15 degrees left or right, giving a couple of clicks as you twist it just in case you hadn’t noticed you were doing so. Hold the dial off-centre and the volume will increase of decrease, the speed at which it does is determined by how far you’ve rotated the dial. As you might guess, this makes fine adjustment an effort in futility. A mute button is conspicuous by its absence, too. 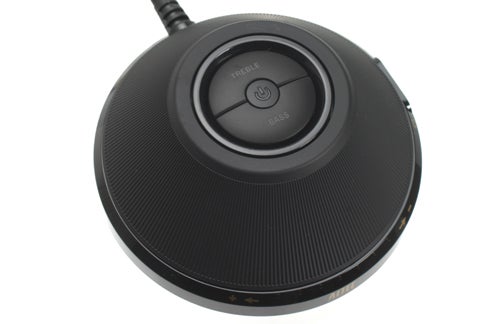 Luckily while some aspects of the system are a bit sketchy, the audio quality goes a fair way to making up for it. There’s plenty of clarity and, as you’d hope given the size of that subwoofer, a decent amount of low frequency presence. Heading to the TrustedReviews Trailers folder and playing the latest trailers for The Imaginarium of Dr Parnassus and Fantastic Mr Fox proved the Expression Ultras capable of creating a convincingly wide soundstage. You’d have to be particularly picky to be disappointed watching a film or two using these speakers.


A play through Origin of Symmetry (a better effort from Muse than their latest) was a pleasurable experience, too. Matt Bellamy’s skill with a piano isn’t wasted on Space Dementure, reproduced with plenty of presence but no lack of clarity, without overshadowing the crashing drums and bass guitar. The same can be said of the storming riffs in Citizen Erased, searing out with plenty of power and precision which isn’t lost even with the volume turned up to colleague-annoying levels. 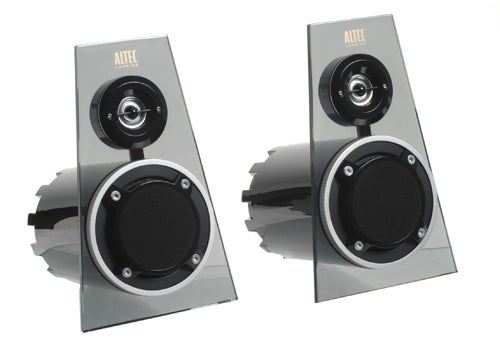 Switching to The Smashing Pumpkins’ The End is the Beginning is the End, confirmed that the clarity isn’t quite up with the Creative T3s or Razor Makos, though. The extra crackles and pops that you can just about pick up with the Creative T3s were nowhere to be heard with the Expression Ultras. Plus the T3s are smaller and, I think, better looking despite being no more expensive.


Ultimately that’s the biggest issue with the Expression Ultra speakers: there are plenty of similarly priced, better featured alternatives.


Love it or hate it design excepted, there’s no complaining about the performance of the Altec Lansing Expressionist Ultra speakers. Just be aware you could get more for the same money, albeit with a more conventional design.