Bluetooth headsets have become somewhat commodity items. As such, when I received various emails and phone calls about the Jawbone headset, I wasn’t particularly enthusiastic, and didn’t bother to request a review sample. Despite my complete indifference to the Jawbone, the guys at the PR company saw fit to send a sample to me regardless, and I have to say that I’m rather glad that they did. You see, despite the fact that I consider Bluetooth headsets to be commodity items, the Jawbone is, without doubt, the best example I have ever used. 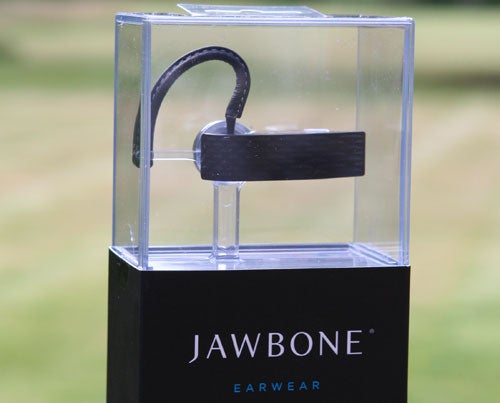 It’s patently clear that Aliph is pitching the Jawbone as a premium product, complete with premium packaging. There are no cardboard boxes or blister packs in evidence here. Instead you get a solid plastic case with a hinged door and a display stand on which the Jawbone floats for all to behold. The bottom half of the box is shrouded in a cardboard sleeve, which once removed, reveals a set of “quick start” instructions. The bottom half also hides all the accessories, which are split up into separate, labelled boxes, much in the way that iPods used to be packaged.


Often when a manufacturer goes to such lengths to produce high quality packaging, the actual product doesn’t match up – not so in this case. Even before you touch the Jawbone, you can see that it’s a high class bit of kit. The diamond pattern of the black, textured outer shell looks superb, while the black leather bound ear hook, with contrasting grey stitching just adds to the stylish look. While most Bluetooth headsets leave you looking like an extra in a low budget sci-fi movie, the Jawbone looks like an accessory that came in the pocket of a Kenzo suit. 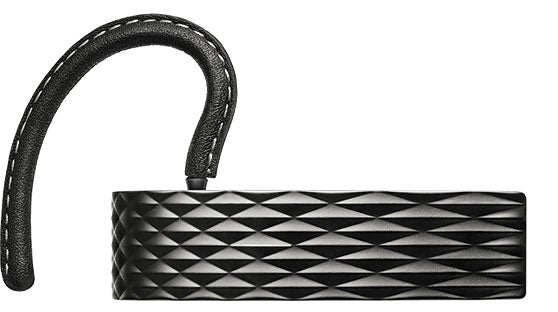 The Jawbone is also available in three different colour combinations – there’s the black version that I was sent, but you can also get silver and gold finishes. Personally I’d stick with the black, unless you’re into ostentatious jewellery or Luis Vuitton hand bags. The black version has a supremely stylish simplicity about it – as I’ve said before, black will always be the new black.

The Jawbone comes out of the box with a medium sized ear-hook and earbud, but these can be changed for smaller or larger items, all of which are supplied. I found the medium sizes to be perfect, and was pleasantly surprised at how comfortable the Jawbone is. Not only is this the most comfortable Bluetooth headset I’ve ever used, but it’s also extremely easy to put on, even using one hand. The leather ear hook slips easily over your ear, then the earbud sits comfortably in your ear, while the device itself rests upon your face. 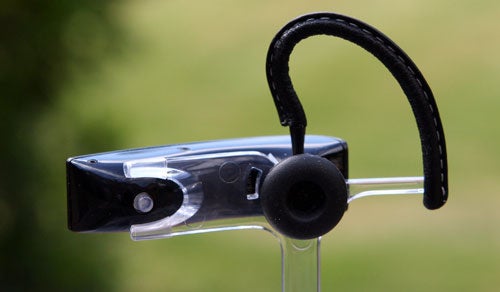 It’s the way this headset rests against your face that gives it its name. On the inside of the device is a sensor that reports movement from your jawbone, which indicates that you’re talking. The Voice Activity Sensor (VAS) detects when you’re talking, then sets the Noise Assassin algorithms to work on separating the frequency of your voice from the ambient noise. It’s the Jawbone’s ability to tell exactly when someone is speaking, that allows its noise suppression algorithms to work so effectively – without that VAS, it would be difficult to tell exactly what is the user’s voice and what is background noise.


Of course all those clever sensors and complex algorithms wouldn’t mean a thing if the end result isn’t up to scratch, but thankfully that’s not the case. In fact, the noise suppression in the Jawbone is so good, that when I called my wife from my car, while travelling at speed on the motorway, she didn’t even realise that I was driving! When it comes to eliminating ambient noise, the Jawbone is a master – it definitely lives up to that Noise Assassin moniker. 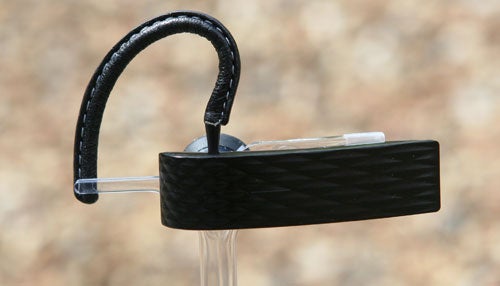 The Jawbone also ships with an excellent USB charger. I say excellent, because like a Blackberry charger that I got my paws on years ago, this charger has a USB port on it, so you can plug any USB charge cable into it. Obviously the Jawbone comes with its own USB charge cable, but if you wanted to charge, say, your iPod or your Windows Mobile Smartphone, you could simply plug their cables into the Jawbone charger and start juicing up. I’m not sure whether this is the reason that Aliph has included this kind of charger, but it’s very welcome nonetheless. On the downside, the Jawbone uses a proprietary charge connector, rather than the nearly ubiquitous mini-USB.

There are a couple of oddities about the Jawbone though, mostly surrounding its control system. Although there are two buttons, neither of them are visible – they are positioned underneath the fascia, and activated by pressing in their general vicinity. That’s all fine, until you come to adjust the volume. Unlike most Bluetooth headsets that have volume up/down controls, the Jawbone will cycle through its volume settings in a wrap around manner, so if you want to turn it down a notch, you can’t do so without turning the volume up to maximum first and wrapping back to the start. 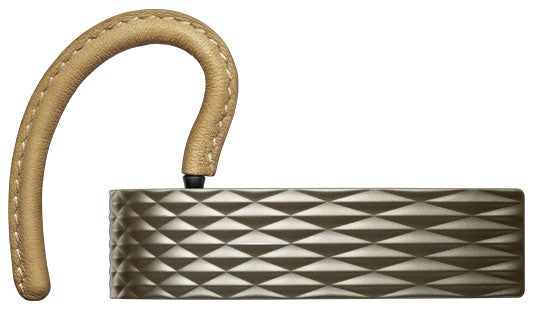 ”’(centre)There’s a gold option for anyone who wants to make more of a fashion statement.(/centre)”’

But even taking those foibles into account, this is still a first rate hands free solution for anyone that doesn’t have built-in Bluetooth support in their car. The only downside is that the Jawbone is pretty expensive compared to other Bluetooth headsets on the market. The best price I could find for this new Jawbone is around £75, which is a pretty hefty investment for a Bluetooth headset, even compared to Apple’s overpriced iPhone headset. That said, you are getting some unique design and technology features with the Jawbone, and it does work better than any other headset I’ve tried.


There’s no denying that the Noise Assassin technology inside the Jawbone works supremely well, and knocks most other Bluetooth headsets into a cocked hat. The Jawbone also looks superb and is incredibly comfortable to wear, even for extended periods. All that functionality, style and comfort does come at a high price, but as always, if you want the best, you’re going to have to pay for it.