We all have something we love, but may not recommend to others. A PC Engine, minidisc player, or Right Said Fred record collection, but whatever it is the universal theme is guilty pleasure. So let me introduce you to my latest guilty pleasure: the Aliph Jawbone Jambox.


If the Aliph name seems familiar to you, it should. The company may largely hide behind its Jawbone brand, but it has been responsible for arguably the best range of Bluetooth headsets on the market – currently spearheaded by the Prime and Icon. These products standout because of Aliph’s attention to detail, class leading sound quality and slick design. So it stands to reason that if you’re a dab hand at Bluetooth audio you should expand your remit… doesn’t it?


Well kinda. With the Jambox Aliph has created its first Bluetooth portable speaker and it makes quite an entrance. Styled within an inch of a Cupertino secret lab, the Jambox is a great example of minimalist design at its very best. The top and bottom are constructed from hardwearing, tactile rubber which sandwich a metal grill that mimics the Jawbone Prime and Icon designs and brings an instinctive unity to the range. Each colour also has its own distinctive texturing: ‘Black Diamond’, ‘Blue Wave’, ‘Grey Hex’ and ‘Red Dot’.

Furthermore, operation couldn’t be simpler. At the right hand side of the Jambox is a micro USB port for charging, a 3.5mm audio input for wired connection and an on/off switch which can also be held in the on position to initiate pairing. Along the top are oversized plus and minus buttons to increase and decrease the volume and an indented circle which speaks the battery charge status when pressed, or initiates a loudspeaker conferencing mode (via built in mic) when held.

So far so good and things get even better on the software side as Aliph has co-developed it with MyTALK, an online platform which allows the Jambox to upgrade its firmware and work with third party apps. Currently these apps include new Jambox voices, the ability to dictate emails and SMS messages and even post content to Facebook and Twitter. Perhaps most exciting, however, is ‘Simultaneous Multipoint’, an app which lets two Bluetooth devices connect at once. In real terms this could mean connecting to a laptop/tablet for beefier audio when gaming then having it automatically switch over to your phone when a call comes in. Aliph really does excel at attention to detail and it means the Jambox is like no other portable speaker.


So why is it a guilty pleasure? Two significant reasons…

The problem you’re likely to encounter is controversial only in context and that is audio quality. Aliph has a tremendous track record with Bluetooth headsets and the power it manages to crank out of a device measuring just 151 x 57 x 40mm is nothing short of remarkable. Sound does distort at maximum volume and you’re not going to vibrate your window frames, but there’s a surprising amount of bass via Bluetooth 2.1 EDR (enhanced data rate) and A2DP 1.2 (Advanced Audio Distribution Profile) and while a little muddy, sound is rich and conveys bags of emotion. It is perfectly suited for a dinner party or small gathering and at 327g you can put it in a pocket afterwards. 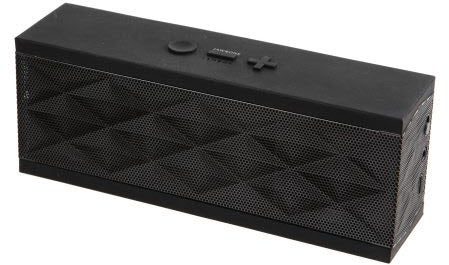 Aliph quotes output level at 85dB at 0.5m with frequency response of 60 Hz – 20 kHz and, given its size, it will be no shock that the Jambox uses proprietary acoustic drivers (stereo pair) and a proprietary passive bass radiator. In the strictest sense sound from the Jambox may not be amazing in its own right, but it is ”amazing for the size”.


So where does the ‘context’ part come in? It is fundamentally tied to the second significant issue: price. Aliph is charging a whopping £159.99 for the Jambox and for that price (and a lot less) you can buy all manner of conventional speaker docks that offer louder, clearer, quite simply ”better” sound quality that are also capable of charging your device. They may not be as portable as the Jambox, but you’re paying one heck of a premium for Aliph’s little speaker – no matter how well polished it may be.

At this point the majority of you will have decided to keep your money in your pocket and for that we can’t blame you. It is a shame though, because there are still more good things about the Jambox. Key among these is battery life, with Aliph claiming up to 10 hours of continuous playback from a single charge. This can vary depending on volume level and audio content, but I topped eight hours at just under maximum volume feeding it a diet of BBC Radio Five Live, Gil-Scott Heron, The Indafels and The American Analog Set.


Aliph doesn’t skip on the Jambox bundle either supplying 60in and 12.5in micro USB charging cables, a 36in stereo cable, A/C wall charger and carrying case. Is it a £159.99 bundle? No, but you’ll want one nonetheless. 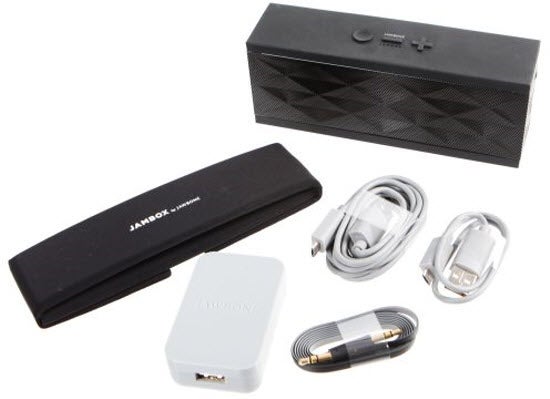 Buy a Jawbone Jambox and you’ll be desperate to pull it out at parties and impress your friends. The problem is they’ll ask you the price and you’ll feel rather silly. Ultimately the Jawbone Jambox is a hugely impressive feat of engineering with admirably rich, powerful sound at mid and upper volume levels, but Aliph needs to price it under £100 if it really wants to be taken seriously.


Time for some Right Said Fred…