What is the Alienware X51?

Alienware is one of the strongest global brands of gaming PCs, with a range that now stretches to multiple mobile and desktop form factors. While many gaming PCs come in giant towers, the X51 packs a top-of-the-line CPU and mid-range graphics into a desktop chassis that’s not much bigger than a current-generation console.

The X51 line has been around for a while – Trusted covered the previous version back in September 2014. This update is really more about introducing up-to-date technology and a spec boost than a radical design overhaul. Our original criticisms of the previous version focused on its specification, which wasn’t capable of gaming beyond 1080p resolution, lacked an SSD and lead to some toasty internal temperatures. Have these issues been resolved with new-generation hardware?

The X51 is all about squeezing a capable gaming PC into a console-sized chassis. As with previous versions, its dimensions make it only slightly larger than a PS4 or Xbox One, with a width of 9mm and a height of 343mm (in vertical orientation).

If you’ve worked in an office at any point over the last decade, there’s a high probability you’ve used one of Dell’s slim corporate desktop systems, and the X51 borrows heavily from them. It has two sets of rubber feet for both vertical and horizontal placement. A glossy plastic cover runs around the side, featuring the iconic Alienware logo on the front that illuminates in blue, along with a plastic section at the top that’s illuminated with LEDs. 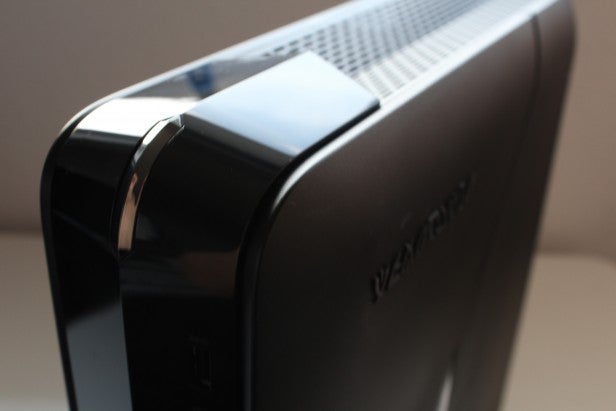 The edges are curved at the front. The power switch sits on the right, its status indicated by a white LED. There are two front-mounted USB 3 ports and audio, but notably, the optical drive of last year’s model has been given the chop. This reflects the modern dominance of cloud services such as Steam and Origin for gaming.

Quad-core Intel Skylake processors are the new performance champions for PC gaming, if only by a disappointingly slim margin over the previous Core i7-4790K Devil’s Canyon chip. The X51 comes with a Core i7-6700K, but by default, it doesn’t run at its full 4.2GHz Turbo Frequency. Instead it’s limited to 3.9GHz, the lower clock speed is intended to keep down internal temperatures, which can be potentially problematic in small chassis gaming desktops.

The Alienware Command Centre software makes it easy to change this, however. With this R3 version of the X51 – there are four listed on Dell’s site – the CPU has an all-in-one liquid-cooling system that allows that clock frequency to be raised to 4.4GHz. This software also lets you fiddle with various settings – the Alienware FX mode, for example, which changes the colour of the LEDs on the top of the unit.

As with last year’s PC, Alienware has chosen a mid-range graphics card for the X51. The “Maxwell”-based Nvidia GeForce GTX 960 is a slight improvement over the Radeon R9 270 in the previous machine. It only has 2GB of GDDR5 memory, which isn’t a huge amount by today’s standards, but enough for solid 1080p performance. This card comes with 1,024 stream processors, 32 ROPS, 64 TMUs, a base clock of 1,127MHz and memory frequency of 1750MHz. 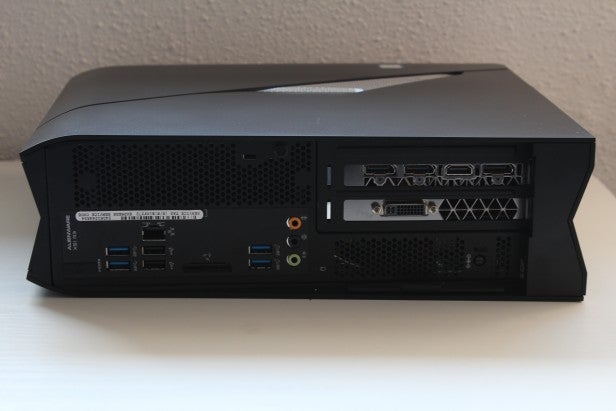 It has 16GB of DDR4 memory, running at 2,133MHz. There’s also a 256GB Samsung PM951 PCI Express SSD, plugged directly into the motherboard’s M.2 slot. PCI Express SSDs come in all shapes and sizes, offering wildly different performance figures. Samsung’s 950 Pro is the current king by a long way, with read and write speeds of well over 1GB/sec; the enterprise-grade SM951 isn’t too far behind.

The PM951 isn’t quite as good, though. While it’s a PCI Express Gen 3.0 device including NVMe support, with quoted read speeds that are an impressive 1,000MB/sec, the 280MB/sec write speeds lag behind normal 2.5-inch SSDs. It’s inclusion is probably down to saving internal space from the small M.2 form factor, rather than the performance. But those read speeds are still very nice indeed.

Additionally, there’s a 2TB Seagate hard disk, an obvious essential for a large library of games or media.

Windows 10 Home comes as standard on all X51 configurations and Steam comes preinstalled as well. During testing, I was cursing Dell’s inclusion of the McAfee antivirus trial, which had expired and kept popping up during benchmark runs requesting I pay them money. Not a chance, matey.

The Core i7-6700K processor delivered some excellent results at its default 3.9GHz clock frequency. In Geekbench, the multi-core result of 16,533 still outclasses the older Core i7-4790K at its 4.4GHz Turbo frequency, although the lower clock speed means a worse single-core result of 4,177. Nevertheless, expect superb performance in CPU-bound tasks such as video encoding.

The PM951 offered better performance in CrystalDiskMark than Samsung quotes on its web page, with 1,500MB/sec read speeds and 330MB/sec write. These results are good, but write speeds are lower than you’d achieve with a normal 2.5-inch SSD, so this drive really isn’t quite as impressive as you might hope from a PCI Express 3.0 device. 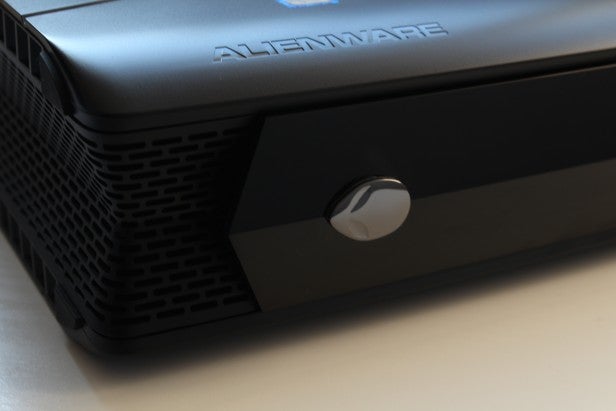 You’re probably most interested in the gaming performance of the X51, however, and here it puts in a reasonable showing.

I first tried a fairly up-to-date game, Grand Theft Auto V, at its default video quality settings. There’s no simple way to choose between Medium, High or Ultra detail, but these settings were restricted by the 2GB of video memory, with many of the advanced visual settings disabled. The X51 managed fine at 1080p, putting in an average frame rate of 50fps. Raising that to 1440p dropped this to 39fps, while at 4K it could muster only 25fps. Note that, with additional graphical detail, these frame rates would be much lower.

In BioShock Infinite at 1080p with Ultra detail, the X51 clocked an average result of 71fps, with 37fps minimum. Again, though, at 1440p it couldn’t quite stay above 30fps, with an average frame rate of 46fps, but a minimum of 27fps.

Internal temperatures look quite good. Idling around 36 degrees, this went up to 76 degrees after 20 minutes of Prime95 testing, maximising the CPU resources.

Noise output was particularly low. I recorded 41dB when idle and 44dB during the Unigine 3D benchmark. Again, with Prime95 running and the CPU fans at full pelt, it went to 47dB, with a noticeable hum but no helicopter-like piercing sound.

Our second review unit, upgraded to an Nvidia GeForce GTX 970, performed significantly better. In Shadow of Mordor we saw an average frame rate of 68.6fps, a big improvement reflected across our selection of benchmarked games.

With a GTX 970 on board, Alienware is now marketing the X51 as a VR-ready PC, and it certainly delivers in this regard. Games such as EVE: Vakyrie and Project CARS both perform well, although the latter did have to have its settings dropped to lower detail in order to play the game smoothly with a full grid of cars in stormy weather.

This isn’t unexpected; the GTX 970 is the bare minimum when it comes to both Oculus Rift and HTC Vive VR games. If you’re only going to be playing some of the more casual titles and experiences then you’ll be fine, but otherwise you should probably look to spend a little more on a PC kitted out with a higher-performance GPU.

What you gain in graphics power you lose in processing performance in order to keep the cost under £1,000. Still, the Intel Core i5-6400 is a powerful processor that won’t prove a bottleneck when playing games, so unless you’re going to be rendering video on a regular basis, this will suit you just fine. 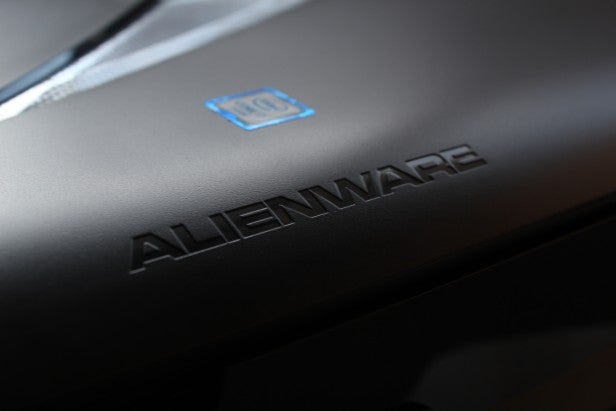 Should I buy the Alienware X51?

Benchmark results show that the X51 absolutely nails 1080p gaming, and with the GTX 970 on board (which I would recommend over the GTX 960) it’s a capable VR rig.

It’s also one of the smaller VR-ready PCs you can buy off the shelf right now, which is a big mark in its favour. However, it’s still quite expensive, whichever way you look at it. You pay a premium for compact size, which for many won’t be worth it.

It’s expensive for what it is, but the Alienware X51 is a reliable and compact gaming PC that’s ready for VR.