As Wil described in his piece yesterday, the PC has come a long way from the bland, corporate box that it used to be in the early nineties. Nowaday, even cheap, cheerful machines are attractively coloured and housed in interesting boxes. If you go high-end however, you can get something really cool looking like the Dell XPS 700 or pretty much anything from Alienware. Alienware as a company has a reputation for gaming PCs that sits some way above the regular component manufacturers such as Evesham, but below the super exclusive exotica of the likes of VoodooPC. An Alienware is impressive without being too over-the-top. That said, they tend not to be inexpensive beasts. The last time I looked at one of its machines, I started off quite enthused but was gradually ground down by the sheer cost of nearly £4,000 and some poor assembly choices. 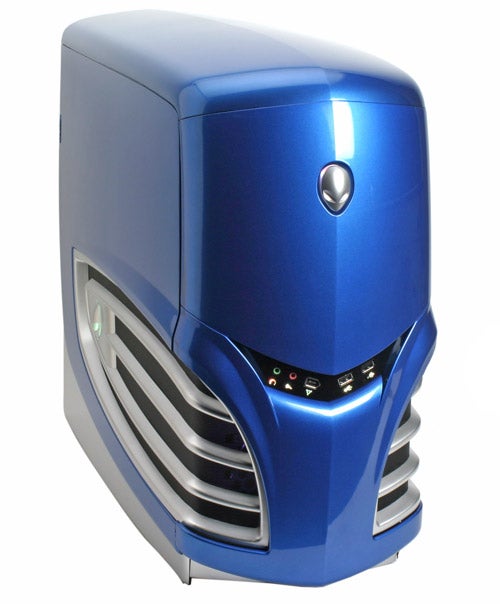 This time, these mistakes are mostly absent and my overall impression is bolstered by a updated P2 chassis. It’s not as radical an overhaul as I was hoping for, but it is an improvement. For one, it’s not as large as the previous system, which was on reflection, needlessly large and bulky. This one maintains the distinct Alienware look, the alien head on the front, the side vent ports and the curves all round. It still looks like it’s baring its teeth and ready to pounce – which is no bad thing. To the touch the case still feels like the plastic it is though, and does seem less impressive than the solid metal housing of Dell’s XPS 700.


A nice touch is that the Alien head on the front doubles as the power switch. There was some amusement and head scratching as we were foxed for a few seconds on how to turn the thing on when we first unboxed it and plugged it in, before someone decided to give the little guy a thump and the system came to life. 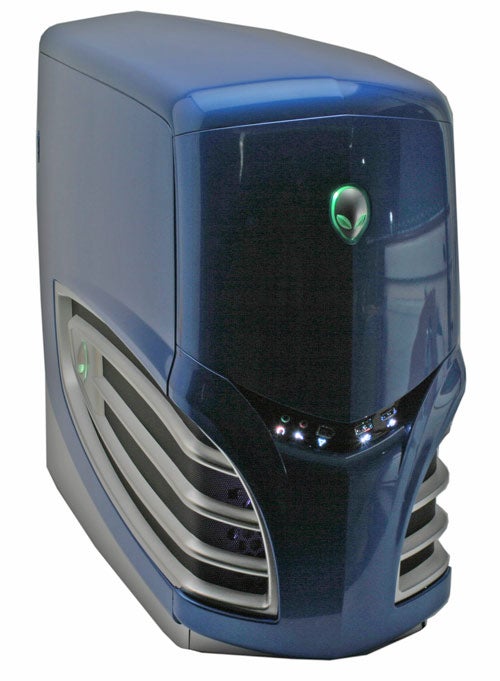 When it did we were pleased to see LED lights shine out from behind that iconic silver head, while there are also lights under the two alien heads on the sides. There are also a number of lights on show in the centre of the front fascia under the front mounted ports, which have been moved up from near the base. It’s not just USB ports at the front this time either – as well as two of those there’s also a full size FireWire port and microphone and headphone sockets. This makes it nice and easy to hook up most things you’ll need to – iPod, game controller, DV camera, headset for gaming or Skype.


As with Dell’s XP, you can adjust the lights on the front, but unlike the Dell you can do this from inside Windows with a software utility – though it is rather odd affair. You can control the speed at which the lights flash and even get them to do so when you get an email or open an application. You are also supposed to be able to get them to fade from one colour to another but it’s an affect that’s was too subtle for me to spot. 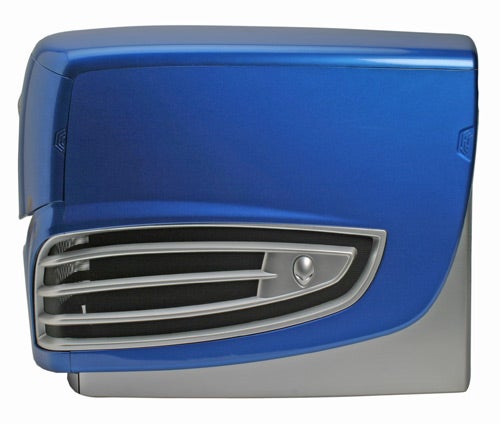 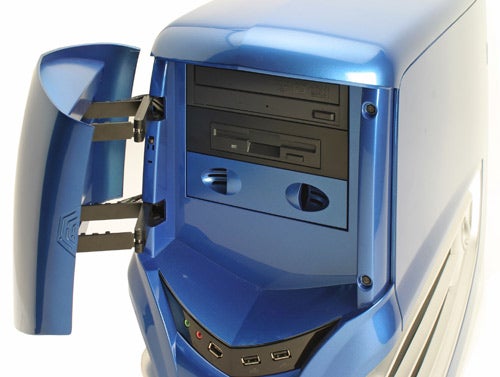 Above the lights is a door which cooly opens sideways on hinges to reveal the external drives. Round the back, you’ll find that the rear of the system has been clad in a silver cover and the blanking plates treated with a black coating, which adds a quality feel. The rear connectivity adds another four USB ports, two Gigabit capable network ports and connectors for 8-channel audio. However, this could be confusing as this is from the motherboard integrated audio, which isn’t used and for which no drivers are installed. This means you can’t use the optical and coaxial S/PDIF connectors – though you could of course manually install the drivers should you need them. Usefully there’s an E-SATA (external SATA) port, so you could house a regular SATA drive in an Icy-Box and get full speed connectivity.


Alienware advertises toolless entry for the system and that’s what you get – though pulling the side off is easier than getting it back on. Inside you’ll find that the interior chassis is essentially a regular PC, which is somehow a little disappointing compared to the swish exterior. There’s plenty of space inside and I could only be impressed by the neatness of the cabling and layout – it’s immaculate and as good as I’ve ever seen. The graphics and sound card are also secured down with card keepers, so there shouldn’t be any unwanted movement in transit.

Alienware has mounted a full size 120mm fan to the front and rear of the case. The CPU cooler is a stock Intel model, but in it does a good job and doesn’t make too much noise. The power supply does though. It’s a 650W SilverStone SST-ST65ZF, which does it’s job but makes the vast majority of the noise from this system. We stopped the CPU and rear fans for a few seconds and the noise level barely dropped. This is a shame as there are quieter PSU’s out there and using one would really enhance the overall impression of the system – it would be silent as well as deadly. Perhaps Alienware is keen on the RoHS compliancy of the SilverStone.


The motherboard is an Asus P5N32-SLI SE Deluxe and is based on the nForce4 chipset. Both the North and the Southbridge are passively cooled. The motherboard has two x16 PCI-Express slots but only one card has been supplied – it is SLI though in the guise of a GeForce 7950 GX2. The second slot is free should you wish to add a second one and go quad SLI though you’d need to change the PSU to be able to run though. The card is EVGA branded and the runs at the standard GX2 clocks of 500MHz for the core and 600MHz for the memory (1,200MHz effective). 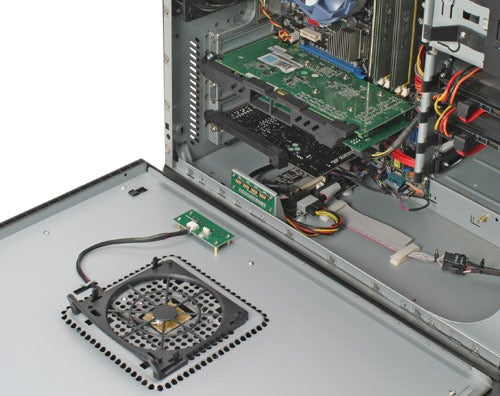 This is backed with 2GB of DDR2 system memory. It’s branded Patriot, which I must admit is one that I’ve never heard of, but at least it runs at 800MHz, which is more than could be said for the memory in the Dell XPS 700. There are two free slots too, so you could add more if required.

One unusual aspect in the interior is the that there’s a PCB with what looks like a SODIMM attached to the motherboard, which has been fixed to the base of the case. This is in turn attached to a PCB with some sensors that’s fixed to the side of the bottom frame of the case. There’s also a PCB attached to the inside of the removable case side along with a bracket for a side mounted 120mm fan. The contacts are there to provide power to the fan and the light under the alien head on the case side, without having to have a wire, which would be pulled off everytime you took the case side off. It’s a neat solution but Alienware did not actually choose to fit a fan in the side.


There are two PCI slots and one of them is filled with a Creative X-Fi Xtreme music sound card, which always makes games sound a treat. There are four side facing 3.5in internal drive bays each with pre-fitted screwless hard drive rails. Two of the bays are filled – each with a 250GB Samsung hard disk, which run quite quietly. External storage is provided by a dual-layer writer, though only one has been specified. Oddly, a floppy disc drive was included, but not a card reader – though you can easily add one at build-time. 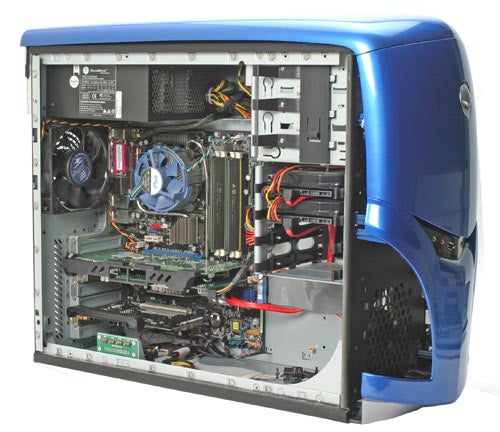 To finish off, a very impressive Logitech G15 gaming keyboard was supplied. This adds a real Star Trek feel to the Alienware thanks to its flip up LCD screen, a volume control wheel, numerous extra shortcut buttons and blue backlit keys. The Logitech MX 518 mouse supplied is also eqully solid.


The question is then, how does it all pull together? I compared it to its most recent rival, the Dell XPS 700, ironic considering Dell now owns Alienware. With the far better specification, the Alienware fairly blasted the Dell out of the way in our 3D SpodeMark tests. One exception in the 3D results was Prey, but that is almost certainly down to the fact that the graphics driver on the Alienware was slightly older and didn’t feature a profile for Prey, which meant it couldn’t use SLI to its full benefit. In our custom 2D benchmarks, which run both single and multi-core tests, the Alienware maintains a consistent lead ahead of the Dell, as one would expect of its faster CPU and memory combination.


Cost wise, this system is a lot more affordable than the near £4,000 that Alienware was asking for last time. At the time of writing I specced it up to be £2,758 – not cheap, but very similar to the Dell XPS 700, which I specced online to match the Alienware as closely as possible and got a similar figure. 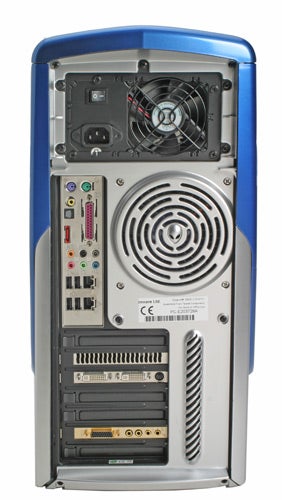 Of course if you want to go out and put your own system together then you will certainly be able to match the core specs for a lot less cash – I’d say at least £500 cheaper. But time, as they say, is money. You have to factor in the time it would take to build a system like this and the effort you would need to debug and troubleshoot it properly. And while you could get a pretty flash case, to get it to do the cool light show you’d have to mod it – pushing your costs and time investment up. Also included in the price is a two year warranty collect and return service and a 24 hour technical support line.


The Alienware is well built, well specified and fast, while it’s only a noisier than it needs to be because of power supply irks. It’s undeniably expensive, especially if you decide to compare to a self-built system and as such it can’t quite pick up a recommended award. However, when you take into consideration the improved Alienware design, the immaculate interior, the performance and the support package as a whole, this is a PC you’ll want to own. 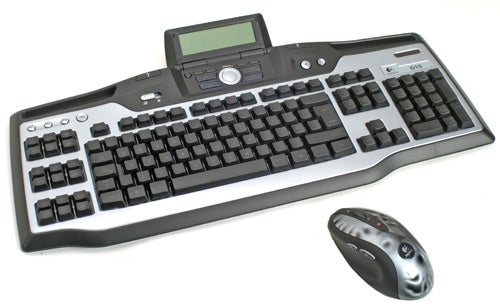