The words ‘gaming’ and ‘laptop’ are frequently used together, but they’re uncomfortable bedfellows. Aside from the long lost Zepto Znote 6224W, we can’t think of a single “gaming laptop” worthy of the description that weighed less than three kilos and came with a screen smaller than 15 inches. Alienware, which is really just a Dell sub-brand these days, looks to have broken this trend in the M11x.


This much we gleaned from our initial hands-on when the Alienware M11x was announced at CES earlier this year. Since then we’ve been itching to get our hands on it, counting the days in fact. When it finally arrived our expectations have proved justified. This 11.6in laptop, which weighs just a shade less than two kilos, delivers on its promise with great aplomb.


Leaving aside its gaming focus for the moment, the M11x’s most obvious contemporary is the Acer Aspire Timeline 1810TZ. It has the same size and resolution screen, has roughly similar dimensions and utilises the same Intel CULV range of processors. What it adds is dedicated Nvidia graphics and a little of the Alienware special sauce. Unsurprisingly it costs a good deal more – prices start at £748 and our review model would set you back £1,159, but you get a lot more too. 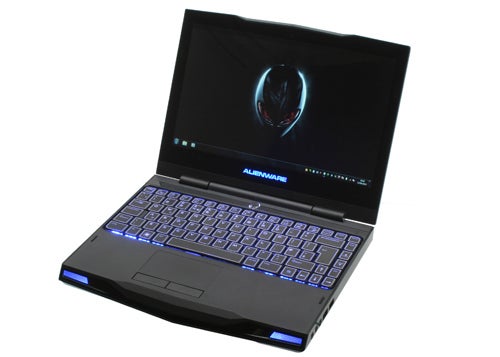 Powering our review unit is an Intel Core 2 Duo SU7300, which has two 1.3GHz cores that share a 3MB Cache. It’s not the only option, though, since you can also get the near identical Intel Pentium SU4100. Despite not having the Core 2 Duo moniker and aside from its smaller 2MB Cache, it has the same features and 1.3GHz core clock speed. Considering both can be overclocked to up to 1.73GHz (selectable from the BIOS) and will perform near identically, we’d save the £40 and get the SU4100.


In addition, we have 4GB of 800MHz DDR3 RAM, which is the minimum (and the maximum) we’d recommend on this system. What makes our system particularly expensive is the optional 256GB SSD, which is great if you can afford it but overkill for most people. Alternatively you can choose between 320GB and 500GB 7,200rpm hard drives, both of which bring the price to less than £900. Our preferred specification, which would feature the Intel Pentium SU4100 and 500GB hard drive, would currently set you back £868.99. A 320GB drive further reduces this to £829.00. 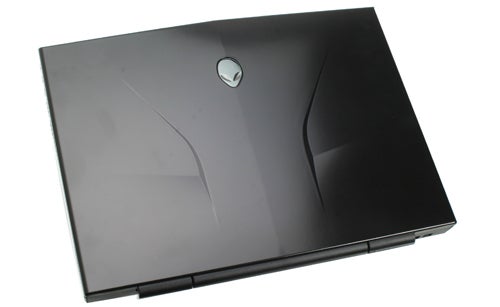 One thing that remains constant is the graphics card, which is an Nvidia GeForce GT 335M with 1GB dedicated memory. This chip sits near the top of Nvidia’s mobile graphics range, albeit not at the very top, but its ability to play games is the key component of the whole machine. Better yet the M11x can also switch to Intel’s integrated graphics to save power, giving you the best of both worlds. Unfortunately, at the moment at least, the graphics switching tech on the M11x isn’t the seamless experience offered by Nvidia’s Optimus technology – you have to select which GPU you want manually – but rumour has it this is likely to change later this year.

Lacking Optimus is obviously a disappointment and it’s not the only compromise to consider. As you may already have gleaned from the pictures there’s no optical drive on the M11x, while the battery isn’t hot-swappable. In the latter case the battery is hidden inside the machine and is screwed in. It’s still replaceable should it need to be, but it’s not as instantly accessible as on most laptops. 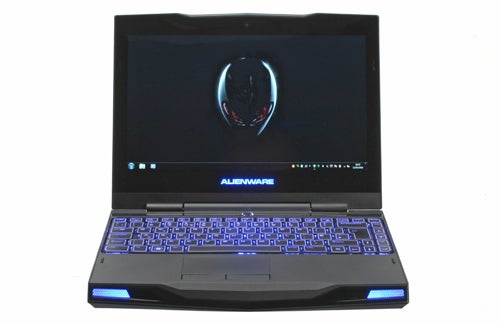 In the greater scheme of things, however, these are two things we can easily live with. Optical drives, while still useful, are far from essential these days – most games can be bought and downloaded online, as can a lot of video content. Should you desperately need a DVD drive, Dell still offers an external one as an option. With regards to the battery, you shouldn’t have much need for a second one anyway, as we’ll discover later.


Such compromises are made even more palatable because they make possible the wonderfully conceived chassis. We’ll concede that Alienware’s design language, its angular lines and chunkiness, won’t be to everyone’s taste but we rather like it. To us it has the right amount of unique, eye-catching design flair without alienating more conservative users. This is particularly true of the black version we have, though a silver option is available. 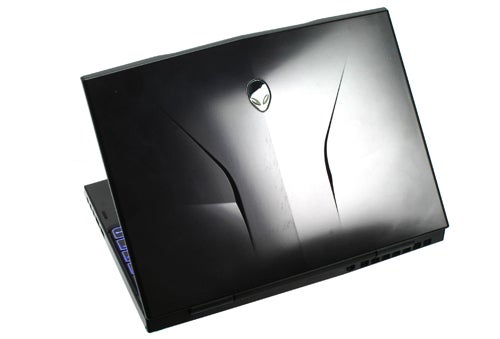 What really sets the M11x apart is the awesome AlienFX lighting system. Like the original Alienware m15x, you can customise each single element of the M11x’s backlighting system. This includes the keyboard, Alienware lettering below the screen, the alien heads above the keyboard and on the lid, and the two slots on the front edge of the machine. These can be set to a single solid colour, to morph between different colours or to ‘pulse’, though the latter two are no more than gimmicky distractions really. You can also turn off all lighting via a keyboard shortcut button.


If there’s one thing that we dislike about the design it’s simply the thickness (32.7mm) of the chassis. This is somewhat unavoidable, though, considering the cooling required for the graphics card and the space needed for that battery. Moreover, while thinness generally looks good, not having it doesn’t really impact on the portability of the M11x. Here weight is far more important and though 1.98kg is quite heavy for an 11.6in laptop, it’s not too hefty for regular mobile use.

Another more significant bugbear (partly related to the design) is the reflectiveness of the screen. Like many modern laptops the M11x has a clear plastic sheet across the screen. This may look good, but even by modern standards the reflections it creates are exceedingly irksome. This isn’t too great a problem in shade or when indoors, but you can forget about using the M11x in bright sunlight. Anyone particularly intolerant of reflections will find it a difficult machine to live with.

Given the premium nature of this laptop it’s no surprise to find some excellent connection options on it. Most notable is the presence not only of VGA and HDMI video connections, but also DisplayPort. One of the three USB ports also supports standby charging, which is always a useful feature to have on a laptop you’re likely to travel with. Mini-FireWire is present, as is the obligatory multi-format memory card slot. A trio of audio jacks (2x headphones, 1x microphone) can be found on the right edge, but the lack of an eSATA/USB combo port may disappoint some. 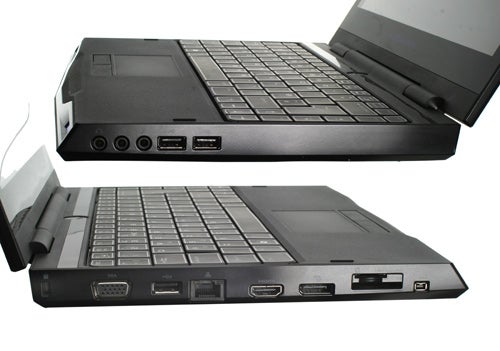 Intriguingly, just above the memory card slot is a SIM card slot. Our model didn’t have an HSDPA modem in it, though, and at present Dell UK doesn’t appear to offer this option. If you want his feature you’ll have to buy and install an HDSPA card yourself – we can confirm there’s space for one. Other forms of wireless connectivity are well covered, with both Wireless-N Wi-Fi and Bluetooth on-hand. Gigabit Ethernet is supported, too, should you need it.


This is also a machine you can work on fairly comfortably. Though the keys on the keyboard are a shade narrower than on most laptops, it’s still comfortable to type on. This fact is helped by a sensible layout and key actions that are crisp and well-defined, an asset that’s also beneficial to gaming. 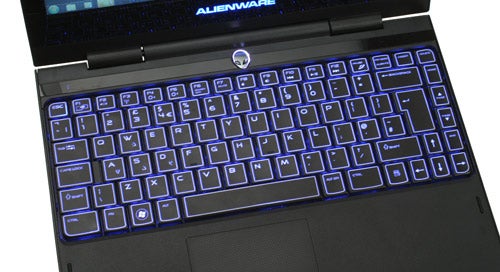 It’s unlikely you’ll use the touchpad for gaming often, but should you do so it’ll do the job well. It’s well-positioned, not interfering with typing noticeably, but is large enough not to feel cramped and awkward. We were particularly taken by the sharp, accurate action on the two accompanying buttons, though a little surprised to discover the pad itself doesn’t support multi-touch. At the very least, two-finger scrolling would be useful.


We’ve already touched upon the reflectiveness of the display, which is far from ideal, but aside from this the M11x screen is very good. Its 1,366 x 768 native resolution looks extremely sharp on such a small screen, while its colour and contrast are good by laptop standards. Viewing angles are quite narrow, but on a small laptop this isn’t a big problem and in some instances (e.g. working on a train/plane) the extra privacy might be preferable. 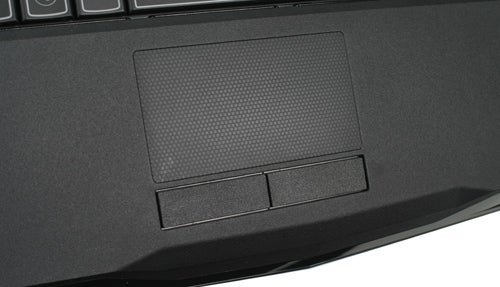 Unsurprisingly the speakers are very weak, a fact not helped by their relegation to random positions on the underside of the machine. Given this fact, their relative clarity is to be commended, but headphones and/or external speakers are still a must for regular listening.

Gauging the performance of the Alienware M11x was always going to be an interesting process. In the end we chose to compare against itself, running all our tests in both dedicated (orange) and integrated graphics (dark grey) modes where possible, and against the Samsung R780. In the case of the latter, its similar pricing provided an interesting comparison even though it’s nothing like as portable due to its 17.3in screen

In PCMark Vantage, the M11x performs well. This is boosted by the extremely fast SSD, though, which generated a massive score in hard drive intensive tests – as can be seen in the full results page at the end of the review. There’s a small difference in the overall performance with and without dedicated graphics, but the Samsung’s full-power CPU gives it an obvious advantage. Subjectively, and outside of purely CPU intensive tasks, the M11x’s general performance and responsiveness is very good and it should still be with a standard hard drive.


However, it’s gaming performance we’re really interested in here, and results were sufficiently impressive. Predictably Trackmania Nations didn’t pose a meaningful challenge, with a silky smooth 52.8fps when using the dedicated graphics compared to a slovenly 15.7fps on the integrated graphics. Our more demanding STALKER test, however, was particularly interesting. Not only did the M11x produce a decent 35.6fps, its result matched that of the R780.

To give us some further insight, we tried a few more games, including Call of Duty 4: Modern Warfare 2 and Just Cause 2. Running both at 1,366 x 768, we found MW2 ran very well indeed. Even on Extra Detail and with 2x anti-aliasing we got a smooth 45fps, leaving enough headroom for moments when the action got really hectic. Just Cause was more challenging, though, averaging around 25fps at medium settings and with no AA. It was still playable, however, which is impressive given that the massive draw distances and explosions make this a particularly challenging game.


Overall, while compromise is still necessary, provided you don’t exceed the native resolution (e.g. through connecting an external monitor) you can get playable frame-rates and still enjoy great looking games. For this machine’s purposes that’s just right.

This performance in games is made to look all the more impressive when you glance at the battery life on offer. Even on the dedicated graphics the M11x lasted a healthy 237 minutes (3hrs, 57mins), but switching to the integrated graphics extended this to a whopping 404 minutes (6hrs, 44mins). In recent memory only the Acer Aspire Timeline 1810TZ, which lasted 523 minutes (8hrs, 43mins), can better this.


We were also particularly impressed with the thermal performance of the system. Naturally, the fan spun up during games, but never did it get uncomfortably hot or outrageously noisy. Given the size of the machine and performance it offers this is an impressive feat.


Arguably the Alienware M11x is the first true gaming laptop. Not only can it play games well, it can be used on the move just like any normal laptop – more so than most, in fact, as its battery life is among the best in the market. We’d probably wait for it to be updated with Nvidia’s improved Optimus graphics switching tech, but nonetheless this is an outstanding (and unique) machine.