I’ve seen some pretty fast PCs pass through the TrustedReviews lab, but this system from Alienware is, without a doubt, the fastest machine ever to grace the pages of this publication. Anyone who knows Alienware will be aware that it has built its reputation on creating fast, beautifully built and downright desirable computers, and the Aurora 7500 continues that tradition.


It comes as no surprise that I’m reviewing this machine today, because at about 5am this morning AMD launched the Athlon 64 FX-60 – the fastest chip in its lineup – and that’s exactly what’s sitting inside the Aurora 7500. The FX-60 is, to all intents and purposes, two FX-55 chips in one package. So, what you have is two unlocked Athlon 64 cores running at 2.6GHz – a pretty formidable power source by anyone’s standards. Our own review of the FX-60 shows it to be a welcome successor to the FX-57, which although clocked faster, was only a single core chip. 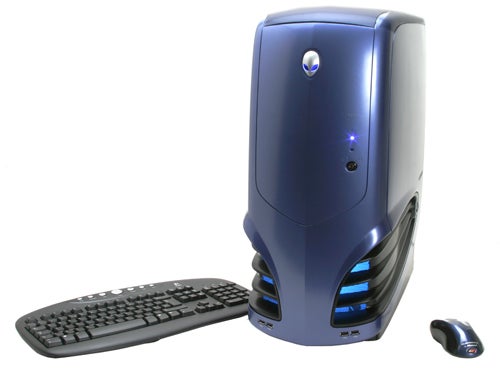 Alienware has made sure that the FX-60 has been surrounded by equally high-end components. The chip is sitting in an Asus A8N32-SLi Deluxe motherboard, complete with twin x16 PCI Express slots. This is a great motherboard and one that we liked when it was reviewed back in November. The chipset is cooled passively thanks to some good looking heatpipe equipped coolers – this helps keep overall system noise down to a minimum.


The Asus motherboard is stacked to the gills with features, including an external SATA port for high-speed external storage. There’s integrated 7.1-channel sound complete with optical digital output, but Alienware hasn’t made use of this, instead fitting a Creative X-Fi soundcard. It’s definitely good to see an X-Fi card in a gaming system, allowing the user to take advantage of the latest environmental audio effects. The list of games with native X-Fi support is growing, with A-list titles like Battlefield 2 and F.E.A.R. taking advantage of Creative’s new baby.

If there’s one downside to the Asus A8N32-SLi Deluxe it’s that the BIOS won’t let you change the CPU multiplier. In most cases this wouldn’t be a problem, but considering there’s an FX chip in this machine, it’s a bit of a shame. One of the big selling points of the FX series is that they’re unlocked, allowing the end user the option of overclocking. That said, there will probably be a BIOS update soon to resolve this problem and it’s not like the Aurora 7500 is slow as it is.


All four DIMM sockets on the motherboard are occupied – there are four 512MB modules for a total memory complement of 2GB. We’re definitely getting to the stage where 2GB is necessary for a high-end gaming system – titles like Battlefield 2 need as much memory as possible, even if you have a high-end CPU and graphics card. That said, considering the rest of the spec and the price of this machine I would have liked to have seen four 1GB modules in place, although you can always spec more memory at purchase if you think you’ll need it. 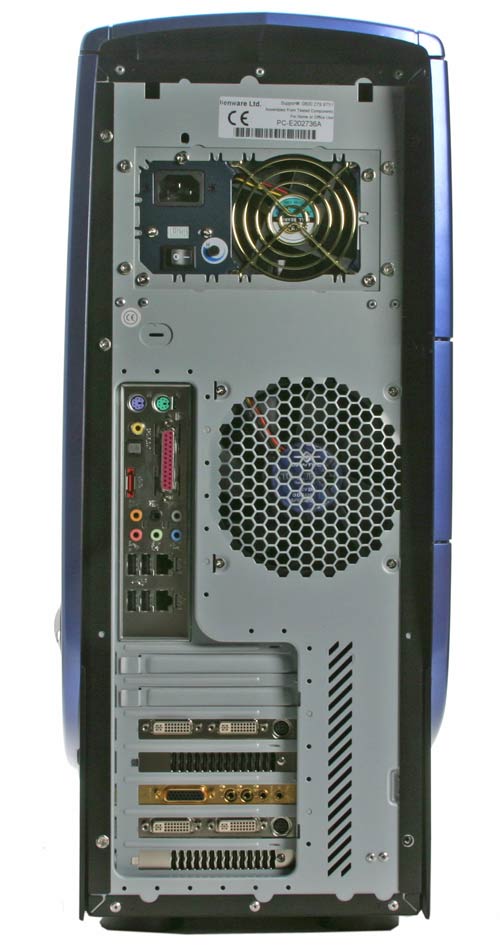 Complementing the cutting edge CPU are a couple of white hot graphics cards courtesy of nVidia. The 512MB GeForce 7800GTX is a lightning fast graphics solution, but when you put two of them together you’ve got a truly awesome gaming platform. The twin x16 PCI Express slots in the motherboard create the perfect home for the two 512MB 7800GTX cards, and the large heatpipe coolers on the cards keep noise down despite the performance they provide.


Talking of noise, it amazed me how quiet the Aurora 7500 is. Alienware has fitted a heatpipe Thermaltake CPU cooler to the FX-60, which is pretty quiet in operation. There’s a 60mm fan in the side panel pulling in cool air, while a large 120mm rear fan pumps the hot air out again. Non of the fans spin particularly fast so they don’t make a huge amount of noise. Alienware has also stuck sound insulation cladding to the inside of the case. Obviously when you fire up a demanding game the fans spin up, but even then the Aurora 7500 isn’t that noisy. 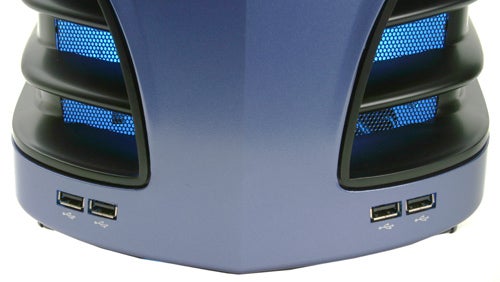 The high-end specification stretches to the storage as well. Alienware has installed a total of three hard disks in the Aurora 7500 – two of these are 250GB units that have been striped into a RAID 0 array. The RAID array is used as the system boot volume, while the second drive is configured as a data volume. Now, you’d expect the third drive to also be a 250GB unit, but Alienware has instead installed a 500GB drive. This means that if you were worried about data integrity your could backup the entire boot volume to the third disk. Personally I would just make sure that all my data is kept safe on the third half-terabyte drive, so if the RAID array did ever fail I’d just have to reinstall Winodws and my applications. 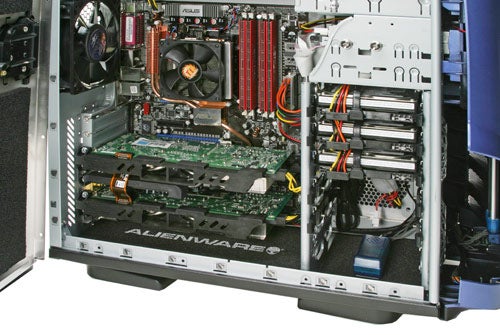 All three drives are mounted on quick release drive rails and there are two more bays below, with the rails already in place for future upgrades. There are four 5.25in bays on offer, two of which are already filled. Alienware has installed an NEC ND-3550A DVD writer in the top most bay – this is a great drive, although the more recent ND-4550A would have been preferable with its DVD-RAM support. Bizarrely Alienware has also included a CD-RW drive – I can’t really understand why this is here since the NEC DVD writer will happily burn CD-R and CD-RW media as fast as you’d ever need it. In fact I can’t even remember the last time I’ve seen a bog standard CD-RW drive. Finally, one of the two 3.5in bays is filled with a floppy drive – although this may seem strange at first, if you’re using a RAID array as your boot disk it’s always handy to have a floppy drive.

As is usually the case with Alienware, the build quality is exemplary. All the cabling from the 600W Enermax power supply is routed pristinely, with no loose or errant cables spoiling the view when you rip the side off the case. The SATA cables for the hard disks are also routed cleanly, with excess cable length folded tidily out of sight – other PC manufacturers could learn a lot about build quality just by looking inside the Aurora 7500. If there’s one issue with the build of the Aurora 7500 it’s the actual system case – although the classic Alienware tower still looks pretty good, it is getting abit long in the tooth now. Perhaps a replacement case built from aluminium instead of plastic would inject a new lease of life into Alienware systems. That said, the blue lights behind the grille at the front and the glowing blue eyes in the alien head do look good with the lights down. 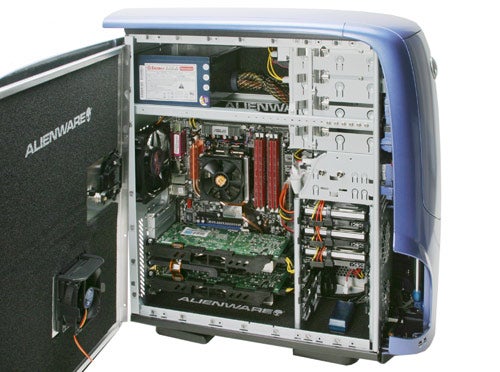 It’s also worth mentioning that the front, lockable door on the case also seems to help keep the system noise down. There are four front mounted USB 2.0 ports at the bottom, which are quite useful – of course if you place the tower on the floor they will be tricky to get to. I would also like to see some front mounted audio ports on the new Alienware system case when/if it arrives.


Alienware continues its slightly odd tradition of shipping a mix of Logitech and Microsoft input components. The Alienware branded Microsoft mouse looks good, finished in metallic blue – I actually find Microsoft mice to be too large, but I know many people who find that they fit their paws perfectly. The Logitech keyboard is a basic affair and it looks a bit dull finished in matt black compared to the bright blue system case and mouse. Personally I prefer Microsoft keyboards and Logitech mice, but you can’t please everyone.

Also bundled in the box is a set of Alienware Ozma 7 headphones. These headphones offer a reasonable surround envelope and pretty clean sound when listening to music. However, they do add a substantial £130 to the cost of the system, and any gamer is going to be more interested in a decent stereo headset than a set of headphones. In fact Alienware offers a Sennheiser headset for a far more reasonable £43 – I know which one I’d go for. 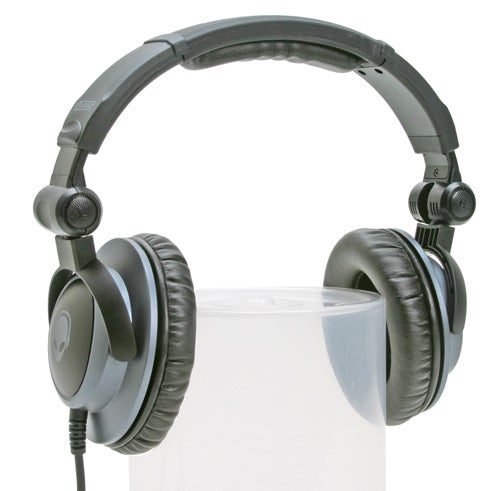 But the really important thing with a machine like this is how fast it is and on that count it delivers in spades. I’m not even going to bother talking about low resolution stuff because anyone running a resolution lower than 1,600 x 1,200 on a machine like this deserves to be shot. Let’s kick off with Doom 3 at 1,600 x 1,200 with 4x FSAA and 8x AF – the Aurora 7500 turned in a score of 124.5fps! That’s a truly amazing score and an indication that perhaps you need to look higher than 1,600 x 1,200 to get an idea of this Alien’s ability.


I loaded up F.E.A.R. which has a habit of bringing fast PCs to their knees. I instantly cranked the resolution up to 1,600 x 1,200 with 4x FSAA and 8x AF and the gameplay was silky smooth. I played for a while, marvelling at just how fantastic this game looked – the dust and smoke looked particularly superb and added masses of atmosphere to an already atmospheric game. I pushed things up to 2,048 x 1,536 and I finally started to see the Aurora 7500 struggle – with no image quality turned on it still managed 78fps,but once you turned on 4x FSAA that number dropped to mid 30s. That said, if you settle for 2x FSAA and 4x AF F.E.A.R. is still completely playable at 2,048 x 1,536. 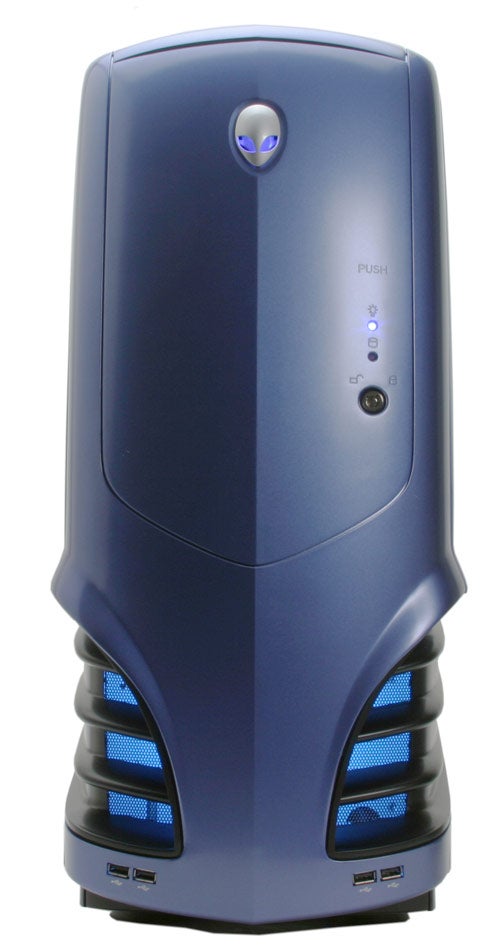 Of course the only aspect of a machine like this that’s as important as performance is price, and you’re going to have to be very flush to afford this baby. Alienware quoted me a price of £4,206 for the Aurora 7500, which I’m sure you’ll agree is an astronomical price tag. Of course for that price you are getting one of the fastest machines on the planet, with a plethora of top quality components coupled with beautiful build quality.


Basically, the Alienware Aurora 7500 is like a Bugatti Veyron – you’ll need to be a Premiership footballer to afford one, but you’ll have something very special sitting in your garage, I mean study.


This is a staggeringly fast PC along with an equally staggering price point. But if you happen to be earning thousands of pounds a week and want to relax playing some games after the gruelling Christmas schedule and FA Cup ties, the Aurora 7500 is definitely worth a considering.