Alienware is still fairly new to the UK market and up to now has stuck to its guns and produced only very high-end, and very expensive, machines. But Alienware is not only well known for the high-end nature of its systems, but also for its large, stylish cases.


That’s why I was both pleased and disappointed with the Aurora 5500. Sure, £1,399 is not bargain basement, but it does at least make an Alienware machine accessible to more people. On the downside, when I unpacked the Aurora 5500 I couldn’t help but be disappointed by the look of the case. 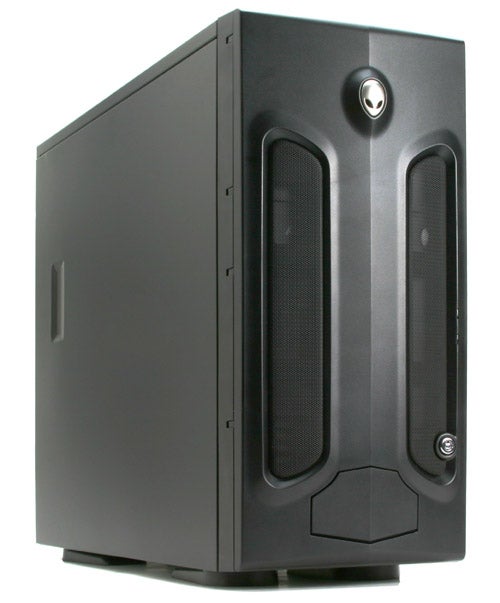 But, of course, looks are only skin deep and it’s what’s inside that really matters. Even though the Aurora 5500 is Alienware’s new entry level AMD powered system, it’s still more like a high-end system from other system integrators. But let’s start with taking a closer look at the case, since it’s very different from what we’ve seen in the past from Alienware.


At first the new housing looks like a small server case, which I’m fairly sure it’s based upon. It’s shorter than the standard Alienware case and as such has less room for drives. A small flap on the dual hinged door enables access to the front mounted ports without having to open the door. Behind the flap are two USB 2.0 ports, a single six-pin FireWire connector and a headphone and mic socket. Having a dual hinged door means that it can be opened in a way so it’s flat against the side of the case, and as such it’s not really in the way.


Open the door and you’re greeted by a large fan-duct housing a 92mm fan. This doesn’t add to the aesthetics of the machine, but as long as you keep the door shut, you won’t really see it. Above the fan are three 5.25in drive bays, one housing a DVD writer and one the floppy drive. This is placed in 5.25in bay via an adaptor as there are no external 3.5in drive bays. A neat touch is that smaller memory keys or similar devices can remain plugged in while you open and close the door as long as you remember to open the front flap. 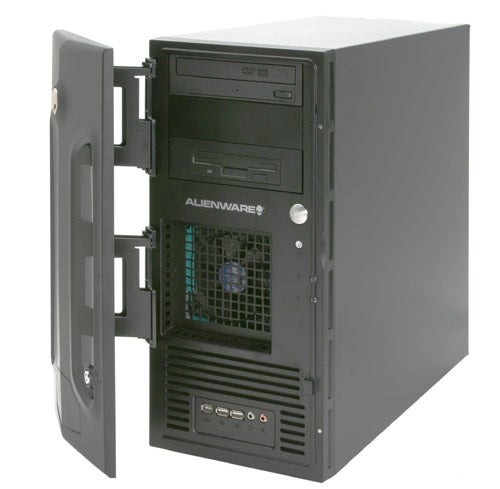 Take the side of the case off and you’re greeted by a very tidy machine, something that adds to the overall quality feel of the Alienware PCs. The hardware isn’t bad either. The processor is a 3800+ Athlon 64 (single-core) and this has been paired with 1GB of PC3200 DDR memory but the heatsinks are Alienware branded. For some reason the latency of the memory wasn’t set as low as it could have been, (CAS 2.5 rather than CAS 2.0), so there’s an opportunity for a slight performance boost by tweaking this.

The motherboard is from Asus in the shape of the A8N-SLI Deluxe, which as the name suggests is an SLI motherboard. However, there is only one graphics card installed, although for most this is going to be more than plenty as it’s a 7800 GTX card from XFX. Having a second slot as an upgrade path is great, but I have to point out one major flaw of the Aurora 5500 here and that is the PSU.


Normally I wouldn’t complain about a 460W PSU, but if you were to add a second 7800 GTX card you would require two PCI Express power connectors. However, the Enermax PSU is rather old and doesn’t have any. Alienware has used an adaptor for the current graphics card, but it’s impossible to fit a second one using this PSU as there aren’t enough spare power connectors for another one – something of a flaw in a supposedly SLI ready system. Also worth mentioning is the fact that nVidia recommends 500W PSUs for dual graphics cards, although depending on your system configuration you could get away with less, so 460W might still be good enough. 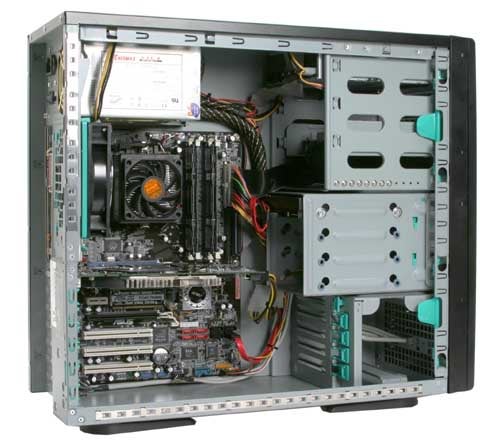 The hard drive is a 200GB SATA unit from Western Digital with 16Mb of cache while the optical drive is an NEC ND-3540 DVD writer which you can find a full review of here. Apart from this there’s very little to mention apart from the 7.1-channel AC97 audio courtesy of the Asus motherboard.


I’m not overly keen on the internal workings of the case either. Let’s start with the good. The rear 120mm fan is definitely a good thing and both of the case fans are low noise models from Vantec. There’s also room to fit another three hard drives – all cooled by the front mounted fan. 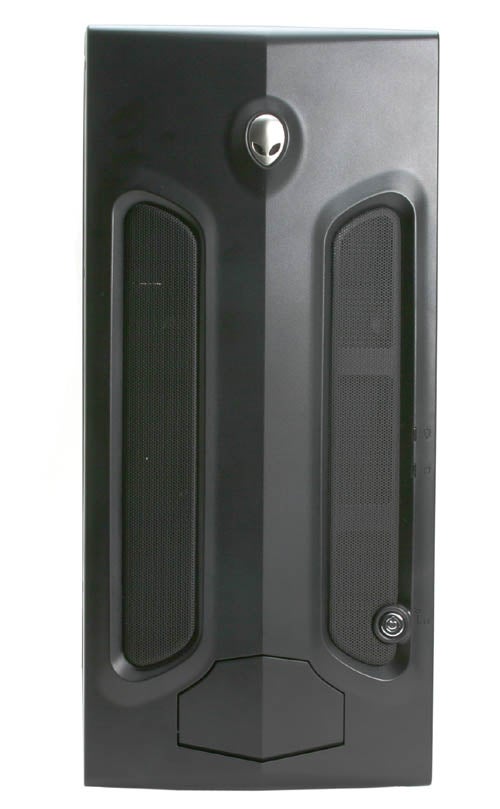 On the upside, you won’t need a screwdriver to fit any new expansion cards thanks to a screwless mechanism that consists of a small lever for each rear slot. The only card fitted is the graphics card and no rear brackets have been installed. However, Alienware has supplied all of the motherboard accessories in the box, so if you want to use any of the extra brackets these can be installed at your leisure.

The Aurora 5500 doesn’t come with a monitor as standard, but it comes with a Logitech Internet Pro keyboard and a very basic optical Microsoft mouse – which happens to be called Basic Optical Mouse 1.0A – which most gamers will throw in the bin the second they see it. The Aurora 5500 ships with a fUnc Industries fUnc sUrface 1030 mouse mat which felt very good during the time I used it. The mouse mat has two usable sides two it, rough and smooth, so you can flip it over depending on your preference and it fits inside a rubber surround which means that it sticks to the desk. It even comes with a small clip that holds your mouse cable in place. 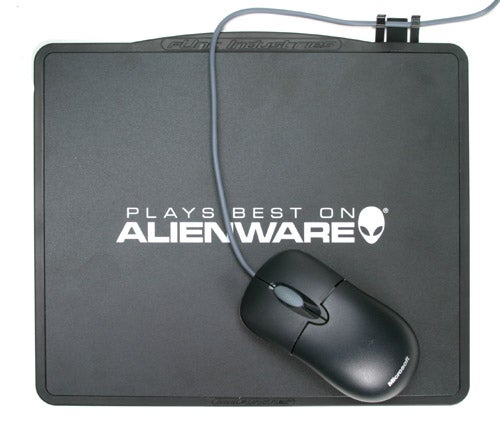 A cool feature is the skinning software that comes with the Aurora 5500 which enables you to load up one of four different Alienware skins on Windows XP, which makes it look quite funky.


Performance wise there’s definitely nothing wrong with the Aurora 5500, but you would get more out of the graphics card with a faster processor. With an overall SYSMark 2004 score of 181 there won’t be any issues running day to day software. But I wouldn’t imagine anyone buying this machine unless they’re going to play games on it, so what really matters here is the game benchmarks.


It really comes down to the type of display you intend to use with the Aurora 5500 and what level of anti-aliasing and anisotropic filtering you want enable, but it won’t even break a sweat up to 1,600 x 1,200. Beyond this it starts to struggle slightly when you enable 4x FSAA, at least if you expect to see 60+ FPS in games. Comparing it to the higher specced, but more expensive, Mesh Xtreme Essential TRX you can see that the Aurora 5500 is actually faster in all of the 3D benchmarks. This is down to the Aurora using a single core processor that’s faster in games than the lower clocked dual-core chip used in the Mesh. 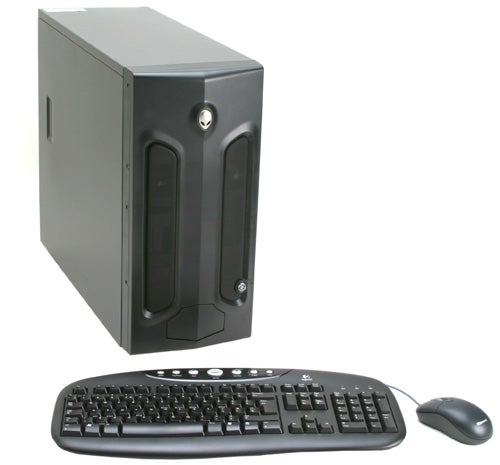 At £1,399.00 including VAT plus delivery, the Aurora 5500 isn’t cheap, but it’s not over priced either. However, I have some reservations about the configuration we received from Alienware, especially with regards to the PSU. This isn’t the best system we’ve seen from Alienware, but it’s a lot more affordable than previous machines, which goes some way to making up for that. Still, I’m a sucker for the nice big Alienware cases and this new mid-sized case just doesn’t do it for me.


The Alienware Aurora 5500 offers good performance, a fast graphics card and the Alienware touch. But the new case isn’t cool enough and the poor choice of power supply is disappointing. However, if you want an Alienware PC on a budget, it’s not bad value.


For an extra £32 you can get the normal case from Alienware instead of the one reviewed. An SLI PSU is also available as a cost option if you’re planning to upgrade at a later stage.