How powerful is the Alienware Area 51m?

The Alienware Area 51m is one of the most powerful gaming laptops available, not only giving you the option of Nvidia’s most powerful mobile graphics cards, but also supporting desktop Intel processors for a obscene performance in a portable.

I was given one of the most powerful configurations of the Area 51m to test, as it sported an RTX 2080 graphics card, an Intel Core i9-9900K processor and 32GB RAM. This exact model costs £3799, so you’re going to have to stump up a lot of cash to replicate our findings. Cheaper and less powerful versions of this gaming laptop are available though, with the cheapest configuration costing £1949. 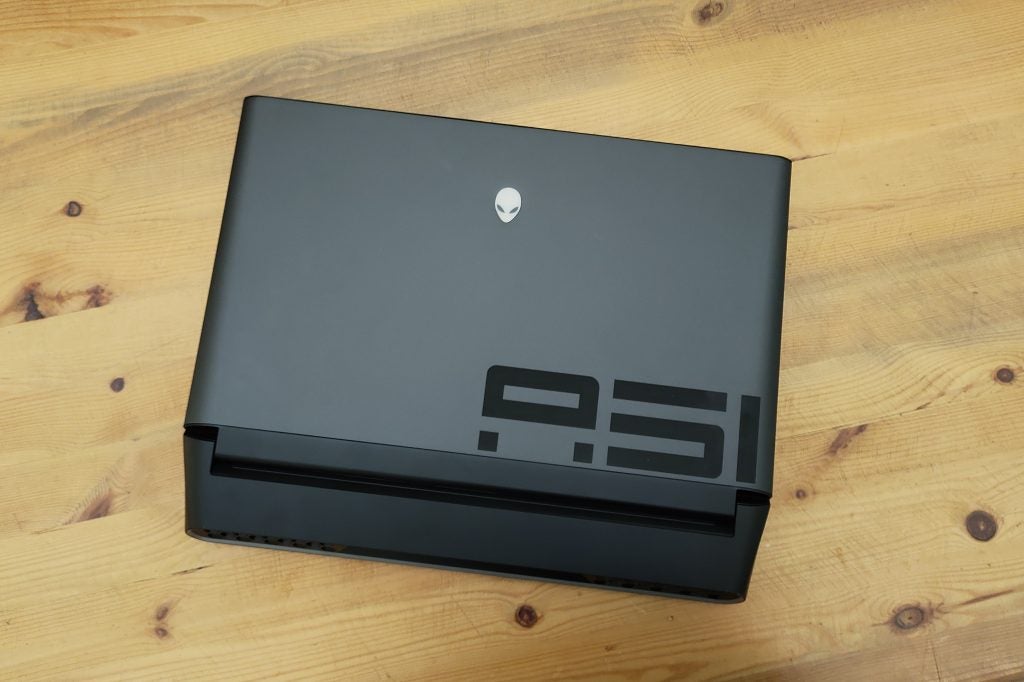 In order to get an idea of how impressive the GPU grunt of the Alienware Area 51m is, I compared it to the most powerful gaming laptop we’ve tested to date: the Acer Predator Helios 700.

The 3DMark Fire Strike is a good benchmark starting point, providing a synthetic score of the raw strength of the laptop’s GPU power. A result of 22,118 was the highest score we’ve ever seen on laptop, beating even the Acer Predator Helios 700 be a fair distance.

Of course, synthetic benchmark tests don’t provide an accurate reflection of real-time game performance, so I also used three in-game benchmarks to get a better idea of how high the graphics cards can push up frame rates.

The three titles I chose were Shadow of the Tomb Raider, Ghost Recon: Wildlands and Dirt Rally. I picked the former two as they’re two of the most GPU intensive titles currently available, while Dirt Rally is a good example of a less GPU-demanding game that was released a few years back.

Out of the box, the Area 51m edges out the Predator Helios 700 in terms of video game performance. That said, the 1fps is so tiny you definitely won’t be able to detect a difference with the naked eye. That’s even true with Dirt Rally, as the frame rate is so high with both laptops that any further increase is hard to notice.

Interestingly, the Area 51m lost its advantage when it came to overclocking. Both laptops feature overclocking profiles which you can activate to a get a boost in performance.

When activating this profile, I believe thermal throttling began to effect performance, especially since the Shadow of the Tomb Raider frame rate actually declined instead of improving. In comparison, the Helios 700 excelled in overclocking thanks to its slide-out keyboard which gives the fans more airflow to dispel heat. This is probably the one major advantage the Helios 700 has over the Area 51m, but again, the frame rate advantage was only minuscule.

While I only used Alienware and Acer’s own overclocking profiles, it’s actually possible to perform your own manual overclocking. This is only recommended if you know what you’re doing though, as it’s possible to fry the components if you’re not careful. Still, the capability for pro overclocking to do this on a laptop is certainly exciting.

One of the most shocking features of the Alienware Area 51m is its compatibility with desktop processors, so it’s not limited by the constrained performance power of mobile variants.

This gives the Area 51m incredibly speedy processing power, which not only means games load quickly and run smoothly, but also ensures you can zip through applications, web browsers and even intensive media editing software without a moment of stalling.

CPU benchmark tests showed the extent of the processing advantage the Intel Core i9-9900K desktop processor gives the Alienware laptop. The Acer Predator Helios 700 unit we tested boasted an Intel Core i9-9980HK, which is the fastest laptop CPU we’ve ever benchmarked, so it’s certainly no slouch. Despite this, the Area 51m absolutely decimated it in both PCMark 10 and Geekbench 4 benchmarks.

The Area 51m desktop processor can even be upgraded, but there currently isn’t a CPU more powerful than the Intel Core i9-9900K available. Intel is likely to launch the 10th Generation Intel Core CPUs soon, but there’s no guarantee they will support the 115X socket inside the Area 51m. If so, you’d have to replace the entire system board inside the laptop, which is possible, but would be a right faff.

Without overclocking, the Alienware Area 51m is the most powerful gaming laptop on the market. It narrowly beats the Acer Predator Helios 700 in terms of both GPU grunt and in-game frame rates, and absolutely trounces its rival when it came to CPU processing power.

The biggest ace the Area 51m has over its rivals, however, is the capability to be upgraded. There are certain doubts whether Alienware’s promise to users will come to fruition, with a large dependence on Dell’s proprietary graphics cards and the hope that future Intel processors will still support the 115X socket. If these issues can be addressed, then the long-term value of the Area 51m will be second to none.