What is the Alienware Area-51 Threadripper Edition?

The latest machine from Dell’s high-end gaming brand is a beast. The Alienware Area-51 Threadripper Edition tips the scales at 28kg, it comes in a vast triangular case and, as usual, is littered with lights.

It’s hardly cheap, at £5169 – but the price is high for a good reason. This new incarnation of the Area-51 includes two GTX 1080 Ti graphics cards and AMD’s range-topping Threadripper processor.

The Area-51 makes quite the first impression. It’s 569mm tall and 272mm wide, and most of the front panel is covered with slats of dark, glossy plastic. RGB LEDs ring the slatted section and sit on the side panels, and the front has the familiar Alienware logo as its power button.

Each point of the triangular case is bolstered by a metal handle that makes it easier to tilt the machine to get at its various ports and sockets. Build quality is superb, which is to be expected from a PC of this size and price. The metal used throughout the case is solid, and the plastic, too, is sturdy.

This is all good news, but the Area-51 Threadripper remains a difficult machine to live with. The sheer size of this rig precludes it from easy travelling to LAN parties and gaming events, and the awkward shape makes it trickier to store neatly beneath a desk than a conventional tower. 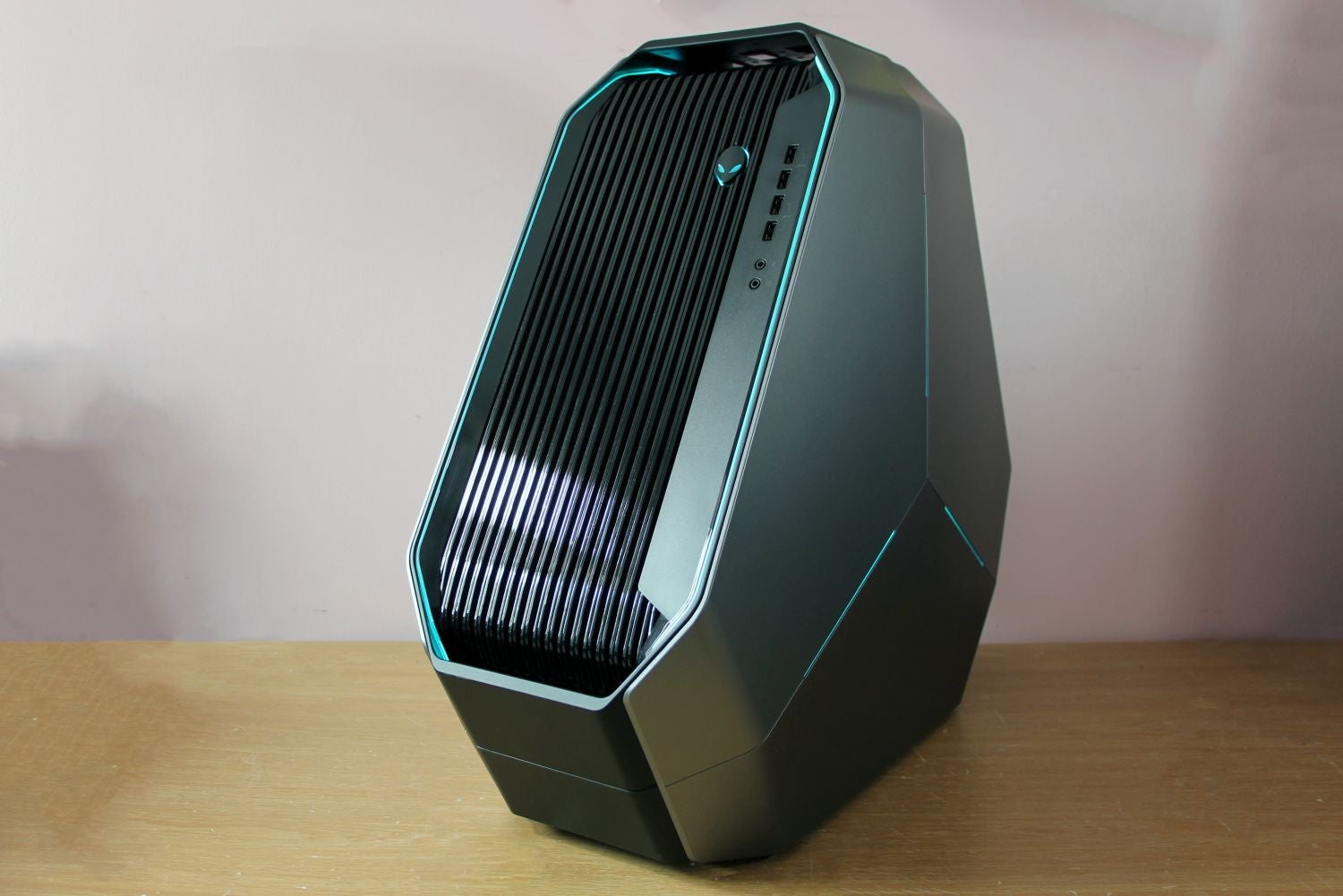 It’s disappointing on the inside, too. The processor is topped off with a bulky 120mm water-cooler with a single 120mm fan, and the two graphics cards are plastic-clad models that look very much like bog-standard reference units. The motherboard is basic, with no RGB LEDs, snazzy heatsinks or extra features.

The power supply is an ugly metal box, and the majority of the cables are multi-coloured. Placement of these cables isn’t neat, either – they cluster across the case and sit in a huge bundle towards the bottom of the chassis. 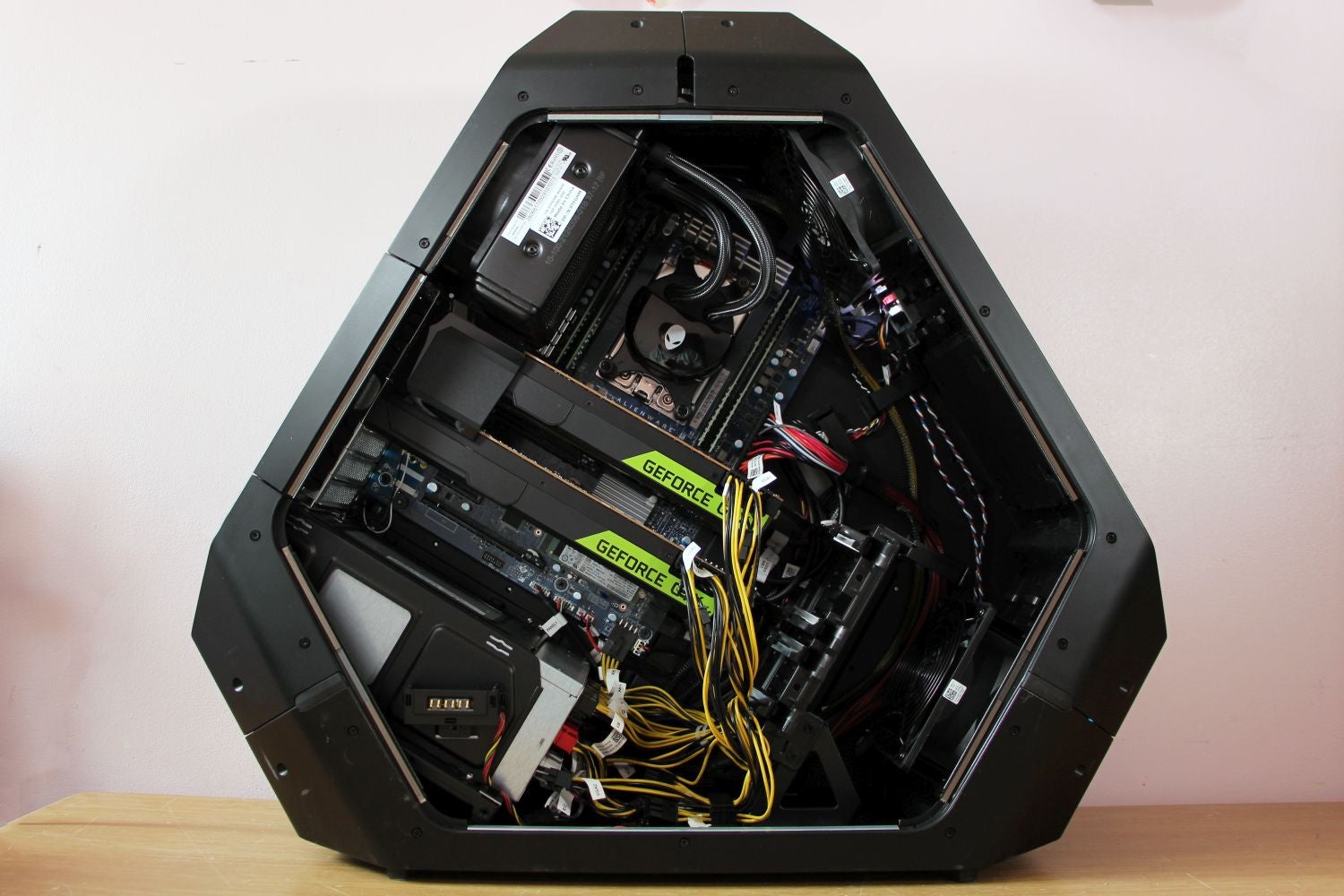 The only real opportunity for expansion is at the rear of the case, where you’ll find three hard disk bays and one 2.5in slot complete with pre-installed cables.

Since the Alienware’s side panel doesn’t have a window, having a neat or eye-catching interior isn’t necessarily a priority. However, this is still a high-end PC with a significant price tag – and, as such, I’d expect better. 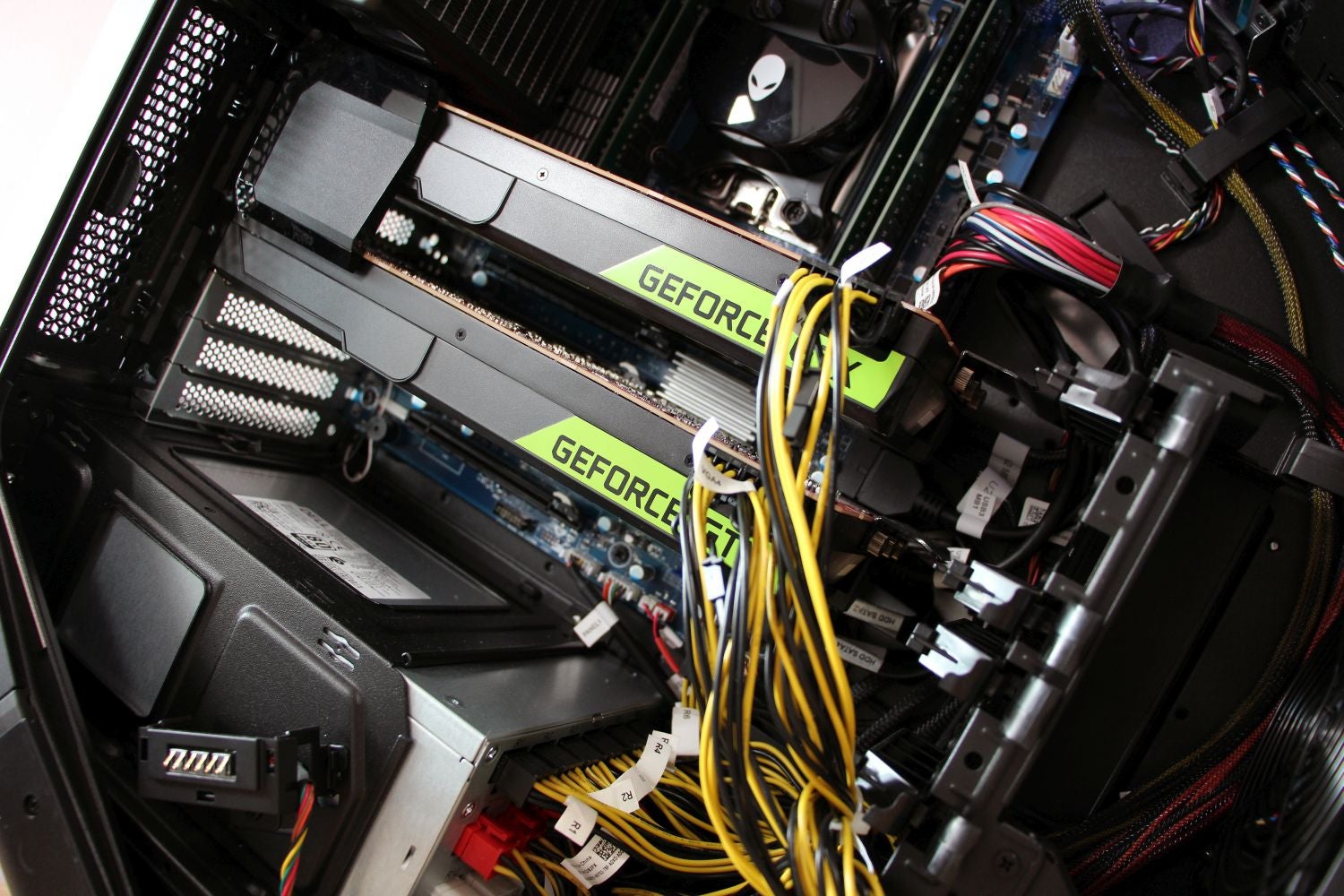 Rivals do a better job than Dell. Take the Asus ROG GT51CH, which was the last big-brand gaming system I reviewed – the interior is neater and offers more upgrade room for storage and memory. Even the tiny Corsair One Elite manages to be smarter and cleverer in a comparatively tiny amount of space.

You could also go one better by investigating local PC firms such as Scan, Chillblast or Cyberpower. Those companies build systems with similar specifications to the Alienware at comparable or lower prices. Plus, for that money you’ll get better-looking, more conventional cases with bespoke water-cooling and much more upgrade room.

As ever, the Alienware Area-51 Threadripper Edition is controlled by the familiar Command Center app. This tool can be used to tweak the colours of the system’s RGB LEDs as well as configure lighting modes for individual games.

The Alienware’s star component is undoubtedly the Ryzen Threadripper 1950X. It’s the range-topping chip from AMD’s barnstorming 2017 architecture, and it has a huge 16 cores that support 32 concurrent threads.

The 1950X doesn’t just offer a huge core count. Its stock speed of 3.4GHz is solid, and it improves to 4.2GHz with Turbo boosting. It has 32MB of cache, and the core Threadripper architecture – which means quad-channel memory support and better Precision Boost turbo performance.

There isn’t a  game out there that will require the need for a 16-core processor. Instead, the 1950X is geared towards complex work tasks such as video production, CAD design, content creation and databases. To help productivity, the Alienware has 64GB of 2,666MHz memory – again, a generous amount that only the most demanding applications will require. 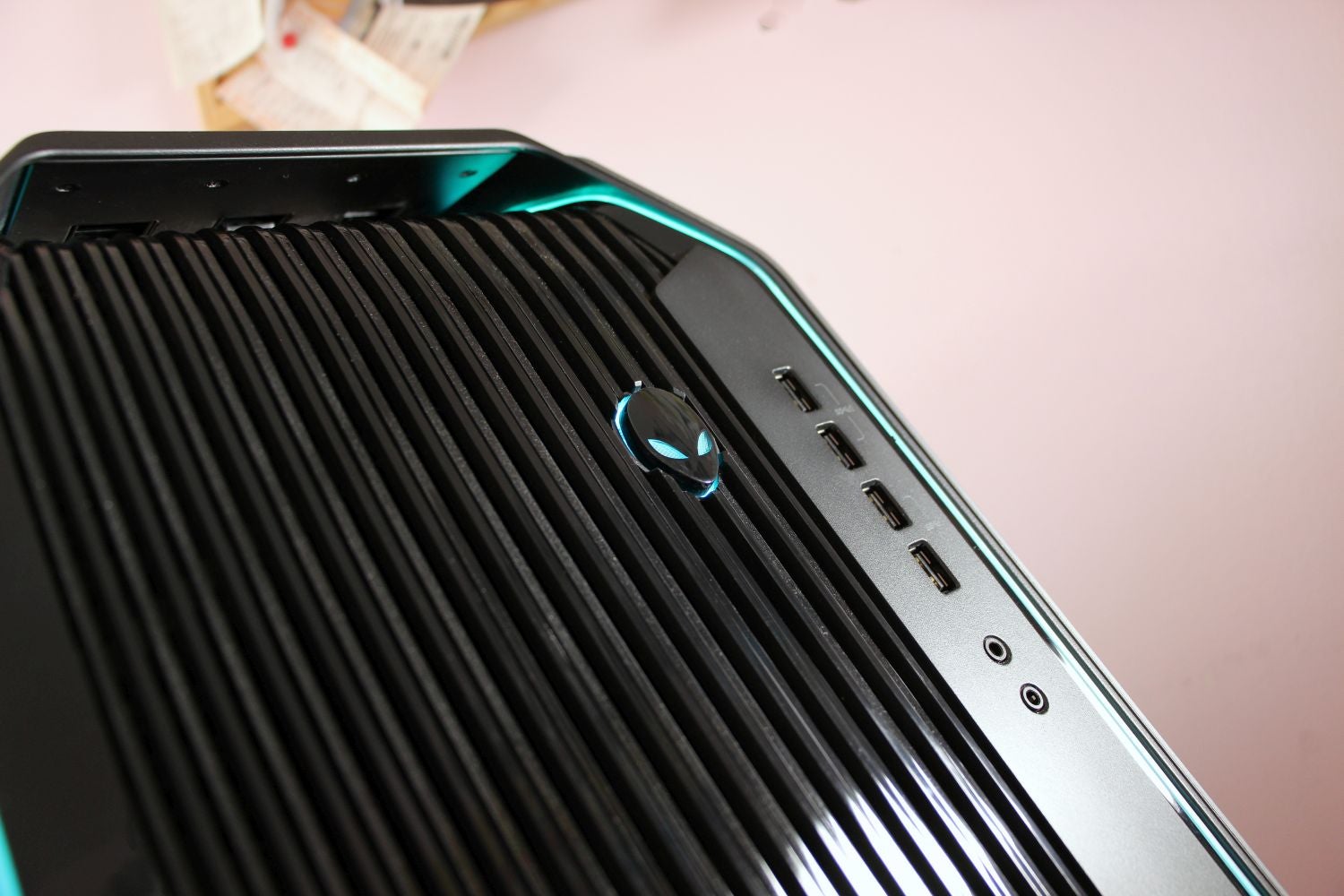 The 1950X outpaces any other such PC I’ve seen recently. The Corsair One Elite had the Core i7-8700K, which has six Hyper-Threaded cores. Threadripper isn’t designed to take on those chips, however. Instead, it’s supposed to challenge the Intel Core i9 range. Those parts begin with the 10-core i9-7900X, and accelerate to the range-topping 18-core i9-7980XE.

The 1950X sounds great on paper, then, but in practice it’s actually a little underwhelming. Take its multi-core Geekbench result: its score of 26,353 is record-breaking, but it’s only around 3000 points ahead of the Corsair One Elite and its i7-8700K chip.

Threadripper’s concentration on a huge core count also means its single-core performance suffers. Its single-threaded Geekbench result of 4024 is more than 1000 points behind the Corsair and is about level with the Ryzen 7 1800X. The Alienware scored 4184 in PCMark 8 – another result that lags behind its cheaper rivals.

It’s an interesting set of results, but it reveals a tricky conundrum about AMD’s latest chips. The 1950X may have more cores than almost anything else, but there are only a handful of applications that will truly make use of them.

Graphical grunt comes from two Nvidia GeForce GTX 1080 Ti graphics cards. Between them, the range-topping GPUs deploy 7168 stream processors and 22GB of GDDR5X, so there’s no shortage of power on offer.

The two graphics cards will play any new game at 4K without breaking a sweat. The two cards will also handle the market’s raft of VR headsets, widescreen panels, high refresh-rate screens and multi-monitor setups. They’re great for work, too, with enough power for video production and other graphical applications. 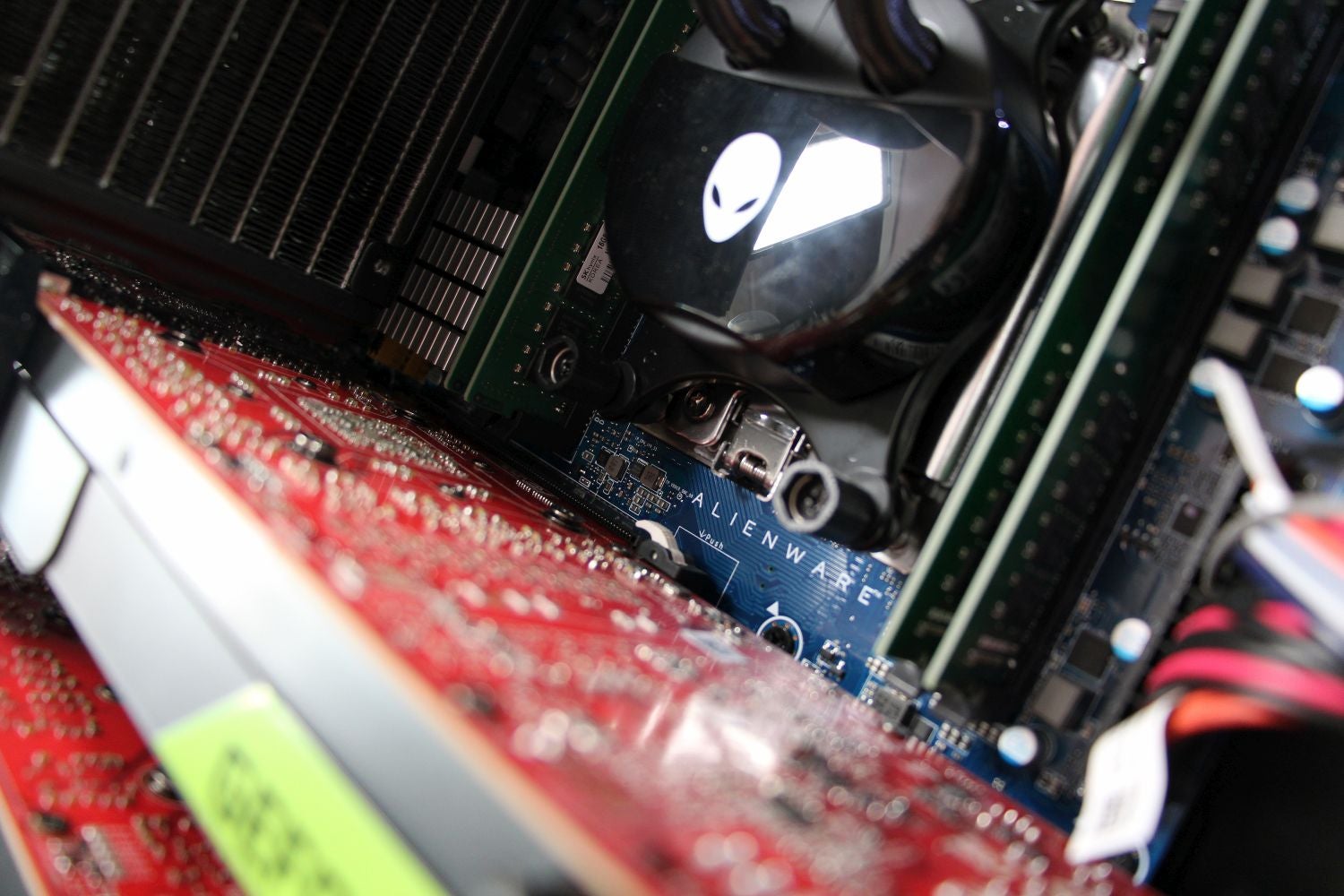 For more evidence of the Alienware Area-51 Threadripper Edition’s raw performance, look to 3DMark. In the Fire Strike Ultra test the Alienware scored 12,479. The Corsair could manage only 7075.

There’s plenty of grunt – more than the Corsair with its one GTX 1080 Ti, and more than the Asus ROG GT51CH, which has two GTX 1070 GPUs. However, the big-brand Area-51 will once again fall behind machines made by local, specialist builders. If you had a system from Chillblast, Scan or PC Specialist with two GTX 1080 Ti cards, they’d almost certainly be overclocked models.

You’re also not getting flawless scaling with these two GPUs – a common issue with SLI. Remember, too, that Intel-based chips with the same GPU configuration will be even faster in games.

The Area-51 delivered reasonable thermal performance. Its CPU and GPU peak temperatures 65°C and 84°C are fine, and in most situations the rig was quiet. If you’re not pushing the components, you probably won’t be disturbed by the system’s low, almost inaudible rumble.

Push the key components with tough gaming tasks or high-end work applications, however, and the quiet whirr becomes a loud, low rumble. It’s won’t be a huge issue if you’re gaming with a headset or speakers, but it will be noticeable in a quiet office. It’s also far louder than the Corsair, or many of the machines produced by British firms. 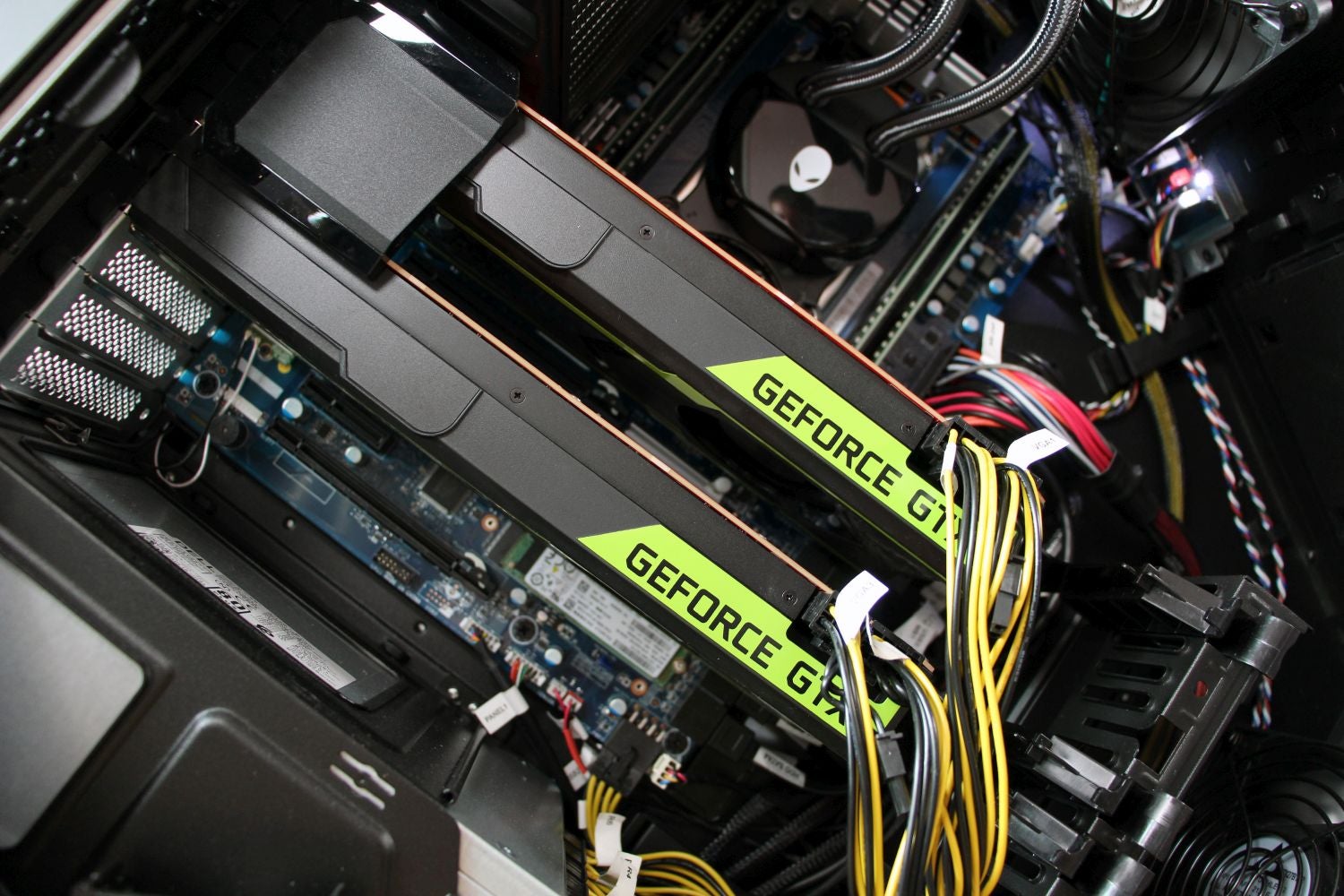 The main components attach to a plain Alienware 08FN1W motherboard. It doesn’t have any free memory slots or PCI sockets, and it doesn’t serve up high-end extras such as on-board POST displays, buttons or RGB LEDs. It has 64GB of 2666MHz memory, which is a huge amount for work applications but overkill for most people.

Storage comes from a 512GB SK Hynix PC401 M.2 SSD and a 2TB hard disk. The former drive is disappointingly inconsistent: its read speed of 2671MB/sec is great, but its write pace of 659MB/sec is barely better than SATA SSDs.

As usual, Dell produces several varieties of this machine. The entry-level model costs £2149, but we can’t recommend it – it has a Threadripper 1900X, but 8GB of memory, no SSD and a GTX 1050 Ti graphics card. It’s a baffling specification.

If you want an Alienware Area-51 Threadripper Edition, you’d be better off specifying your own machine: the Alienware website allows you to tinker with memory, storage and graphics considerations to add power or lower the price.

Well, I probably wouldn’t. The Alienware Area-51 Threadripper Edition might come from a well-known name and sport an outlandish design, but get beyond its sturdy metal exterior and there’s little to recommend.

The interior is ugly and offers poor versatility compared to conventional systems, and it’s louder in some circumstances. It’s larger and heavier than rivals – and with very little to show for it.

It’s an underwhelming when it comes to performance, too. The Threadripper processor and pair of GTX 1080 Ti cards deliver fearsome power: this machine will handle any work application and any game. Despite that, systems from smaller, specialist builders will offer superior performance thanks to clever overclocking, better motherboards and faster memory and storage.

There’s also the question of whether anyone actually needs this level of performance. For most gamers, a single GTX 1080 Ti will be sufficient – and, if you do want two GPUs, then other processors will deliver better support than the 1950X.

If you’re looking for a work machine, then you’ll probably be just as well served – or be even better off – by machines with more conventional Intel or AMD CPUs. If you go down that route, you’ll probably save money and get a machine that’s more versatile and suitable for an office environment. And, if you really do need Threadripper, then more capable and affordable systems can be found elsewhere.

The latest Alienware looks the part, but it’s disappointing in virtually every department. If you truly need a Threadripper CPU, you’d be better off shopping around.