Eagle-eyed, and slightly geeky viewers real-time drama show ‘24’of would have noticed the evil terrorists led by ‘Marwan’ all used Alienware branded notebooks to hatch their evil plans. The goodies used Dell. Hmmm. Also, in the current popular game F.E.A.R, the notebooks lying round the offices of the company whose troops are shooting at you are also Alienware branded kit. So it’s official – Alienware – the choice of baddies everywhere.


Clearly Alienware’s marketing people have been doing their homework, but what of Alienware’s notebook designers? The Area-51 m5500 is one of its new line-up of mobile products. Whereas its previous laptops were known for being seriously over specced, its current range is broader and has a more affordable look it. The m5500 in particular offers a sensible balance between size, power and cost. Highlights include its widescreen 15.4in display and echoing a trick we first saw in the Rock Pegasus 650, the m5500 has two graphics chips, which you can choose between with a flick of switch and a reboot. There’s Intel graphics for extended battery life and an nVidia GPU for gaming. Indeed, the m5500 features the same chassis so it’s size (326 x 278 x 31 (WxDxH), and weight, 3Kg, are the same. 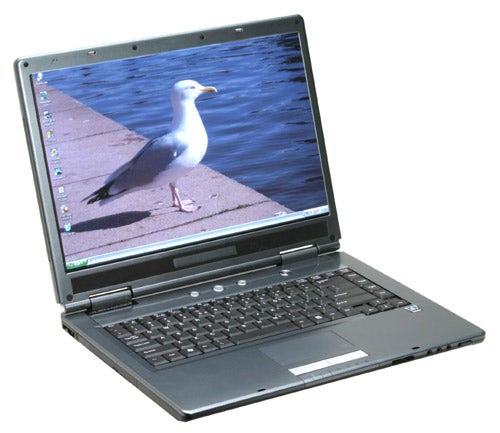 Style-wise Alienware has draped its notebook range is a rather drab battleship grey. It is fitting I suppose, as the Aliens featured on all its products are known as ‘Greys’. Looking at the notebook when it’s open, there’s little to distinguish this from the rest of the laptop crowd. The back of the lid is a different matter though. The slit-eyed Alienware head is present and correct with the logo above it and both glow blue when the notebook is powered on. There are also some rubberised grips on either side. These will help you hold onto the notebook a little more effectively but it seems to be as much for the looks as for any practical benefit. However, the lid did feel a tad too thin for my liking and it was easy to flex the screen from behind causing a ripple in the LCD panel. 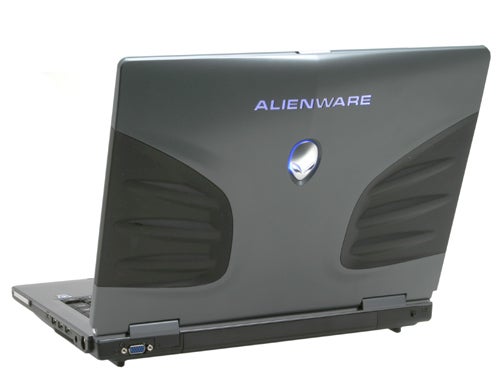 The display on our review unit had a resolution of 1,280 x 800 but fortunately shipping units will have 1,440 x 900 as standard, which is much better for a screen this size and there’s even an option for 1,920 x 1,200 though even I think that may be pushing it a bit for a 15.4in screen. Rather worrying, at the time of writing, next to each of these options on the Alienware web site it says, ‘May Delay Your Order’, which is disappointing as you’re going to have to choose one or the other. A better choice than any of these sizes however, would be 1680 x 1,050, as used by the Rock Pegasus 650.

Alienware hasn’t gone with a high-contrast coasting on this screen, which means it lacks vividness, but it benefits from being natural looking and won’t suffer from reflectivity issues. The screen could do with a bit more brightness though, and viewing angles aren’t incredible either with a definite colour shift as you move up and down and side to side, though I’ve seen far worse.


A microphone is built into the top left of the screen, while running below the screen are speakers and, according to Alienware, a built-in sub-woofer. Sound quality wise it did a good job of pumping out MP3s but it’s no replacement for a decent set of speakers or headphones. A microphone, headphone and line-out is located at the front of the unit, with one socket doubling up as an optical SP/DIF out. If you are going to connect it up to an amp, a rear connector would have been better. 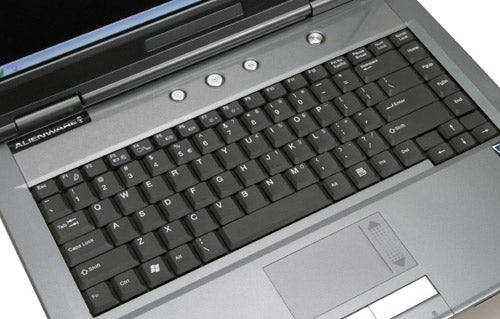 Keyboard wise, the keys are mostly full size, with the enter key the only major one shrunk down. It’s comfortable to type on but there was some sponginess under the F keys at the top left. The trackpad and buttons work well enough and on the right hand side there’s an area to move up and down in web pages easily, which is genuinely useful. There are shortcut buttons for the web browser, media player and the built-in Wi-Fi, though Bluetooth is noticeable for its absence. The power button has the de-rigueur blue lighting underneath.


Aside from this the look is fairly generic, which has to be said is a touch disappointing for an Alienware. I was also a bit put off by a quiet but distinct whining noise from the area where the power was connected – though possibly this was a pre-production glitch.

Inside the machine, there’s a Pentium M 760 processor. This runs at 2.0GHz, which is slightly less than the 2.13GHz 770, used in the Rock Pegasus 650. Oddly our review sample was fitted with only 512MB of RAM, limiting it to single channel mode. There is a second bay free for use however, so you could specify at least a second 512MB module on ordering as less than 1GB isn’t ideal these days and will provide a boost thanks to dual-channel support. It’ll cost an extra £113 though, which is steep.


There’s 60GB of hard disk storage, which isn’t humungous by today’s standards. At least it’s a decently fast Hitachi TravelStar drive with a spindle rotation speed of 7,200rpm. Removable storage isn’t so impressive. There’s no DVD Burner, only a CD-Writer/DVD-ROM combo drive – very passé. A DVD Burner is available as a cost option though.

External connectivity includes three USB 2.0 ports, a 4-pin Firewire port, a Gigabit Ethernet port and a modem socket. There’s also a PC card slot, useful for 3G data cards, and a 4-in-1 memory card reader at the front. D-Sub VGA output and an S-Video TV out is also present.


Alienware includes a set of recovery CDs called AlienRespawn, which is cutely named, though it’s not standard and you can choose to do without if you wish to save 30 quid. Kaspersky Anti-virus is another cost option included with our review sample. 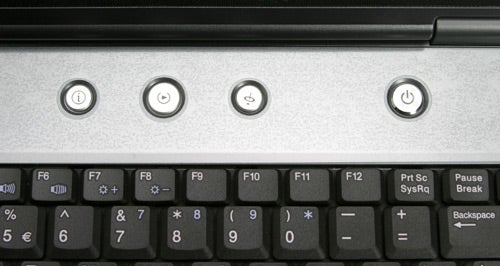 Performance wise we were keen to see how the two graphics chips compared with each other. The Intel ‘Extreme’ graphics lasted for 128 minutes is the MobileMark 2005 battery life test and only 92 minutes on nVidia, which is a fair difference. It was also longer than the Rock, though that machines faster processor would be more of a drain.


On the DVD playback test, the Intel graphics lasted an extra 52 minutes, though even so at 164 minutes in total you’ll only be getting to the end of the standard editions of the Lord of the Rings movies, not the Extended Special Editions.


In terms of SYSmark scores the Alienware keeps pace with the Rock. However it’s clear from the results that this is because we tested the Rock in SYSmark and PCMark with the slower Intel graphics enabled when we should have done so with the faster nVidia graphics enabled. Had it been apples to apples the Rock’s faster CPU and greater memory would have pulled it ahead. 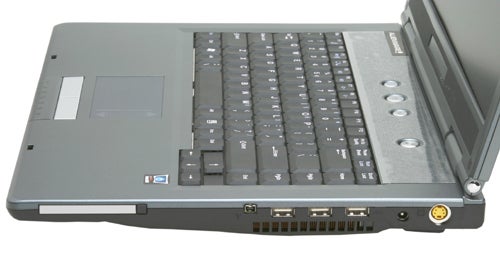 So the Alienware is a reasonable performer. However, when you compare it to the Rock, it’s clear that it’s not fantastic value for money. The Rock does cost over £100 more but you’re getting a faster CPU, double the memory, a higher resolution screen and a DVD Burner. With the Alienware you get a glowing blue alien head and rubber grips. To really throw salt into the wound, Rock also offers a free Vodafone 3G data card.


The trouble is then that the Alienware doesn’t feel special enough to justify the extra cost. Sure you get a cool designed lid, but it comes in a very generic notebook box and is attached to a generic notebook chassis. You do get some cool custom Alienware skins for Windows that are fun, but I don’t want to spend extra bucks just for that.


A decent notebook in and of itself, but for an Alienware it’s just not special enough, unfortunately making it poor value compared to other manufacturers.