A stunning 55in 4K monitor for PC gamers who fancy playing from the sofa. But a sky-high price and the lack of HDR mean you’re paying over the odds for the luxury.

The Alienware 55 OLED Gaming Monitor is exactly what it says it is, although its gargantuan 55-inch screen size will no doubt lead onlookers into mistaking it for a television.

This is very much a gaming monitor, however, boasting a monstrously high refresh rate and speedy response time for wickedly smooth visuals that are compulsory for competitive shooters. You do miss out on typical TV features, including a coax connection for aerial TV and HDR, which dramatically enhances the visual quality of supported content.

The Alienware 55 OLED Gaming Monitor’s good looks aren’t exclusive to the display; the sci-fi centric design is impressive, too.

One of the first things you’re likely to notice is how the razor-thin bezel surrounding is practically invisible – it almost looks as if the picture is suspended in the air. Apart from the Alienware logo on the chin and the U-shaped stand, there isn’t much else to comment on for the front in terms of design. 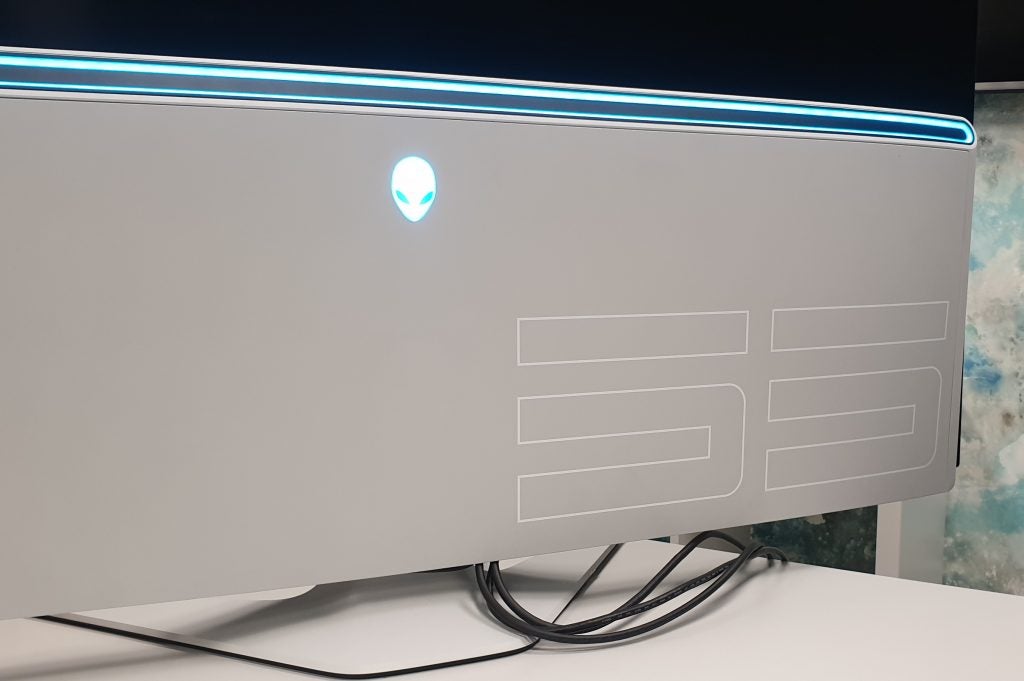 The sci-fi design philosophy is more obvious around the rear of the unit. The detachable silver plastic backplate looks as if it’s been plucked straight off a Guardians of the Galaxy spaceship, with a futuristic font and an alien head poking through the middle. LED lights give that alien a glow, as well as running horizontally across the monitor’s back. I’m a big fan of the lights; they’re subtle enough not to distract, whilst jazzing up the aesthetics to make this monitor brag-worthy to friends.

The backplate hides all the cabling, resulting in a clean and elegant look. It’s easy to take off when the need arises, requiring only a light tug. From there you can access all the ports, which include three HDMI, one DisplayPort, a couple for USB and S-PDIF Out. Cable routes lead the wires down the bottom of the stand, so you can snap the backplate back into place once everything is hooked up. 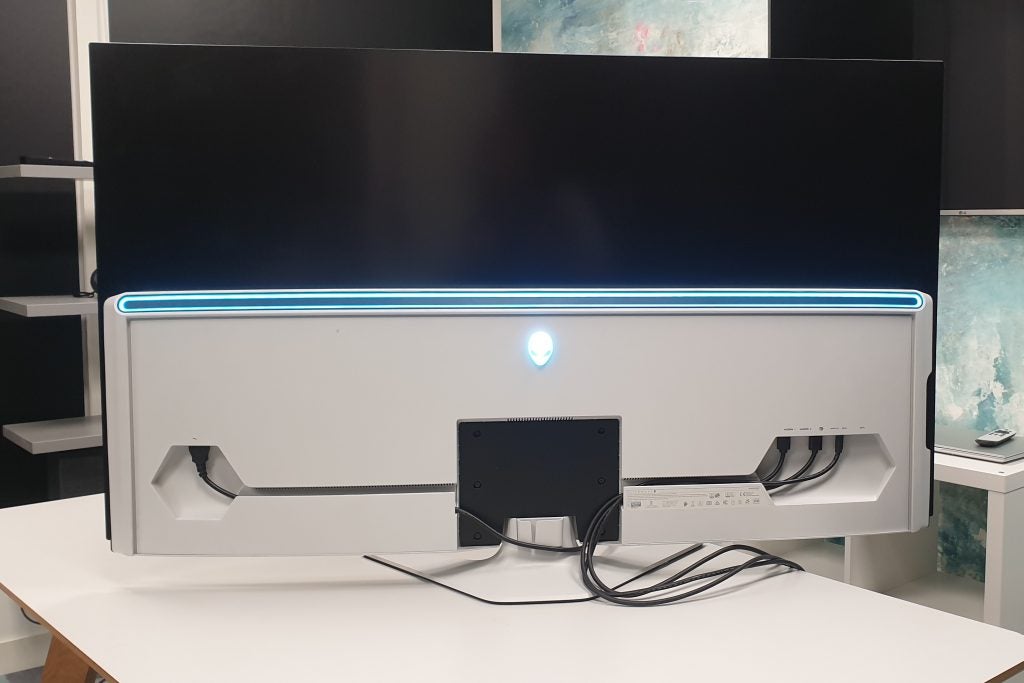 There are additional ports on the left side: a headphone jack, two USB and HDMI. The latter is in a convenient location for plugging in the likes of a Google Chromecast, for example, which wouldn’t fit underneath the backplate.

The Alienware 55 OLED Gaming Monitor is mighty heavy at 25.5kg, but that weight is in the same ballpark of a similarly sized television.

It will be the features that are the biggest reason to opt for such a sizeable monitor instead of a standard television, and in the Alienware 55 OLED a high refresh rate, low response time and AMD Radeon FreeSync all combine to deliver super-smooth gaming performance. 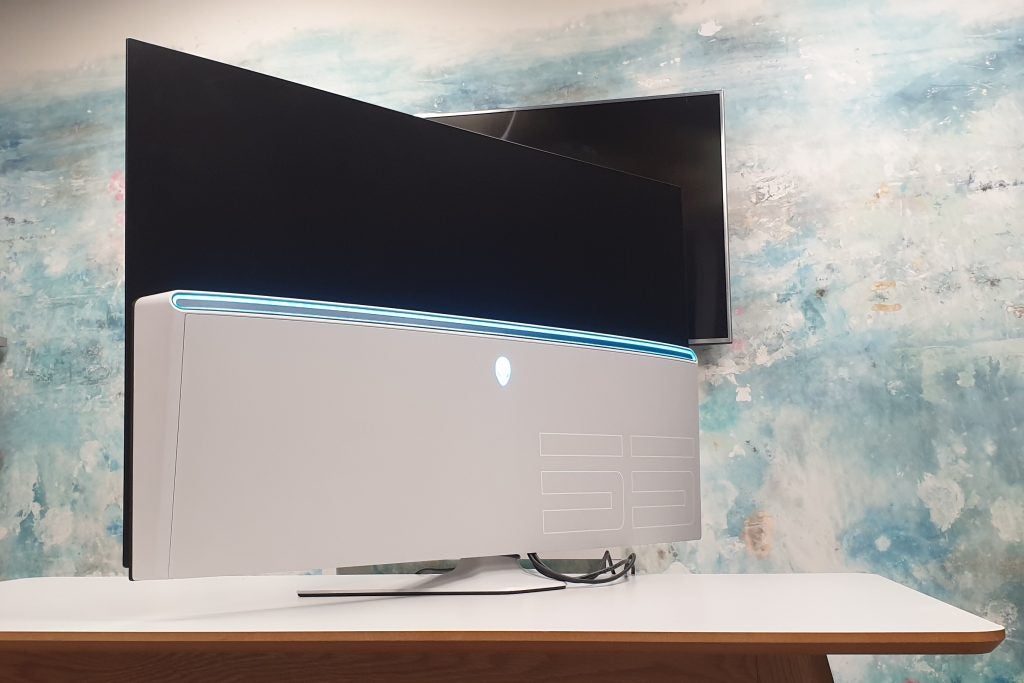 Typical televisions simply don’t offer this level of performance, so the Alienware 55 OLED Gaming Monitor is one of the first to provide competitive PC gamers with the opportunity to take gaming to the living room at this blockbuster size.

AMD FreeSync, meanwhile, locks the monitors refresh rate to the game’s frames-per-second performance, eradicating the jarring screen-tearing effect. News has recently emerged that television manufacturers – with LG to be the first – will be introducing similar technology to products in the future, though, so this feature certainly isn’t exclusive to monitors. 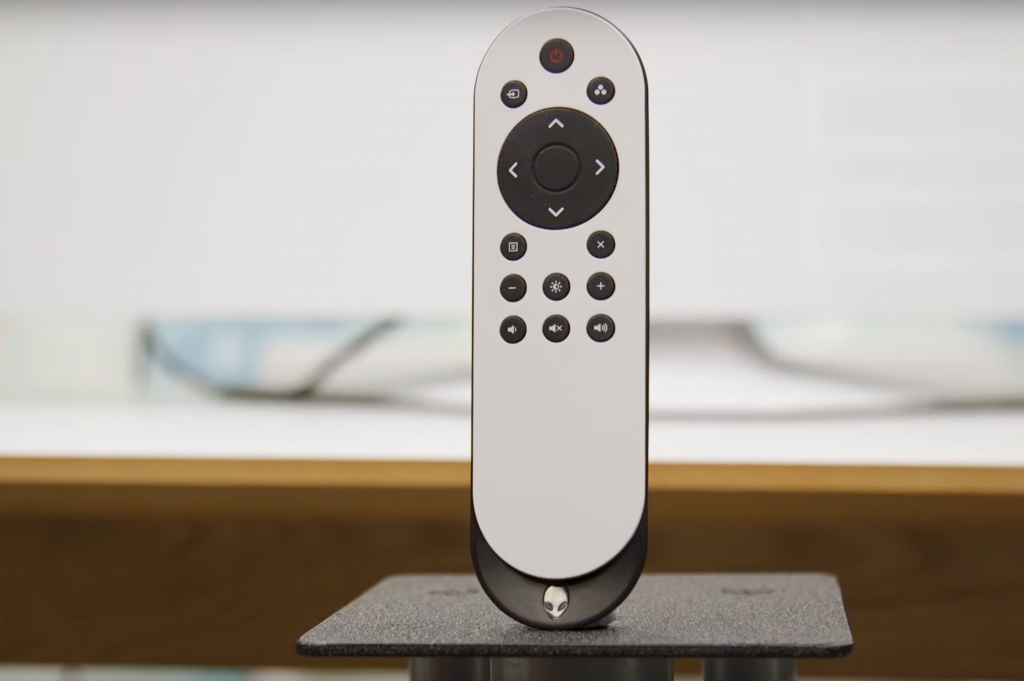 On the Alienware 55 OLED, there are multiple game-centric presets to choose from, which theoretically optimise the picture for different genres of games. Personally, I preferred sticking to the RTS preset, which seemed to have the most balanced and natural-looking picture.

The OSD can be navigated with either the physical buttons found on the underside of the monitor’s chin, or via the bundled controller – which is far more intuitive. The latter looks like a modern-day TV remote, and is flush with buttons to make volume, brightness and source inputs easy to alter.

You’ll want to accompany this monitor with hardware capable of 4K gaming (high-end gaming PC, Xbox One X or PS4 Pro), since the lack of pixel density is obvious at lower resolutions at this size, resulting in a loss of detail. If you do have the required hardware, though, the picture looks outstandingly sharp. 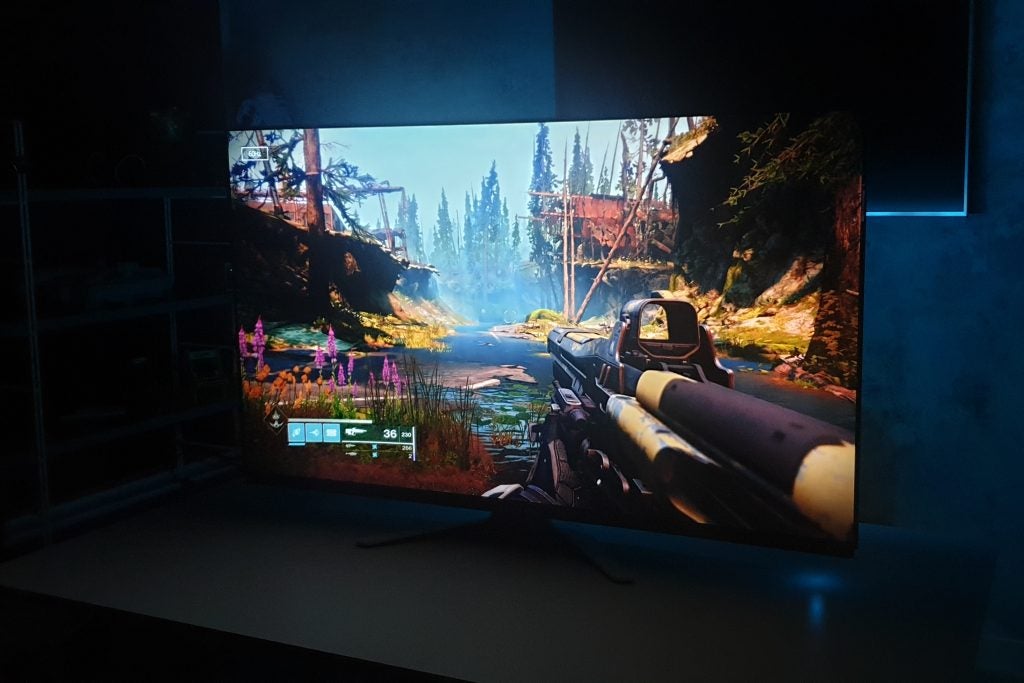 The OLED panel technology allows for deeper blacks, gifting the display a far superior contrast than what you’d find on the LCD panels usually housed in monitors.

I played Shadow of the Tomb Raider with all the graphical settings at max, and I was impressed with the colour vibrancy – this is one of the very best displays I’ve seen for gaming. With a 94.9% sRGB colour coverage, the Alienware 55 OLED Gaming Monitor is capable of producing a huge range of colours, and that’s clear in the punchiness of the picture quality.

The 76.9% Adobe RGB and 86.2% DCI-P3 colour coverage also make this monitor good enough for accurately displaying photo-realistic images – and, in theory, make it a decent option for professional photographers and videographers. That said, I really don’t see why creatives would want such a massive monitor – this is very much a gaming display for the living room. 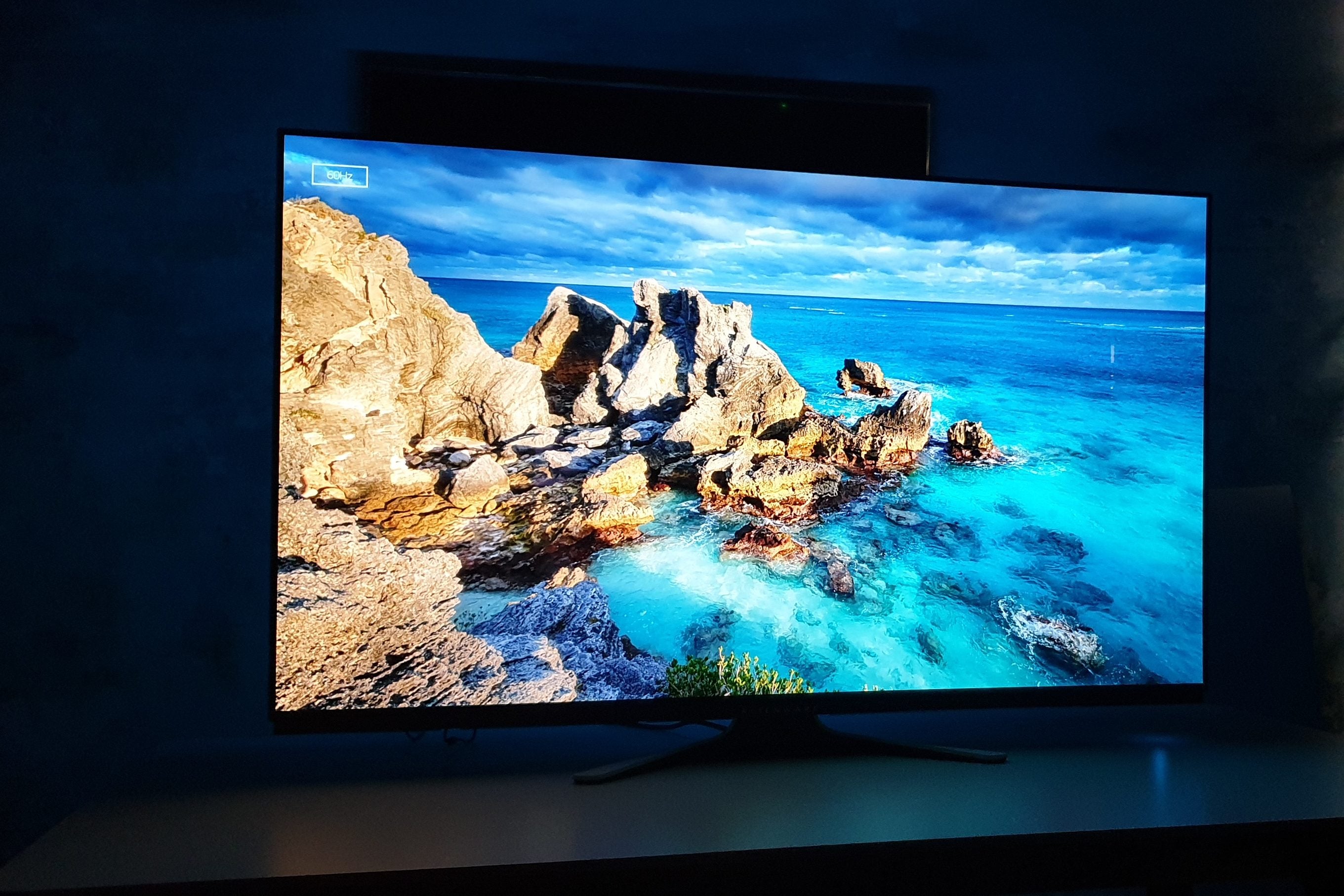 There is one huge issue with the Alienware 55 OLED Gaming Monitor, however – its lack of HDR support. Not every game supports HDR, but it becomes a significant issue when you factor in film and TV content. The lack of HDR is a shame, especially as you can buy televisions for far cheaper that do support the technology. If you’re intending to use this monitor for Netflix more than video games, then the HDR absence could well be a deal-breaker.

The Alienware 55 OLED Gaming Monitor is a dream display for PC gamers who want the wide-screen living room experience without compromising on competitive-grade refresh rates. Visuals are genuinely jaw-dropping when playing triple-A titles in 4K on this gargantuan monitor.

The biggest issue with the Alienware 55 OLED Gaming Monitor is the lack of HDR, meaning significantly cheaper televisions will offer superior picture quality when running Netflix and playing HDR-compatible games.

Alienware’s 55 OLED Gaming Monitor is certainly a luxury product then, and only really merits the lofty investment if you’re likely to take full advantage of all the game-centric features and 4K resolution.