The keyboard benefits from the Alienware’s excellent build quality, with a solid base that doesn’t budge even under the rapid-fire pressure of frantic gaming. There’s no sign of Scrabble-tile keys here, either – the Alienware’s keyboard is modelled after traditional desktop units.

The layout is fine, there’s a numberpad, and there’s reasonable travel on each key – more than most Scrabble-tile alternatives, but not as much as you’ll find on a proper desktop model. Nonetheless, it’s one of the best keyboards we’ve used on a gaming notebook, and easily matches the SteelSeries unit inside the MSI. 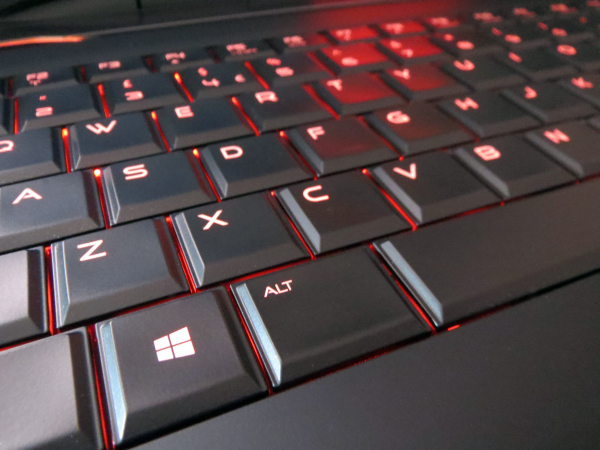 The trackpad is a disappointment. It’s too small, which meant our fingers often ran into the side of the pad during frantic moments during first-person shooter games. It’s a constant irritation, and takes away from the trackpad’s otherwise smooth and responsive surface. The two buttons are light and effective at least.

We would have preferred Dell to try to innovate with a large, wide and responsive trackpad on this machine – but instead, we’ve got a standard notebook trackpad and a huge amount of wasted wrist-rest real estate.

Our review sample has had a specification bump since it arrived, with an upgrade to a Core i7-4710MQ processor. It’s a welcome addition, but don’t expect a big speed increase – the new processor is just 100MHz (2%) faster than the chip we’ve covered here.

As usual, the specification can be changed in multiple ways, with the cheapest Alienware costing £1,299. For that money you make several compromises: a GTX 860M graphics core with just 2GB of GDDR5 memory, a DVD drive, a sole 500GB hard disk and a display reigned in to just 1,600 x 900. 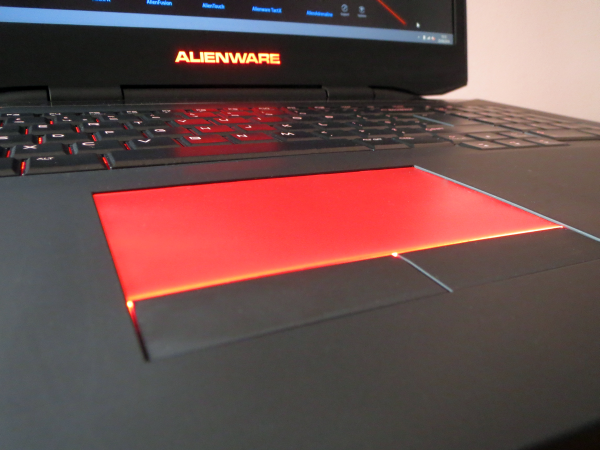 Alienware’s top specification locks and loads at a monster £2,599. That cash takes the previous model and upgrades to the GTX 880M GPU and a 256GB SSD.

Many of these components can be further customised. Options to upgrade to 32GB of RAM, different storage configurations and even 3D screens are all available.

Dell has kept this machine crapware-free, and all of the Alienware-specific settings are kept in the neat Command Centre app. Here you’ll find options to change the lights, a macro-recording module, and options for altering trackpad characteristics and detailing “game modes” that change the system environment based on what apps are running. Other options in the Command Centre are relocated Windows tools. 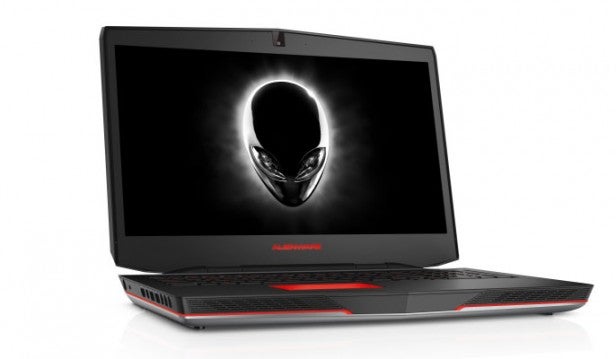 Should I Buy the Alienware 17?

The Alienware brand has long represented a no-holds-barred approach to gaming laptops, and that continues here. The high-end components deliver enough performance to make any game run smoothly, and they’re packaged inside a chassis that’s good-looking and strong.

As with other gaming laptops, the Alienware 17 is thick and heavy, and it doesn’t last long when playing games away from the mains. The speakers aren’t much cop either, despite their excellent volume, and the trackpad isn’t as good as it could have been. The screen is good, but others are better.

The Alienware is a viable option if you’ve got excess cash to spend on a system that looks good and has ample performance, but better-value options are available if you’re willing to sacrifice the slick design and you’re content with slightly fewer frames-per-second: the MSI GT70 is hundreds of pounds cheaper, and XMG’s no-frills notebooks like the Schenker XMG P304 can be even more affordable.

As usual, Alienware’s latest gaming machine looks the part, and its exciting design is backed up by benchmark-breaking speed in the latest titles. The screen is good but not great, however, and the battery life during gameplay is typically poor. As usual, though, the price is high, and portable gaming power is available elsewhere for less, albeit without the bells and whistles. Only consider this if you’ve got money to burn.

Next, try our pick of the best laptops or our recent best SSD group test