What is the Alienware 17?

Alienware laptops have been familiar on the gaming scene since they debuted in 1996, and despite being purchased by Dell it’s still a brand that delivers among the most premium gaming machines. The firm’s latest is a 17in monster that’s attempting to lord it over the competition thanks to slick design and high-end components.

The star of the show is the GeForce GTX 880M, which is Nvidia’s most potent mobile chip. As usual, the rest of the Alienware’s specification is nothing to sniff at, either – there’s a Core i7-4700MQ processor, eight gigabytes of RAM, an SSD and a Full HD screen. 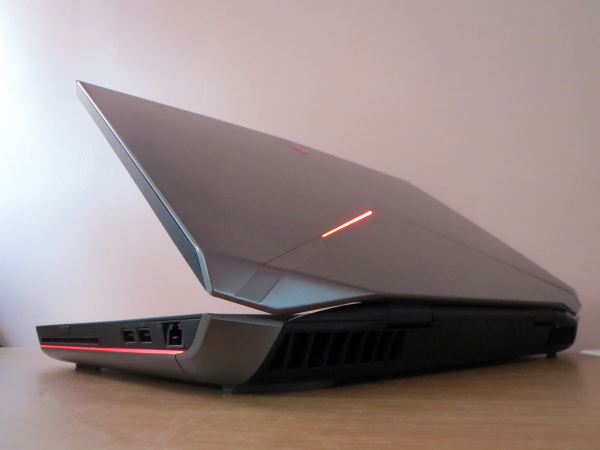 This machine follows the familiar, flashy blueprint that we expect from Dell’s gaming notebooks. The body is built from an anodised aluminium shell and coated with a matte black finish, and the machine’s edges are littered with dramatic angles and menacing-looking vents.

The black body is an attractive counterpoint to the Alienware’s extravagant lighting – an area where Dell’s gaming notebooks have always outpaced the competition. The 17 has a ring of light around the bottom, illuminated logos, keyboard backlighting and a glowing trackpad. Every one of those LEDs can be customised using the AlienFX app, which allows for different colours, patterns and transitions, and even different displays depending on how you’re using the laptop. 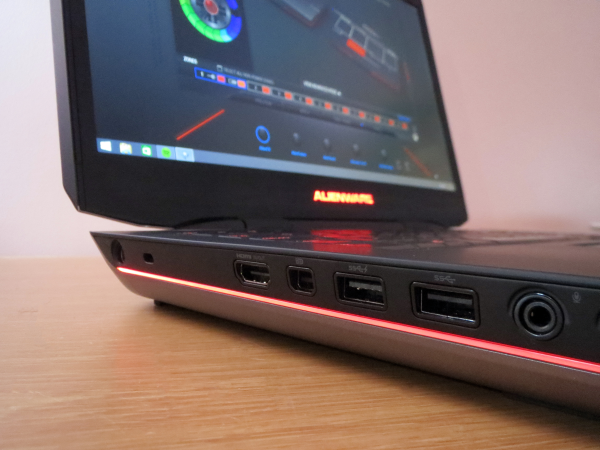 The Alienware’s gargantuan chassis has plenty of room for ports. The edges house a total of four USB 3.0 connectors,  both HDMI and mini-DisplayPort outputs, three audio jacks for surround sound, a slim-line DVD drive, and Gigabit Ethernet (powered by a Killer Ethernet chip). On the inside, there’s also dual-band 802.11ac Wi-Fi and Bluetooth 4.0.

A machine of this size is not going to be slung in a backpack all that often but will likely be carted between houses and LAN parties, so we’re pleased that build quality is good. The Alienware’s body is as strong as it looks, and the 9mm-thick lid barely budges when pressed, which should help protect the screen – this is  big improvement on the flexible panels we find on most other systems. 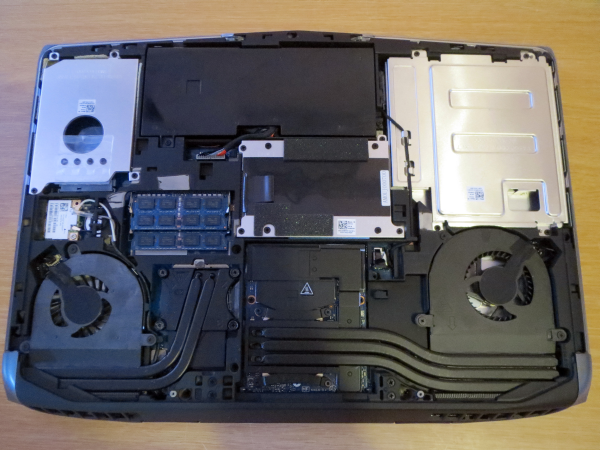 The problem with all of this is size and weight. The 17 tips the scales at 4.1kg and it’s 48mm thick when its rubber feet are included. You’ll want a well-built backpack to lug the Alienware around, and it’s comfortably one of the biggest gaming notebooks we’ve seen: slightly slimmer but a tad heavier than the MSI GT70, and only a little smaller than the Asus G750JX. It’s also a world away from the likes of the still very powerful Alienware 14 and Schenker XMG P304.

The base can be easily removed, providing access to the memory slots and hard drive bays. Both the memory sockets were full on our configuration but you could certainly swap them out for even higher capacity units. Meanwhile one of the hard disk bays is empty. Elsewhere, every component and heatsink is accessible, including the Wi-Fi card, battery and the core chips, and many screws are numbered in the correct order to ease dismantling.

The 17’s screen has many of the attributes we like to see on a gaming system. It’s got a matte finish, a Full HD resolution and there’s no sign of touch compatibility.

Quality is decent, but the Alienware’s benchmark scores don’t quite match rivals. The 326 nit brightness is a little lower than the 343 nit result of the MSI GT70, and the Alienware’s 0.41 nit black level couldn’t match the GT70, either. The contrast ratio of 795:1 is enough to give games reasonable black levels and good punch at the high end, but the MSI, Schenker and the smaller Alienware all offer better contrast. 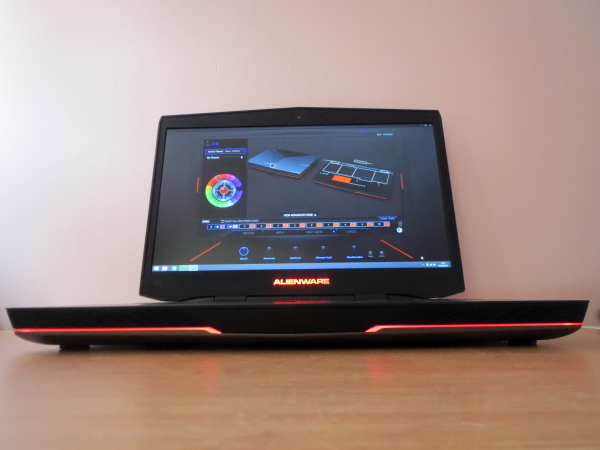 The Alienware 17’s colour temperature is too warm, but it’s not far enough from 6,500K to cause problems, and the sRGB coverage of 89.7% is good – a high figure that didn’t fall down in any one area. The average Delta E of 7.03 is bad, and the maximum Delta E of 12.94 is even worse. Both of those results are a long way behind rivals, and both mean that colours won’t look as lifelike as possible.

The 17’s panel has its good points – the matte finish, resolution, brightness and contrast are all decent – but it’s hampered by poor results elsewhere and the strength of the competition. 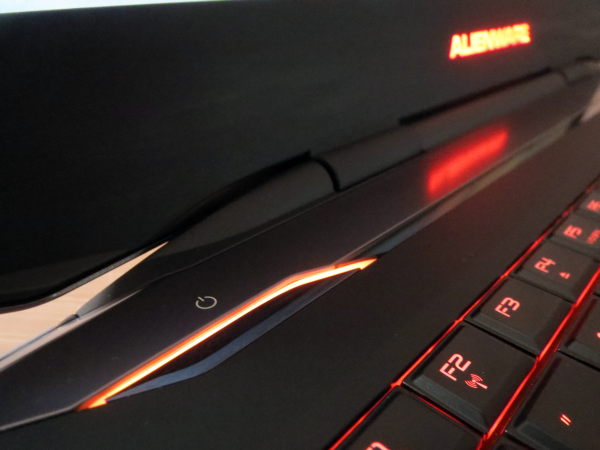 Speakers aren’t as big a deal as they used to be thanks to the popularity of headsets, but that’s not stopped Dell including the loudest speakers we’ve ever heard on a gaming laptop.

The ear-destroying volume isn’t matched by great quality, though. The mid-range is the loudest thing here, but it’s too flat and lifeless, with tinny high-end noises mercifully pushed into the background. Bass, too, is underwhelming. The Alienware has huge volume, but that’s not enough to make games sound their best – we’d still prefer a headset.