As ever, performance will vary depending on the specification you decide to plump for. We’re using the middle spec machine which consists of an Intel Core i7-4710HQ and Nvidia GeForce GTX 970M. That’s a pretty formidable combo and its power was evident in our tests.

Starting off with overall system performance, PCMark 7 returned a score of 4456. This does trail the 6000+ scores of the fasting gaming machines out there but is comfortably ahead of the majority. Meanwhile in Geekbench its score of 12747 came even closer to the fastest machines we’ve tested, with the best only reaching around 13000.

The storage setup is a well balanced one, providing a speedy boot drive and ample bulk storage. A larger SSD would be nice, but it’s an easy upgrade that can be applied later. The only slight fly in the ointment is that the installed SSD isn’t the fastest we’ve ever encountered. Its read speed of 486.40MB/s is fine but a write speed of 126.55MB/s is about half what we’d expect in this day and age. It’s still faster than a hard drive, but other SSDs can perform better. 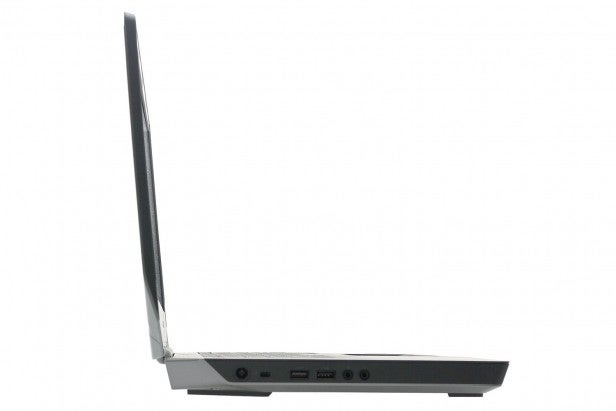 The HDD was more in line with expectations, returning read and write speeds of 106.32MB/s and 95.18MB/s.

When it comes to gaming, the GTX 970M made mincemeat of most of our benchmarks, delivering 71fps in Bioshock Infinite at 1080p and at its highest quality setting. In Unigine Heaven it also delivered 70fps at 1080p in basic mode. It did drop to 34fps in extreme mode, but that’s still mighty fast.

The overall story is clear, which is that gaming at 1080p at generally high detail settings is easily achievable on this machine.

Gaming laptops inevitably get a little loud and toasty but the Alienware 15 largely coped pretty well. During general desktop tasks it remains near silent, though it does have the slightly annoying tendency to every now and then ramp up even under modest load, such as a flash advert running on a website.

This can be held in check by tweaking the Windows power options to use the fans less, though this may cause more throttling of the CPU – it really depends whether you prioritise absolute speed or quiet operation. 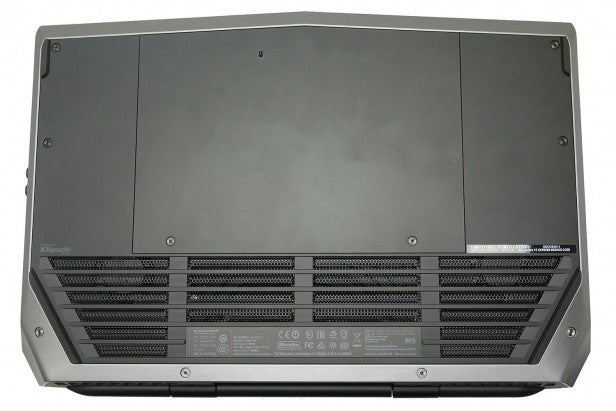 Under load, and particularly while gaming it’s a noisy machine, there’s no two ways about it, but it’s no worse than any other – gaming laptops are noisy.

Heat is exhausted out the right rear edge and it’s below this area that gets the warmest. It doesn’t get so hot that you’ll need to worry desperately but you may want to avoid gaming on the finest French-polished table tops.

The CPU and GPU under extreme load rose to peaks of 92 and 90, which is a little high but certainly not a concern, and most of the time they were closer to 80-85, only occasionally jumping to the peak temperatures. Crucially, the cooling system does a good job of keeping them cool enough to not make either have to drop in speed. 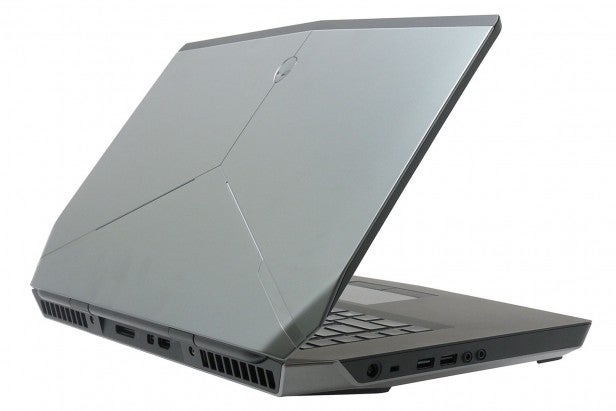 Battery life is always of debatable concern for larger gaming laptops, but it’s always good to know you can survive for a few hours away from a socket when the need arises.

Thankfully, then, the Alienware 15 will last 5 hours and 37 minutes, according to our PowerMark test, which simulates watching video and browsing the web with the screen at 40% brightness. This isn’t entirely class leading, but comfortably outpaces the majority which tend to struggle to get past four hours.

Used as our main laptop for the review period
Tested for at least a week
Used consistent benchmarks for fair comparisons with other laptops
Reviewed using respected industry benchmarks and real world use
Previous
Alienware 15 Review Next
Keyboard, Trackpad and Verdict Review