Dell offers the Alienware 13 in a variety of different options which are split into four tiers. The top-end OLED model comes with a quad-core 3.8GHz Intel Core i7-7700HQ CPU, Nvidia GeForce GTX 1060 GPU with 6GB DDR5 VRAM, 16GB of DDR4 RAM clocked at 2400MHz and a 256GB speedy PCIe SSD as standard.

Adding a further layer of complexity, each tier has a variety of different upgrade options that let you increase the size of the SSD and RAM.

The baseline OLED model I reviewed performed pretty much as expected, and matched similarly specced versions of the Razer Blade and Gigabyte Aero 14. The Alienware ran in with 4195 single-core and 14,062 multi-core scores on the CPU-focused Geekbench 4 benchmark. The Blade and Aero 14 scored 4094/12,442 and 4229/12,903 respectively when running the same test. 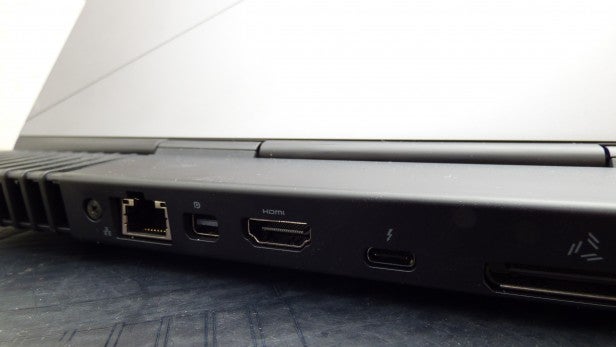 On the GPU-focused Firestrike Ultra synthetic test the Alienware 13 scored 2658. The score again puts the Alienware on a par with the Razer Blade and Aero 14, which scored 2585 and 2647 respectively on the same test.

This means for 1080p gaming the Alienware is more than up to the task for most titles. Rise of the Tomb Raider’s benchmark ran at a silky smooth 51.37fps at 1080p with the graphics maxed out, as did Drive, which benchmarked at 73.5fps. The newer Ghost Recon Wildlands benchmark also ran at a playable 35.6fps in1080p maxed out, so it’s worth sticking to Nvidia’s recommended settings to get the best out of newer games.

Don’t expect to max out the latest games at 1440p, though. Older titles, like Tomb Raider and Drive, remained playable, running at 39.05fps and 62.2fps respectively in 1440p, but new ones fell below the 30fps mark. Ghost Recon benchmarked a juddery 26.3fps and I never managed to get Resident Evil 7 beyond 28fps with its graphics maxed out. Still, these games look great at a notch below maximum settings, so it’s worth playing around with them to see where the sweet spot is at 1440p.

On the topic of speakers, they won’t replace a dedicated sound system or an expensive headset, but they are pretty good by laptop standards. They have enough volume to drown out background noise and bass levels are low enough to ensure explosions and in game effects sound powerful. The high end is also reasonably good, though distortion can occur when you turn the laptop’s volume to max.

Back to performance, the Alienware 13 also worked fine when I connected it to the Oculus Rift and played VR games, such as Robo Recall, stutter-free.

The SSD isn’t the fastest around, however. During my benchmarks I detected 1618MB/s read and 335MB/s write speeds. This puts it behind the Razer Blade which ran in with 2541/356MBps speeds in the same test. 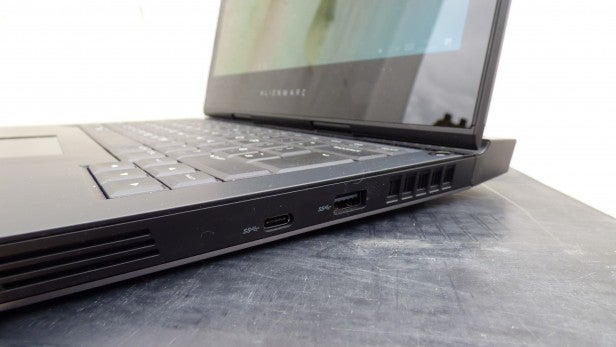 Gaming laptops never have decent battery lives, as they put performance over efficiency, but the Alienware 13’s 76Wh battery is far from the worst I’ve tested. Running TrustedReviews’ synthetic battery test, which loops 10 minutes of web browsing and five minutes of video playback using Powermark with the screen brightness at 150 nits, the Alienware managed to last 5hrs, 9mins. The Blade by comparison struggled to make it past four hours running the same test. The Gigabyte Aero 14 conquered this test, though, with a score of over seven hours.

Gaming put a larger drain on the battery. Playing games off the mains the Alienware never lasted more than a few hours. It also won’t get you through a full working day without needing a charge, but that’s pretty standard for a gaming laptop. Using the 13 as my work laptop starting at 9.30am the laptop tapped out at around 3.00pm. 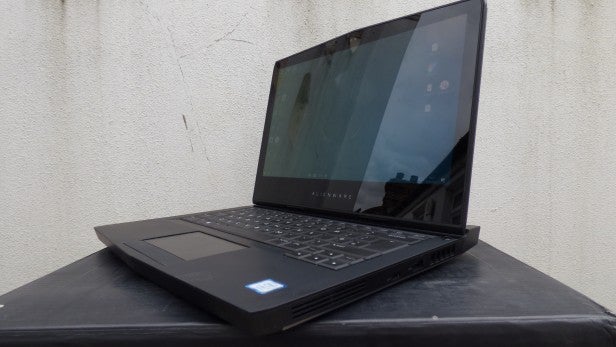 Should I buy the Alienware 13?

The Alienware 13 isn’t the prettiest gaming laptop around, but it is one of the most flexible and ticks all the right boxes when it comes to functionality. The wealth of customisation options means gamers can tweak it to meet their specific needs and desired price point. Its excellent keyboard and robust metal chassis certainly add appeal over rivals, such as the Razer Blade and Gigabyte Aero 14, for buyers where mobility doesn’t matter so much.

I do wish there were a GTX 1070 model available, which makes taking advantage of the top-specced OLED version’s 1440p screen resolution challenging. I can see the cheaper GTX 1050 Ti version, which comes with a 1080p IPS screen, offering better value for money for most buyers as a result.

An excellent gaming laptop with a wealth of customisation options.