What is the Alienware 13?

The Alienware 13 is the latest portable laptop from Dell’s premium gaming brand. Like the Razer Blade and Gigabyte Aero 14, it aims to offer buyers a compact gaming system that’s powerful enough to play AAA games at 1080p, but small and light enough to be carried around without becoming a burden.

Featuring a wealth of customisation choices, an optional OLED screen and one of the best keyboards I’ve seen on a laptop, the Alienware delivers on performance, but its chunky chassis means it’s a little too heavy and thick to comfortably carry around in a regular satchel or backpack.

Dell sells the 2017 Alienware 13 in a wealth of different configurations that range in price from £1249 to £1849. All versions feature the same chassis, ports, keyboard and trackpad as last year’s model, which is both a blessing and a curse.

From a connectivity and usability point of view the design is excellent. Dell has loaded the Alienware with all the connectivity options any modern gamer will ever need. There are two USB 3.0 ports, a single USB-C and Thunderbolt Gen 3 for high-end peripherals, plus an HDMI 2.0, DisplayPort 1.2, Alienware Graphics Amp proprietary connector, Ethernet, headphone socket and microphone jack.

I’m not a fan of the majority of the connections being sat on the back of the laptop. Though some members of the team prefered this setup, for me it reinforces the feeling that Alienware 13 is a desktop replacement that’s designed to spend the majority of its time on a desk, not carried around like a regular laptop. 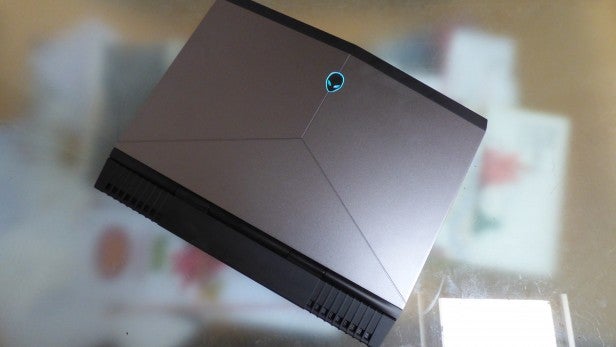 This feeling is reinforced by the laptop’s chunky dimensions. Compared to the recent batch of thin-and-light clamshell gaming laptops, the Alienware 13 looks a little old-school, and not in a good way.

The new 13 is thinner and lighter than older Alienwares, measuring in at 22mm thick, it feels to large for a regular laptop bag. This is also due to its giant screen bezel, but it’s mainly because the laptop’s cooling and rear ports stick over an inch out of the laptop’s back.

The bump dramatically increases the laptop’s footprint and meant it didn’t comfortably fit in any of the regular 13-inch laptop bags I tried and was an outright bust in my satchel, which has managed to house 15-inch laptops in the past.

The Alienware’s 2.6kg weight is also fairly excessive for a 13-incher. Both the Razer Blade and Aero 14, which have similar specifications to the Alienware, weigh less than 2kg and are much thinner.

The Alienware does feel well made, which is helped by a feeling of density. There’s a lot of stuff inside this 13-inch machine. The magnesium alloy chassis is one of the most robust-feeling I’ve seen, and I’ve no doubt it’ll survive a few knocks while being carried in a bag. It’s also pleasingly resistant to smudges, which is more than can be said for the Razer Blade. 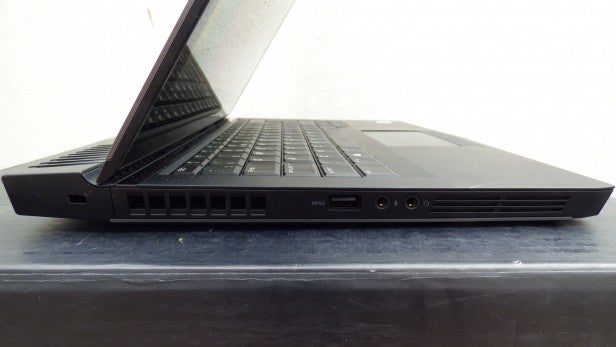 The keyboard and trackpad remain key selling points for the Alienware 13. Like the 2016 Skylake version, the 2017 models features an Alienware ‘TactX’ keyboard. The keys aren’t as responsive as a dedicated mechanical gaming keyboard, but they’re a noticeable step up from the chiclet keys on rivals such as the Razer Blade. The keys feel more responsive and have a pleasing 2.2mm of travel and solid click action that makes the Razer’s board feel spongy by comparison.

A steel plate underneath the TactX keyboard also eliminates any flex. Even during heated gaming sessions the laptop chassis didn’t bow at all, no matter how hard I mashed the keys. This made it much better to play intense eSports and shooters on than competing gaming laptops, like the Aero 14, which feature fairly malleable plastic cases. 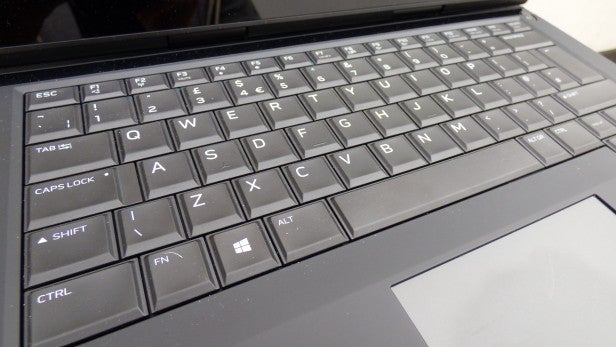 A touchpad is never a valid replacement for a mouse during gaming, but for general browsing and everyday use the Alienware 13’s is more than good enough. The trackpad is suitably large and reliably reactive, and I never had any issues with multi-touch actions during my two weeks with the device. The physical left and right click buttons are also a welcome addition that makes the trackpad more comfortable to use than older Alienwares.

RGB lighting fans will also be pleased to hear that the trackpad and keyboard have AlienFX lighting controls. The pad is limited to single colour configurations, but the keyboard is split into four customisable multi-colour RGB zones. I’m personally not a fan of making my laptop look like a carnival, but it’s nice to have the choice.

The version I tested also came with a Tobii Eye Tracker. The tracker is sat next to the front-facing web camera and, in theory, can be used to control some games and create heat maps of where you were looking when recording gameplay. It should also help save battery power by intelligently dimming the screen when you look away for prolonged periods. This all sounds great, but in practice I found it slightly annoying and turned the tracker off after the first few days, as it was a little too reactive and had a tendency to dim the screen whenever I so much as glanced away from it.

OLED tech is still a rarity in the laptop market, although it’s becoming more common on smartphones and TVs. This tech, on paper, should let the top-spec Alienware offer significantly better black levels and more vibrant colours. 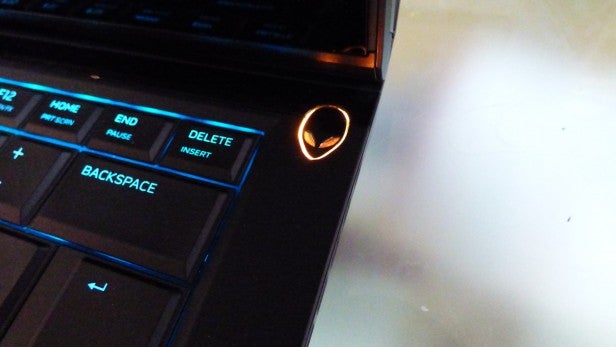 With real-world use the OLED panel doesn’t disappoint. Blacks on the Alienware are among the deepest I’ve seen on a laptop and make for a significantly more immersive gaming experience, especially when playing atmospheric titles like Resident Evil 7. The inkier blacks also make colours look more vibrant, which works great with comic-like games such as Overwatch. I also didn’t notice any input lag, thanks to the screen’s 120Hz refresh rate.

My naked-eye impressions of the OLED screen rang true when I cracked out TrustedReviews’ trusty colorimeter. The screen tests detected a 6331K temperature that’s only a smidgen warmer than the 6500K ideal. The 100% sRGB and DCI P3 colour gamut coverage also makes the Alienware 13 great for artists and video editors, as well as general gamers.

Next
Performance, Battery and Verdict Review