Exclusive to PS4
At times, Alienation feels like a game designed to combine just about everything currently floating in the gaming zeitgeist. There aren’t many twin-stick shooters/action RPGs, and even fewer that blend elements of Destiny, Diablo, Smash TV, Gauntlet and Dark Souls, but Housemarque’s latest somehow manages to make the whole thing come together. Like any good arcade shooter it’s addictive in the short term but – man, has this thing got legs. The stuff that gets you hooked in the first few hours might just keep you hooked weeks later, especially if you have some mates to play with.

The scenario is classic alien invasion sci-fi, and not something that Housemarque puts huge emphasis on. Aliens are doing their best to take over the planet, while an International fighting force, UNX, is doing its best to stop them. You pick one of three classes – the Tank, Bio-Specialist or Saboteur – and go out, alone or with up to three comrades, on a series of campaign missions against the extra-terrestrial foe. 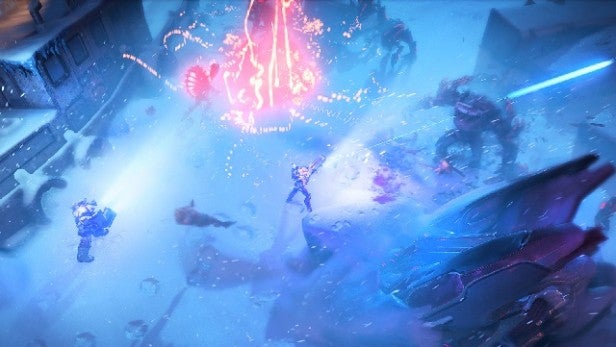 The action takes place from a Diablo-style third-person perspective, where you move with one stick, aim with the other and blast away with the R2 button. L2 handles a selection of explosive weaponry, R1 covers melee attacks, while the D-pad and face buttons give you access to class-specific capabilities, ranging from camouflage to artillery strikes to healing skills and energy and shockwave attacks. You go out on the battlefield and try to make your way to the marked objectives, while those troublesome xenos speed towards you in their dozens. You blast them before they kill you. It’s as simple as that.

This is a twitch shooter, yet it also has a layer of tactics. Your current explosive and your abilities all work on cooldown cycles, making it important to use them only when you need them most. After the first level you’ll also gain access to secondary and then heavy weapons, giving you shotguns, magnums, rocket-launchers, miniguns, energy weapons and flamethrowers, but with limited ammo that needs to be used wisely. 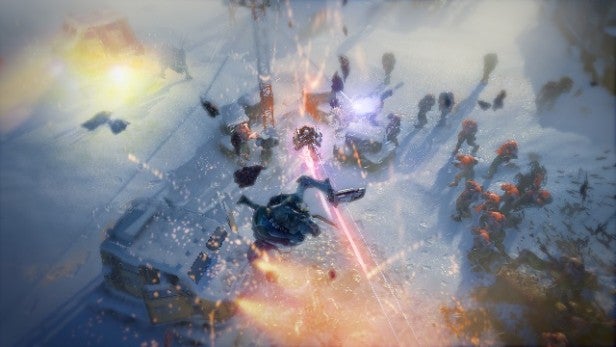 The Destiny/Diablo comparisons crop up because this is also a loot and upgrade-heavy blaster. Kills mean experience leading to beefed-up health and capabilities, while you’ll find crates and high-powered aliens hold weaponry, graded by level and by rarity.

There’s always a bigger, badder gun around the corner, not to mention a bigger, badder creature to shoot with it. You can also upgrade your weapons manually, either by collecting power cores and spending them on upgrades, or by finding and salvaging guns for parts then using those to re-roll a weapon’s stats. The latter approach is a risky endeavour, as the stat you re-roll may improve substantially or degrade slightly, but if you’re finding the alien slaughter hard going it’s sometimes worth taking the risk. 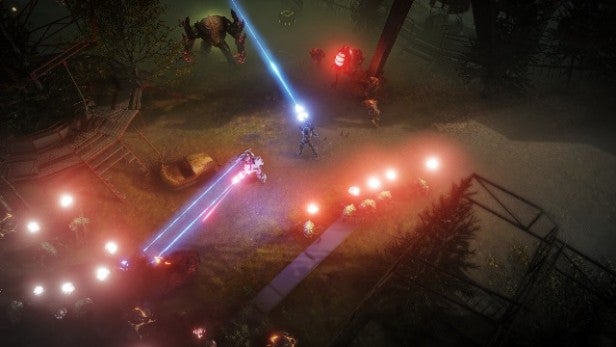 As a solo game, Alienation is tight, enjoyable and fiendishly more-ish, the repetitive nature of the action balanced by the range of enemies, a variety of locations and the drip-feed of new weaponry. On the downside, it’s also sitting right on the line between challenging and frustration, due to the way the whole game operates.

Missions and waves are procedurally generated, and while there are rather sporadic checkpoints you can activate, death sends you back to the last one with new enemies respawned, as in a Souls game. As a result, you’ll have to fight through new hordes of enemies just to get back to the point where you were slain.

What’s more, Alienation throws in one-off events, like a mini-boss battle or a sudden horde of enemies, that can be very tricky to get through – though you’re not asked to repeat these if you fail them once. Alienation is compulsive enough that you’ll want to keep trying, over and over, but at times you’ll ask yourself: does fun really have to be this hard? 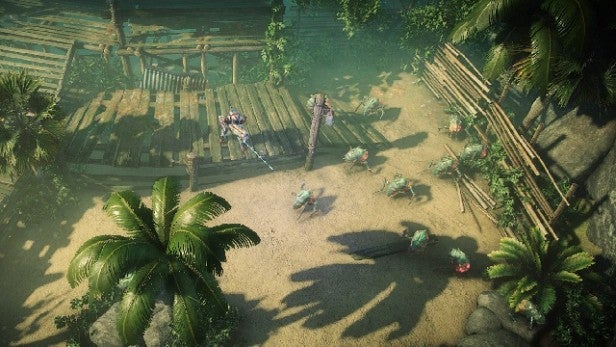 The way around this, as in Destiny, is to play in co-op mode. Not only will you have more firepower (though more enemies) but you’ll also have other players to heal or revive you. In fact, having a balance of classes will make it easier to get through each mission, full stop. And it’s worth playing co-op, because the multiplayer experience elevates Alienation from a good game into a great one.

Before release the lack of players on the server has made forming a four-player party pretty tricky, but even playing with one or two random players the action picks up, as you work together to smash through the xenos, defend each other from the hordes and rush in for a last-minute revive on the edge of death.

In this respect and many others, Alienation is a lot like Helldivers – Arrowhead’s similar top-down shooter of last year. Helldivers is a funnier game, with its Starship Troopers satire and its rich opportunities for accidental slaughter, but Alienation has more varied aliens and scenery, better weapons and more interesting capabilities. It also has more striking visuals, using its snow, industrial and jungle landscapes as a canvas for a cacophony of plasma blasts, explosions, flying corpses and environmental damage, all driven by a physics engine that’s perfectly over the top. 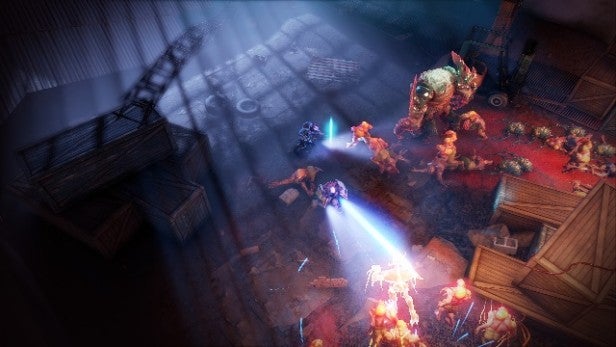 What’s more, Alienation has been designed to last. You can keep levelling up beyond what would normally be the end of the campaign, acquiring new weapons and replaying procedurally-generated scenarios to try them out. There are even mechanics to invade, Dark Souls-style, another player’s game, throwing elements of PvP into the mix (faint hearts will be glad to know that the invasion option can be turned off). Find a group of like-minded PSN friends and it’s the kind of game you’ll keep coming back to, just like Destiny or Diablo III.

Verdict
It might not have the arcade purity of Resogun, but Housemarque has crafted a genre mash-up smash. This is a smart, addictive twin-stick shooter with no shortage of adrenaline, yet it also works as a compelling action RPG with potential for a lot of co-op mileage. Alienation has short-term appeal and eye-candy spectacle, but also replay value and long-term depth. It’s furiously entertaining AND has the legs to keep you coming back.