The Lifetab S10346 is a 10-inch tablet built by Medion in partnership with German supermarket chain Aldi. Priced at £149.99 and packing basic specs, it’s aimed firmly at the low end of the tablet market. In this way it’s much like the critically acclaimed Tesco hudl 2, winner of Best Value Tablet in the TrustedReviews Awards 2014.

However, it provides nowhere near as positive an experience as its supermarket rival’s offering. Performance is sluggish, the camera app is faulty and there are also serious issues with the screen. We recommend forking out a little extra for the same-sized Lenovo Yoga Tablet 10 HD+ or saving a few pennies with Tesco’s 8.3-inch superstar. Dead set on it? Read on to find out why you really shouldn’t buy this tablet. 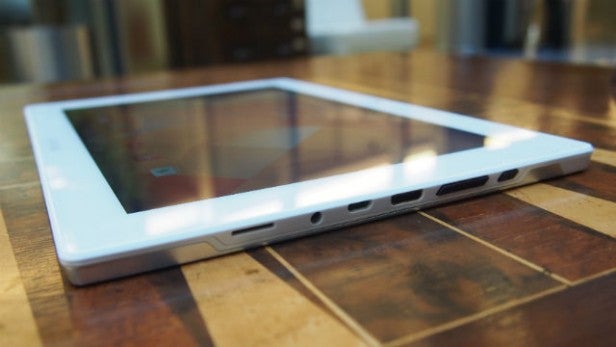 The Aldi Medion Lifetab isn’t going to stop you dead in your tracks. If you were to browse the web for a stock photo of a generic-looking tablet, you’d probably settle for something that looks a lot like this. And we’re not just saying this to hurt Aldi’s feelings.

It’s very angular, partnering straight lines with sharp corners and edges. The glossy plastic front/grey metal rear combination is ugly and we feel that, with a little effort, Aldi and Medion could have made this look significantly better. Leaving out the metal entirely might have improved its overall look because in its current state it just looks messy. We got to play with the white model, but a slightly better-looking black version is also available.

The oversized bezels are good for resting your thumbs on and succeed in making the tablet easy to grip, but for aesthetic reasons we wish they were a bit smaller. 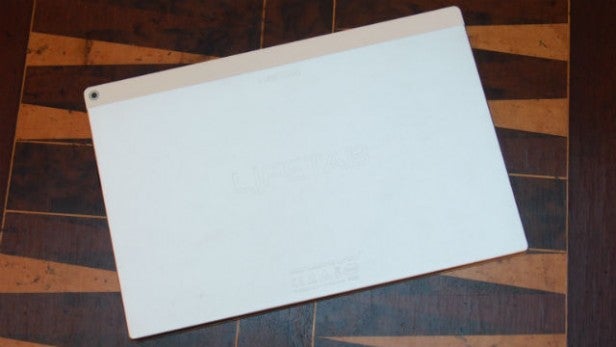 It’s heavy at 580g, but not unbearably so. To compare, the 9.7-inch iPad Air 2 weighs 437g and the 10.5-inch Samsung Galaxy Tab S 10.5 is 465g, but they’re right at the top of the market and cost a lot more money. The Lifetab’s weight is manageable in one hand for short periods of time, but this is where the design lets it down.

The metal rear isn’t that easy to hold when your palms are sweaty, and makes the Lifetab appear to weigh a lot more than it actually does. Make sure you don’t lose the stand included in the box, you’ll need it if you want to watch a full-length movie. There are a few build quality issues too. The unit’s right speaker doesn’t fit into its recess as well as it should, with part of it jutting out slightly. The joins between plastic and metal on the sides and back are also visibly uneven, which isn’t nice for the fingertips or eyes.

In landscape mode, you’ll find a solid selection of ports and physical buttons on the right-hand edge. From top to bottom, these are: power, volume, Mini HDMI out, Micro USB 2.0, the headphone jack and microSD card slot. The power and volume buttons don’t feel entirely stable, and it’s easy to wiggle them around with your fingernail. They offer a little resistance yet remain easy to push, making a nice little clicking sound when you press down on them.

It’s fiddly to hold the tablet in this position when the charging cable or headphones are plugged in, since they stick out exactly where you’d normally keep your right hand. You’ll either have to flip it into portrait mode or slot it into the tablet stand to counteract this. 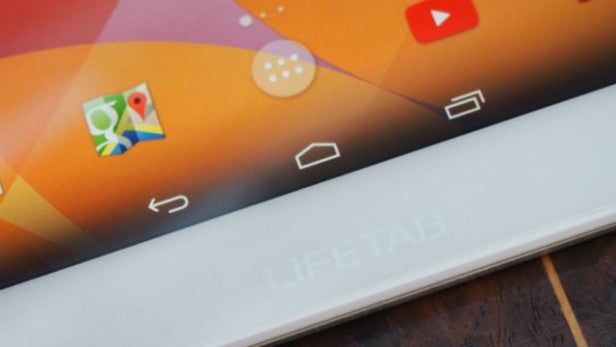 The Lifetab’s 10.1-inch screen is a 1,920 x 1,200 IPS display, which is impressive for a tablet this cheap. It’s the same resolution you’ll find on the Lenovo Yoga Tablet 10 HD+, which costs £100 pounds more. However, it suffers from one massive problem.

The biggest issue with the display is its responsiveness. All too often we found ourselves having to tap the screen two or three times for anything to register, and swipes were sometimes identified as taps. We even temporarily convinced ourselves that the display had a thick sheet of protective perspex slapped across it. After a few minutes of scratching and fumbling at the corners, we realised that the screen itself was at fault.

This makes typing a real nightmare. We found it difficult to enter search terms in Google without losing one or more characters. Writing emails took us at least twice as long as it should have.

Rather than feeling like a capacitive touchscreen, which is the slick newer touch technology most tablets feature, the Lifetab almost feels like it uses the horrible old resistive type. We resorted to prodding it slowly and forcefully, as you’d do with the screens on the back of plane seats (at the risk of riling the person sat in front of you). It’s a serious issue.

In practise, the display is pleasant to watch, with Full HD videos looking good. Viewing angles are decent too, but colours look a little washed out. It struggles with black levels, with the screen failing to differentiate between dark colours and plain black, making shadowy movie scenes tough to watch. 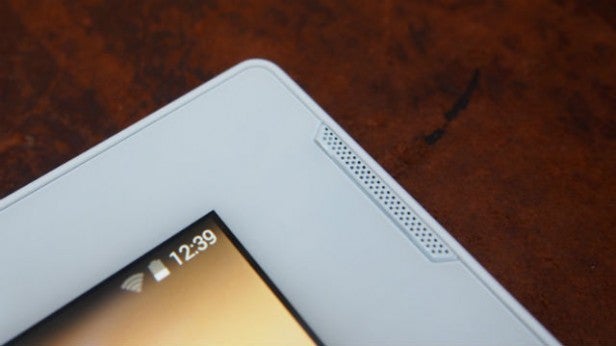 The brightest screen setting won’t make you screw up your eyes, but it’s quite good. Using it outdoors was fine for us, but we must confess that the London weather has been dull of late. We have no doubt that using the tablet in the height of summer sunshine will be a more challenging. And while Aldi claims that the screen features an anti-fingerprint coating, but our greasy digits had no trouble breaking through it.

The Lifetab is also plagued by audio problems, and one of them is truly headache-inducing. Every time we plugged in a pair of headphones and touched the screen, a horrible buzzing noise erupted and filled our ears, and it was genuinely awful. While it’s not a dominant sound, it’s still noticeable when you’re playing music or watching videos, taunting your eardrums from behind every guitar riff and on-screen conversation.

Thankfully, unplugging the headphones seems to take away the buzz, resulting in a much more pleasant aural experience. The front-facing speakers are positioned on either side of the screen, but are easy to muffle with your thumbs when you’re holding the tablet in the landscape position.

They’re fairly loud but lack bass, so if you’re after something with real oomph, we recommend either looking elsewhere or investing in some decent speakers. At full blast, our unit comfortably overpowered the sound of the shower in the next room, though. Not bad for a tablet.