What is the Aldi Ambiano Premium Stand Mixer?

Unless your head has been stuck in a fruit cake for the past four weeks, you’ll have spotted that The Great British Bake Off has returned to our screens. Cue much cooing over Paul Hollywood’s twinkly blue eyes, Mary’s natty bomber jackets and those fancy stand mixers on the bakers’ workbenches.

But said stand mixers are pricey, so this year, low-cost supermarket Aldi is hoping to win over inspired viewers with a cut-price model.

The Aldi Ambiano Premium Stand Mixer is designed take on all the heavy-duty baking tasks you’d expect of it, including whipping, whisking, kneading and mixing, but it also comes with a versatile mincer attachment.

As a keen baker who relies heavily on my KitchenAid, I couldn’t wait to see how the Aldi machine compared. 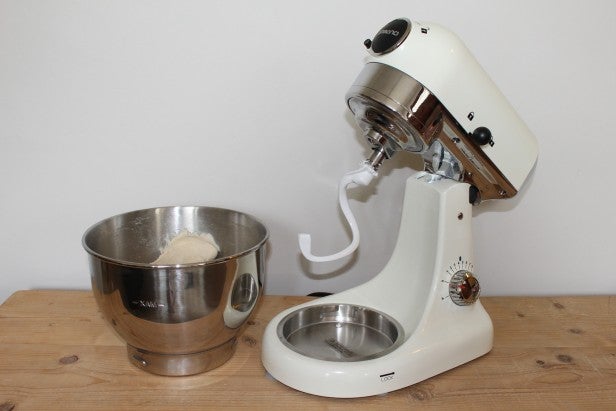 The Aldi stand mixer certainly looks familiar, featuring many design flourishes from KitchenAid’s Artisan. These include its overall shape to the lever at the top of the unit that releases the mixer head so it can be tilted back.

It’s solidly built, too, with a die-cast aluminium body, a powerful 1,000W motor and a large 4.6-litre stainless steel bowl. This twists and locks into position, and stays put even through tougher jobs such as combining and kneading dough.

However, it’s lighter than its counterparts. This makes it a little easier to lift out of a cupboard if you don’t have space to keep it out on a worktop, but also makes it less stable.

Rubberised feet at the base do help the mixer grip to surfaces, but it isn’t an entirely effective solution, as I’ll explain later. 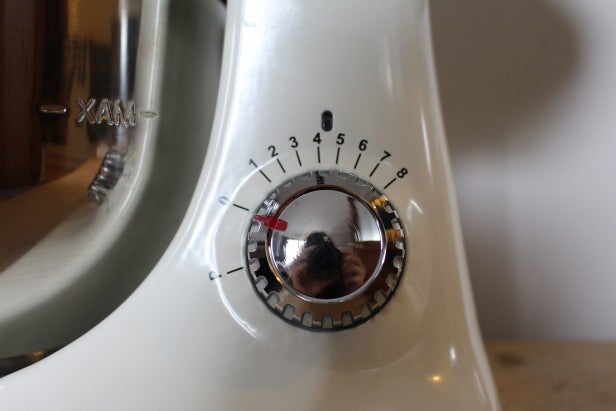 Like most stand mixers, Aldi’s comes with a stainless steel balloon whisk for whipping cream and meringue, a ceramic dough hook for kneading dough, and a ceramic paddle beater that’s used for combining cake batters.

However, in a bit of a coup, the Aldi mixer has an extra mincer attachment, made up of 14 – yes, 14 – components. These can be combined in different ways to create a meat mincer, a kebab mincer, a sausage maker, a pasta maker and a cookie presser.

Also included in the box is a protective splash guard that sits on top of the bowl. This has a chute for feeding in ingredients, and lets you bake away without getting a face full of flour. 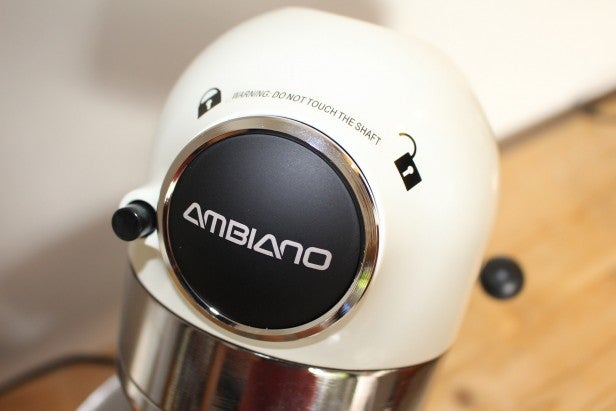 Aldi Ambiano Premium Stand Mixer – What’s it like to use?

Before I could start using the Aldi premium stand mixer, I had to choose the right attachment, push it up into the drive shaft and twist and lock it into place.

My KitchenAid requires me to perform much the same action, so I didn’t find it too fiddly – if anything, it was actually easier to do on the Aldi mixer.

As I was mixing up a bread dough and then kneading it, I started with the beater, which I’d later swap for the dough hook.

A dial is used to adjust the speed of the mixer. There are eight settings, plus a pulse that provides a quick blast of power. It’s best to combine ingredients at a lower speed, so I turned the dial to “2” and started adding my flour, yeast, salt and water. 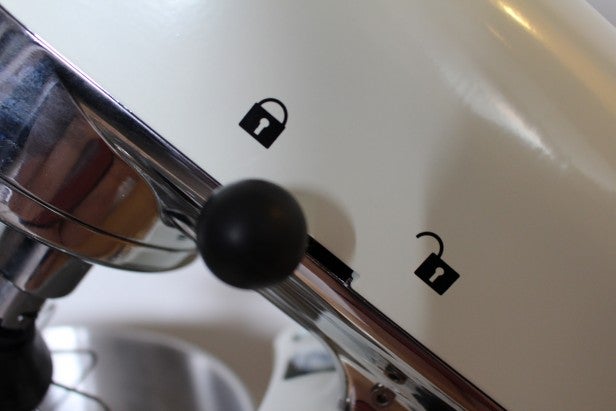 It took less than a minute for the ingredients to be combined, the beater’s “planetary motion” – a sort of wonky figure-of-eight movement – and rubber “wings” doing a fabulous job of collecting rogue ingredients from the sides of the bowl. Unfortunately, the mixer made such a racket, even at this low level, that my husband rushed in to see if the kitchen was still in one piece.

Worse was to come; I added the whisk attachment and attempted to whip cream at high speed. Sure, I had a fluffy mixture in a handful of seconds, but during this time the mixer was vibrating so much that it shuffled a few inches along the worktop.

Noise aside, you can’t fault the Aldi mixer’s performance. It happily whisked up sugar and egg whites into a voluminous meringue, dealt admirably with my favourite Victoria sponge recipe – Nigella’s, in case you were wondering – and turned out a lovely white loaf with a crusty outside and fluffy middle. 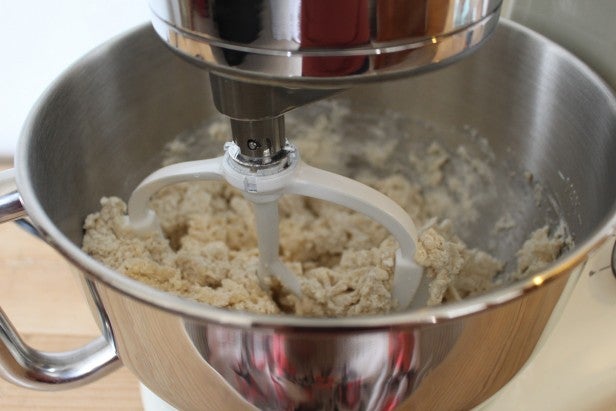 Next, I decided to try out the extra attachments. Baffled by the array of parts, I fished out the instruction manual, which features exploded views showing how to put them together to do various jobs.

The pasta maker proved the simplest to construct since it consisted of just four pieces – a fixing ring, a pasta attachment (there are four different shapes, depending on the type of pasta you want to make), a feed screw and a feed tube.

Once it was assembled, I needed to press a knob to remove the front cover at the top of the mixer, then push the pasta maker into the mincer drive. It was all very fiddly, and I can’t help thinking all those little parts would soon get lost at the back of a drawer. Not all of them can be cleaned in the dishwasher, either. After making a few measly tubes of pasta, I gave up. 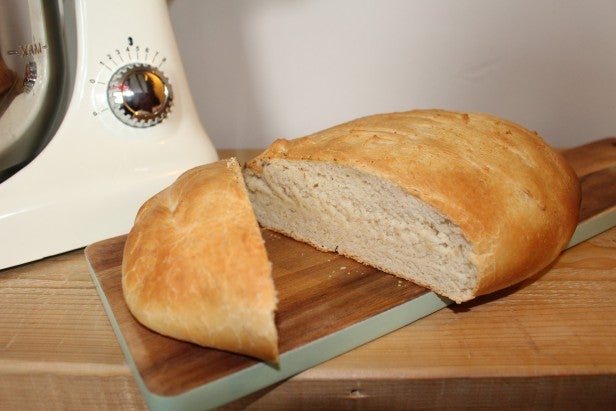 Should I buy the Aldi Ambiano Premium Stand Mixer?

If you’re looking to upgrade from a wooden spoon or even a hand mixer, the Aldi model is a reasonable place to start. It performed every task we threw at it to a high standard, from kneading dough to whisking meringue.

It’s just a shame that it makes such a din. Also, those bonus attachments are such a faff to put together, let alone use, it’s unlikely you’ll ever bother to get them out of the box.

The Aldi mixer is more than £200 cheaper than its main rivals, yet mixes just as well. However, it loses out on the Star Baker title due to the racket it makes and those fiddly attachments that can’t be cleaned in a dishwasher.