I know people in this group and they ask me whether such a phone exists. They grumble that when they go into high street phone stores the staff want to sell them music phones, thin phones, internet phones, phones with high resolution cameras, and phones that make tea.


There are, in fact, a number of low cost, low feature phones around to satisfy this need. The last one I looked at in this bracket was Sagem’s £20 My215x.

The Alcatel OT-E201 is an even lower cost option. You can get it with an Orange SIM, and you can get it from Woolworth with no SIM at all. I slapped a T-Mobile SIM in my review sample and it worked fine. For £15 it sounds like a bargain for those who ‘just want to make the odd call’.


As you’d expect from a handset in this price bracket the materials it is made from are low cost. The casing is black plastic, with a sort of leather look banding round the edges. There is a silver frame to the screen, and the buttons are also silver with black marking for their numbers, letters and icons.


The number backlight is a rather startling red – Alcatel might have been better off taking the option of a more subtle white, but there’s no doubt the backlight means keys do stand out well in the dark.


The phone weighs in at just 69g, which I think makes it the lightest mobile I have ever reviewed. It measures 98mm tall, 42.5mm wide and 18.5mm thick – it’ll fit in a pocket easily enough.


A rubbery material has been used for the keys. It feels a little strange under the fingertip, but works well enough and key presses deliver a reassuring tone when pressed. The number keys are well spaced, which means hitting them is easy as pie.

Above the numbers sit two rows of three buttons. There is a pair of softmenu keys and Call and End keys, the latter doubling as the phone’s on/off button. The middle two buttons have several functions. They are shortcuts to Messages and Contacts, but also act as scroll keys and can be used to alter the volume during calls. This all works well enough.


The screen is tiny. Measured at a mere 1.3 inches corner to corner. It delivers just 96 x 76 pixels and is a CSTN type that manages 65,000 colours. Obviously these specifications have kept production costs down, but if you’ve seen almost any other mobile phone screen lately you are going to feel a bit let down by this one. At least you can personalise the display with built-in wallpapers and a choice of colour schemes.


Alcatel has used a huge font for the display, so that there is only room for four lines of text. Often you only get two lines of text that represent information you are entering, as the bottom line is reserved for softkey options, the top line for telling you the area of the phone you are in at the current time. 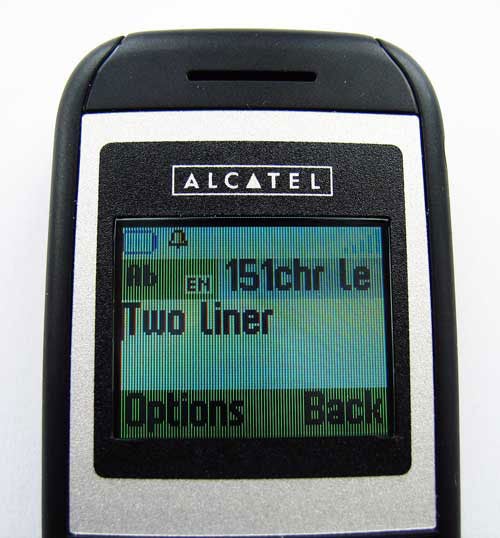 This means those who often have difficulty reading text on a mobile stand more chance of making sense of what the OT-E201 is trying to show them, but they won’t get to see a lot of information at once. Probably a good thing.


However, it means that composing an SMS when you can only see a couple of words at a time, for example, can be pesky. I do like the rolling display along the top line that tells you how many characters you have left for a text, though.


There is a long list of what isn’t in this phone. There is no email support, no web or WAP browser, no music payback, no document reader. You’ll probably be able to guess from that absences list that there is no camera either. And there is no support for memory expansion beyond what’s built in. There is a calculator though, four separately functioning alarms and a vibrating alert.

You probably aren’t expecting PC connectivity given the feature set, and so you won’t be disappointed to hear there isn’t any. The only connectors on the handset are for the mains power adaptor and a mono earbud. In this case the fact that the latter is a 2.5mm connector is probably not going to be any issue of any kind.


The range of ringtones is decidedly plinky in quality, but there are some rather fun tones among the set.


Although this is a very basic phone Alcatel has managed to provide two games, a Tetris clone and a Breakout clone. The bad news is that neither is satisfying to play. The small screen just can’t show enough information at a workable size, and the phone is slow to respond to key presses. Both games are best avoided. 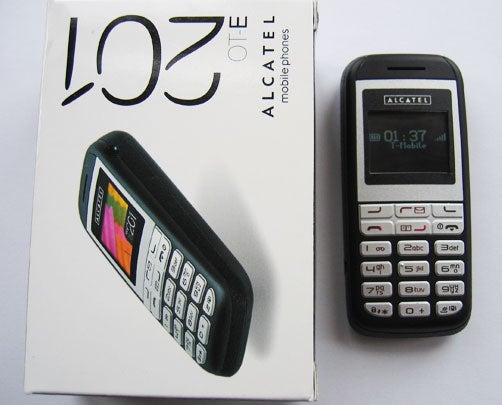 The OT-E201 comes in what must be the smallest mobile phone box in the world. It just about has room for the mains power adaptor, the mono earbud and a tiny folded manual as well as the phone itself.


With no music playing ability I tested the battery life by seeing how long this phone lasted on a full charge. It stayed alive for just a bit more than six days during which period I used it for some calls and texting.


Obviously, with such a truncated feature set, the OT-E201 isn’t going to get very high scores in some respects. But I think it represents superb value for money for anyone who just wants a simple mobile for making calls. And no doubt it could double as a second phone for anyone worried about taking their fancy schmancy handset to the less salubrious places they frequent.


While obviously not a handset for the feature-hungry anyone looking for a very simple phone to use on a pay-as-you-go basis will find the OT-E201 suitable.