What is the Alcatel One Touch Idol?

You may not be aware of it but Alcatel is one of the biggest phone manufacturers in the world, the 6th biggest in fact. Low-cost feature phones made primarily for the Asian and African market are its bread and butter, but the One Touch range is Alcatel’s attempt to crack the smartphone market. At £200 the Idol is Alcatel’s mid-range offering in the One Touch line-up.

Focusing on design, user experience and value, the One Touch Idol combines an impressive 4.7 inch screen with a dual-core processor and 1GB of RAM in a smart, unibody design. The question is can it really compare to phones in that price bracket made by Samsung, Sony, Nokia, ZTE or HTC? 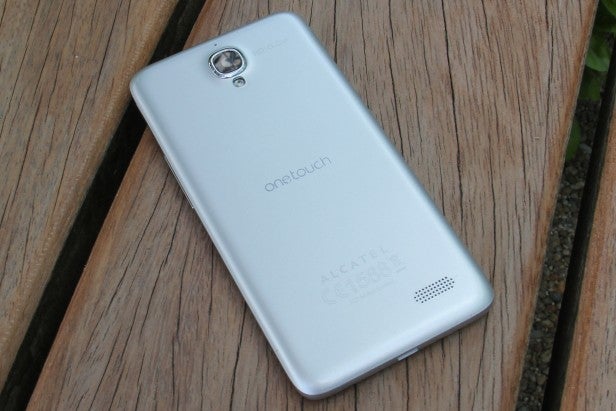 From a short distance the One Touch belies its £200 price tag. Covered in what looks like brushed metal you’d be forgiven for mistaking it for a much more expensive phone.

In hand you quickly realise and the back is made of hard plastic, but it is decent quality stuff. A ridge that runs around the entire edge of the phone ruins the Idol’s good looks a little and makes it look more plasticky than it needs to. On the other hand, it does help make a grippy surface and the Idol remains a handsome phone regardless. The lack of hard edges makes holding it for long periods of time comfortable, despite its size.

The metal power button is located at the top of the phone and is firm and springy. Unless your hands are on the small side you shouldn’t have a problem reaching it to turn the screen on or off. The volume rocker is on the right hand side, providing easy access for adjustment and the obligatory three Android touch buttons are at the bottom of the screen.

Turn the phone over and you find the One Touch logo emblazoned on the back. The camera protrudes slightly above it, although not too much to ruin the aesthetics or snag on pockets.

Where the One touch Idol is a little let down is by its SIM and microSD card slots. These are covered by some flimsy plastic flaps. We’d have liked these to be a more robust, but on the plus side you shouldn’t notice too much unless you regularly swap SIM or microSD cards. 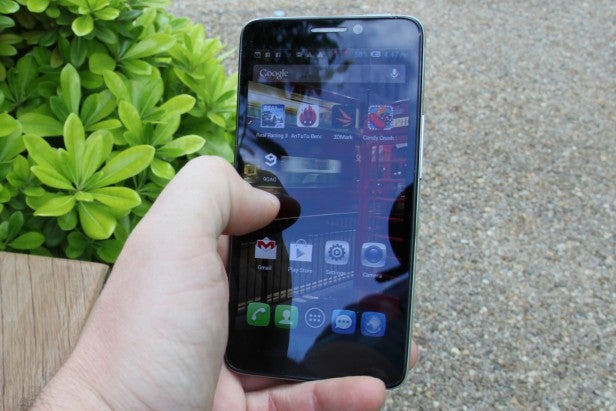 One of our favourite aspects of the One Touch Idol is its screen. The 4.7-inch toughened glass display (Dragon Trail rather than Gorilla Glass in this instance) is streets ahead of most other phones in its price range.

Colours are bright and vivid, if a little oversaturated. It’s bright too, perfectly visible in a sunlit day, not that you’ll be noticing much with the British summer. Video is clear and detailed while text is sharp and crisp, making reading websites or eBooks a pleasure.

The mono speaker is loud enough to watch a movie or listen to music with company; if that’s something you intend to do.

With a dual-core 1GHz CPU, PowerVR SGX 531 GPU and 1GB of RAM the One Touch Idol is zippy rather than super-fast. There was no lag when scrolling through menus or opening apps, which was helped by the fact that Alcatel doesn’t bloat Android 4.1 Jelly Bean with lots of additional software and processes.

In our AnTuTu 3.3 benchmarks it scored a respectable 6,527. What does this mean in real terms? Well performance is generally solid throughout use. Simple games like Candy Crush Saga or basic 3D games like Temple Run 2 run without a hitch. Play more graphically intensive games, however, and you’ll find some lag issues. Real Racing 3, for instance, is playable but stutters when cornering.

The One Touch Idol comes with 4GB of internal storage, enough to keep your most important apps on. This can be expanded to a much healthier 36GB with a 32GB microSD card, enough for most people to store all the music, apps and even video they want to have on the go.