Blackberry may have lost a good deal of its luster in the mid and high-end part of the smartphone market — something that’s been helped by the long delayed Blackberry 10 OS — but the company’s budget phones are still pretty popular, partly due to their Qwerty keyboards, but also because of the Blackberry Messaging Service (BBM). Alcatel’s One Touch 916 doesn’t support BBM of course, but it does have a Blackberry style Qwerty keyboard and because it runs on the Android OS there’s a much larger library of apps available for it. The phone is cheap too, as you can buy it on pay as you go for around £59.99. 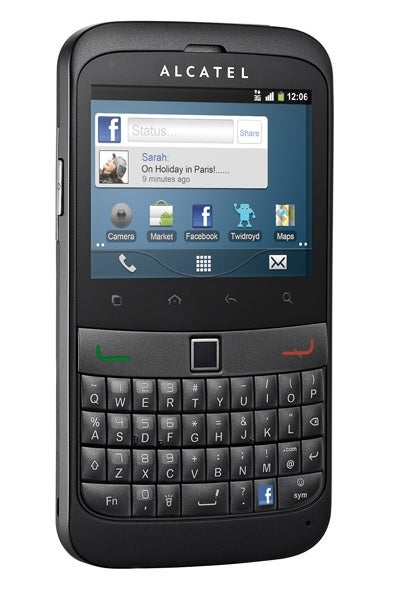 Alcatel’s phones tend to be a bit of a mixed bag when it comes to design and build quality. However, the 916 is definitely one of the company’s better looking and better built offerings. When you pick it up it feels very solid in the hand and if you apply pressure or twisting force to the chassis it doesn’t flex or creek like a lot of budget phones. It feels comfortable to hold too, thanks in no small part to the curved battery cover that’s finished with a slightly rubberised coating. There’s some nice detailing too, such as the metallic band on the back that frames the camera lens and rear mounted speaker grill.

From the front the 916 looks very much like a traditional Blackberry handset with a landscape screen at the top, an optical joystick in the middle and a full Qwerty keyboard beneath. Naturally, as this is an Android phone there’s also a line of four touch buttons directly beneath the screen for the usual menu, home, search and back functions. The front styling is rather attractive too, thanks to its glossy black and gun metal grey colour scheme.

Alcatel has sensibly placed both the power/lock switch and standard 3.5mm headphone jack at the top and you’ll find the volume rocker switch on the right hand edge. Flip the phone over to the other edge and you’ll find a dedicated camera button — something that’s pretty rare on Android handsets, so it’s a welcome addition here.

Of course, the quality of the keyboard is hugely important on these types of messaging phones, but thankfully Alcatel has actually done a good job here. The keyboard is very similar to those on recent Nokia messaging phones such as the Asha 302 and E5. The keys are square, but they bubble out at the centre and as a result feel quite comfortable under your fingers and thumbs. They give a distinct click when pressed and have a surprising amount of travel, so they’re actually very comfortable to type on and after a bit of practice you can get up a decent typing speed when tapping out emails or text messages. 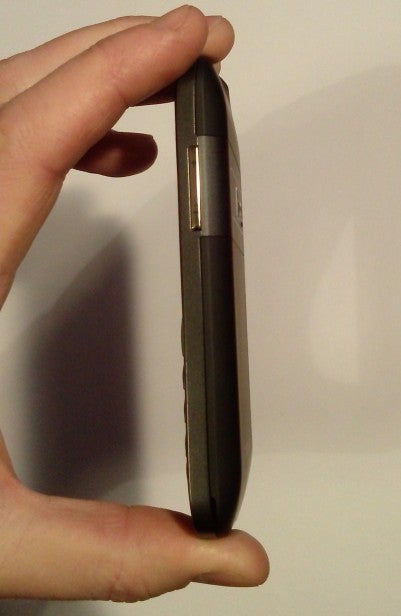 The layout is good too and there are a couple of additional keys. One of these turns the LED flash on and off so you can use it as a torch when you’re trying to get your keys in the lock at night. The other one is a dedicated Social Media button that’s set up by default to launch the What’s App messaging service, but can be changed from within the settings menu to launch any app you want.

Less successful is the optical joystick that sits above the keyboard. It isn’t really of much benefit on this this phone, as it’s just far easier to reach out and touch the screen than trying to scroll around menus or webpages via the joystick.