The Idol 4S isn’t the most powerful smartphone around. The octa-core Qualcomm Snapdragon 652 CPU and 3GB of RAM don’t come anywhere close to matching top-end Android phones like the Snapdragon 820-powered HTC 10 or OnePlus 3. In day-to-day use the components are generally fine, though.

Apps open in milliseconds and video generally streams smoothly on decent Wi-Fi and 4G networks. Navigating menus is quick, while 3D games such as Riptide GP2 and Banner Saga play chug-free, albeit with slightly longer loading times than expected.

Occasionally the phone would unexpectedly chug, or slow down, however. I never managed to pin down an exact reason why, as the issues cropped up at random. The first time the phone chugged was when I was switching between menu screens. A week later it unexpectedly slowed down when I was watching Netflix, with no other apps open. I’m guessing the issue is software, not hardware, related and due to Alcatel’s skinned version of the Android OS. 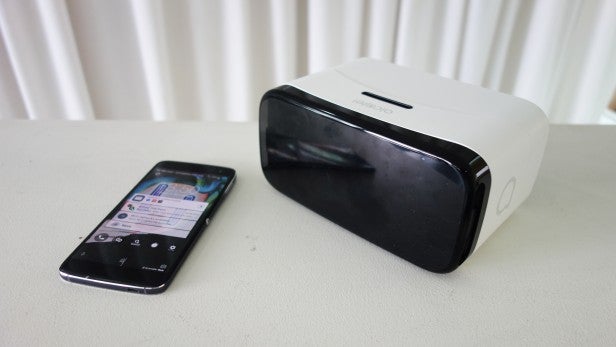 The Alcatel Idol 4S’s benchmark scores mirrored my real-world impressions. On the generalist AnTuTu benchmark the Idol 4S scored 76,756. That figure places it below the Vodafone Smart Platinum 7, which has identical parts and scored 82,660. I’m guessing this is due to the heavy Android skin, which increases the number of background processes running.

On Geekbench the Idol 4S ran in with 1,533 single-core and 4,777 multi-core scores. Those scores aren’t terrible, but again put it behind competing phones such as the OnePlus 3, which boasts a 5,393 multi-core score.

On the gaming-focused 3DMark IceStorm Unlimited test, the Idol 4S scored 17,554. That puts it roughly on par with the Vodafone Smart Platinum 7, which scored a marginally better 17,811.

I’ve never been a fan of custom Android skins, especially since Marshmallow fixed most of the issues with the OS’s user interface. So it’s sad to see the Idol 4S running a heavily customised version of Android 6.0.1 Marshmallow.

Being fair, though, the skin isn’t the worst I’ve seen, and Alcatel has clearly been careful to not radically change the OS’s native UI.

At a basic level the only serious changes include replacing some of Android’s native app icons with Alcatel’s own, and loading it with a number of third-party applications. The icon changes are purely aesthetic, but in my mind they make the OS look a little childish. 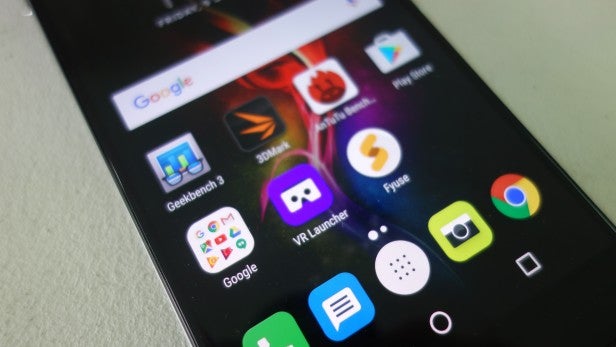 In the app tray you’ll find a number of apps designed for the VR headset, plus commonly used things like Deezer, the Gameloft Store, Swiftstar, the TiZR “lifesharing” service and WPS Office.

The inclusion of duplicate applications for music and photos, however, is a little more annoying. I’d have preferred it if Alcatel hadn’t felt the need to waste storage on the phone, flooding it with apps I won’t necessarily use.

I’m also slightly concerned the skin will impact the Idol 4S’s ability to be upgraded to Google’s latest Android Nougat. Skins always delay how fast Android phones can get an OS upgrade, as their code needs to be tweaked to work with Google’s. Alcatel couldn’t confirm whether the Idol 4S will be upgraded to Nougat at the time of publishing.

Alcatel’s VR headset aims to offer similar functionality to Samsung’s Gear VR. It works the exact same way and requires you to clip the phone into the front of the headset with a VR app running.

I’ve never been a fan of this approach to VR, as it generally offers a “VR-lite” experience with little to no opportunity for user interaction or gaming. You normally get to do things like watching movies in 2D on the headset, or explore 360-degree pictures and videos. It’s fun for the first hour, but usually loses its lustre fairly quickly. 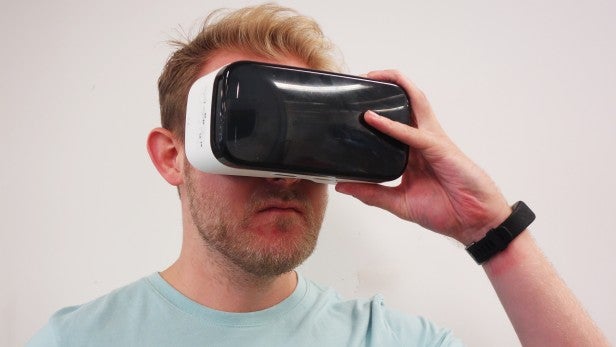 This remained the case on the Alcatel headset, which has a few niggling design flaws. For starters, a head strap isn’t included. If you want to enjoy VR,you’ll have to physically hold the headset up to your eyes, which quickly becomes tiresome. Secondly, it only has basic Back and Select controls. The two controls sit on the bottom of the headset and are fairly awkward to reach. I’d regularly accidentally exit the VR experience by clicking the wrong control.

I’d also have liked there to have been some way to adjust the VR headset’s focus. Throughout my entire time using it, images and video were legible but were way blurrier than I’d have liked, even when compared to using the Gear VR, which itself isn’t perfect.