What is the Alcatel A5 LED?

The Alcatel A5 LED is a budget phone. A quick glance at its specs would suggest that it would be the ideal alternative to the Lenovo Moto G5. But it’s a bit more flashy than that – literally. The Alcatel A5 LED has a disco on its back, making it the sort of phone you can picture in Calvin Harris’ pocket if he were a Nissan Micra driver rather than someone behind the wheel of a McLaren.

However, slow performance in parts and a camera that’s significantly worse than the competition make it a good buy only if you’re in love with the idea of being able to bring out a tiny light show at parties. 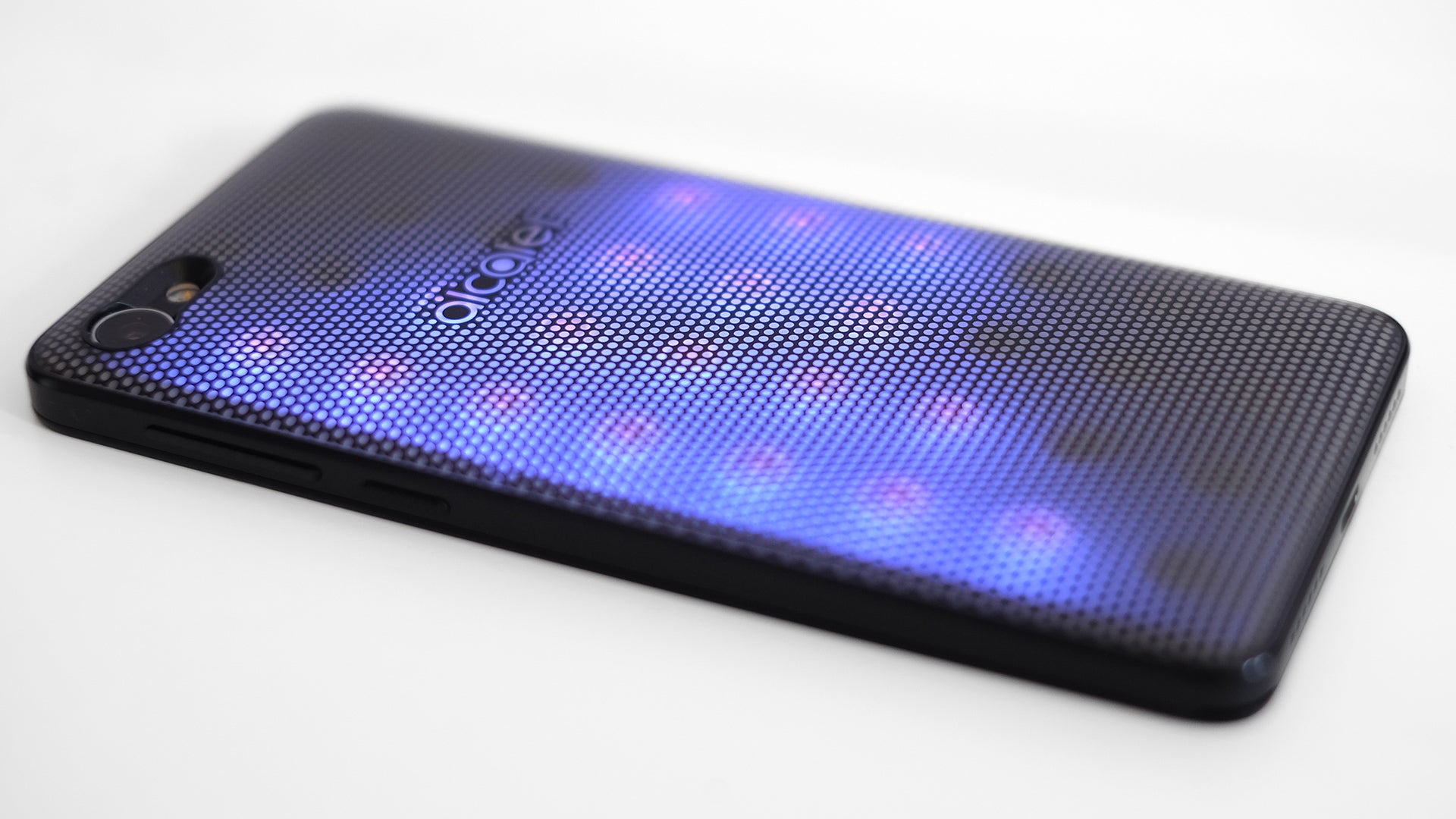 There’s one reason to buy the Alcatel A5 LED: the LED shell on its rear. It’s actually removable, but to call it a ‘case’ is a real disservice.

Twenty-five multi-colour LEDs produce a light show that turns the Alcatel A5 LED into a programmable mobile disco. When you use the phone as normal, those LEDs are dormant, making the rear look like it has a slim and stylish case attached, thanks in the main to the camera sitting below this shell. A honeycomb-like pattern of light-grey dots form a translucent plastic through which the LEDs shine. 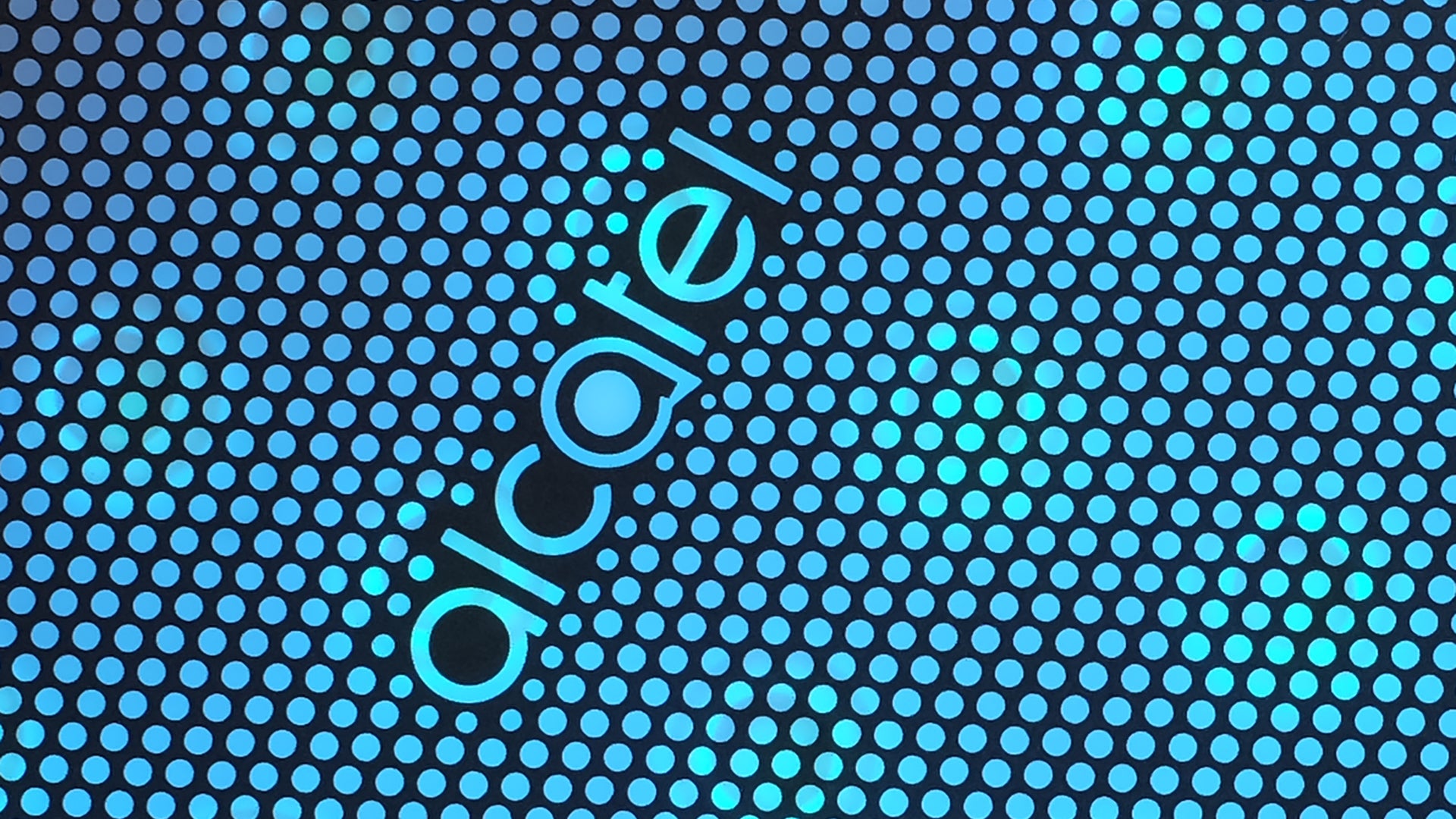 I tend to like my phones fairly plain. The Honor 9 borders on brash, and every now and then I take out the first-gen Moto G to remind myself that a phone lacking any stand-out design features can actually look quite nice. Miserably monotone as my taste may be, I think Alcatel has done well with this device’s rear. The diffusion of the light, those large-but-soft LEDs are signs of a job well done, particularly in a budget phone.

You can customise what the lights do too, using an app called Light Show. The two best uses for the LED cover are for music and notifications. 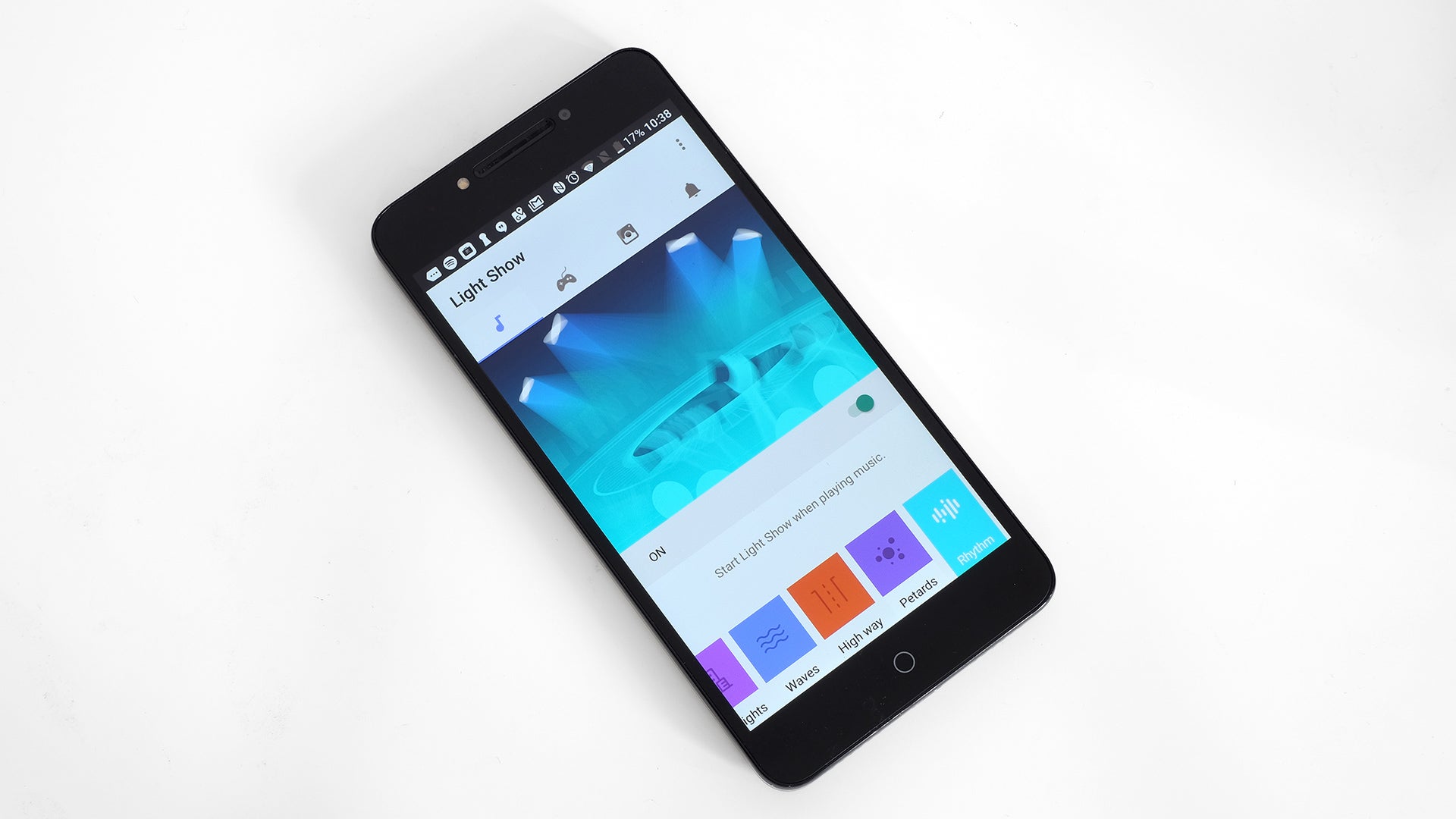 There’s a handful of presets for music light performances – including ones that ‘emulate’ rain, fireworks and shooting stars – that react to the music played. The Rhythm preset, for example, makes the lights act like an EQ waveform, changing colour constantly too. On receiving a notification, the first letter of the app in question scrolls across the screen on a coloured background.

What’s the point, I hear you ask? If you’re coming to the Alcatel A5 LED looking for utility, you’re missing the point. The LEDs are there for fun.

The Light Show app does have a crack at adding more obvious uses, in the form of a virtual electronic musician-style sample pad that plays  instrument clips and corresponding LEDs on the back as you tap. However, it’s pretty poor, and has clearly been made for a means to entertain young kids. 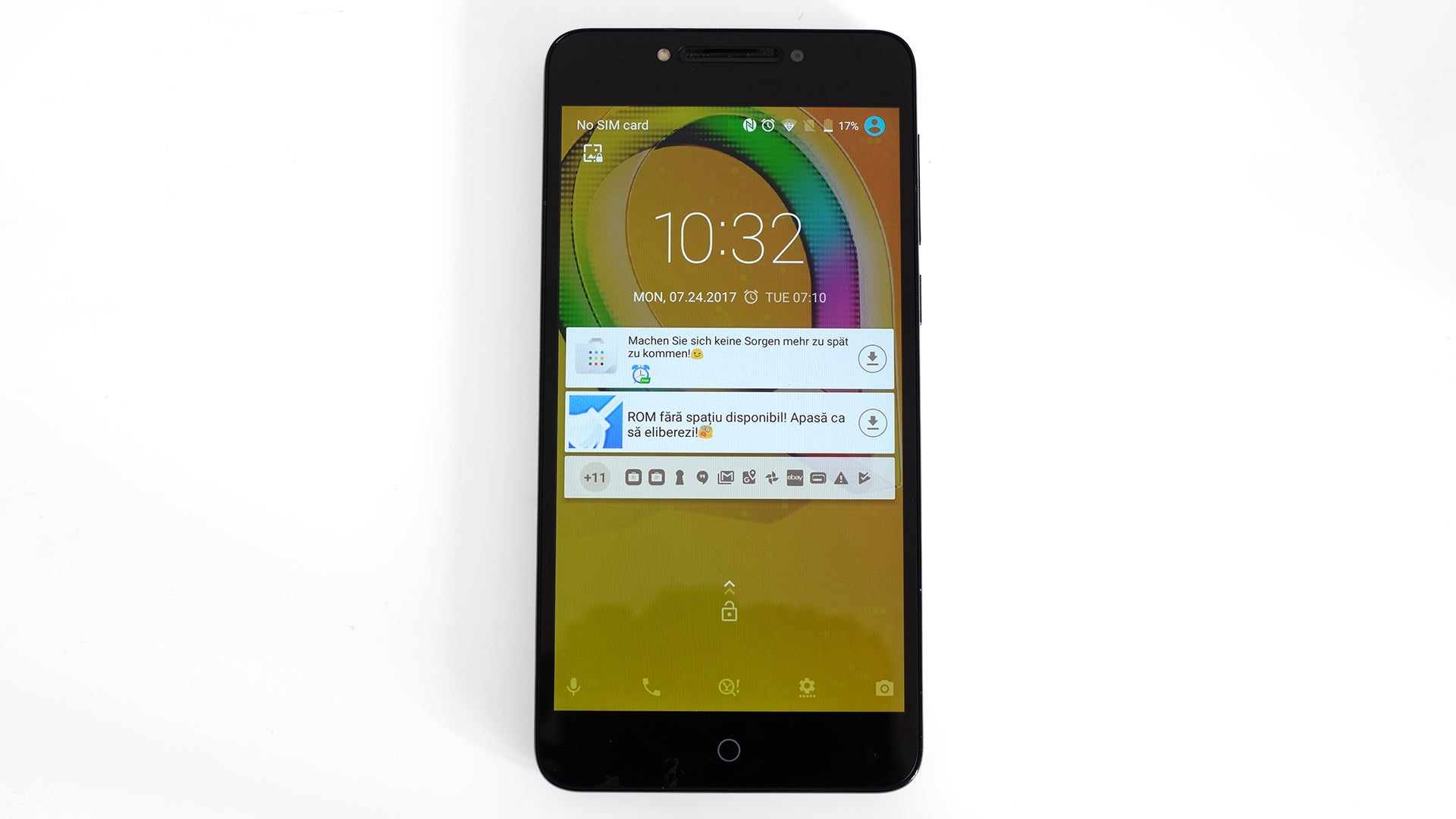 But enough about the light feature. Elsewhere, the Alcatel A5 LED is a solid-but-plain phone. It’s made of plastic, uses light-up soft keys (aside from the drawn-on central one) and, thanks to the case, is heavier than most devices at 170g. By comparison, the Moto G5 weighs 145g.

There’s also no sign here of any of the extra hardware features we’ve seen starting to drip down to cheaper phones. There’s no fingerprint scanner, and the Alcatel A5 LED has a micro-USB socket rather than new newer USB-C. 16GB storage and a microSD slot keep it up with the rest in other respects, though.

The Alcatel A5 LED has a 5-inch 720p IPS LCD screen. It isn’t as sharp as the Moto G5’s display, but this isn’t something that presented as an issue as I continued using the handset.

Colour is rather good for a budget phone and, unlike some models, the image appears right on the surface of the display. Low-rent LCDs can look recessed, which happens when the layers of a screen aren’t sandwiched together tightly enough. 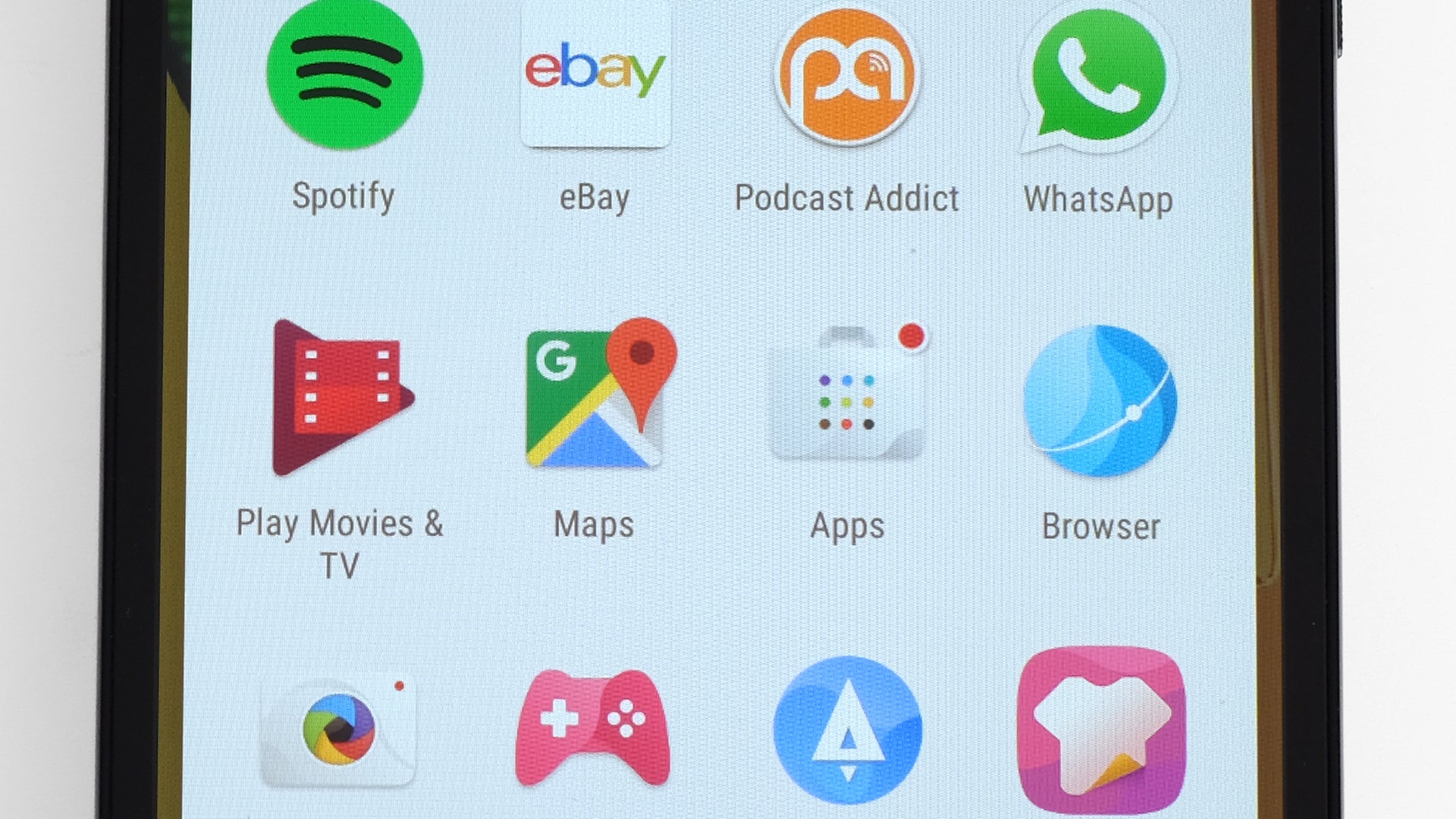 Those who like to play with the look of their phone’s screen will appreciated the MiraVision tool in the Alcatel A5 LED. This lets you alter the colour saturation, contrast and a few other elements. Both the ‘normal’ and ‘vivid’ modes look good as-is, but I did end up tweaking the colour temperature since the phone leans towards the blueish side as standard.

Like any good budget phone, the Alcatel A5 LED has an auto-brightness setting. Top brightness is fair rather than searing, and at certain angles there’s some colour/contrast shift, which signifies that this isn’t a top-drawer panel. Overall, however, the screen is fine.