When nVidia first announced that SLI would be making a comeback, geeks everywhere drooled over the prospect of having two 6800 Ultra’s whirring away in their machines. To most, SLI has been a no more than a pipe dream, requiring more money than a small country’s national debt – with even a single top end card being just out of reach. Now, with the mid-range cards such as the 7600 GT throwing quite a punch and fully supporting SLI, it’s no longer just an option for the obscenely rich but a decent upgrade route.


In reality, dual-graphics cards is the way of the future and is moving towards the mainstream like SMP (Symmetric Multi-Processing). At one point, having multiple processors was seen as a luxury – now Intel is suggesting everyone needs dual core to get the most out of what the PC can offer. 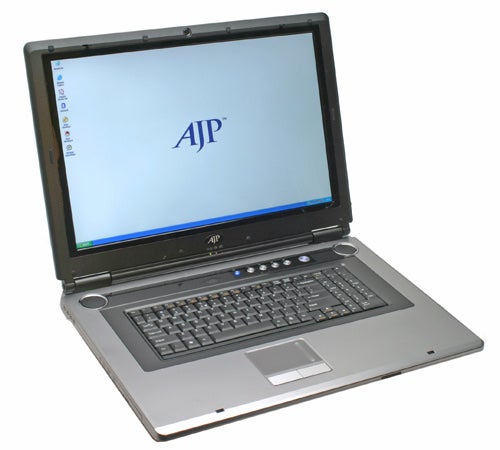 Two monitors, two graphics cards, two processors, two hard disks, dual-channel memory. Adding more than one is often the quickest way to improve performance and productivity. Internally, this is what ATI and nVidia have been doing for ages – adding more and more pipelines to their chip architecture at an ever increasing rate.


So when nVidia announced support for SLI in notebooks, I wasn’t entirely surprised. But when I saw what the first notebooks looked like – I was. This behemoth of a notebook from AJP weighs in at a shocking 6.6Kg (more than three times the weight of my Sony VAIO) with a 19in display running at 1,680 x 1, 050. As well as two GeForce GO 7800 GTX graphics chips, this nForce 4 SLI notebook has an AMD Turion 64 ML-40 which operates at 2.2GHz. It’s surprising not to see an X2 used instead, but considering the heat this chassis has to cope with already, we’ll have to make do. Not to say the Turion isn’t an excellent processor, but if you were buying a top of the range desktop machine you wouldn’t skimp on a single core processor.

On the plus side, we do get 2GB of memory and a fast SATA 100GB hard drive. Compared to a desktop, that’s not a lot of storage – so most people will want to run out and buy an external hard drive straight away. If that doesn’t seem so appetising to you, there is a dual layer 8x DVD burner that will be enable you to burn your TV shows to DVD instead of letting them clog up the hard drive.

The AJP has inbuilt 11/54Mbit wireless, Gigabit LAN and Bluetooth. If that isn’t enough connectivity, there are also five USB 2.0 ports, a mini FireWire connector, PC Card slot, SD/MMC reader, Modem and IR. A nice touch is that there are USB ports on the right side of the laptop as well as on the back.


There is also an in-built combined digital and analogue TV tuner, which makes one wish that Windows Media Center was supplied instead of plain old XP. This doesn’t use the standard RF input for the aerial and the adapter wasn’t included. Neither was the software, but we assume that if you purchased this machine, you would get everything you need. There’s also S-video input, via the same TV tuner. S-Video output is also available, but considering the size of the screen – I can’t see this being used! There is a dual-link DVI port that would be more suitable for external output. 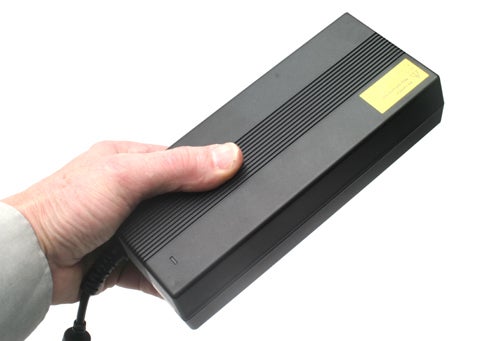 The laptop has a strong build, but then I wouldn’t be surprised if it had a steel girder construction keeping it in one piece. The keyboard is full sized and the touch pad is a fairly standard affair.


Recently, I took at look at three gaming notebooks based on a single GeForce GO 7800 GTX. Even these came with a 1,920 x 1,200 display (including the AJP), but judging from this notebook, for some reason adding a second graphics card means you’d only want a 1,680×1,050 display. This kind of defeats the point of having SLI in the first place. 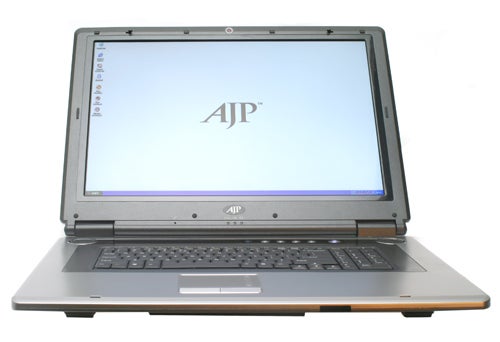 My next issue is the sound. The speakers in the machine are pretty poor (despite apparently having a separate sub-woofer hidden in the chassis) but that’s a given with notebooks. However, even when listening to music through headphones, sound quality is awful with the lower end almost completely distorted. On top of this, there is a huge amount of feedback being picked up somewhere along the way. This was especially noticeable when playing games – the noise would speed up and slow down depending on what the cooling fans where doing. There is a digital output that would naturally be devoid of such issues, but would also require a separate decoder which is not likely in the case of headphones. 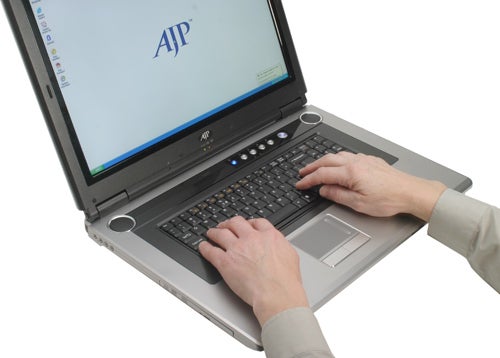 Another gripe is the huge power block needed. You can’t actually use this machine on your lap as it would block off the cooling vents for the graphics cards, so you need to properly sit it on a desk. If you tried to use it on the train you’d take up most of a table on a train, if not most of the train. Factor in its weight and this is about as portable as a small desktop. Wouldn’t it have been better if AJP just removed the battery and made this mains operated only?


On the plus side, the 19in display is pleasant to use and the notebook isn’t very noisy at all, (which you wouldn’t expect of an SLI notebook).


Using our proprietary automated benchmarking suite, aptly dubbed “SpodeMark 3D”, I ran Call of Duty 2, Counter Strike: Source, Quake 4, Battlefield 2 and 3DMark 06. Bar 3DMark06, these all run using our in-house pre-recorded timedemos in the most intense sections of each game I could find. Each setting is run three times and the average is taken, for reproducible and accurate results.

We used the driver that came with the notebook, which was ForceWare 83.90. AJP has been sneaky enough to set the quality balance setting to “performance” which increases performance while sacrificing image quality. We put this back to “quality” which is the default setting.


We ran SpodeMark with both SLI on and off, to see how much improvement was gained by having a second card. We also compared to the recently reviewed Mesh X-treme FX-60 which uses two 7800 GTs in SLI. This is not a particularly good example of a gaming machine, but it also came with a native 1,680 x 1,050 panel so felt it would be a good comparison.


In our own subjective tests, we found game play to be pretty good – although there were some possible timing issues as despite high frame rates, playback seemed a little jerky. We are hoping (and have been told) this will be covered in a future driver release.

Quake 4 gave us exceptionally high frame rates in both single card and SLI modes, but didn’t scale as high as we’d have expected. What was most alarming, was how much better the Mesh machine was – absolutely wiping the floor with the SLI notebook, without any optimizations for dual-core at all.


Battlefield 2 gave the strangest results, with SLI actually scoring less than a single card. This is a sure sign that there may well be thermal throttling taking place. With 3DMark06 only showing a 50 per cent improvement too (it should be much higher), this adds more evidence towards this too. nVidia assure me that Clevo (who make this chassis for AJP) have fixed any throttling issues in a newer revision of the chassis. I think the issue is a little more serious than needing minor tweaks to the chassis. 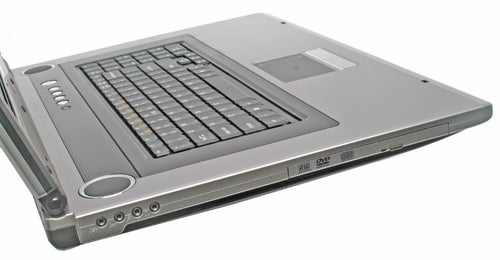 The AJP is £2,466 including VAT with a three year collect and return warranty. To be frank though, this is a supremely heavy, overpriced, and unbalanced product demo. SLI is available in notebooks – great! But I wouldn’t lug this around if I was paid to.


It was shocking to see that the Mesh machine was considerably faster than the AJP, yet based around supposedly slower graphics technology and over £500 cheaper. Considering that your not really getting real portability it’s not really worth the extra.


If you are really interested in SLI in a notebook, keep hold of your money until 7900 GT hits the mobile area. It’s more efficient design should make for much smaller, cooler laptops and hopefully a more reasonable price.


Technically this may be a notebook, but it may as well be an expensive desktop. Maybe Land Rover will learn from this by changing the angle of the boot on a Discovery and start calling it a hatch-back.