Coming with a neat app and voice control, the AirGo Smart Fan is designed for modern living – but without the price of its more expensive rivals. It's quiet in operation, too. However, it lacks the maximum speed of some rivals and the constant blue lights prove distracting when you're trying to sleep.

If you’re looking for a smart fan, then you may believe your options are limited to Dyson alone. Well, there is another player on the block: the AirGo Smart Fan is a traditional tower fan that can hook up to your Wi-Fi to provide voice and app control, plus some neat automation features.

A decent fan in its own right, the extra features may prove handy for some. However, others may find that a few little niggles make it unsuitable for use at night.

AirGo Smart Fan – What you need to know

AirGo Smart Fan design and features – A neat and powerful app, but there’s no control over the bright blue lights

There’s a bit of assembly to get the AirGo Smart Fan ready for use. In the main it’s easy work, but trying to get the retaining collar around both bits of the fan cage is fiddly. Lucky then that this is a job you’ll only have to do once. Decked out in black the fan looks neat, and it feels robust, too. There’s a decent amount of weight to the stand, which means that the fan is hard to knock over by accident.

Underneath the main fan sits a control panel that’s awash with blue lights and touch-sensitive buttons to control the fan’s modes. It’s a shame these lights can’t be turned off – or, at a minimum, dimmed. I found them super-distracting at night-time, making it difficult to sleep. 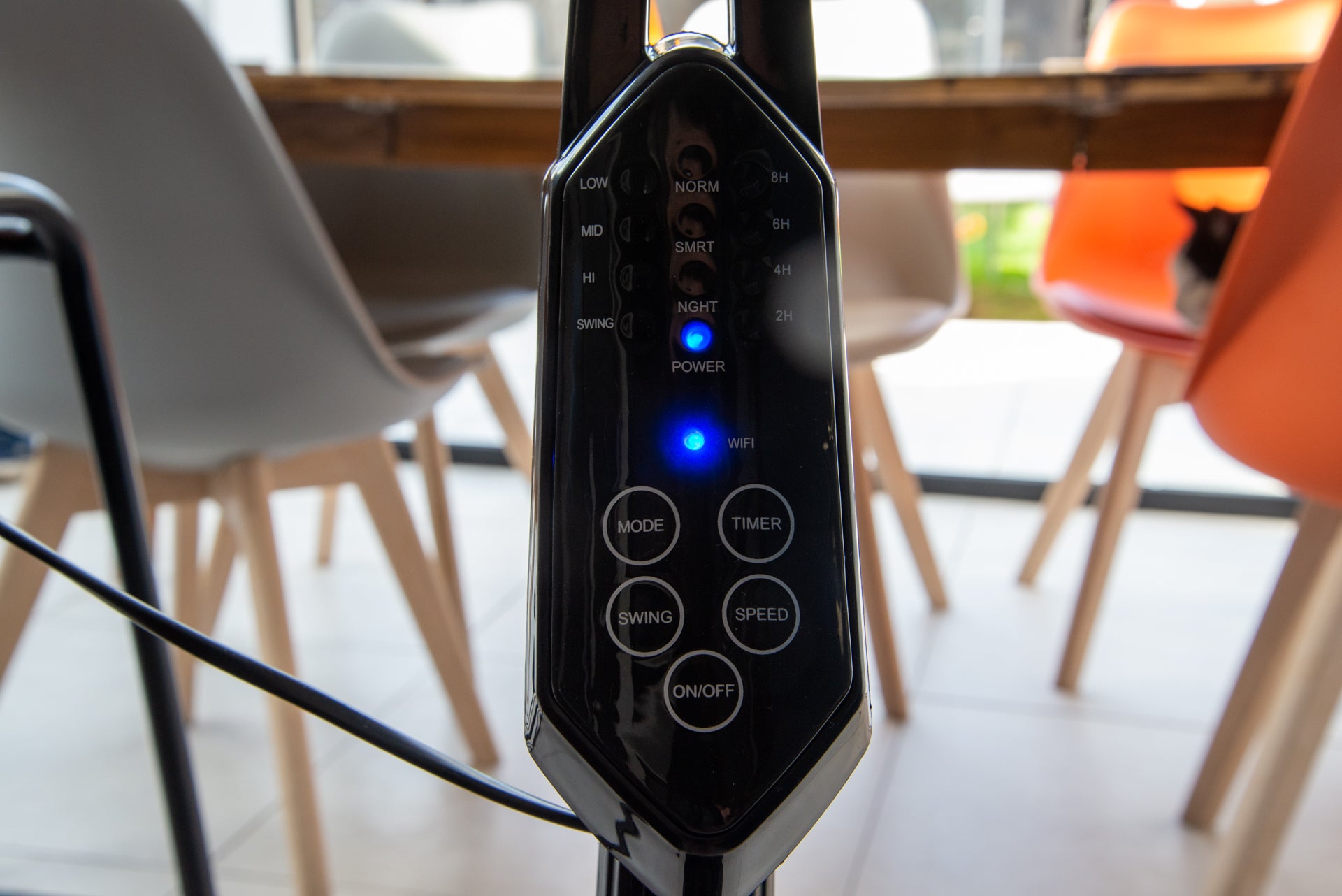 The control panel lets you adjust all settings, but not the blue lights

The control panel provides options to select from three speeds, plus horizontal oscillation (you can angle the head up and down manually). There’s also a timer, which has two, four, six and eight-hour options. A slightly shorter option would have been welcome, too.

As well as three fan speeds, the AirGo Smart Fan has three fan modes. Normal blows out cold air at a constant speed; Smart increases and decreases the speed of the fan to make it feel more like a regular breeze; Night does something quite similar to Smart.

The problem with these modes is that as the fan mode ramps up and down, the volume changes, too, which can be distracting at night. Neither mode is as good as the Breeze mode on the Dyson Pure Humidify+Cool, which works by varying the amount of air directed at you, while maintaining a constant fan speed.

Hook up the fan to your Wi-Fi, and you’ll be able to control the AirGo Smart Fan via the app. App control provides the same controls as seen on the fan’s body. It’s generally quicker to use the fan controls, but the app can save a journey if you’re feeling lazy. 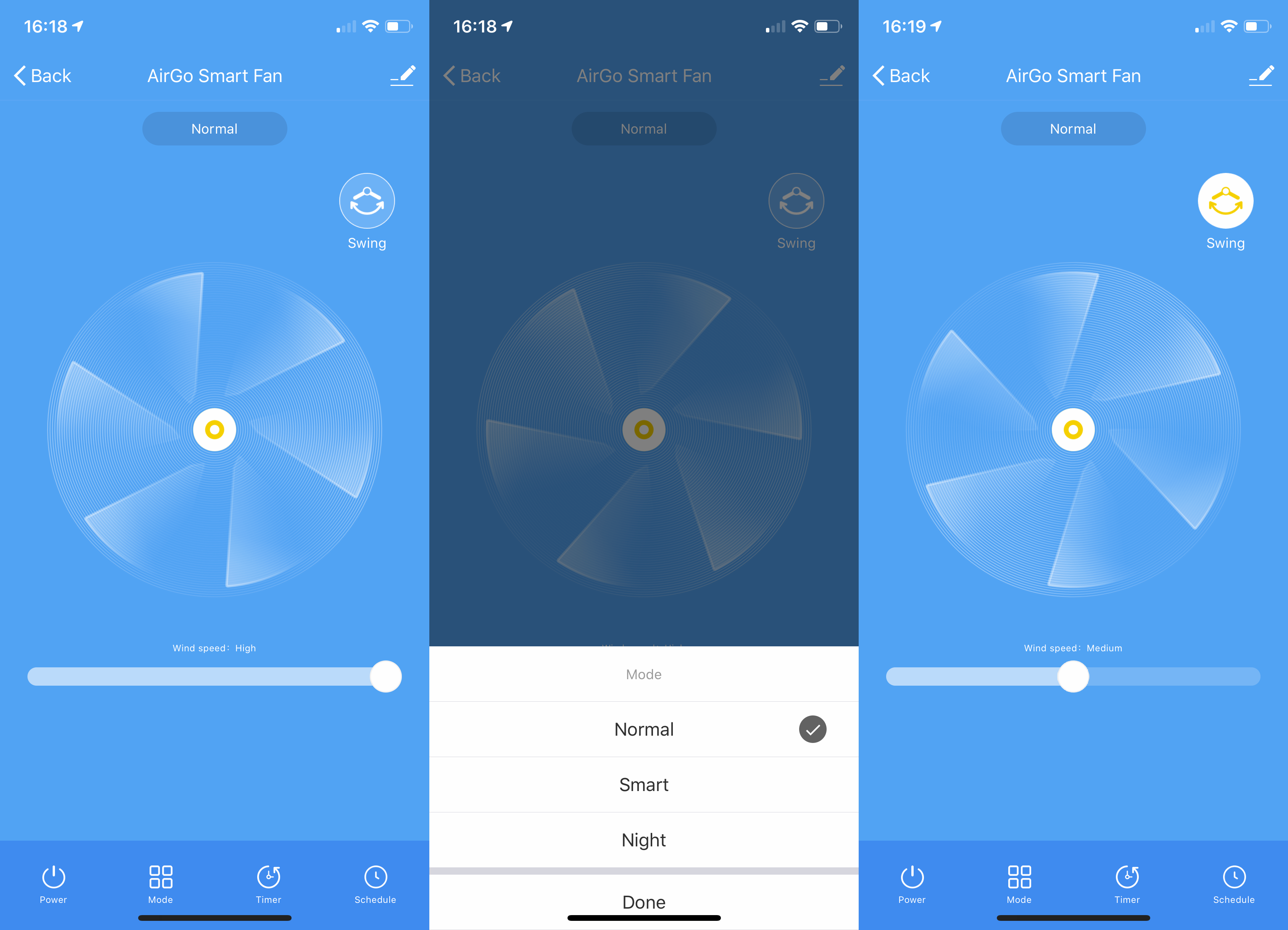 The app lets you control the fan from anywhere

Beyond the direct controls, you can set up a schedule for the fan, having it turn on or off at particular times, and you can choose which mode and fan speed you want, and if you want oscillation on or off.

There’s a more complicated set of automation controls that, confusingly, are found on the app’s home screen, rather than the fan’s control page. These let you turn the fan on or off based on pulled-in weather conditions for your area – say, turning the fan on when it’s humid to move air around. I’m not sure how useful these will be, since the fan is simply reacting to general information (humidity is described as Dry, Comfortable or Moist), rather than local information in your home. 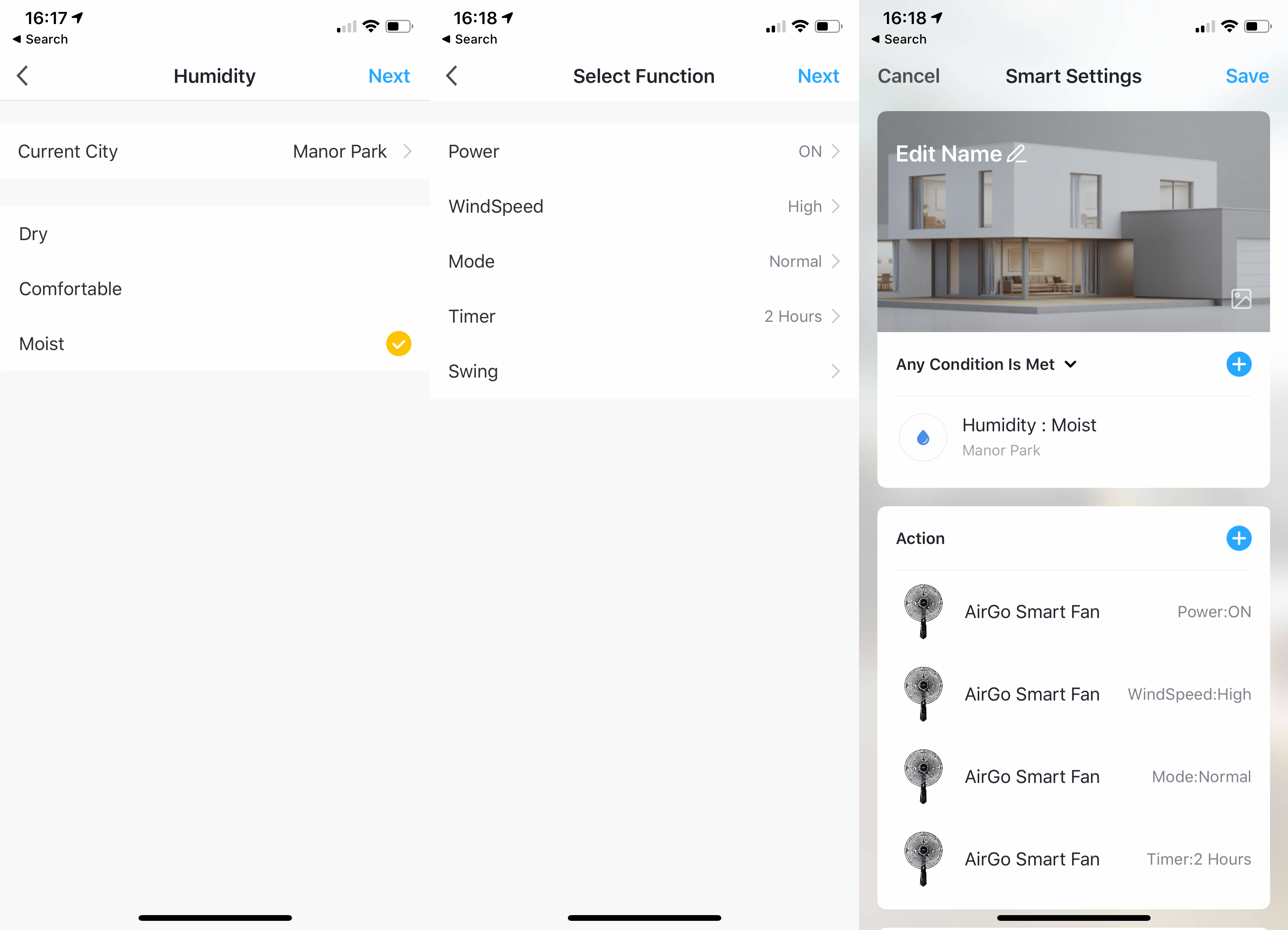 You can automatically control the fan based on external weather conditions

Arguably more useful are the Amazon Alexa and Google Assistant skills, which let you control the fan speed or turn it on or off. It’s handy if it’s night and you want the fan on or off, as you don’t have to move. It’s a shame that you can’t control the fan’s other modes, though.

AirGo Smart Fan performance – Good at distance, but could do with a bit more range

All fans are tested in the same way. To start, I measured how fast the fan can move air, both at close range and further away. On Lo speed at 15cm, I registered an air speed of 1.4m/s; at 1m, this dropped to 1.1m/s. On Hi speed air speed was 2m/s at 15cm, and 1.5m/s at 1.5m. Although there’s little drop-off at distance, this fan could do with a slightly more powerful Hi speed and a little slower Lo speed.

Should you buy the AirGo Smart Fan?

Dyson’s smart fans offer a greater number of features and are quieter, but they’re also a lot more expensive than the AirGo Smart Fan. The app control here provides the lazy option for managing the fan, but it’s the voice controls that make this model really easy to use.

Performance is decent, with a good stream of air that doesn’t drop off much over distance. However, the trade-off is that you don’t get the max power of some other models. I didn’t have any concerns about the sound this fan emitted, particularly on Lo speed from over a metre away; you could easily sleep with this model running. However, those blue lights are hugely annoying.

If you like the idea of a standard fan with smart controls, the AirGo Smart Fan is a neat model – but the ability to turn off, or at least dim, those blue lights and a faster maximum speed would make it better.