The i70 is an intriguing attempt to inject new life into the Pico (or pocket) projector market.

It’s smaller than even most Pico projectors, fitting easily into a trouser pocket, yet includes full Wi-Fi connectivity with both computers and Apple/Android mobiles. It can be powered by internal battery too, meaning you can use it without any cables at all. 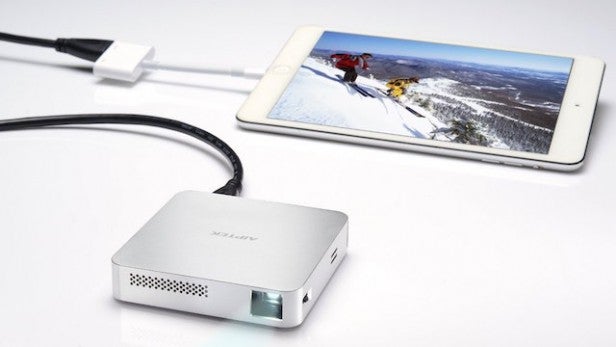 It also features an HDMI port, can supposedly deliver images up to 80 inches across, and allegedly employs a DLP chip typically found in large cinema projectors, potentially making it an option for movie nights as well as business presentations.

However, as you may have guessed, it turns out the i70 isn’t quite as fun and flexible in the flesh as it sounds on paper.

Even by Pico projector standards, the i70 really is tiny. Measuring just 85(w) x 85(d) x 17(h)mm and weighing just 136g, it slips easily into any pocket without even straining the seams. In fact, it’s so small and light that you can easily forget it’s in there.

It manages to pack a decent amount of style into its diminutive form thanks to a smooth, silvery finish and surprisingly minimal use of grilles and vents. Even the square lens housing looks kind of cool. 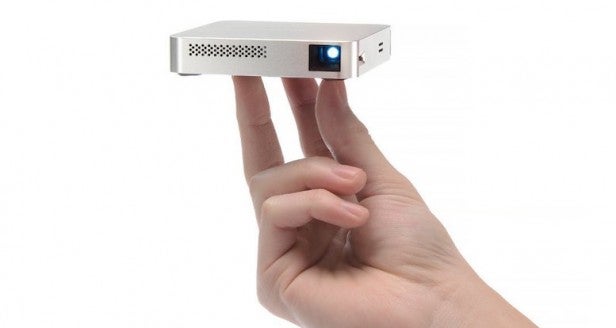 Its build quality is fairly basic; pretty much plastic all the way. However, while it’s fun to imagine the i70 being hewn from a solid block of aluminium or some other suitably shiny metal, such a finish was never going to be possible for the i70’s £235 asking price.

The i70’s lightweight build annoyingly means that the projector can easily become twisted round or tilted up or down simply by the tensile strength and weight of connected power/USB/HDMI cables. The only way I managed to fully get round this issue was by placing a small paperweight on the projector’s top – and you really don’t want to have to walk round with one of those in your pocket.

About now I’d usually mention a product’s remote control, but the i70 doesn’t have one. The only control available to you is a power button on the projector’s body – which you have to hold for a rather random eight seconds to turn on the projector. The projector auto-detects your wireless or HDMI sources as and when you fire them up.

Given that it doesn’t have any on-screen menus, a remote control or any controls bar a power button on its bodywork, there isn’t much to say regarding setup. 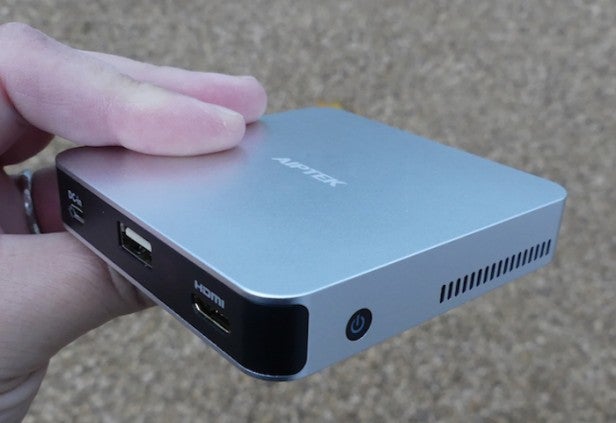 The tiny recessed lens has no zoom tools, so the image size will depend entirely on how far from your wall or screen you place the projector. To give you some idea of the distances involved, you can get a tiny 17-inch (43cm) image from a throw distance of 20 inches (51cm), or the projector’s maximum 80-inch (203cm) image from 98 inches (249cm) away.

There’s a focus wheel on the projector’s side, but the lack of any vertical image shift or keystone correction for straightening the image’s sides means that getting pictures to the height you want literally involves raising the projector’s mounting position to the necessary height.

This could be a real problem if you’re trying to use a high screen – unless you think standing up and holding the projector at the right height for the duration of a film or presentation sounds like a particularly fun thing to do.

The only setup menus the i70 provides are simple on-screen guides to getting your Apple or Android device talking to the projector, with PC connection covered in the very basic instructions pamphlet. 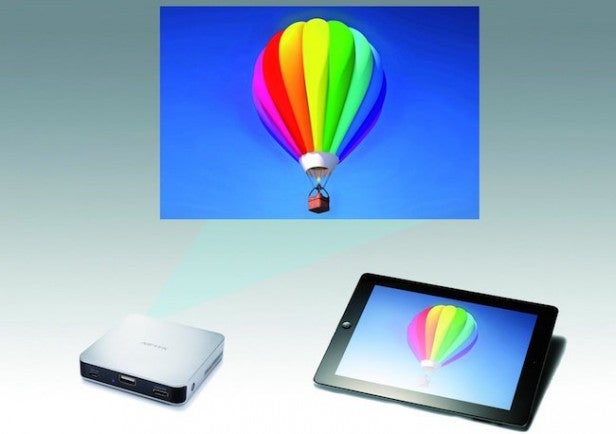 Unfortunately, during setup it became apparent that the i70 I’d been supplied with wasn’t compatible with iOS 10. When asked, Aiptek told me that earlier versions of the i70 would never be compatible with iOS 10 because the projector’s hardware is incompatible. However, anyone who buys one of the older models that doesn’t work with iOS should be able to return it for a replacement.

One final setup annoyance is that while the i70 ships with an HDMI to mini-HDMI cable, this cable is extremely short.