Sagem used to sell its own dye-sublimation, small-format photo printers in this country under its own name, but now they’re branded as Agfa photo printers. The AP2700 is the higher-end machine and comes complete with an LCD display, card readers and a TV output.


The printer is styled in black and silver and is roughly the size and shape of a packet of flour. That’s without the paper tray, which takes up to 25 sheets of 15 x 10cm, postcard-style paper and sticks out the front of the printer by some 200mm.


On top of the AP2700 is a 63mm LCD display, which hinges up to any convenient angle. A circle of control buttons offer simple print adjustments, with two soft function keys associated with actions displayed on the screen. In the centre of the circle is a four-way, menu navigation dial.


On the right-hand side of the printer are four sockets for the power supply, USB 2.0 connection to a computer, S-video connection to a TV and a PictBridge socket for plugging in a camera. On the other side are four slots, covering all the major types of camera memory card, including SmartMedia, a format largely left behind by photo printer makers.


As this is a dye-sublimation printer, the only consumable is the thin film on which the coloured bands of wax are coated. The film is mounted on two rollers and although it’s very flimsy, it’s easy to fit, because of the clamshell design of the printer. Hinge the top half up and you can drop each roller into its own pair of holders.


The dye-sublimation film supplied with the printer is only enough for five prints, which seems more than a little stingy and means you really do need to buy a separate film and paper pack, costing another £40, before you can do much work with the machine. 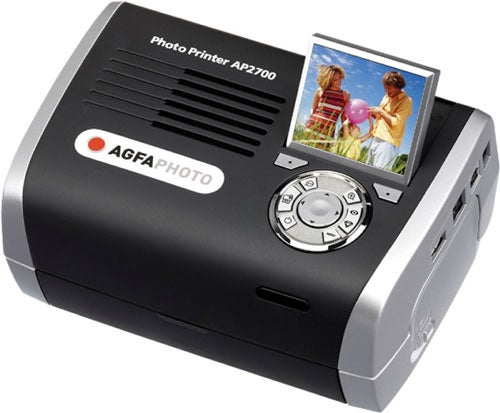 Bizarrely, each photo pack comes with its own miniature smartcard, about the size of an SD card. You have to slot the smartcard into the back of the printer and have the printer read it, before the new consumable can be used. This certainly ties you into genuine Agfa ribbons, which we guess is its main function.


Agfa supplies software called Companion Photo, which is little more than a device driver, so to supplement this there’s a copy off PhotoImpression 5 on the CD. This ArcSoft program handles most of the basics for printing and simple photo project work. There’s not much in the way of photo-editing, though.

The printer offers two quick-fix buttons, for red-eye and something Agfa (and Sagem before it) calls Crystal Image. Crystal Image increases the sharpness of a picture slightly and compensates for exposure and contrast problems, though in the images we tested with, it didn’t seem to make a lot of difference. You also wonder, if the effects of Crystal Image are all to the good, why not have it on by default? Red-eye removal is automatic, once it’s been switched on. There’s no need to zero in on the eyes you want to re-colour.


The last Sagem printer we looked at – the PrintEasy 110 – scored 10/10 for image quality, a rare accolade. Although this machine uses the same print engine, the prints this time weren’t quite as good. There’s not quite as much life in them and although the detail is still good, there’s a cooler, blueness which is less natural.


Agfa claims a print per minute from the AP2700 and we produced one in 61 seconds, when printing directly from a camera, so we wouldn’t dispute that. It’s a bit slower when printing from a PC, though, at around 1:12. 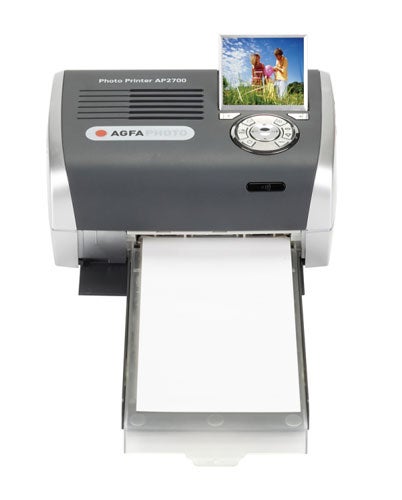 Like its predecessor, this is a fairly noisy printer, particularly when it’s feeding the paper through before printing. Since each print makes four passes for yellow, magenta, cyan and a clear, protective coating, it’s feeding the print through quite a bit. We measured the printer at peaks of just over 60dBA, so quite a bit noisier than a typical inkjet.


A 150-print pack, comprising print blanks and two 75-print ribbons, costs a penny under £40, giving a cost per print of 27p. This is quite a bit more than from the PrintEasy, where the pack was £10 less. The print cost isn’t good, given that the main inkjet machines are printing at under 20p per print and Kodak is threatening to reduce inkjet prints to under 10p.


It’s not often that a new model in an existing range isn’t up to its predecessor, but here Agfa’s AP2700 is more expensive to run and doesn’t give quite the print quality. While it offers useful extras, like its LCD display and TV output, you have to ask if the extra cost, nearly double, makes it worth it.