To paraphrase The Who, meet the New World, same as the Old World.


Of course, it doesn’t look the same. Three years on from the stunning Age of Mythology, Ensemble have once again raised the bar for strategy game visuals. Age of Empires III is beautiful to look at. Attractive in still screenshots, in motion it’s really something else. Just look at the gorgeous, shimmering water, the rugged contours of that unexplored landscape. Admire the detailed, brilliantly animated units, the settlers chopping trees, planting crops or hunting deer, the way that buildings splinter and shatter when they receive one cannon ball too many. Zoom in and check out the detail – the jumping fish, the wildlife, the smoke, the vegetation. Watch ships gliding along a channel between two tropical islands. Few games, full stop, have looked this good. 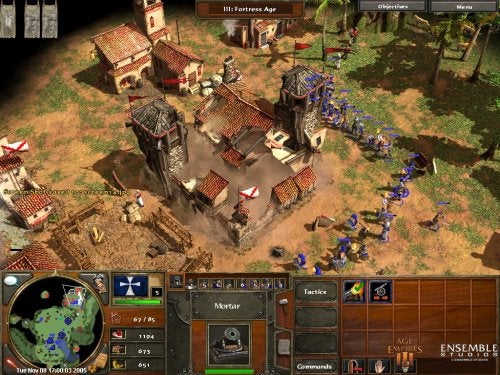 And on first impressions, the game underneath has undergone a transformation. It’s still an RTS, it’s still concerned with the old themes of base building, resource gathering and enemy crushing, but those themes have taken something of a twist. Firstly, like Age of Mythology, AoE III takes a story-based approach to the main single-player campaign. Tracking a family saga across three acts, taking in different historical eras and running from Malta through the Caribbean before settling down in the Americas, it gives you more than just conquest for motivation, with characters, cut-scenes and some nifty spots of conspiracy and betrayal to get your teeth into.


Secondly, the AoE III exploits its “European powers in the new world” theme by maintaining strong links between your colonizing forces and the homeland. In fact, the game’s biggest innovation is a new Home City screen, which will differ according to your chosen civilization: Spanish, British, French, Portuguese, Russian, Ottoman, German or Dutch. During campaign missions, single player skirmishes or even multi-player games, players can request shipments from their home cities, containing resources, troops, bonus abilities, and that general sort of thing. This is of enormous assistance, particularly when you need some help to shore up your defences in a hurry, or turn the tide of battle in your favour. 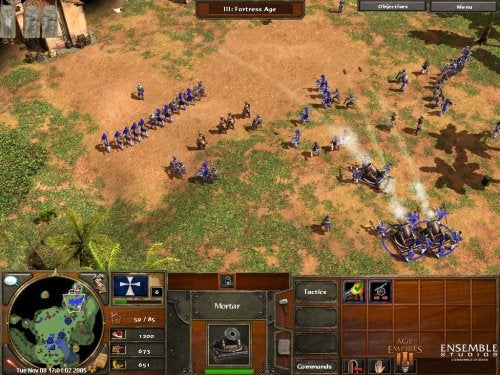 In return, victories won in the new world mean upgrades for the Home City, adding new shipping options to your selection. If you fancy, you can even make cosmetic changes to your city, transforming the look of buildings or choosing characters to bustle around in the background. Now, the Home City isn’t quite the killer feature Ensemble seem to think it is – it’s more a cool feature than a reason to keep playing – but it both ties the game together and gives you good reason to really get to grips with your choice of civilization. Naturally, this in itself has a downside: it practically discourages you from taking other civilizations for a spin, which when each has a slightly different flavour and different units and capabilities to enjoy, would be a shame.

Still, one thing has to be said. AoE III goes out of its way to hit you with differing objectives. The maps are littered with bonuses, which either your explorer – a hero character with upgradeable bonus characteristics – or your settlers can pick up. These are nearly always guarded, and in some campaign missions gathering these items becomes the primary objective of the game. In fact, it’s almost as if Ensemble is at pains to say that it’s not all just conquest this time around. In some missions, you may need to impress a pirate captain by building a reputation around Cuba. In another, you might need to find three navigational charts, or protect an Aztec temple. 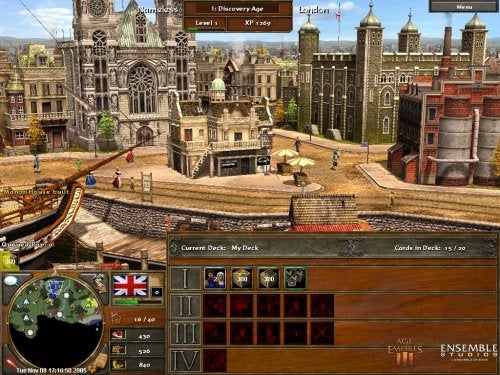 And it’s here that my misgivings start creeping in. For the most part, these treasures and objectives are little more than window dressing. It’s nice to get the gold, the experience points, the additional resources, but hardly essential. What’s more, it actually lends the game a slightly silly touch. How long will those three jaguars surround that stranded native before one has the sense to climb the rock he’s clinging to? Months? Years? What about the two settler girls tied to stakes by pirates? Why does every broken-down wagon bearing treasure provide a perfect home for alligators, wolves, or another selection of fierce predators?


Worse, where these objectives are tied into completing the mission, they can actually be a pain. In one early mission I had destroyed every enemy unit and building on the map, and all that was holding me back was one lousy treasure cache, which for some reason wasn’t showing up on the mini-map. Half an hour of checking every section of every island for the missing item isn’t exactly my idea of a good time. 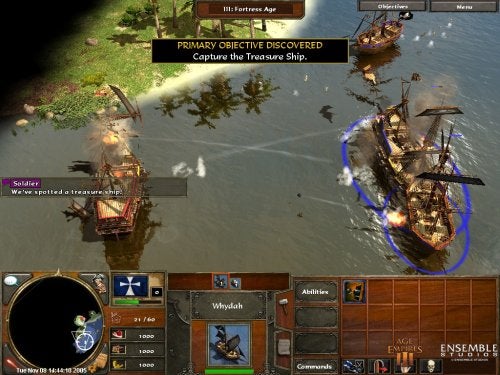 And once you take the alternative objectives and the Home city away, you’re stuck with – essentially – the same old historical RTS gameplay that you’ve already experienced a hundred times before. It looks great, it’s mostly good fun, but you can’t help feeling that you’ve already built this base, sent those units out to harvest, built the basic units and fortifications for defence, expanded and developed new bases, manufactured heavy units, then ganged up to trample the enemy and wipe their bases out. In fact, you’ve already done it in umpteen other games, and while it probably never looked as good, it was probably just as much fun, and sometimes more than that.

You see, the problems run deeper than not taking this tired genre somewhere new, in that Age of Empires III doesn’t fix many of the existing problems that have dogged the RTS since its inception. Resource management has been streamlined and it works a million times more effectively than in some RTS games I can mention, but it’s still a chore to have to reassign jobs to idle settlers when they run out of turkeys to slaughter or trees to cut down. Don’t these plucky pioneers have minds of their own? And what about the troops? They’ll still happily stand around in the centre of your colony, possibly discussing last night’s dinner or the girls back home, while an enemy force is busy torching vital buildings to the south, all within sight and hearing. Come on chaps, use your initiative! 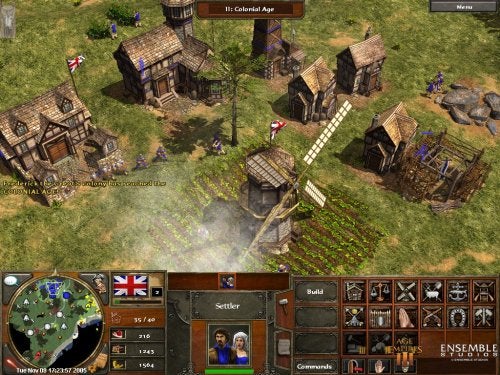 Actually, troop behaviour is a real bugbear all round, because it’s almost impossible to apply any sort of form or discipline to your units. Yes, in time-honoured fashion you can group units together, assign those groups to hotkeys and try and coordinate attacking forces or defensive lines that way, but in practice these guys either want to do nothing, or they want to steam in and wreck everyone and everything. As a result, every battle, no matter how big, degrades into a mob scuffle. It’s peculiar – the game clearly has a huge variety of troop types and some kind of regard for movement speed and terrain, yet there still seems precious little room for real combat strategy. The guy with more and bigger guns – or at least the resources to get more guns to the frontline if he needs to – wins every time. Something tells me that they won’t be using AoE III for the next series of Time Commanders. 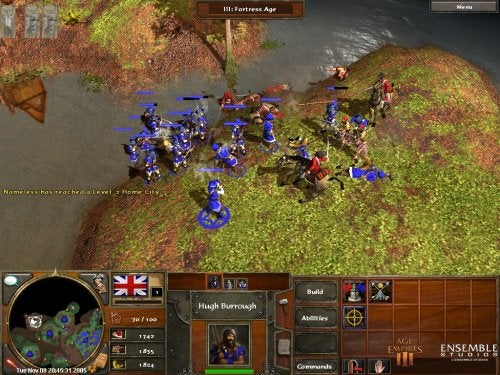 
Now I don’t want to do Ensemble’s latest down too much. It’s still a slick, enjoyable, lengthy RTS with a huge range of units to try out, a clear, player-friendly interface and a respectable learning curve. And it is really, really lovely to look at. That’s a lot more than you can say for, say, Alexander or Empire Earth II. But that is all you can say about it. The shame of it is that we thought it would take us on a journey of discovery, but instead we’ve just found a nicer looking version of the same old lands we’ve conquered so many times before.