A fair few among us here at TrustedReviews are big fans of Channel 4 show Grand Designs, regularly tuning in to look on incredulously as people spend hundreds of thousands of pounds in pursuit of their dream homes. We also like to shout – or rather I like to shout – at the TV disclaiming I’d do better if only I could afford to buy a house. In which case, I’ll find out in about thirty years time.


If I were to have my own Grand Design I can say now that, among the other gadgetry paraphernalia that would inevitably ensue, the FotoVivo V10 Digital Photo Frame would fit in very nicely. It’s an award winning design, and once unwrapped one can easily see why. 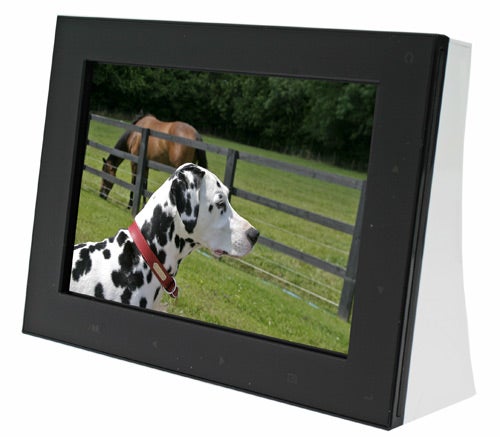 From a design point of view it’s effortlessly stylish while remaining perfectly functional in the same breath. The jet black fascia coupled with a pure white back is a classic combination, while a simple sloped design creates a stand enabling the photo frame to sit comfortably in landscape or portrait positions. The final touch is a set of backlit touch sensitive controls on the front on the frame, which are both attractive and very easy to use.


All in all, it makes the Parrot Bluetooth Photo Viewer look exceedingly perfunctory and even the well designed Philips Digital Photo Frame pales in insignificance to AG Neovo’s design. It really is that good, and instantly puts the FotoVivo V10 on solid footing.

Feature wise AG Neovo has stuck to copying Philips’ lead almost to the letter, though there are some minor differences. Though it still lacks any kind of wireless connectivity – a desirable feature in my opinion – there’s no shortage of memory card slots with support for SD/MMC/MS cards from one and Compact Flash and Micro Drive from another.


One area where the V10 certainly trumps Philips’ efforts however is in internal memory, with a healthy 128MB to supplement the inherent scalability of having a good selection of memory card slots. This, in contrast to the Philips’ measly 18MB is a veritable feast of capacity, only adding to the appeal.

Getting images onto the device is perfectly simple, with a mini-USB port tucked away behind the flap on the top where the memory card slots and power button are also located. This, using the provided cable, enables you to connect to a PC. The V10 uses drag-and-drop, thus bypassing any potential software pitfalls.


So it’s more or less clear that this is both a stunningly designed and well featured photo frame, but what about the display? Unlike the Philips photo frames the quoted 7in is actually the size of the screen rather than the whole frame. So the display is exactly 7 inches diagonally, with a resolution of 800 x 480. It also sports a contrast ratio of 400:1 and a 220 cd/m2 brightness rating. 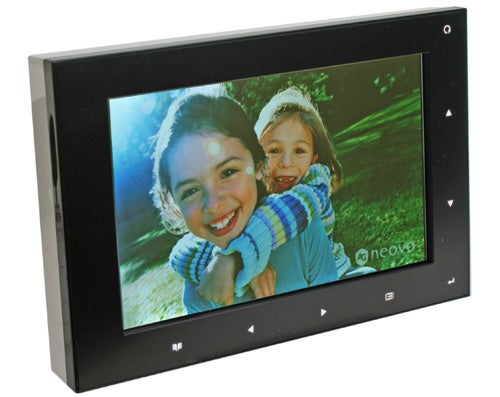 Generally I found the screen to be more or less on a par with the Philips I saw earlier this year. For the size of screen the brightness is pretty good, and images were crisp and clear. Viewing angles were okay, being good enough but nothing exceptional. If anything the V10 lacked a little in vibrancy, with more colourful images lacking a little impact. But, by current standards, it’s a good display and matches the bar set by others.


Where the V10 stands out, however, is in the general usability of the device. As already mentioned the touch sensitive buttons on the front of the frame are a great navigation tool. Menus are simple and logically laid out, though a few more options for file management wouldn’t have been a bad idea. In any case it’s certainly preferable to reaching behind the device to navigate ala the Philips and Parrot photo frames.


The touch sensitive buttons are arranged along the bottom and right of the frame, and when touched are backlit white for identification. Along the bottom are the Menu, Left, Right and Slideshow buttons, while on the right are the Enter, Down and Up buttons with a Rotation button in the top right corner. 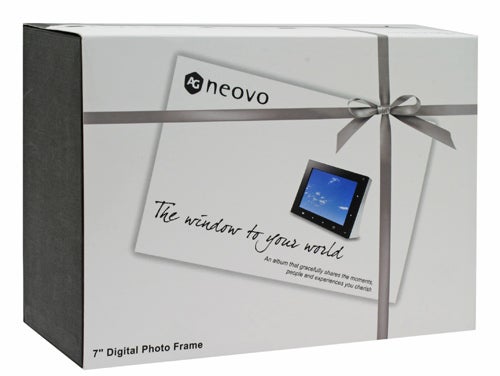 This signifies one of the few areas where the V10 disappoints. Unlike other photo frames I’ve looked at the V10 doesn’t feature any kind of internal motion sensor to detect what position it is in, relying on the rotation button to flip pictures around. In and of itself this isn’t the end of the world, but having played around with the device for a good deal of time now I’ve found that the V10 simply refuses to remember what mode to use between photos.


As a result while you can set an individual photo to be viewed in portrait mode, if you switch to another photo it will revert to landscape mode regardless of what position the frame is actually in. Consequently you can only effectively use slideshow in the landscape position, thus negating the possibility of, for example, having family portraits rotating on the display.

As with other digital photo frames there are plenty of slideshow options at your disposal, with a variety of interval timings, ordering and transition effects. Where the V10 did impress again was with the speed of the transition effects, which seemed far quicker and smoother than on other models.


Much like Philips’ competing range, the V10 also features an internal battery making it possible to sit down on the sofa with a relative and flick through photos at your leisure. The design of the V10 certainly helps in this regard, with no protruding stand to get in the way.

With the screen brightness at 100 per cent the battery was good for around an hour’s use, which is perfectly serviceable and could be extended by reducing the brightness of the screen. Other features include automated power on/off settings, which is something of an essential for a device of this type and naturally necessitates a clock and calendar functionally as well.


In general then it’s fair to say that AG Neovo’s 7in Digital Photo Frame is a great example of how this market should be handled. It has all – well most – of the requisite features one requires while looking far too stylish to be left lying around the TR office.


Still, it isn’t perfect, with the aforementioned problem with portrait viewing being a real concern. Were it not for that then it would probably be walking away with a Recommended Award, and possibly more. But it’s a significant problem, and makes the 7in Philips Digital Photo Frame an ever so slightly more complete solution despite the V10s clear advantage in design. In truth though there’s very little to choose between them, and both represent a great purchase if you’re in the market for a digital photo frame.