What is the AEG Rapido Bagless AG6106?

Do’h! You’ve knocked over the potpourri in the bathroom, what are you going to do? Reach for a small, light rechargeable handheld cleaner such as the AEG Rapido, of course. The AG6106 tested here is a dry vacuum boasting a long-life lithium battery, bagless convenience and a snap-clean filter.

While its suction power doesn’t compare to full-size cordless cleaners, it picks up light dust and debris with aplomb and the dock is super-convenient. The near-£90 price and sub 10-minute run-time for a four-hour charge isn’t great, but you can’t argue with the premise or build quality. It does the job it sets out to do. 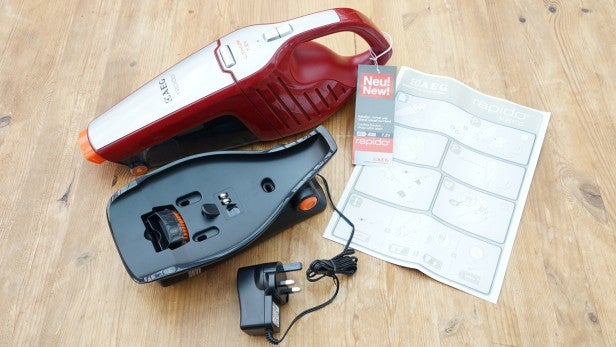 Crumbs on the tablecloth, pet hairballs on the laminate or dust on your windowsills – are they just too small a job to get out the main vacuum cleaner? AEG has the answer with its five-model strong Rapido series of rechargeable handheld cleaners.

Tested here is the dry-cleaning AG6106 model, finished in a fetching Watermelon Metallic Red – as AEG refers to its crimson hue. Given its near-£90 price, you won’t be surprised to discover that this isn’t simply a cheaply made dust-buster.

While lightweight, the AG6106 feels solid in hand with a multi-position grip and simple thumb controls for on/off and two-stage power on the top. At its heart is a small high-speed motor and AEG’s new Rapido fan technology, which promises to boost vacuuming by optimising the airflow. Air is drawn into the cleaner via a single cyclone, with dust and debris deposited in its compact 0.5-litre bin. 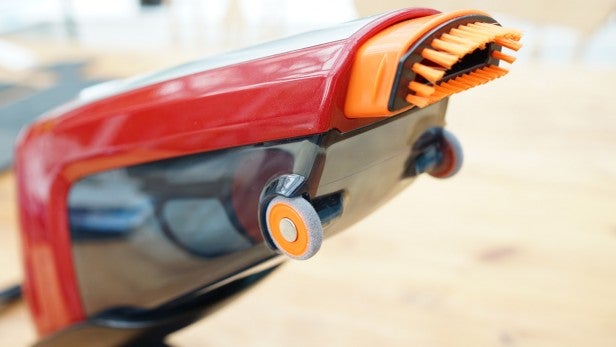 The cleaner splits in two parts halfway along, giving you access to the filter and bin. The filtration is in two stages, with a fine plastic mesh over AEG’s funky snap-clean filter. This folded textile filter has a spring-loaded pin that you pull out and let go half a dozen times to knock dust and debris out of its folds. Both filters and the whole bin are fully washable.

You can purchase spare filters, so you can get back to cleaning before the first filter is dry, although that does add a further £20 to the overall price. 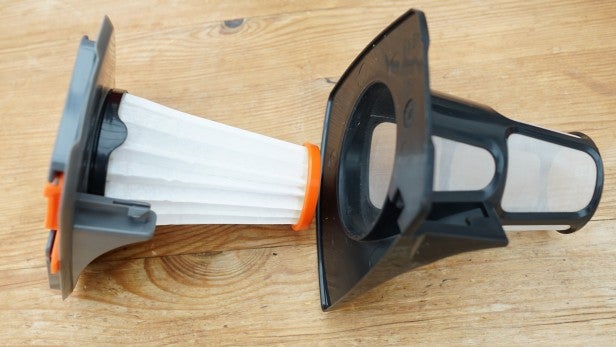 The unit is powered by a 7.2V lithium battery. Lithium cells have offer good life expectancy and don’t suffer gently reducing charge capacity over time in the way of the old-fashioned Ni-MH batteries. Placed in its dock, the Rapido’s batteries charge up in about four hours and promise between 10 and 14 minutes of cleaning, depending on the power level you choose.

The dock itself is a neat piece of plastic engineering that can be used flat or wall-mounted. For reasons we’re yet to fathom, the dock has a tilting mechanism that allows you to place the Rapido at a variety of angles. The cleaner drops neatly into the dock, no matter what angle it’s at, without any clipping-in or faffing about. 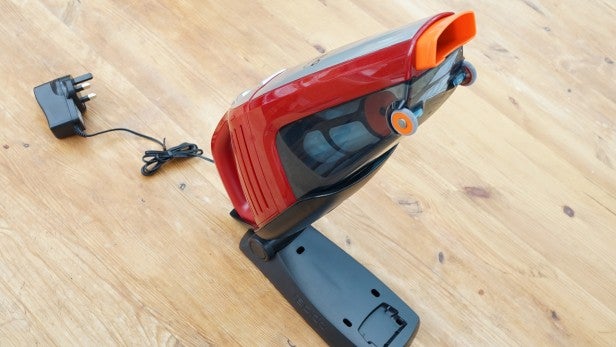 The package comes with a tiny clip-on brush that attaches to the extending nozzle, and a wall wart charger fitted to the dock.

At just 1kg in weight, the Rapido is certainly easy to handle. You can grab it at the back or closer to the top, depending on where you want to reach. Either way, the weight feels forward rather than balanced. AEG counters this with two small wheels at the front of the cleaner that support the weight on flat surfaces. The wheels are covered in a soft velvet material and roll with ease.

The orange plastic nozzle can be used parked into the machine or extended out some 7 or 8cm, where it clips into place. Once out we found it very stiff to push back in, but this should ease over time and use. For more delicate jobs the little dusting brush simply pushes into the end of the nozzle. 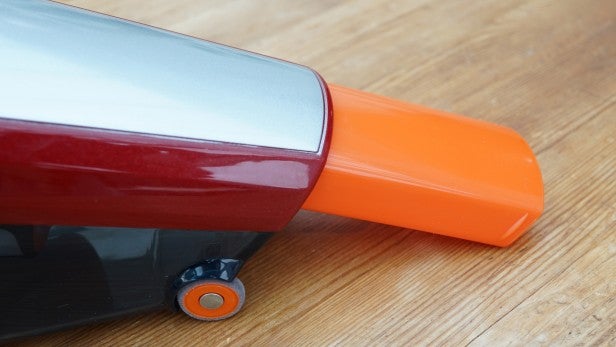 Of the two power modes, the highest is the one you’re likely to use most of the time. There’s a reasonable amount of suction at this level but we’re not talking anything like the airflow of full-size cordless cleaners – such as Dyson’s V series or Vax’s Air Cordless models. The lower power mode isn’t bad suction-wise, and from our tests added about 50% to the run-time. We managed around 9½ minutes on high power and about 14 minutes on low.

Heading around the house with the brush attached, the Rapido does a good job of cleaning up small spills and dusty areas. Running over a tablecloth, the wheels help to stop the cloth from being sucked onto the nozzle – but outside of that, we didn’t find the wheels really added much. It was just as easy to hold the cleaner and point it where it needed to go. 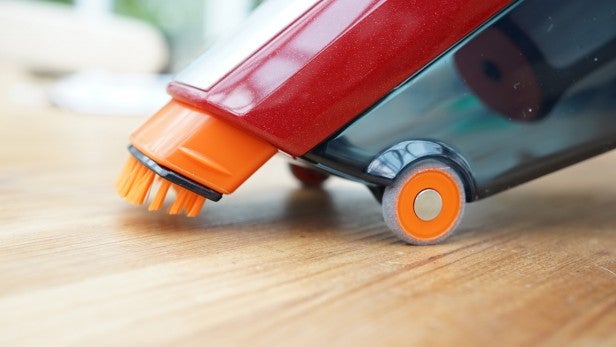 Its ultimate portability meant we started looking for and cleaning areas that are usually neglected when we have larger cleaners on test. Tops of skirting boards, around the windowsills and window frames in the conservatory, the PC keyboard and even the cutlery drawer all received a good buffing. The brush attachment helps to lift and agitate dirt and the Rapido works well for its intended purpose.

The manual suggests the dusting brush might also be good forupholstery. If you have a dolls house, then yes, possibly. In reality, the size of the brush and the run-time of the cleaner means you’d barely get one small chair cleaned before the Rapido would be in need of a recharge.

Nipping around the edge of the kitchen floor, picking up crumbs and pet hairs, necessitated removing the small dusting brush attachment. With it in place hairs simply became caught around the bristles and very quickly blocked the nozzle. Removing the brush allows even fair-size hairballs to be sucked neatly into the cleaner.

The problem here is that with nowhere to store the very small brush on the cleaner itself, chances are you’ll put it down and lose it. We did. Twice. 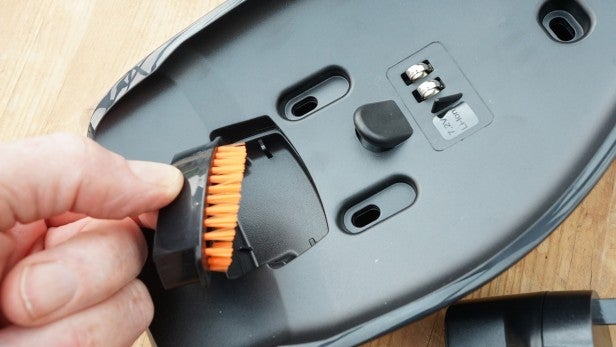 It would be easy to bemoan the sub 10-minute run-time on high power, but we’re not so sure it’s a big issue if you use the Rapido as it’s intended. Keeping it sat on its dock on charge and whipping it out for quick clean-ups is the way ahead. Don’t attempt to tackle the whole house in one session. Since the cleaner drops in and out of the dock easily, the Rapido is good for everyday use.

In our fairly mucky farmhouse with its muddy fields and two dogs, even light dusting duties mean that small cleaners need emptying frequently. In this respect, the 0.5-litre bin isn’t too bad and the Rapido has considerably larger capacity than many of its handheld peers. Yet there’s no getting away from the fact that emptying the bin is a messy affair.

Splitting the cleaner in two with the button on top is straightforward enough, revealing the rear end of the snap-clean filter and a small orange handle. You pull the handle out a few centimetres and let it go. Repeat this half a dozen times to dislodge most of the debris from the surface of the cloth filter. 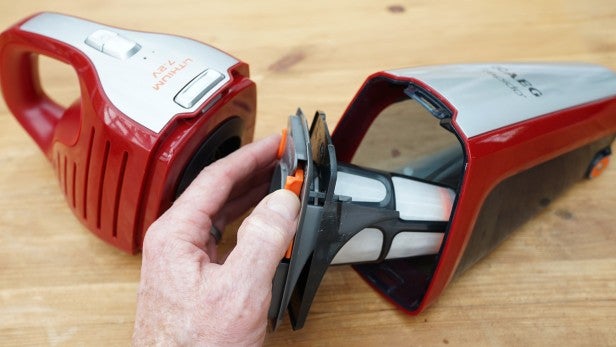 The idea is sound but you do have to hold the entire filter assembly in the bin while you do the snap cleaning. The orange clips that release the filter housing simply aren’t strong enough compared to the spring in the filter, so the whole filter will just pop out if you don’t hold it in place.

When you do intend to remove the filter, the assembly pulls apart into the two filter sections and bin. With only two hands available, it means you’re going to put part of the filter or bin down on a work surface during emptying, which will need cleaning up afterwards.

On the plus side, both parts of the filter and the bin can be fully immersed in water and thoroughly washed out. Which rather beggars the question why go to the bother of creating a snap-clean filter in the first place. 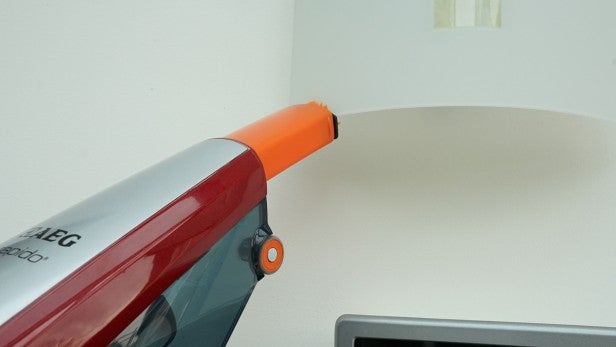 Should I buy the AEG Rapido Bagless AG6106?

AEG’s Rapido AG6106 is a well-designed and well-made handheld cleaner, ideal for quick clean-ups and light dusting duties. As long as you don’t expect major cleaning power, full-size cordless cleaner run-times or tools for every occasion, it’s very good at fulfilling its brief.

It isn’t what you’d call an essential device for the home and it isn’t cheap either, but if you need a gadget for that potpourri spill or crumbs on the tablecloth, the Rapido is a great little handheld cleaner.