Coming to PS4, Xbox One, Nintendo Switch and PC

Many companies have attempted to use the Adventure Time licence to capitalise on the success of the show. Oftentimes, the whole point of the series is missed when developers misplace the humour or, worse still, the actual adventuring. Choosing a template that combines exploration platforming with RPG elements and turn-based battle systems appears to deliver both of these integral points, finally hitting the nail on the head. This is Adventure Time; come on, tell your friends.

Starting out with Finn the Human and Jake the Dog, we find the Ice Kingdom is melting. Waters are rising and sections of the land of Ooo are being submerged beneath the waves. If this isn’t a cartoon metaphor for global warming, then I’ll eat my hat. But, global ecology aside, the duo set out to discover what’s going on, only to find that the string of events unraveling will lead them on a crazy adventure, touching on many moments from the TV show and collecting as many of the well-loved cast as possible.

It helps that the voicework is superb, only occasionally faltering from missteps in comic timing that come from loading in different lines. At times, a joke will fall flat because the punchline takes too long to load, or the visual gag loses impact for similar reasons. Away from these rare occurances, The Pirates of The Enchiridion feels as close as we’ll ever get to an interactive version of the show. The humour is on point, often referencing past plot lines; the characters have retained their personality and charisma; and the writing is consistently solid.

Whether in dialogue or background chatter, the feel of the show is intact. Of course, it’s littered with small nods that fans will lap up more than others, but the standard Adventure Time catchphrases emphasise the action nicely, as Finn slams his sword into an enemy and yells “mathematical” or “algebraic”. 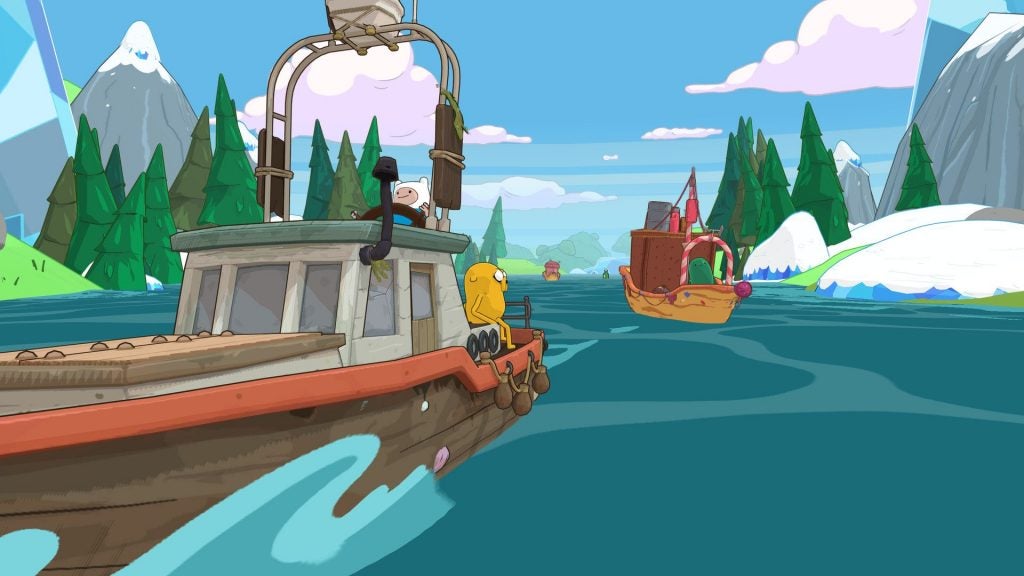 Much of the game sees the heroes exploring popular landmarks of the show, hunting for clues to their current mystery. Navigating the world is a genuine treat as colours burst from the screen, yet the exploration is stunted and shallow. Gameplay outside of fighting comes down to wandering around, smashing props that reward items and money, or fetching quests that force you to wander back and forth delivering random items to citizens as side-quests.

This somewhat robs the game of its fun, because platforming is minimal and the extra abilities from Jake – transforming into a scooter or growing in size to climb up to ledges – appear forced. There’s no need to speed around on Jake’s back, and his growing only really replaces the need for ladders, but it does so with an Adventure Time spin.

While out exploring, enemies will approach for fights that are quite unavoidable, although the game hints that you could lose them if you tried. It’s pointless; pretty much every section of the game requires the player to wade through groups of foes to progress. Fights play out as turn-based affairs, reminiscent of JRPGs. Standard attacks are the bread and butter, steadily building an abilities gauge at the top of the screen that unleashes larger attacks. For example, Jake can spin like a tornado slapping at enemies. Later, he upgrades to transforming his hands into axes, so it costs a little more. The balance here is interesting and adds an extra layer of strategic nuance.

Of course, items can be used to buff and debuff the party – which later extends to characters – and a superpower meter accompanies each hero and is filled via certain actions. Finn needs to land hits, whereas Marceline needs to deliver the finishing blows to enemies. Once the super meter is full, clicking the left thumbstick will result in a devastating attack.

The battles are generally enjoyable, not necessarily for the mechanics, but for the visual style. Jake transforming into a steamroller or Finn wielding his gauntlet seem pulled straight from the animator’s desk and will often raise a smile. This goes for the items, too, which range from apples to refill health to framed pictures that boost attacks or damage. Everything in Pirates of the Enchiridion is ordinary, but extraordinary. There’s nothing here that we haven’t seen before, except it’s turned up to eleven. 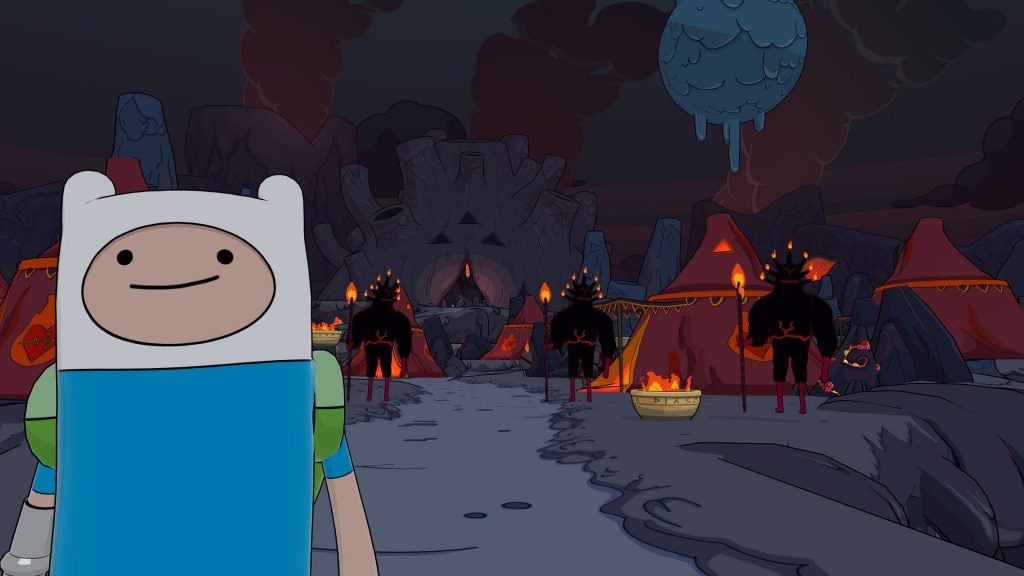 One interesting addition to the RPG style are the interrogation scenes. Certain NPCs will withhold information from you integral to story progression, so what better method to get them to talk than to play good cop, bad cop. A spinning disc in the corner must be stopped on the correct sections for the duo to take up the roles and exert either force or feelings on the subject. It’s the perfect time to showcase the humour, and it’s a fitting inclusion that allows for breaks in the fighting or the tepid exploration.

In other areas, the game suffers generally from minor bugs and annoyances. IT must be played with headphones as only important dialogue is subtitled, leaving the humorous background chatter lost. When Jake and Finn set sail on their boat to traverse the floods, there are so many great songs to be heard, but those hard of hearing ]will completely miss them. On the flipside, sometimes that background chatter carries on through cut-scenes, leaving an audio mess that damages an otherwise aesthetically pleasing game.

For die-hard fans, the basic adventuring punctuated with oddball antics and voicework is lovely to see. Recreations of the different kingdoms is a sight to behold, although the gameplay falls into an odd place.

The demographic feels lost. The exploration is ideal for kids who just want to stomp about as their favourite characters, but they could find the fighting too hard. RPG fans will find a lack of depth throughout, and unless they love Adventure Time, will quickly abandon it for something else.

So, while it feels like Adventure Time, the adventure isn’t one that many will want to go on.