Not since Kodak launched its first range of all-in-one printers three years ago has there been a new player in the UK printer market. It’s an interesting coincidence, then, that the latest player, PC World’s Advent brand – should be using Kodak print engines in its three new all-in-ones. These are all low-cost models, with the AWP10 the most expensive of the three. Even this machine costs just under £70, though, which is the entry-level price for some of its competitors. 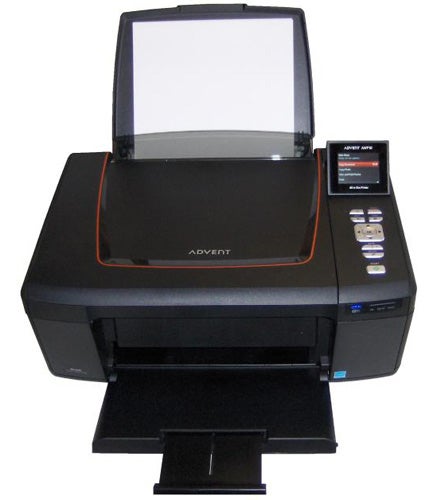 These aren’t simple rebadges of current Kodak machines; the marketing philosophy is very different. Kodak has an intentionally high purchase price, which it uses to offset the low cost of its cartridges. Few people can have missed the company’s recent saturation advertising, based around its ink costs.


The Advent machines are quite different, though, with low purchase prices and, as you’ll see, high running costs. This alone should differentiate the two ranges. The physical design is also quite different.


The AWP10 is surprisingly diminutive and is all cased in matt black plastic. The large flap covering half the depth of the machine lifts to become a paper input tray, which can be loaded with up to 100 sheets. It feeds through to an output tray that extends from the folded down front cover of the machine, giving it a surprisingly large footprint when open. If you need to feed photo paper, you have to remove the plain paper first. 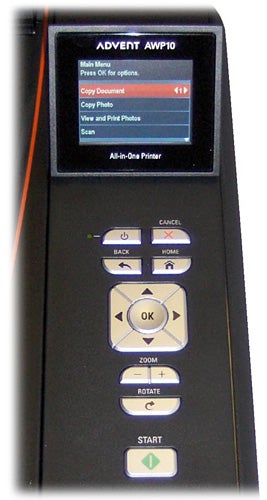 To the right of the CIS-based flatbed scanner is a simple, well laid out control panel, with controls to zoom and rotate images displayed on the 63mm LCD screen, as well as standard menu navigation controls. The full colour screen, which is unusual in a machine at this price, is bright and clear, easily up to displaying images from SD and MemoryStick cards, plugged into the single slot in the printer’s front edge.


At the back is a USB socket, but since this is the only machine in the Advent range to support wireless connection, most people choosing it will be connecting to their Wi-Fi routers. This is pretty straightforward with an on-screen keyboard for entering any security passcode, though we were surprised the machine only registered a fair signal strength to the wireless router on the other side of our lab, when most machines see the signal as excellent. It didn’t affect the printer’s performance, though. 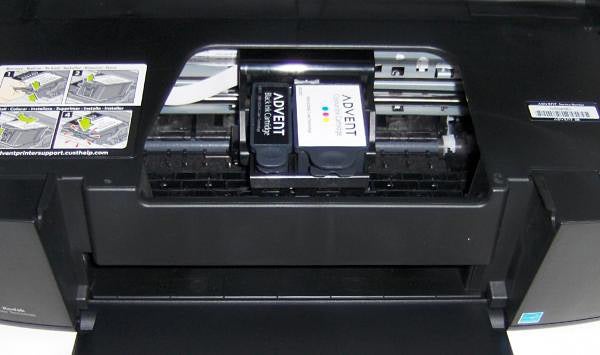 The printers are all Windows and OS X compatible, though there’s no mention of Linux support, as yet. Software support covers both scanning and photo uploading, as well as a printer driver.


The two ink cartridges, one black and the other tri-colour, plug into the printhead, which itself plugs into the carrier, in a similar way to Kodak’s own machines. It’s very quick and easy to set up and replace cartridges.

PC World rates the AWP10 at 6ppm printing black and 4ppm printing colour, neither speed being particularly adventurous. In our tests, we saw 4.7ppm on our 5-page black text document and 5.2ppm on the 20-page one. Our five-page black text and colour graphics document produced 3.3ppm, so the stated speeds are not that far off what you’re likely to see.


The machine does even better on copies and photo prints, where a single page colour copy took 34 seconds and a 15 x 10cm photo from an SD card took 41 seconds. Compare that with the £70 Canon PIXMA MX340, which took 41 seconds and 53 seconds, respectively. 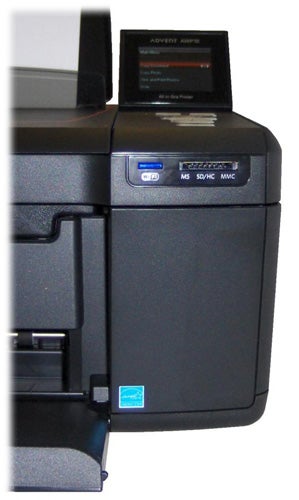 Kodak printers have always given good quality print and, even though this machine only uses CMYK with no photo black or cover coat, it’s still more than acceptable. Black text print is clear, with little sign of ink spread, though there are occasional misalignments that give some lines of characters a slight jitter. Draft print, which is a lot faster than normal mode, is still clear and well-formed and would be fine for internal documents.


Colours are bright and smooth, even on plain paper and photos give good, natural colours with high levels of detail in light and dark areas, though when you look closely you can see some dither patterns in gradated areas of colour.


The printer is quite noisy, particularly when feeding paper, and peaked at 66dBA. Depending on how often you print, you may want to put it on a separate stand, rather than at the end of the desk you work at. 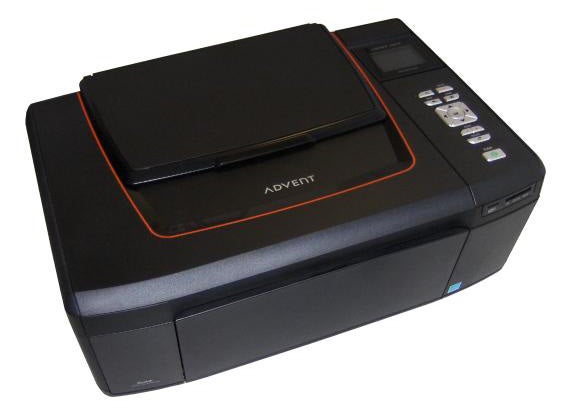 PC World has chosen to pitch the price of its consumables high. The black cartridge is £13 and the colour one is £22. With comparatively low yields of 225 and 250 pages, even compared with Kodak’s standard yields of 425 and 420 pages, the page costs come out at 6.6p for black and 15.4p for colour, including 0.7p for paper.


These are both high; compare them with the Canon machine, again, which has costs of 4.3p and 9.3p. The Advent is around 50 per cent more in both cases and the PIXMA MX340 isn’t a cheap machine to run in itself. PC World might like to reconsider these prices, which make the AWP10 the most expensive inkjet to print black and one of the most expensive to print colour that we’ve ever tested.


In case you were wondering, you can’t plug Kodak cartridges into the AWP10 and get a cheap printer and cheap consumables. The colour cartridge is only three-ink, to the Kodak’s five, and the black cartridge, although it fits in the printhead, isn’t recognised by the printer’s firmware.


PC World has done a good job working with Kodak to produce a low-cost, colour inkjet, with a good range of features for the price, fair speed and above average print quality. It’s then scuppered the project by pricing the consumables at a stupidly high level. The kind of people who buy an inexpensive printer are those who are going to get very cross when they discover they’ll have to pay half the cost of the machine again for every 250 pages they print.