PC World has started producing its own printers, or at least Kodak has started doing it for them. These printers are similar in some ways to Kodak’s own range, but there are significant differences, not least in the prices.


Kodak made a conscious decision, when it launched its first all-in-ones, that their asking price would be relatively high and a major selling point would be the correspondingly low cost of ink cartridges. This policy has done well for the company and carved it a niche in a crowded market, to which it arrived late. 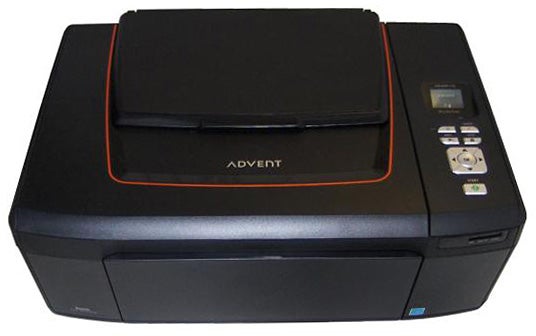 PC World, part of the Dixons Stores Group (DSG), works in a different way, with its own-brand offerings – under the Advent label – always very keenly priced. In the case of its printers, the A10 entry-level model comes in at just under £50. So how does this compare with other entry-level all-in-ones?


The A10 has a solid and workmanlike appearance, with a slight curve to its front edge and a red keyline on the top cover of its scanner. The large, rear paper tray folds up from on top of the machine and keeps the mechanism simple, without the need for a telescopic support. The 1,200dpi flatbed scanner is a simple, single-sheet device and to the right of this is an equally straightforward control panel. 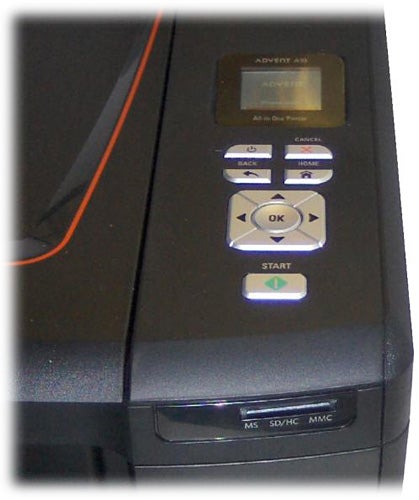 There are 10 buttons in total, with a large square of menu navigation arrows and a single Start button among them. A small, but useful, 38mm colour LCD is set into the top panel and can be viewed from a surprisingly wide angle, both horizontally and vertically. Set into the front edge of the machine is a single memory card slot, which can take SD and Memory Stick cards, but no xD, without an adapter.


The front panel folds down to become the output tray and this one does have a two-stage telescopic support, which pulls out and increases the printer’s overall footprint quite substantially. 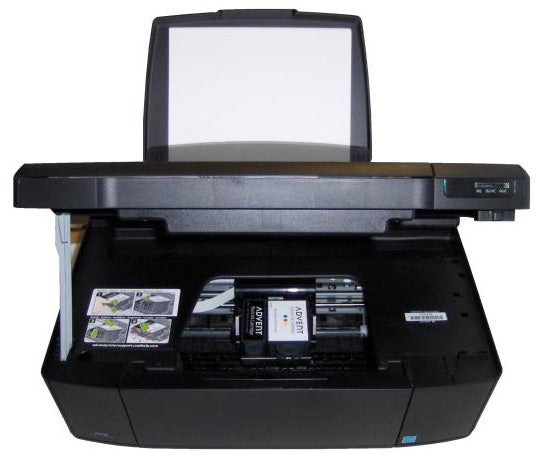 Lift the scanner section of the machine and a spring-loaded support flips out to hold it in place, so you can install or replace the twin ink cartridges, one black and the other tri-colour. The use of a tri-colour cartridge, without a photo black or clear overcoat is the main difference between the Advent machines and their Kodak cousins.


The only data connection is a USB socket at the back and power is delivered through an in-line black brick in the mains cable.


Clipping the printhead and cartridges into place is the work of moments, and installing the software is equally uncomplicated, although it can involve downloading lengthy updates. The software provided is the same as for the other two printers in the range and covers all printing, scanning and photo uploading essentials.

The print engine is also common to all three models, so you can view the A10 as something of a bargain, in comparison with the Advent AWP10. This machine is specced at speeds of 6ppm in black and 4ppm in colour and these figures must be for normal print mode, as our draft mode results gave a top black speed of 8.6ppm. In normal mode this came down to 5.2ppm, still very worthwhile, and the colour speed showed a maximum of 3.3ppm.


A single-page colour copy took a very reasonable 34 seconds; a 15 x 10cm photo on A4 photo paper came through in a quick 54 seconds; but a 15 x 10cm photo printed from an SD card directly onto the same size print completed in just 41 seconds – very good for this price of machine. 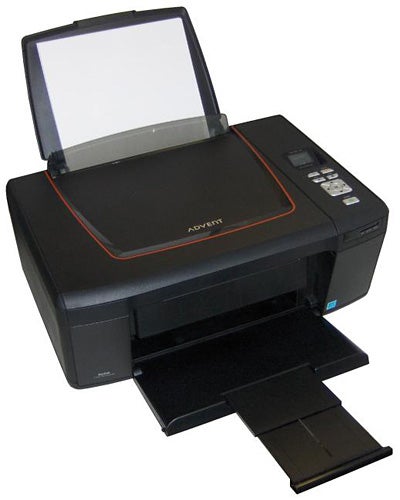 The print quality is better than reasonable, with good black text, marred only slightly by an occasional fuzziness, where the ink has flowed into the paper fibres. Block colours for business graphics are dense and show few signs of dither patterns or striping. A colour photocopy came out a lot lighter than the original, though it was still very usable.


Photo print is surprisingly good, though some micro-banding is noticeable in solid areas of sky. Colours are natural and not far off those produced by Kodak’s own five-ink system.


PC World is now quoting slightly lower prices for Advent black and colour cartridges than when we tested the AWP10. We’d like to think this is in response to our pointing out how expensive they were, but we have to disappoint the company and say they’re still much too high. The cost per black text page is 6.2p and for colour its 14.1p, both including 0.7p for paper. Compare the costs with those from the £48 Canon PIXMA MP280, which gave 4.3p and 8.9p, or the £51 Epson Stylus SX425W, which returned an even better 2.7p and 7.7p, around half the cost of printing with the Advent A10.


If you look at its feature set, the Advent A10 is an excellent machine for the money. Several printers at this price don’t have a colour LCD or a memory card slot (though the Epson has both) and print quality and speed are reasonable. However, it’s the cost of running the printer that separates it from its main competition and, unless PC World can pull it into line, the Advent range is going to continue to look unattractive.