It could be said that you can divide the human race into two groups: those who love Advance Wars, and those who have yet to play it. Intelligent Systems’ 2002 original was the first strategy game to really work on a handheld format, and it and its sequel were among the strongest games on the old Game Boy Advance. On the surface, Advance Wars looks like a simplistic turn-based strategy game, where you play a commanding officer who controls air, ground and naval units moving and fighting on a square grid, with the results of combat displayed as eye-catching, animated sequences. This isn’t entirely inaccurate, but it misses out on what makes the game work: quirky charm, a fast pace, streamlined unit manufacturer and resource management, a solid set of units and an intricate balance between the various unit types. Advance Wars is one of the most accessible military strategy games you could ever hope to play, yet it’s also surprisingly deep. 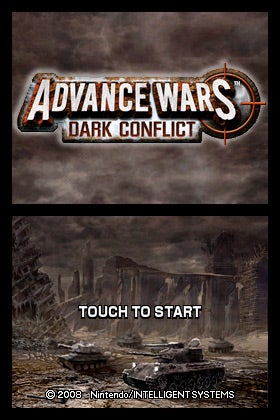 2005’s Dual Strike bought the series to the DS, with touch-screen control and a range of enhancements. Despite a few grumbles about new additions like the CO Powers which could be harnessed by the various commanders and the tagging system, most people in the first group thought this was a good thing. Intelligent Systems, however, seems to have been worried by what was putting off the second group. Judging by Dark Conflict, the answer they have come back with seems to be the overall tone.


You see, Advance Wars has always been the brightest, breeziest, most ludicrous slice of strategy in town. Wars are fought by pugnacious teen heroes and stroppy, drama-queen villains, all so caught up in their own weird story arcs that they seemed oblivious to the lives that hung on their every decision. The whole presentation is deliberately cartoon-like, and the plots are – frankly – baffling. In real life, War might be hell, but in Advance Wars it’s all just good clean fun. For the fans, this was a big part of the appeal, but Dark Conflict makes you think that Intelligent Systems felt it was time that the series grew up. To get the second group, all that lovable silliness had to go clean out of the window. 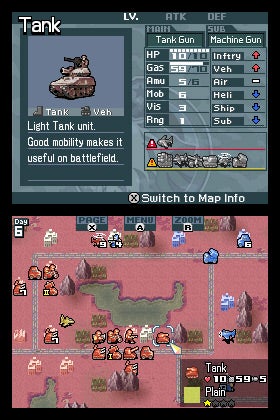 With Dark Conflict, it has. The graphics have taken a more adult anime direction. The palette has taken a distinct shift towards dark reds, greys and browns. The characters and narrative are more what you might expect from your average Japanese RPG. Youthful hero with odd attire and extravagant hair-do? Check. Maxim-spouting mentor figure? Check. Mysterious heroine with enigmatic past? Why, of course! The villains are a little more inclined to the old-style of oddball melodrama, particularly the resident mad scientist, Stolos, and his offspring, but a lot of the old craziness has been replaced by solemn hand-wringing. The plot is all post-apocalyptic ruin, man’s inhumanity to man and weird floral viruses. War is terrible, the game never refrains from telling you, even if the turn based simulation of it can be quite amusing. 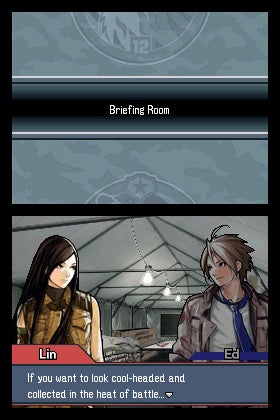 This change of direction is guaranteed to upset some long-term fans. To be honest, even I could have done with a few less drawn-out cut-scenes in which the various commanders discuss what a genuinely nasty business this whole war thing was and how difficult yet important it is to maintain faith during even the darkest times. That said, don’t let it be a deal breaker. This is the most thoroughly playable and addictive Advance Wars I’ve come across yet. 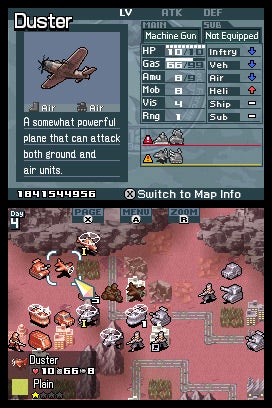 If anything, this comes as a result of simplification. Last time around, Intelligent Systems got a bit carried away with the new capabilities of the DS and added features like there was no tomorrow. We got CO Powers, then combined CO powers when you used different COs in a tag team, not to mention the whole ‘dual front’ concept, where two battles raged simultaneously across the two screens. Dark Conflict wisely strips a lot of this back, doing away with tag teams and secondary fronts and reducing the impact of CO powers for much of the single-player campaign. The result – particularly for newcomers – is a less complex, more immediate game where you can concentrate on the business of recon, attacking and defending, and working out the strengths and weaknesses of the various units. 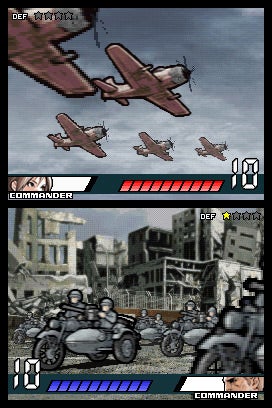 What new features there are, meanwhile, do wonders for the core gameplay. A new unit experience system – while not persistent between missions – makes you more protective of your units and less inclined to treat them like cannon-fodder. Temporary ports and airports, deployable from a mobile workshop unit, make it easier to refit and repair air and naval units when the relevant bases are on the other side of the map. The new units, too, have been cleverly designed. A high-speed motorcycle unit can be deployed to do the old infantry job of capturing cities (the game’s cash-generating facility), factories and airports, which helps you spread across the map a little more rapidly. We also get an anti-tank unit that can do a similar job to the mech-gun in terms of blasting tanks, but – thanks to an automatic counter-attack – isn’t such a sitting duck when confronted directly. These, along with other units introduced later on, add new tactical opportunities (and challenges) while pepping up the already rapid pace of the action.

The result, in the single-player campaign, is a game that draws you in, ramps up at just about the right level of difficulty, and continually keeps you saying ‘just one more level, then I’ll stop.’ This isn’t so bad at chapter five, when a map can be conquered in around ten to 15 minutes, but by the time you’re at chapter ten and the levels are taking half an hour or more Dark Conflict can be a dangerous way to burn through your valuable free time. It seems crazy that something with such basic presentation can be so enthralling, but watching an enemy missile-launcher or mega-tank destroyed by a precisely timed bomber raid is a real ‘fists in the air’ moment. You’ll cringe as your precious interceptor squadron is destroyed through your own incompetence or lack of observation. You’ll breath long sighs of relief as an embattled infantry unit lives to fight another day. The Advance Wars style might have gone, but the feeling that you used to get from playing it – thank heavens – remains. 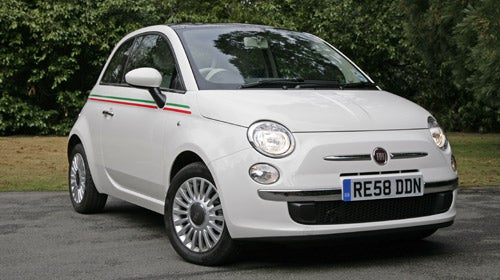 And even those who hate the new look Advance Wars will find something of value in this package; online multiplayer. You can battle a friend or an anonymous opponent, with an option for the game to find someone of the same skill level as yourself. From the drubbing I took this morning, it appears to be seamless and lag-free, and there’s voice chat, for those who like it, plus a facility to design and upload your own maps for other players to use. Local Wi-Fi multiplayer features remain, boosting the player count to four (sadly with four DS handhelds and four cartridges only). 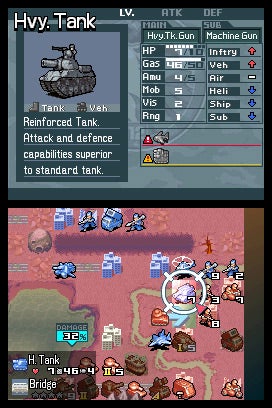 In the end, the new darker look and story isn’t going to be the thing that drags everyone into the first of our new groups. It’s the sort of revamp that only the sort of miserable teen hardcore gamers who moan about anything cute or colourful will go for – and who wants to listen to them? What will, however, keep anyone who tries Dark Conflict playing is that it contains an incredibly tight and well-polished version of one of the finest strategy games around. If you have a DS, try it, because you really don’t want to spend the rest of your life in that miserable second group.


Not everyone will like the new direction, but beneath the change of style Dark Conflict is a superb iteration of Advance Wars, and the new online features will keep it locked in your DS for months.