Adobe has made a considerable success of repackaging its flagship brands for lower-end consumer usage. Each year, new versions of Premiere and Photoshop Elements are released, chipping away at the difficult task of combining ease of use for the beginner with power for the more experienced user. So now we reach version 8 of both applications (since Premiere Elements skipped a few to reach version 7 at the last iteration), and there is even greater emphasis on the new user.


The first new feature of Premiere Elements 8 appears at the initial splash screen. Instead of just being able to start a new project or open an existing one, there’s an Organize option as well. This leads to the asset management tool which was already part of Photoshop Elements. Now it is taking the first steps towards providing similar facilities for Premiere Elements.


However, the main functions are still geared towards still images. You can perform basic photo retouching and put together simple montages. Although you can import video and perform a limited range of actions upon it, these are few and far between compared to the options for photos. The functions are divided into four categories with a tab for each – Organize, Fix, Create and Share. 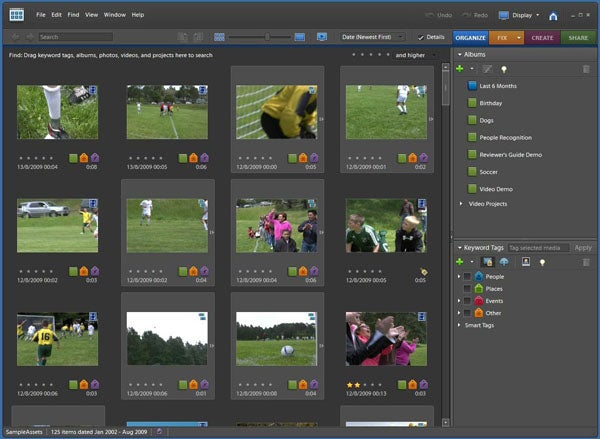 but the video options essentially just load the main app.”’(/centre)


The first of these is the most fully featured for video content. You can tag your clips and group them into catalogues, using keywords. However, the most significant feature here is the Auto-Analyzer. This processes your clips and attempts to allot tags automatically. These are fairly general, and refer to the potential quality of the clips, including whether there is camera shake and how loud the audio track is. Most surprisingly, the Auto-Analyzer will attempt to figure out what kind of shot each clip is – long, medium or close up. In general, the tagging results are not that relevant when editing the clips yourself, but they are used by other Premiere Elements 8 functions we will be explaining shortly.


The remaining Organizer tabs offer less for video. Fix provides facilities for correcting colour, levels, red eye and other possible problem areas, but only with still images. Similarly, Auto Smart Fix only works with photos. The Create tab is also aimed solely at still images, to make various combinations such as collages, calendars and greetings cards. There are some video-related options under the Share tab, but these merely load your clips into Premiere Elements. The options include sending your footage to a mobile device or the Internet, both of which would have been useful as standalone functions.


As it is, whilst the Organizer shows potential, it doesn’t yet add enough for video to be a truly essential addition. Fortunately, there are some significant new features within Premiere Elements itself, which make use of the information gleaned by the Auto-Analyzer. Adding a clip to the timeline prompts you whether you want to apply SmartFix. This uses the Auto-Analyzer tags to figure out whether colours need correction or levels need to be adjusted, and will also smooth out shaky video.


Smart Trim also uses the Auto-Analyzer information to suggest which areas of a clip are usable. These are then fed into the Smart Trim tool, where you can use the suggestions to adjust in and out points for the clip. However, you can also pull out more than just the middle portion. In automatic mode, Premiere Elements will extract the sections it thinks are usable and place a fade between each to join them back together. This is potentially the most useful aspect of Smart Trim, as in manual mode it almost feels more complicated than simply choosing the in and out points yourself. 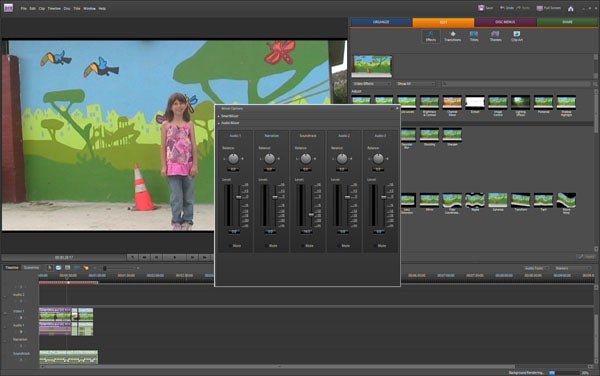 (centre)”’The Smart Trim tool attempts to cut out the dross


More clearly useful is SmartMix. This will automatically reduce the volume of your background audio in favour of your foreground sound, which is particularly handy if you have dialogue over musical accompaniment. You can set which audio tracks are the foreground and which are the background in the Options. The results are very convincing, too, with an adequate period of delay before the background audio is raised or lowered so it doesn’t ‘pump’ up and down.


Rounding off the features designed to entice beginners, InstantMovie now includes a few new Themes. These are Art in Motion, Baby, Dreamscape, Outdoor Adventure and Retro. InstantMovie uses the tagging from the Auto-Analyzer to edit your movies for you according to the chosen theme, adding titles and music. It’s a quick way to make something of your footage, although it won’t tell the story you want. 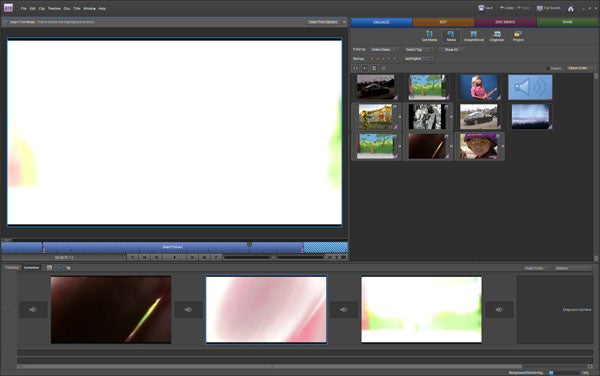 and synchronise the movement of static or animated graphics.”’(/centre)


Not everything in Premiere Elements is for those new to video editing, however. An extraordinarily powerful addition is the Motion Tracking tool, which can follow the motion of objects onscreen and trace this with a graphic or animation. This is the kind of feature normally associated with high-end video compositing applications such as Adobe After Effects. The Premiere Elements version is naturally less powerful. The tool will initially track the most obvious moving object in the scene automatically, but you can also specify other objects to track. The final additions of note in Premiere Elements 8 are a selection of new effects, including Duochrome, Dreamglow and Film Look, plus a large library of clip art.


The new version of Photoshop Elements launches with a similar splash screen to Premiere Elements. However, the Organizer has been part of the photo editing app for a few versions. The video-related enhancements have been carried over to Photoshop Elements 8. However, these video options are only available if you have Premiere Elements 8 installed. If you don’t, you will be prompted to install it, or a trial version. Otherwise, you won’t be able to use these functions. 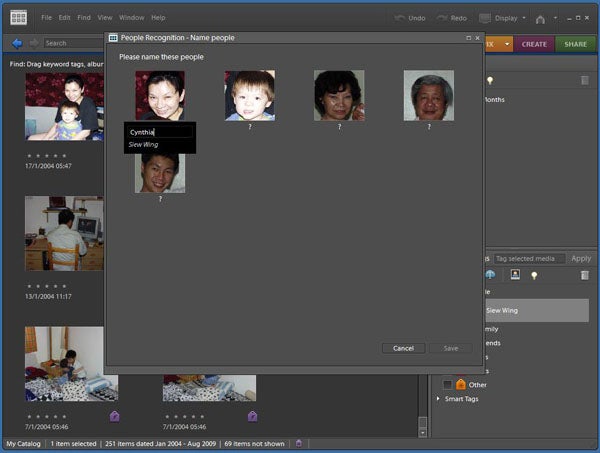 (centre)”’The face recognition system has been improved, but tagging your photos still involves a fair amount of user input.”’(/centre)


The Auto-Analyzer available in Premiere Elements also extends to Photoshop Elements, providing similar tagging information about overall quality, with similar drawbacks. The facial recognition system has also been extended and strengthened. The new People Recognizer includes more powerful algorithms, which can be trained to provide greater accuracy. Sadly, this requires a fair amount of user input to ensure the correct names are associated with particular faces. The software does begin to suggest possibilities as more recognition data has been accumulated, but it frequently misses faces that are not turned straight towards the camera, and will sometimes pick up objects that aren’t faces at all. Fortunately, there’s a new tag entry field which drops down a list of existing tags, and makes it easier to add more.


The Organizer will now let you access a selection of adjustments when in Full Screen mode. These include the Quick Edit and Quick Organize menus. The options available are still relatively limited, though, involving automatic image adjustments. So the Organizer is even better for quick fixes than with previous versions. But it’s still no match for the main Editor application, which packs some of the most powerful tools of any image editing app at this price. 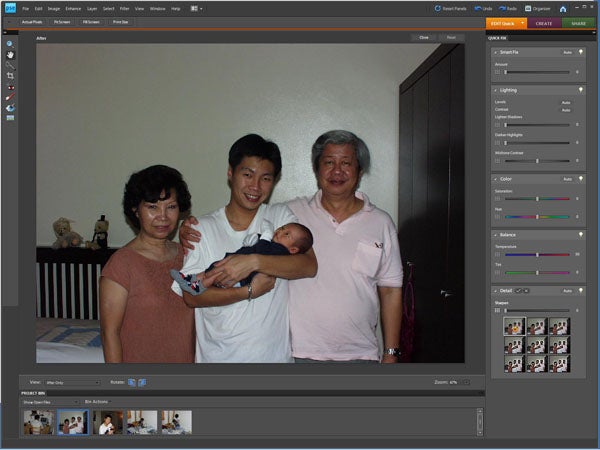 (centre)”’The preview mode lets you click through a grid of possibilities so you can find the one you like more easily.”’(/centre)


Some of this power has been rendered easier to access via the Quick Fix Previews. Instead of adjusting the sliders until you see a result you like, the Previews present a grid of nine different options you can simply click on to see more clearly in the main screen. This way, you can rapidly find the look you want without really knowing how to use the effect’s parameters.


There are a couple of new additions which further accentuate this power for the more seasoned image editor. The Photo Merge Exposure mode automatically combines multiple bracketed shots into a single image showing the best of them all put together. Like Premiere Elements’ Motion tracking tool, this is a high-end feature which has been borrowed from Photoshop CS4. 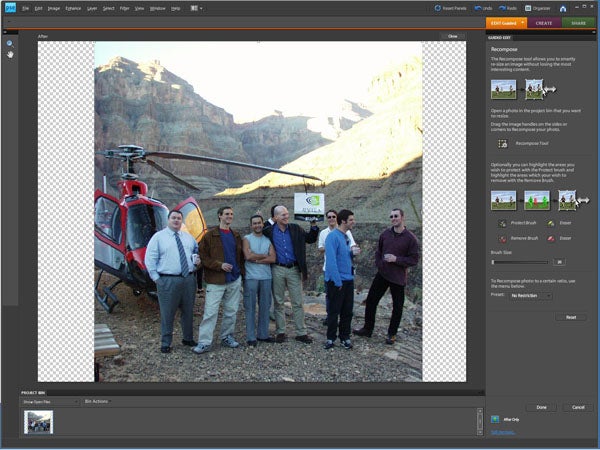 (centre)”’The Recompose tool protects the elements you choose whilst you resize a photo.”’(/centre)


Another tool from Elements’ big brother is Recompose. This is available in Guided Edit mode, and is useful if you want to resize a photo whilst keeping all the main elements onscreen, but without noticeably changing their dimensions. Normally, if you wanted to resize a photo you would have to either crop it or make do with skewed proportions in one direction. The Recompose tool lets you protect areas, which are then kept as they are when you drag the edges of the photos.


These are the main new features in Photoshop Elements 8, but as always Adobe sweetens the deal still further with extra artwork, templates, and layouts. So there are even more assets to use in your own creations. 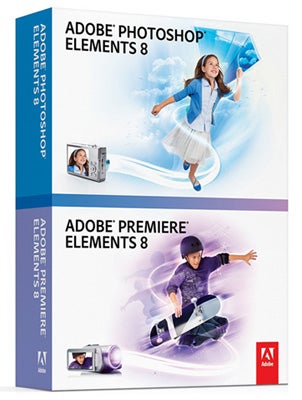 
The final feature of note with the Elements 8 bundle is that both apps are now fully Windows 7 compatible. However, neither feels like a major leap forward from the previous version. Fortunately, there are still no other sub-£100 video editing or photo retouching apps with the power of either Premiere or Photoshop Elements, so they remain the best option in either category. Newcomers will be even more pleased with both, but current users won’t necessarily find enough here to upgrade, unless one of the main headline new tools appeals.