What is Adobe Photoshop Elements 12?

Photoshop Elements 12 is Adobe’s latest incarnation of its consumer-grade photo editing software. This new version doesn’t bring any huge changes, but it does include a selection of enhancements and new features both for existing users and newcomers alike. But will these be enough to lead the old hands to upgrade, or convince the rest that this is the time to try Photoshop Elements? 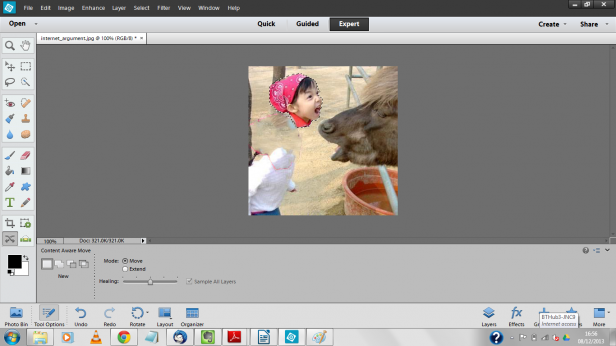 A newcomber in the toolbox is Content Aware Move, which has been part of the main Photoshop for a while. This lets you select an element in the picture and then simply move it to a new location. The software will analyse the surroundings and fill in the hole as best it can. The tool is only available in Expert mode, and there are a few options to configure how the selection functions, including whether it adds, subtracts or intersects. You can also use the tool to extend instead of moving, which essentially copies the selection.

The tool is intended for activities like moving people around family portraits, but can be used for other creative activities. It also attempts to blend the moved selection to fit the background it now has. However, we had mixed results with the Content Aware Move tool, depending considerably on how well we had executed the selection, and the complexity of the background. Generally, we found a bit of extra retouching was necessary to get a really good effect, although the tool does speed up the process considerably. 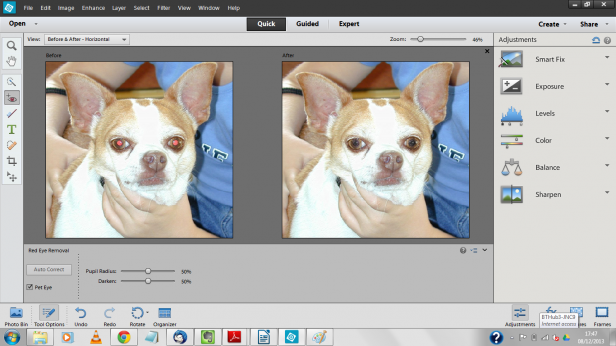 Another new tool is aimed at animals lovers. This is an enhancement of the Red Eye reduction facility that has existed for many versions to include pets. The difference here is that the tool can now cope with the different colouration of animal eyes, and the various flash reflections this causes. A checkbox in the Red Eye tool enables the mode. We found it effective with
the sample pet images we tried. 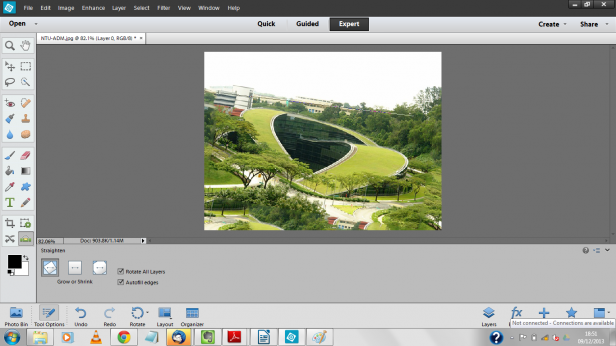 Another new correction facility is the Content Aware Fill for the Straighten tool, which is again available in Expert Mode. This is for those times when you have shot something at slightly the wrong angle, and need to straighten the picture out, for example to make the horizon horizontal. If you select Autofill Edges, any empty spaces that appear will be automatically filled in with content derived from the nearby image edges. The results are reasonably effective, so long as the straightening angle isn’t too acute, and the edge content is generic. Otherwise, some odd repetitions occur, although they are still blended well with the original image. 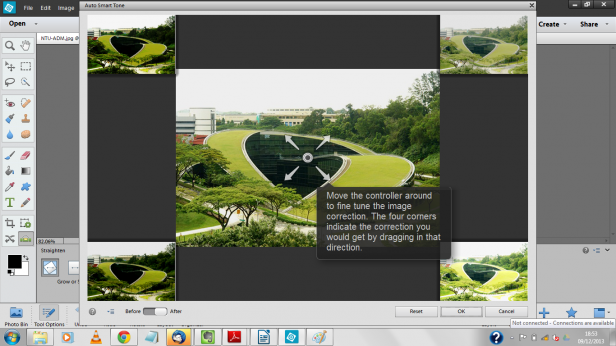 The new Auto Smart Tone is almost exactly the same as the tool in Premiere Elements 12. It provides four tonal adjustment options for you to choose from, in the four corners of the image, with a control joystick in the middle that can be shifted between the four corners to blend them. You can achieve the same effect with a mixture of existing enhancement filters, but this is a more intuitive way for those who prefer to work visually. It will also allegedly remember your settings and make suggestions in keeping with this next time you use the tool.