While everything looks good on paper, the first of many hurdles with the Adidas miCoach Smart Run comes when setting it up. It’s a lengthy process that requires you to sign in to or create a miCoach account, and the watch’s interface proves sluggish and far from intuitive from the off.

Fortunately things do pick up, although only briefly. The 1.45-inch square screen is big by sports watch standards and information is well laid out during a run, ensuring it is easy to read when you glance down to your wrist. On top of this, as well as functioning well, heart rate metrics are colour coded to give you a better indication of what the figure means. 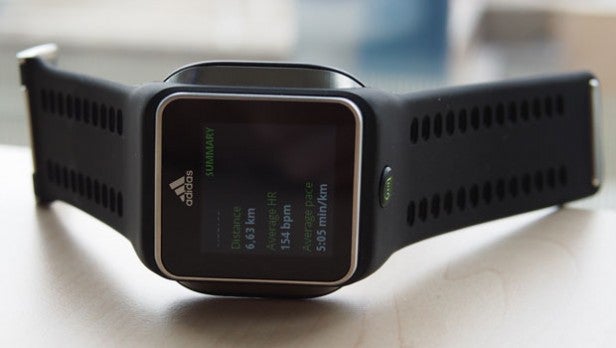 Performance data is on point, too. Having picked out a known 5K route, the miCoach watch offered up accurate distance and time results alongside details about how calories burned. Used alongside the a FitBit and the Nike Plus running software built into the iPod Nano, the Adidas miCoach Smart Run is the most natural and accurate running addition.

This is where things start to go downhill, however. Tracking GPS is a tiresome process that requires you to stand waiting for a satellite lock before your run. On more than one occasion we wasted more than five minutes refreshing the GPS search before we could hit the road.

Although the Smart Run is capable of displaying top line performance data direct on the watch face, syncing the device to your miCoach account sees a mass of additional graphics, maps and statistics made available through the desktop platform. This enables more enthusiastic runners to better pull apart their performances. 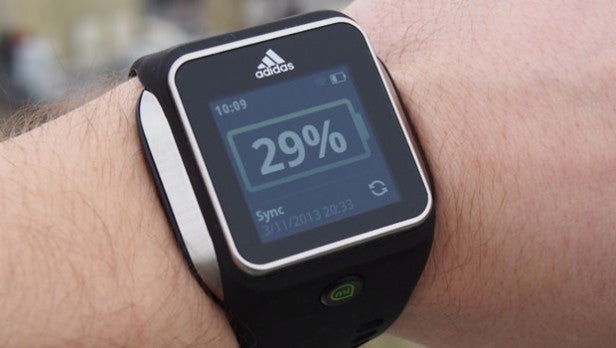 We could just about tolerate slow GPS locking were it not for the fact the Smart Run’s battery life is dire. Adidas claims ’14-day, time only battery life’ but in truth the Smart Run struggles through a single day’s use, and that’s without using its more power-hungry features.

Turn GPS on for a run, play some music and use the heart rate monitor and the Smart Run’s is more or less spent within hours. In fact, the watch is so power-hungry we repeatedly found ourselves without any remaining battery halfway through a run, which is just not good enough.

The need for daily charges makes the Smart Run too disruptive to your daily routine. What’s more, recharge times aren’t particularly speedy. Returning the 410mAh Lithium-Ion battery to a 100 per cent charge will take close to three hours.

The fact the Adidas miCoach Smart Run comes with a bespoke charging dock doesn’t help matters, as you can’t use a standard microUSB cable. 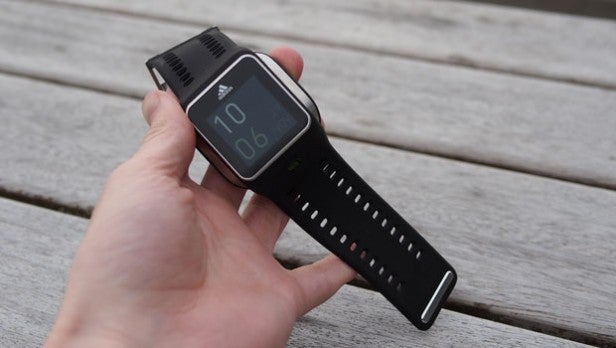 Should I buy the Adidas miCoach Smart Run?

Unless you have an uncontrollable hatred for chest strap heart rate monitors, then the Adidas miCoach Smart Run watch is probably best avoided. It offers a number of great features and a largely pleasing user experience, but the pitifully poor battery life is too much to tolerate for a product with a £350 price tag.

With the fitness gadget market currently in a boom period, there are many rival devices that will suit the needs of even the most hardened of runners, all with considerably less effect on your wallet. Although boasting fewer features, the Nike FuelBand SE will be satisfactory for most casual runners, as would the MisFit Shine or Fitbit Flex, all of which cost less than half the price of the miCoach Smart Run.

As a dedicated running watch with built-in GPS and better battery life, the TomTom Runner is the better option at present. It doesn’t have a heart rate monitor, but its GPS system is faster, it lasts longer and it’s £200 cheaper.

The the miCoach Smart Run is an admirable but ultimately flawed first effort from Adidas. The integrated heart rate monitor is a welcome step away from restrictive chest straps, but the horrific battery life and slow GPS lock undo much of the good work elsewhere.