What is the adidas miCoach Smart Ball?

The adidas miCoach Smart Ball is the future. It’s a FIFA approved football that tells you not only how hard you’ve struck it, or how much spin you’ve applied, but the exact impact zones and flight trajectories of the ball.

This ability, combined with a smartphone training app, is meant to help improve your dead ball kicks. The luxury will set you back a hefty £249.95, around £150 more than the official World Cup ball, but the technology and the application of it is potentially revelatory.

Can this technological advancement really help you progress as a footballer? We laced up our boots to find out.

The miCoach Smart Ball uses a sensor package suspended within the heart of the ball to help you improve three kicking factors: power, bend and ‘no spin’ – think Ronaldo free-kicks, or Knuckleballs if you’re baseball fan. In order to offer the most accurate readings, the ball’s sensor hosting brain is suspended at the very centre of the sphere. A set of 12 impact absorbing arms protect the electronics without affecting the natural flight of the ball.

It sounds damn impressive, though sadly not every kick can be recorded as there are a few rules you must follow for a shot to be registered. Those of you looking to improve your daisy cutters are going to be disappointed; kicks must be at least three feet off the ground and travel 10 yards or further in order to record. Bouncing and rolling kicks don’t count, either – the miCoach Smart Ball must be stationary when you kick it. 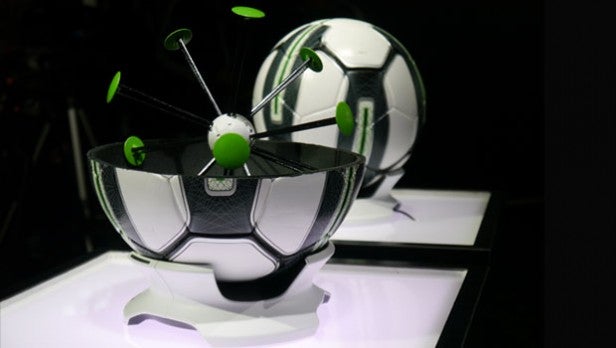 Syncing wirelessly with the accompanying app (currently iOS only) the ball can record and store just one kick at a time, which can be a bit restrictive. Fortunately, it syncs unprompted after each strike.

This isn’t just a gadget for lone use, either, a collection of challenges let you go head-to-head with friends in a power-range based penalty shootout, or in a bid to replicate shots by the professionals. 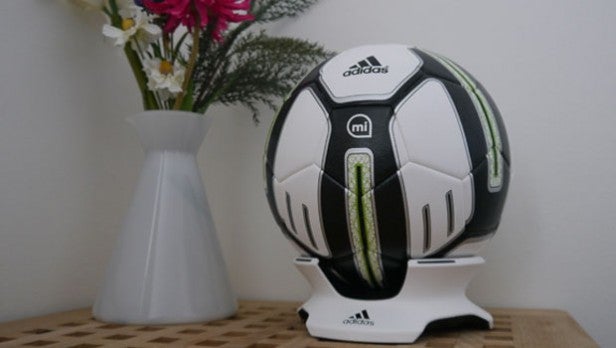 Adding electronics to a football solves some issues but quickly poses
others, namely the need to charge the ball – something we still find as
bizarre as having to charge our watch or car. Fortunately, adidas has
taken care of this with a bundled wireless charging dock.

The matt white finish looks good and the dock features a wireless charging plate in its base. Drop the ball on this cradle – matching the base connector with the pad, guided by green indicating lights – and within an hour you have 2,000 kicks worth of charge.

Thanks to the ball’s low energy Bluetooth 4.0 connection, we’ve managed almost a week’s use on a single charge. 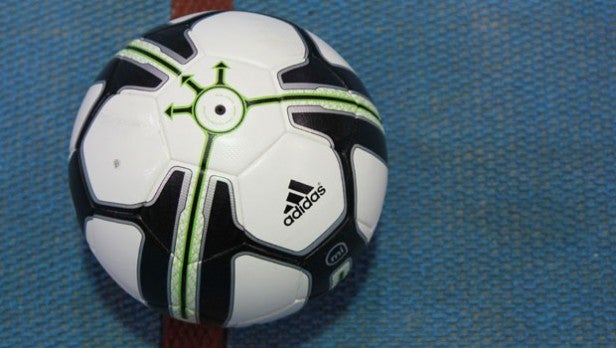 Tech filled goodness aside, the miCoach Smart Ball is a high quality ball in its own right. It is comparable in build and materials to the competition balls used in both the Premier League and World Cup – it’s a standard size-5 ball and meets regulation weight and bounce criteria, ensuring the experience perfectly replicates that of a standard ball.

Even its graphics have been designed to help improve your kicking technique and ball striking. A selection of black and green lines help you line up shots and contact points while the ball is stationary – with the app highlighting exactly where to strike to get the desired result. During flight, these lines then help follow the spin applied to the ball. A ‘compass’ has also been applied to the ball’s top, again in a bid to better indicate how to line up your strikes. 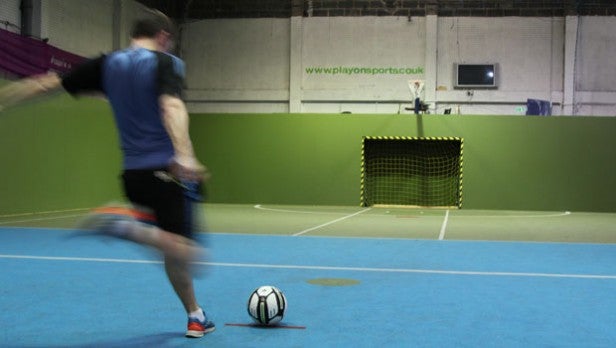 Of course, given the ball costs a hefty £250, durability has to be a concern. Having spent the better part of a week hoofing the ball around a field, astro court and concrete football pitch it is showing a couple of very minor scuffs, but nothing to be concerned about. That won’t stop you from worrying whenever it lands in a hedge (or similar), though, so it’s clearly the ball you use to train specific skills, rather than a general kick about.

The free to download app is what
really brings the Smart Ball to life.

adidas has a history of developing strong
smartphone apps – just look at its miCoach running or tennis offerings –
and the miCoach Smart Ball app is no different. It
is easy to navigate and turns what could be quite complicated data into pleasing and easy to digest visuals, graphs and figures. 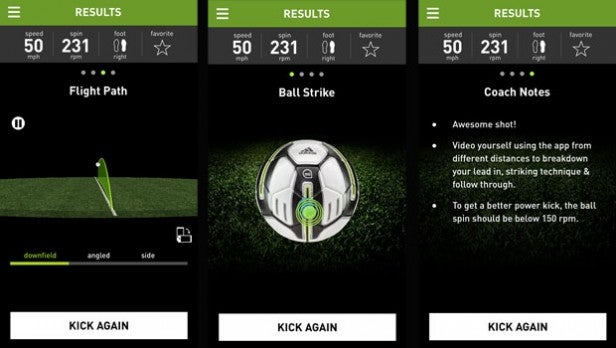 Syncing
after every kick – you have to first tell the app a new kick is coming –
the app offers a range of screens for every strike.

With power,
spin and a visual flight trajectory offered, there is now no guesswork
involved in how you struck the ball, and how this needs to be altered in
order to improve. Impact points are shown against the ideal and spin is
broken down into how it would relate to a match situation – be it an
around the wall or over the wall free-kick.

What really makes the
Smart Ball and app useful, though, is the array of tips and guidance
points that come from every strike. Dubbed ‘Coach Notes’, these pointers
are what turn the Smart Ball into a true training device.

In
order to catalogue your progress, you can ‘Favourite’ kicks, storing all
the shot’s data in your record books. Your top shot speed and curl RPMs
are also automatically registered in your own history graphs so you can see your progress. There are, of course, the now customary social sharing options, too.

For
those looking to go back to basics – or if you find your Smart Ball
without any power – the app has you covered on this front too. A ‘Ball
Mastery’ section within the app offers a number of video-based tutorials
for ground skills (step overs and the like) so you have something else to try.

We have suffered no unexpected or unexplained connection
outages after hours of use. However, for you Android users out there, we have bad news. At
present the miCoach Smart Ball app is only available for iOS devices. 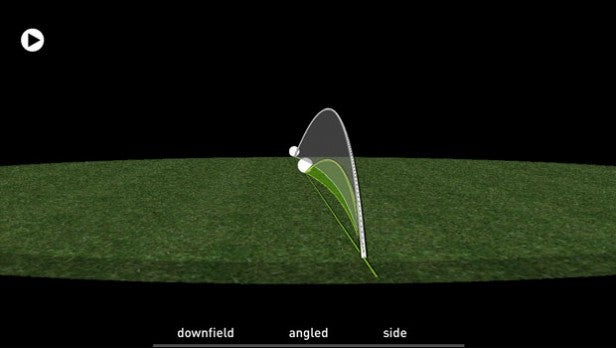 The
more I use the adidas miCoach Smart Ball, the more I grow to love it.
Yes, there are flaws, many in fact, but this is a gadget that has
changed our approach to the beautiful game forever.

As you would
hope, after a week’s use I did find my technique improving. As with
any training device, certain improvements are instantly noticeable –
correct placement of my plant foot or adjustments to our impact point. Further improvements, however, will only come with time and practice.
This is a serious training aid but not a miracle cure for a lack of
natural ability.

The ability to monitor visual indicators of your
shots provides a level of understanding on how to improve that is
simply not available by hitting hundreds of balls in a trial and error
method.

But it’s the feedback through the Coach Notes element of the app that really converts this expensive ball into a viable device. 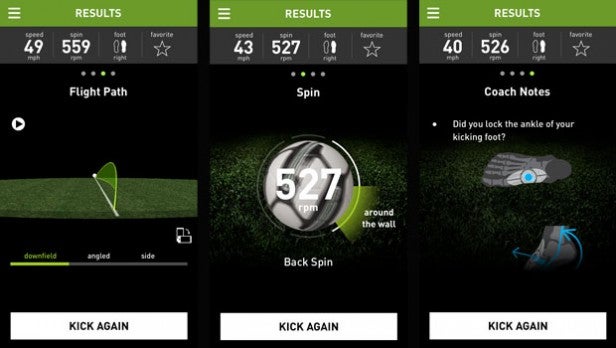 Mishit
a shot and the app is quick to offer guidance on how to better angle
your foot, move your impact point or adjust your follow-through to get
the desired results. From simple to advanced guidance, these notes are
enhanced by graphics and training videos to further help you learn and
progress.

Hit a perfect shot and you are congratulated, but still
pushed to improve. The app will try and get you to attempt shots with your
non-dominant foot in a bid to improve your overall game, too.

For
those using the ball as a group, the app’s inbuilt video feature is
another winner. The app
utilises your phone’s camera to record your shot and provide further useful feedback. Once the ball has been
hit, the footage is automatically cropped to two seconds either side of
the impact, where you can then jump through it frame-by-frame to closer analyse technique.

The
Challenge Modes brings an element of fun to the training ball. Whether
competing against yourself, a friend or the pre-loaded pro shots, these
mini games combine practice with competitive entertainment. 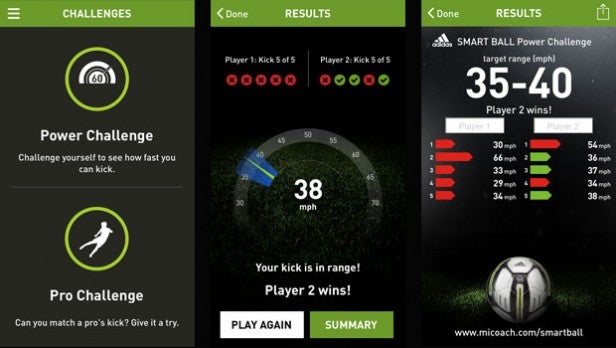 Although
integral to its use, one element of the Smart Ball we have struggled
with is holding our phone while kicking the ball. It feels alien to have it with you on the sports field and the need to activate the
ball before every kick is a nuisance. This is one case where we would be
happy to have a smartwatch.

Despite focusing on the fundamentals
of the game, the inability to record shots of a rolling ball is a major
drawback. adidas has revealed to TrustedReviews that
these features will be part of a firmware update that is already in the
works, so it might be worth holding out before splashing the cash.

With
the sportswear giant already offering performance monitoring miCoach
chips for select football boots, the miCoach ball feels like the first
step into complete tracking of your game. Ultimately, the miCoach ball is
a strong starting point that has a lot of room for growth and
improvement. 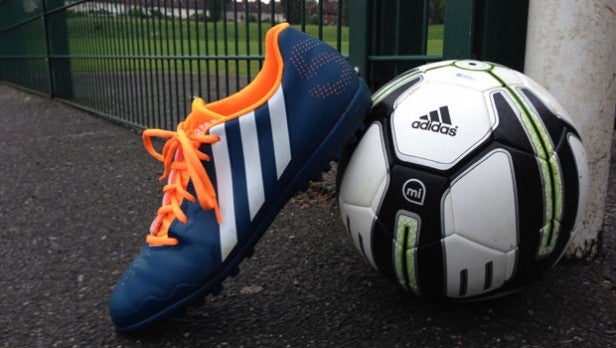 Should I buy the adidas miCoach Smart Ball?

If
you’re after something for the occasional kickabout, put your wallet
back in your pocket and step away: the miCoach Smart Ball is not for
you. This is a serious training tool with
major potential for keen footballers, young and old, and that’s reflected in a £250 asking price that’s £150 more than the official World Cup football costs.

But if you’re serious enough to find it useful and can stomach the hefty cost, the miCoach Smart Ball is a strong investment and an
undoubted way to improve your deadball striking. The app is elegant, clever and provides you with plenty of feedback to get you improving your skills, and it’s a high-quality ball.

Indeed, besides the price, the biggest problem is you’ll spend a lot of time fetching the ball if practising on your own. Put the time in though, and it will pay you back.

The
adidas miCoach Smart Ball has its flaws, but the principles and execution of them are brilliant. With ‘rolling ball’
support in the works and more to follow, there is a long way for the
Smart Ball to expand, but that just makes it more exciting.