The small business NAS appliance market has seen incredible growth over the past year with a huge range of products to choose from. However, in the midst of all this activity one product family has been there right from the start and Adaptec has now decided to give the entry-level products in its Snap Server range a serious revamp.


Earlier this year it launched the Series 500 appliances which target businesses looking for a high capacity rack-mount solution and now the distinctly elderly and excessively chunky 1100 finally gets its marching orders. The 1100 has been the entry-point of the Snap Servers for far too many years now and its basic feature set is not enough to give it an edge in this market anymore. In this exclusive review we take a look at the new Snap Server 110 which comes in as its direct replacement.


The 1100 has had to put up with the very basic SnapOS Linux kernel which delivers a comparatively basic feature set and a hardware specification that is well beyond its sell-by date. The new 110 is endowed with the full version of Adaptec’s GuardianOS which delivers a far greater number of features and optional add-ons making it a serious contender for business use. Hardware also sees major improvements with the 110 sporting a 1GHz Via C7 processor, 256MB of memory and Gigabit Ethernet whilst the IDE interface of its predecessor is replaced with SATA. The appliance only supports a single drive but is offered in three different capacities up to 500GB. The 110 does also have four USB 2.0 ports but at present these can only be used for attaching an intelligent UPS. 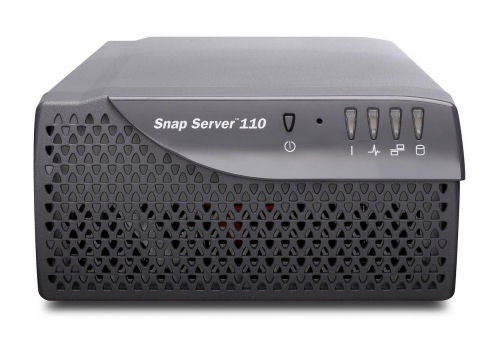 Installation can take one of two paths and the 110 defaults to receiving an IP address automatically where you simply point a web browser at its default URL which is documented in the quick start guide. If not then you use the bundled Snap Server Manager (SSM) utility which, incidentally, is available for Solaris, Linux and Macintosh systems as well as Windows. SSM searches the network and displays all Snap Servers ready for selection and allows you to update their firmware, license extra features or just jump to the web management interface.


On first contact with the management home page it’s clear that Adaptec’s GuardianOS delivers a wealth of features. It supports the CIFS/SMB, AFP and NFS protocols and so will work with Windows, Linux, Unix and Macintosh clients but also functions as an FTP server. Business use is clearly on the agenda as it can join with NIS (network information system) servers and read the NIS domain user and group lists. The first optional feature come up here as the 110 also supports iSCSI (Internet SCSI) which costs around £108 to activate. Creating targets is a simple job as you select a volume, enter a capacity for the target and activate CHAP authentication for improved security.

The 110 provides tough security as it supports NT and Active Directory domains and you can also designate share access based on local users and group memberships. Storage usage can be controlled with quotas which can be applied at the directory level and for individual users as well. Group quotas are only supported for NIS domains. In keeping with most NAS appliances, the 110 supports snapshots which create a point-in-time copy of selected volumes and these can be run regularly to a schedule. GuardianOS does also support software managed RAID but with only one drive available this is a redundant feature. 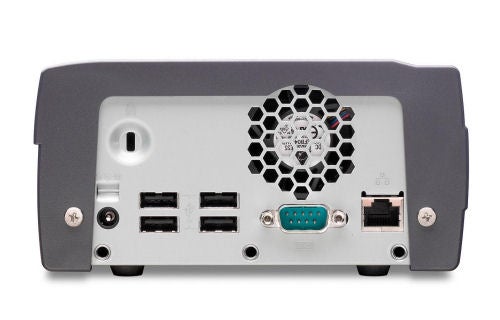 One role Adaptec sees the 110 filling is as a branch office storage server which links to other remote Snap Servers for share synchronization. To achieve this you’ll need the optional Snap EDR (enterprise data replicator) tools and prices start at £218. This provides an extra management interface which allows you to replicate selected files and folders from one source and target, distribute files to multiple appliances from one source and aggregate files from multiple appliances to a location on one appliance. All systems running the EDR client are displayed in the console as source and targets making it simple enough to create scheduled replication tasks. You can also bring Windows and Linux servers into the mix as Adaptec offers agents for these platforms as well.


Another option is the BakBone NetVault Workgroup Edition backup software which adds an extra £650 to the bill so we can’t many takers as it costs more than the 500GB appliance. For a mere £23 you can activate the optional virus scanning which comes courtesy of Computer Associates eTrust although note that this does not provide real-time scanning and can only be used to run on-demand scans. Selecting this feature loads a separate eTrust interface from where you can set up regular signature downloads and schedule scans on selected directories


The Snap Server 110 represents a sorely needed update to the elderly 1100 and integrating the GuardianOS kernel delivers a huge range of storage related features. As a home or small office appliance it’s a shade over specified but for larger businesses and remote offices it has a lot going for it.

The appliance’s home page gives a clear idea of the number of features on offer.