While I remember walking to school every day, the truth is for many teenagers actually putting one foot in front of the other to get somewhere is an archaic practice best forgotten.

Despite reports of hoverboards spontaneously combusting – which in my mind is an act of tech Darwinism – segways and, hoverboards are hot items top of most teenagers’ and young adults wishlist.

If you’re one of the new generation of non-walking bipeds the Blink will likely be an enticing bit of tech. Built by Acton, the firm previously responsible for RocketSkates, the vehicle aims to offer the motorised convenience of a hoverboard, in a classic 80’s skateboard frame.

From the top The Acton Blink looks like a relic from the 1980’s and features a classic ‘Penny Board’ design. It’s only when you flip the board over and see its rechargeable 1500W motor that you realise it’s a serious bit of technology.

At nearly 30 years old, I’m not exactly the Blink’s target market, but for younger folks closer to Acton’s recommended 16-plus years old age range I can see the design, being a big selling point.

The skateboard design has a retro-vibe that will undoubtedly appear to Shoreditch residents. It’s also a lot smaller than a regular hoverboard, measuring in at 26.5 inches long and is light enough to be carried, weighing in at 4.5kg. This means, unlike hoverboards, you can throw the Blink over your shoulder using a bundled strap and carry it when your journey’s over. 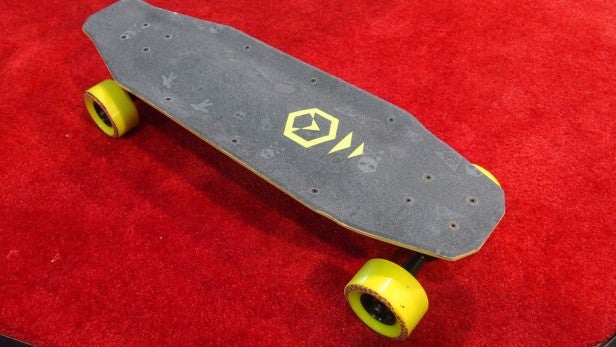 According to Acton the motor’s battery will last roughly 45 minutes when running at full speeds. This means you should be able to travel around 6.5 miles on a full charge – which will cover most people’s morning commutes.

The motor can be controlled using a bespoke remote control, or a smartphone with Acton’s app installed via Bluetooth.

Acton lists the Blink as having a 15 mph maximum speed, though a spokeswoman at the show told me the unit I was testing had been limited to 12 mph for safety reasons.

Which is probably a good thing, as I found the board has insanely fast acceleration. I tested the Blink using the proprietary control, which lets you get the unit to go forwards and backwards using a simple two way joystick. 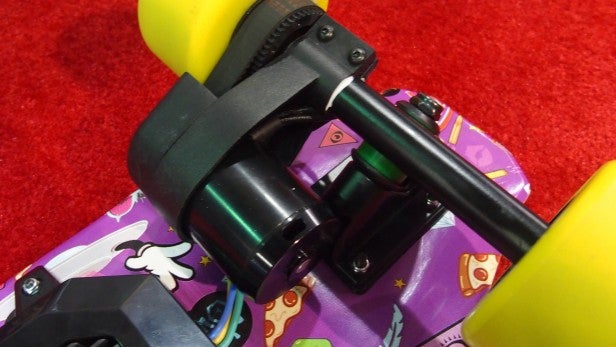 On the showroom floor the joystick went from zero to all out in the blink of an eye and I spent the majority of my first 10 minutes testing Blink on my arse, having fallen of the vehicle.

However, after a while I began to get used to the board’s torque and could ride it in a straight line without risking injury – though turns are still beyond me.

The smartphone app is meant to have more granular controls that let you tone down the Blinks speed and power – making it easier to ride. But I sadly didn’t get a chance to try these during my demo.

The Blink costs $500 and is set to launch in the US later this month. I’m not a fan of hoverboards.  But for young folks who don’t like the idea of walking, the Blink looks like a fairly fun option.

Featuring a travel friendly design, high max speeds and long battery life the Blink will undoubtedly be a hit with most teenagers and young adults. But be warned, you will spend the majority of your first hour with the board falling over while getting used to its rapid acceleration.