The AE1 Actives are an accomplished pair of speakers – and at their price, it's difficult to think of a competing package that could match their performance – whether in terms of more traditional, passive alternatives or fellow active speaker rivals such as KEF's LSX Wireless system

There was a time when active loudspeakers were the preserve of the professionals; found in recording studios, mastering suites and so on. Mind you, there was a time when Manchester United was a force to be reckoned with, so we shouldn’t be surprised to find the world moves on relentlessly.

Recently, powered loudspeakers with wired and/or wireless connectivity have become rather fashionable – see KEF’s splendid LS50 Wireless or, even more recently, Bowers & Wilkins’ Formation Duo as good examples. They provide a way, albeit expensive, to reduce a system to just a couple of boxes – although they require a source of audio, even if it’s just a smartphone.

Acoustic Energy has gone down a slightly more pragmatic route with the AE1 Actives, while at the same time playing to its long-established strengths. And the results are deeply impressive.

Anyone familiar with Acoustic Energy’s range of stand-mounting speakers won’t be surprised by what they find here. The very first Acoustic Energy speaker was 1987’s AE1, and while this current incarnation is a little smoother and less assertive in its looks, the lineage is plain. 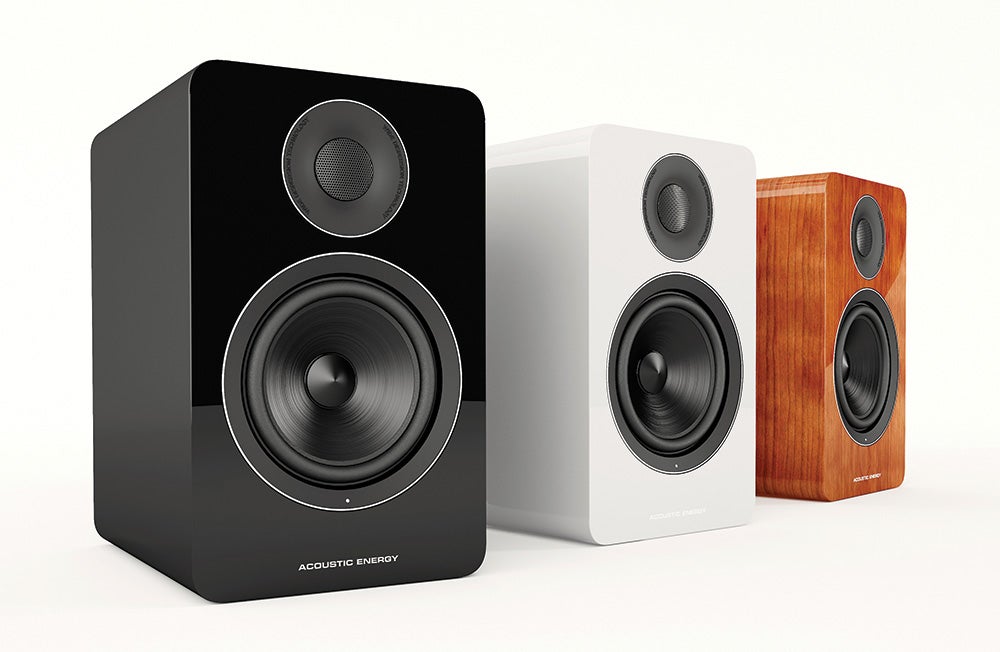 The AE1 Active follows a two-way design built around a heavily braced, 18mm-thick fibreboard cabinet with internal damping panels. Seamlessly constructed, with gentle and elegant curves across the top of the cabinet, they’re unobtrusive lookers. In addition, a choice of piano white, piano black or real cherry-wood veneers give them a chance to blend in with their surroundings.

In design terms at least, that’s about it. A tweeter above a mid/bass driver, with brand logo beneath, is par for the course. Acoustic Energy certainly isn’t interested in ripping up any speaker design rulebooks here.

Up-front, each AE1 Active comes packing a 27mm aluminium dome tweeter within a wide dispersion technology (WDT) waveguide, positioned above a 125mm ceramic aluminium mid/bass driver. Acoustic Energy’s “pure pistonic” cone technology has been finessed and refined for years, and here you see the current state of the art.

At the rear of the cabinet each speaker has inputs for a kettle-lead mains cable, a balanced XLR input and an unbalanced RCA socket. There’s also a slot port (the company has been evangelical about slot-port loading technology for a few years now), and three rotary controls. That’s one each for bass and treble adjustment (+/- 2dB) and a volume control. 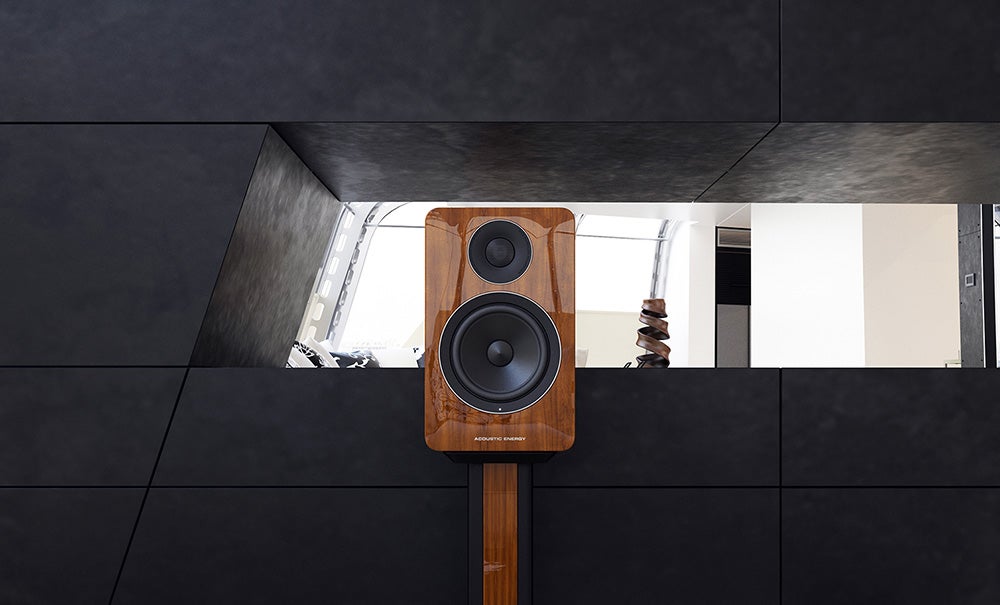 Inside, there’s 50 watts of Class A/B power for each speaker; the amplifiers are pair-matched. A total of 100 watts of power is respectable rather than startling, but Acoustic Energy is claiming a maximum sound pressure level of 115dB – which is startling if you’re on the receiving end of it.

What the AE1 Actives don’t feature is any kind of wireless connectivity. To keep costs down, to keep the cabinets of a manageable size and to preserve purity of purpose, the company’s offering a strictly analogue experience here. Of course, it’s easy enough to transform the Actives into a wireless system: simply use the RCA inputs to connect to a wireless streamer such as Arcam’s rPlay or Yamaha’s WXAD10 (or, if you want some voice-control too, Amazon’s Echo Link).

Acoustic Energy AE1 Active sound quality – An enthusiastic sound that exerts control, no matter what you throw at them

No matter the source(s) you end up using, it’s very difficult to move the AE1 Actives from from their broad sonic signature – and there’s really no reason you’d want to. It doesn’t matter if your musical preference is for full-scale classical or smoked-out reggae, nosebleed techno or K-pop, bedwetting indie or Satanic metal, the Actives are bang up for it.

What’s most immediately impressive is their even-handedness. Playing a vinyl copy of Buzzcocks’ “You Say You Don’t Love Me” (when the speakers’ volume controls come in particularly handy), there’s great balance to the melodic punk/pop. The entirety of the frequency range is represented with great uniformity, giving a real sense of performance. Nothing is overstated; nothing is overlooked. All of the bass/guitar/drums/voice elements are neatly integrated and served up with gusto. 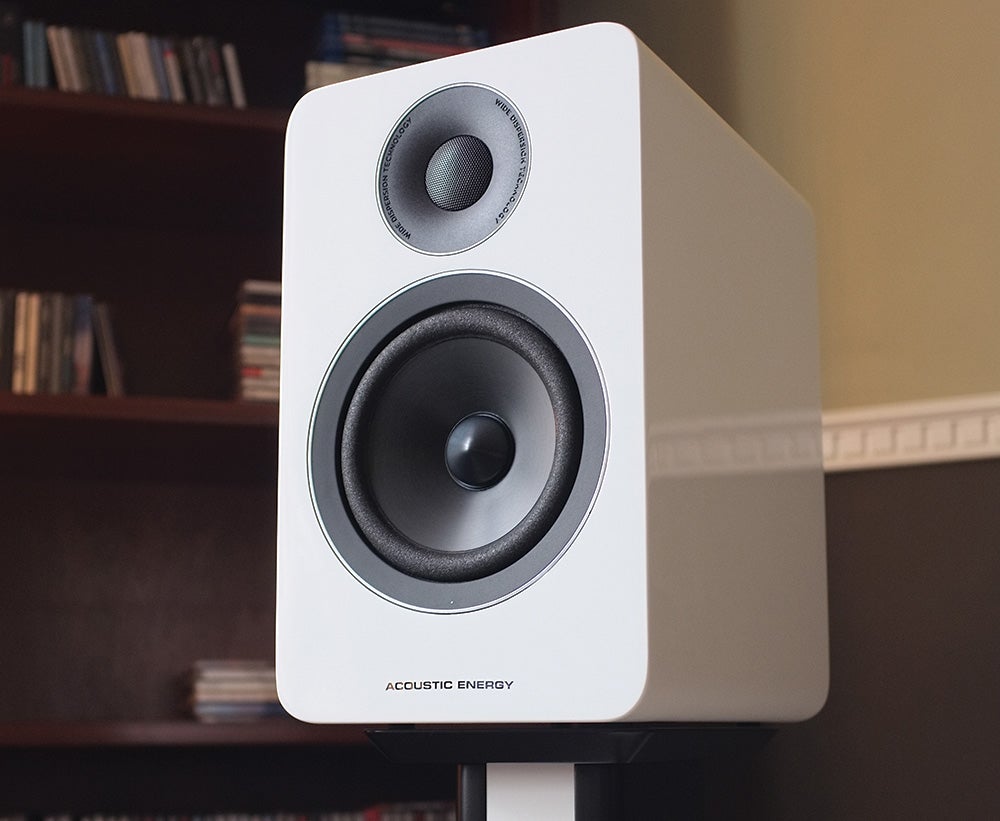 This level of enthusiasm and drive is maintained with a switch to a CD copy of Lee “Scratch” Perry’s “Roast Fish and Cornbread”. Even though the Actives deal with the sludgy tempo and rolling skank without any alarms, they still manage to propel the tune forward without getting pushy. Without doubt, the AE1s are on the perky side of neutral in their overall attitude, but there’s nothing fatiguing about their enthusiasm. They simply sound engaged, and engaging.

No matter what you throw at them, the AE1s remain in control. Bass is fulsome, straight-edged and textured, while the mid-range above is equally detailed and communicative. At the top end there’s bite and attack, but none of the harshness the deployment of an aluminium tweeter might suggest. Dynamically they’re impeccable, switching from a whisper to a yell and back again without anxiety.

A wireless stream of Errol Garner’s reading of “On the Street Where You Live” allows the Acoustic Energy AE1s to show off their wide dispersion and even wider imaging. Timing of the tune is unarguable, even when the orchestra really starts to crowd Garner’s piano, and there’s utterly natural weight and momentum to the swing of the recording.

The AE1 Actives are exactly the product Acoustic Energy should be turning out at this point. That they’re so very accomplished makes them exactly the sort of product to which you should be listening.

You should buy the Acoustic Energy AE1 Active if…

Let’s imagine you’ve decided to pair an Amazon Echo Link to the Actives – that will take your spend to just shy of £1200 for a compact, discrete system with wireless, digital and analogue inputs. Can you buy this sort of sound quality, for that sort of money, by going down the “passive speakers/integrated amp” route? We think not.

A pair of KEF Q350s teamed with a Rega Brio amplifier would get you most of the way there, but it’s arguable whether the KEF/Rega combo could match the AE’s verve and, well, brio. While both the KEFs and the Rega are extremely capable products in their own right, they won’t deliver that unity of sound of which the Actives are capable.

You shouldn’t buy the Acoustic Energy AE1 Active if…

What about other active speakers? Well, in terms of price the AEs are really only challenged by KEF’s little LSX pair. These offer extra functionality, but they don’t have the scale (or the attack or, again, the out-and-out verve) of the AE1 Actives. They’re not as adept and they’re not as wide-ranging in their talents.