There’s absolutely no doubt that the Apple iPod is the most popular digital music player. Whether it’s the best is open to debate, but that hasn’t stopped the white wonder becoming the de facto standard in personal audio. What the iPod brought to the masses was the convenience of having most, if not all, of their music collection on a pocket size device. So, you’ve got you’re entire music collection in your pocket when you leave the house, but what about when you’re at home? 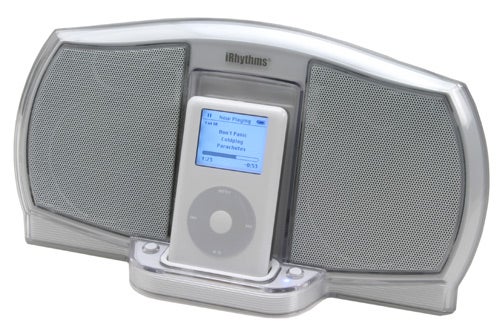 The obvious answer to the above question is to just play your original CDs – of course you have original copies of all the music on your iPod right? But as I mentioned in a column a while back, the general consumer seems to be far more interested in convenience than quality and will often find the “laborious” process of finding a CD and placing it in the CD player far too much to bear. So, the obvious answer is a device that lets you playback the contents of your iPod over loudspeakers rather than headphones.


Of course iPod speakers are nothing new – if you wander into the Apple Store in London you’ll see loads of different speaker sets to complement your iPod. But there’s more to a set of iPod speakers than a white lacquered finish, they also need to sound good. I’ve listened to a fair few sets of these speakers and the sound quality is variable to say the least – which is why we’ll be doing a group test very soon – but to a certain degree you do get what you pay for. Sometimes however, a product comes along with a level of quality that’s well above what its price point would suggest – such a product is the Acoustic Authority iRhythms. 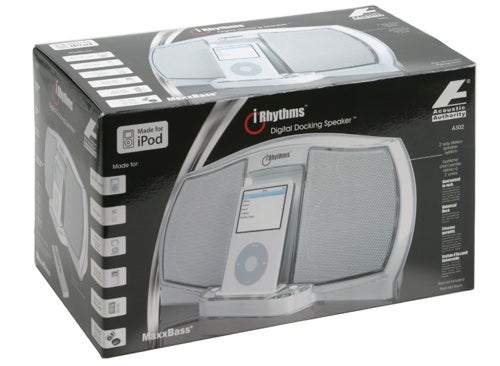 OK, so the name is a bit naff – it looks as if anything with a small “i” in front of it will do these days – but the actual product itself is far more impressive than its moniker. When you’re reviewing a sound product, logic would dictate that the most important aspect would be sound quality. However, when you consider that this is an iPod accessory, it could be argued that aesthetic value is more important – after all, for many iPod users it’s more about the way it looks than the way it sounds.

The iRhythms come in two flavours – black or white – to suite your choice of iPod, mini aside. Although both look good, the general consensus around the TrustedReviews office was that the white looked just that bit more stylish. The shape is very rounded and organic looking, much like the iPod itself. At the centre is the docking port for the iPod – in the box you’ll find docking plates that should allow pretty much any iPod to sit comfortably. I tested with 3rd gen, 4th gen and 5th gen iPods, as well as a mini and a nano – all sat very solidly and worked flawlessly. 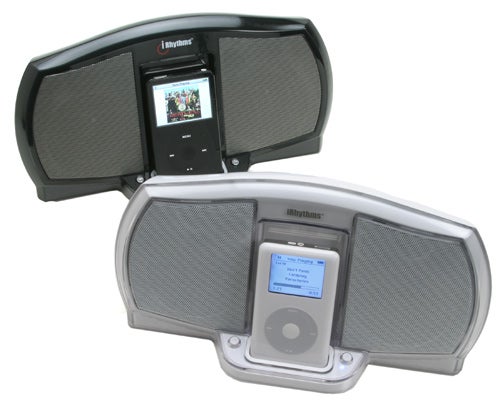 Sitting either side of your iPod are the stereo speakers – these are a reasonable size, but not large enough to dwarf the player that’s driving them. Also, either side of the docking connector are volume plus and minus buttons, as well as an on/standby light. Interestingly there’s no standby button, only a hard power switch at the rear – if you want to put the iRhythms into standby you’ll need to use the remote control. Talking of the remote control, it’s a nice slim-line device that lets you control the volume of the iRhythms as well as being able to skip forwards and backwards through the tracks on your iPod. 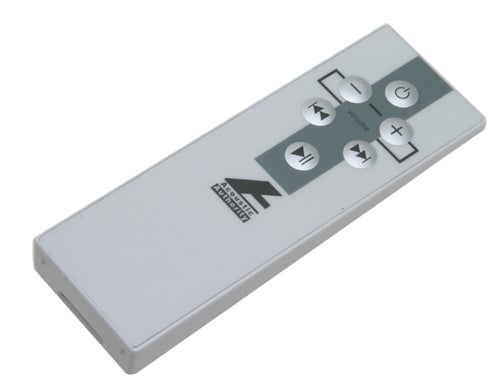 At the rear you’ll find the aforementioned hard power switch and a plug socket for the supplied external power brick – the power brick is reasonably small and unobtrusive. There’s also a cut-out at the rear for storing the remote control – this is pretty handy and saves you putting it down somewhere and losing it. Finally there’s an auxiliary mini-jack input for routing another device to the speakers. There’s a supplied cable for connecting a device to the aux input, while UK and Euro power cables are also in the box.

There’s no denying that the iRhythms speaker set looks great when equipped with an iPod. Personally I think that the white set just works a bit better than the black. That’s not to say that the black set looks bad – I used the black set with both a black 5th gen iPod and a black nano and it did look undoubtedly good in both cases. However, the white set equipped with my 4th gen white iPod just looked so much better. This is partly to do with the fact that the clear plastic bezel is easier to see with the white set, giving the whole setup an almost translucent appearance – although the black set also has the clear plastic bezel, it’s almost impossible to see and just looks like a black lacquered finish. 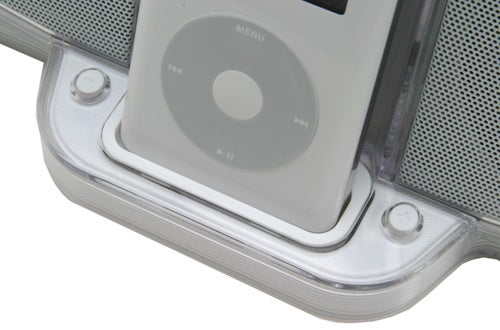 But all the stylish design in the world can’t compensate for poor sound quality in a device like this. Thankfully for Acoustic Authority’s sake, the iRhythms sound very good indeed. For many iPod users the sound quality from these speakers will be a revelation, since the bundled Apple ear buds are mediocre at best and if that’s the only way you’ve ever listened to your iPod you won’t believe the fidelity offered by the iRhythms. Of course if you have enough sense to use high-quality headphones with your iPod, then the initial experience of the iRhythms won’t be quite so stark. 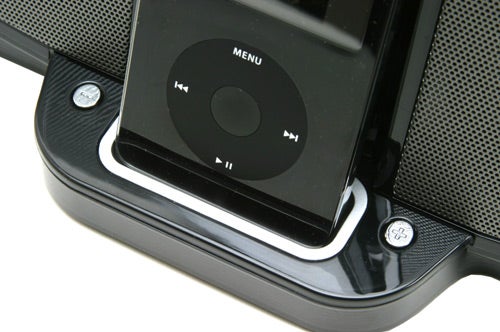 The most impressive aspect of the sound envelope created by the iRhythms is how it fills up the room in a way that many small stereo systems would struggle to do. The low frequencies are very well resolved and even when you pump the volume up high, there’s no evidence of the distortion that affects so many similar speaker sets. That said, the bass isn’t too boomy and you don’t feel like the table is vibrating when you crank the volume up.

But for me, sound quality isn’t about how loud you can crank the volume, it’s about being able to pick out the subtleties of the music. As Jon pointed out when he reviewed the Onkyo iPod Dock, connecting very high-end equipment to a device like the iPod will just highlight the limitations of the source device. With this in mind a solution like the iRhythms is probably preferable, although I found that even this speaker set showed that the iPod is far from the best digital music player from a quality point of view. 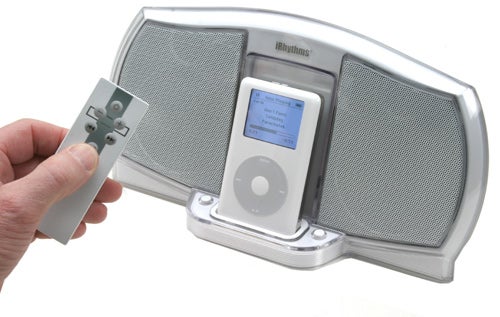 Let me qualify the above statement though, because I don’t want anyone attacking me for saying that the sound quality from an iPod is terrible, because it’s not. But devices from Sony and iRiver do manage to produce a more detailed sound envelope than an iPod when using MP3 source material encoded at the same bit-rate. Listening to an MP3 of Glory Box by Portishead (encoded at 192kbit) via my 4th gen iPod at a subdued volume resulted in a slightly muffled sound, with the upper end noticeably compressed. But firing up Fear by Ian Brown, also encoded at 192kbit showed just how amazing this combination of iPod and speakers could sound – the amount of subtle detail that could be picked out was superb, while the overall impact of this undoubtedly powerful track was maintained. 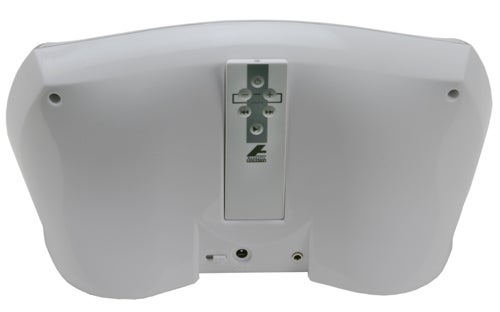 For comparison I connected a Sony NW-HD5 to the auxiliary input of the iRhythms and there was a tangible improvement in sound quality when playing back MP3 content. Switching to music encoded in Sony’s proprietary ATRAC format just took things to a completely different level. Of course if you’re an iPod user that’s concerned with sound quality you’re better of ripping your CDs to AAC rather than MP3 in the first place. There was a definite improvement when playing back 192kbit encoded AAC tracks on the iRhythms, while using Apple lossless encoding really showed what these speakers are capable of – although a 256kbit ATRAC encode on the Sony device sounded every bit as good.

Despite the fact that the iRhythms can highlight the limitations of the iPod’s MP3 playback capability, this still represents an excellent companion for your little Apple player, no matter what format you own. The simplicity of being able to just dump your iPod on the dock, grab the remote control and fill your room with your entire music collection is very compelling. I also think that many users will be pleasantly surprised at just how good their iPod sounds when being pumped through these speakers.


One last point worth mentioning is that these speakers are magnetically shielded, so you’ll have no problem placing them near a CRT television or monitor. If you’ve seen what non-shielded speakers can do to a cathode ray tube, you’ll understand why this is important. 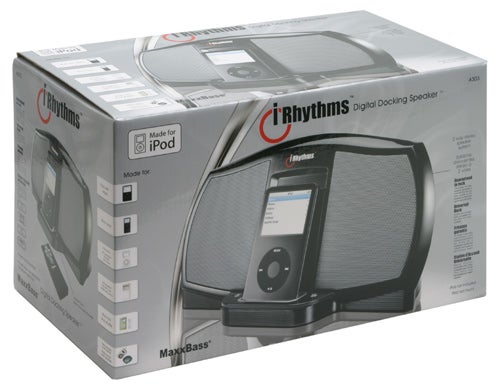 With a retail price of around £125, Acoustic Authority will be making things pretty tough for the competition. There are a lot of other speaker docks available at around this price, but I haven’t listened to any that can hold a candle to the iRhythms. Put simply, if you want to be able to open your iPod library to a wider audience, or just annoy your neighbours, you want these speakers!


With more and more consumers carrying their whole music collections on their iPod, it makes sense to be able to playback all that content in a less “personal” way. The iRhythms provide a simple way to amplify your iPod, while maintaining the highest level of sound quality that the source can produce.


Considering the price point, the sound quality, design and overall finish of the iRhythms, this speaker set is outstanding. This may not be an official Apple product, but it looks, feels and sounds like it could be.


”’Note:”’ The iRythms will be available to purchase in the UK towards the end of March 2006, from Scan, Micro Anvika and most iPod retailers.