Acoustic Authority is a fairly new company, but considering how impressed we were with its iPod Speaker Dock we felt we should take a look at its active noise cancelling headphones.


Active noise cancelling technology has been around longer than I have, being used in cars, small aeroplanes and many industrial sectors. It works on a basic principle that any 15 year old will have been taught about in school.


A microphone on the outside of the headphones takes a sample of external noise. This is then sent to a digital processor which generates an antiphase wave that is sent to the speakers. This antiphase wave is a complete opposite of the noise outside of the headphones, causing destructive interference. Two opposites cancel each other – just like minus one add one makes zero.


Of course just because something that works in theory doesn’t always mean it will work in practice. A mistimed destructive wave can very easily become a constructive wave and outside noise just ends up louder. This is why until recently if you wanted this technology in a set of headphones you were expected to pay a hefty price premium. Creative recently attempted to bring this technology to the budget segment with its HN-700 headphones, but sacrificed a degree of sound quality in order to get the technology working. With very little in the budget segment for this technology, I took a look at what Acoustic Authority had to offer with baited breath. 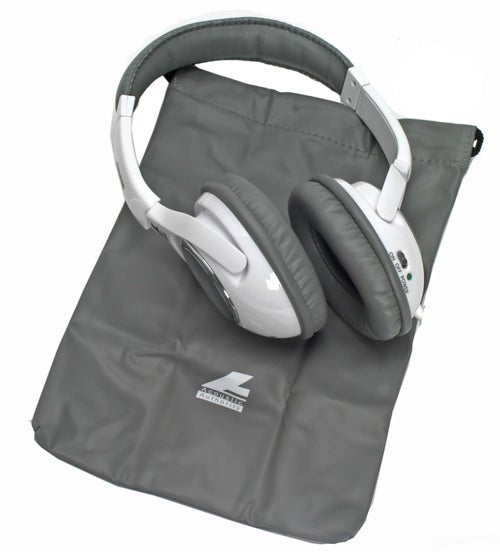 The headphones are designed to match the iPod style and they do so with an Acrylic white and grey finish. Also included is an adapter so that they will work on older aeroplanes that still use two 3.5mm mono jacks. There is a grey faux leather bag with a smell pungent enough that I can envision groups of teenagers hanging around on a street corner taking a good lung full. The ear pieces twist around 90 degrees so that the headphones can be collapsed flat, but they are still going to take up a fair amount of real estate in your carry bag.


A single ‘AAA’ type battery is included, which slips in to the right hand earpiece, powering the sound cancelling portion of the device. This also amplifies the volume a little which I found necessary using my Sony Network Walkman E-507 which has quite a weak output. 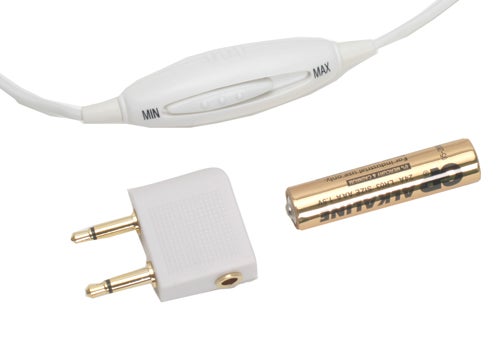 There is an inline volume control, which is a pet hate of the whole TR team – they chew up battery power and potentially add noise to the signal. From a more physical point of view, they tend to weigh down cables, get caught and generally annoy us!

The headphones are really quite comfortable to wear, as they have some soft pads made from the same material and colour as the carry case. These actually block out a significant amount of noise by themselves. 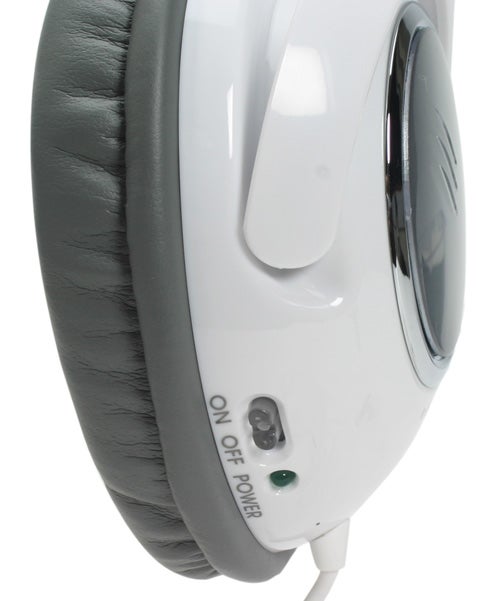 Also on the right hand ear piece, is a switch to turn on (and naturally off) the noise cancelling aspect of the headphones. This made it very easy to work out if they were doing their job.


The A-9900 headphones are very good at getting rid of consistent noises. For instance, the whining from my computer was cut out completely. Standing underneath our rather rackety air conditioning unit also showed a huge difference. Sudden noises such as typing and conversations weren’t as easily cut out. However, when on the move they really shone where most of the background rumble of a tube ride was cut out. Once again though, the clicks and clacks did come through. We were equally impressed when used in an aeroplane, which is obviously Acoustic Authority’s target market.


With the noise cancelling enabled the sound quality was most impressive and didn’t sound muffled like it did with the Creative headphones. Bass response was excellent and the sound really enveloped me. Listening to Goldfrapp on these headphones was an experience to remember. With the bass boosted on my Sony Network Walkman E-507, it actually made the headphones shake on my head! Naturally, there are better sounding headphones out there, but all things considered we were impressed.


These headphones are superb. The noise cancelling is good enough that ATI would do well to bundle them along with its latest graphics card. Sound quality is the best we’ve seen in this price range for sound cancelling. At an estimated £39.99 on the street it’s hard to fault them.