Cyber Acoustics is a brand that has been around for some time in the PC audio market and in the past was only really satisfactory for the less discerning user. Creating the Acoustic Authority brand has enabled the company to move away from that low rent association and start afresh. At the same time, the iPod has provided a great opportunity for many speaker manufacturers, and almost all have been falling over themselves to produce sets that cater for the modern musical wonder.


So far, Acoustic Authority has impressed us not once, but twice with its iPod speaker dock set, which not only did well in a stand alone review, but also put in a group-test winning performance when up against three other similar rivals. Can the A-211s keep up this good run? 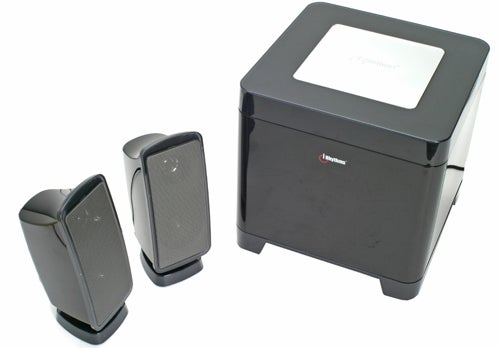 The set is essentially a standard sub-sat system with the addition of an iPod dock. It’s also available in white as the A-210s so you can tailor it to match your iPod colour of choice.


The A-211’s satellites are fully shielded which is a clue that there are intended as PC speakers rather than dedicated Hi-Fi set. One might wonder what the point of the dock is, as all the music on your iPod is likely to be on the PC the speakers are attached to. However, it does mean that you can play your iPod music without having to turn on your PC. 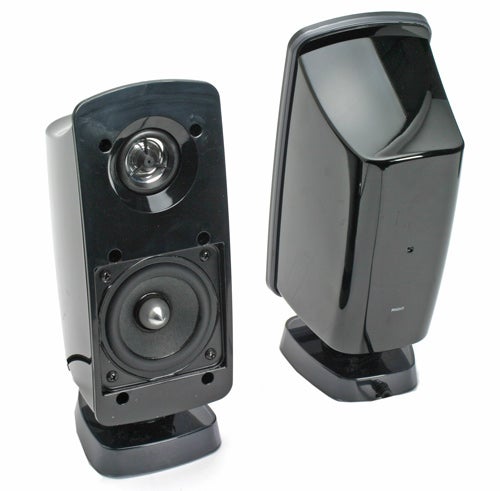 Speakers dock converters are included in the box enabling you to snugly fit any iPod from the third gen model onwards. Of course the iPod shuffle doesn’t have a dock connector so to cater for it, or indeed any other audio source, there’s an auxiliary input at the rear of the dock.


By the way, the pictures are a tad misleading as no cables are visible. Rest assured they’ve are plenty of cables and it can get a bit tangled if you don’t keep things in check.


There’s also a remote control for controlling the whole kit and caboodle from a distance. This only provides basic Stop/Start and Skip – you can’t navigate the iPod menus from the remote. The remote is not particularly handsome and looks a bit eighties and not in a good way, but it works. A slot for storing the remote is located just behind where the iPod is placed. 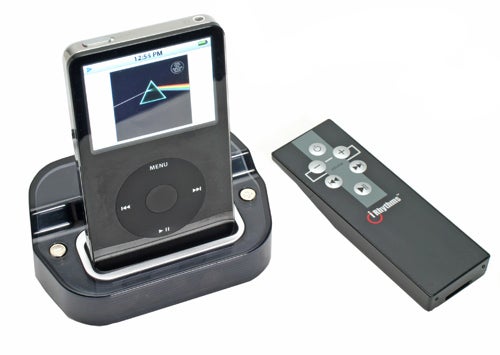 The satellites are described on the Acoustic Authority web site as ‘flat panel’, which quite frankly I don’t understand – they’re not flat at all. They’re not particularly large, but they’re not flat. They contain a 2.5in driver and a tweeter but the housing is made of plastic and felt very light in the hand which didn’t bode too well. Stronger housings normally do a better job at dealing with sonic resonance.


The sub-woofer though is where all the action is. The satellites connect to this via two colour coded phono connectors labelled left and right. There a RS-232 port for connecting the iPod dock and a bass volume control. It couldn’t really be much easier.

The sub has a downward firing 6.5in driver and is ported, which helps shift air to improve bass response.


For testing we tried a range of music with different styles. The first track we tried was, ‘The Great Gig in the Sky’ by Pink Floyd and we found that we were soon involved in the track with the high strung vocals creating a powerful mood. 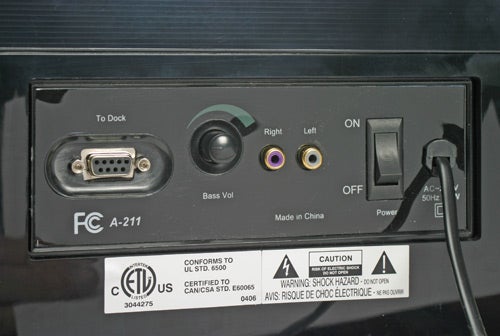 The Foo Fighters created a wall of sound, that sounding powerful and impressiv. The bass sounded a touch boomy but things improved when I lowered the bass volume on the sub-woofer. The set was notable for going quite loud and seemed to be hitting the spot.


What we needed though was some tough competition and for that we unboxed another sub-sat set – this one was from Hi-Fi specialists Acoustic Energy (AE). The full review of these will be forthcoming so I don’t want to give too much away. However, suffice to say that these quickly spoilt the party for the iRythms A-211s, which were no longer able to assert their Acoustic Authority.


The AEs were simply better, with a tighter, crisper sound. Instruments to be placed more accurately and the whole soundstage was more enveloping and 3D like, yet also more natural. Switching back and forth between the two, the Acoustic Authority sounded comparatively muddy, and the bass looser and woollier.


The delicate vocal sibilants in a string vocal track such as George Michael’s cover of ‘The First Time I Ever Saw Your Face’, was a good demonstration of this, with the sibilants sounded rounded and indistinct on the A211’s compared to the Acoustic Energy.


Moving to tracks where fast bass response was needed, such as Madonana’s ‘Die Another Day’ and whereas we were foot tapping with the Acoustic Energy, we were frowning slightly with the iRythms.


The story repeated with all the music we tried. Overall then the iRythms were shown up by the Acoustic Energy set. Even so they aren’t actually bad speakers. 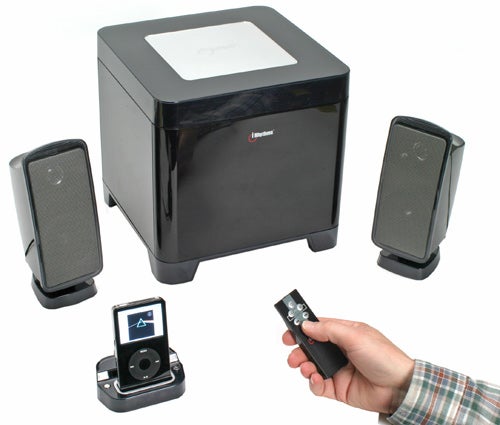 A bigger issue is that in the UK the SRP will be £199, which rather amazingly is twice the price of the Acoustic Energy set. This is unfortunate as in the U.S.A, the same set can be picked up for $180 – currently £95. If they were this price then they’d be worth considering as while you could get better sound quality for the money this can be offset by the convenience of the remote control and of course the iPod dock.


However, this isn’t the case, which makes the A-211 very poor value for money.


A reasonable sounding set of sub-sat speakers with a handy remote and iPod dock, but when you can get a much better sounding set for half the price, it’s pretty much impossible to recommend the Acoustic Authority iRhythms A-211s.