Let’s address the title first – this is a confusingly named game. Aces ‘of ‘ the Luftwaffe? My initial reaction was that, in a fit of edgelord offensiveness, this would see you playing as the Nazis in World War II. Instead, ‘Aces’ refers to a cadre of unlikely sci-fi death machines, unleashed over the skies of the US in the dying days of the conflict. As for ‘Squadron’, that both refers to the quartet of pilots you control as you shoot down the Aces, and as a way to differentiate this console release from the smartphone original.

Gamers often default to thinking of scrolling shooters, or shmups, as the domain of Japanese developers – which makes Aces, coming from German developer HandyGames, something of a curiosity.

Mechanically, it ticks all the boxes players expect from the genre, with hordes of on-screen enemies all too eager to be introduced to the business end of your plane’s weapons. Power-ups regularly boost your firepower to anachronistic levels of sky-borne doom, taking you from simple bullets to screen-shredding rotating lasers and enemy-obliterating null-matter bombs. Downed foes drop medals that serve as score boosters.

However, looking at it purely as a shooter, Aces has none of the complexity of shmups such as Ikaruga or a game from The Touhou Project. It demands none of the hyper-precise movements and rapid pattern recognition skills required to survive those bullet hell-shooters. If anything, this is on the slow side, with enemy movements and bullet fire simple to dodge. 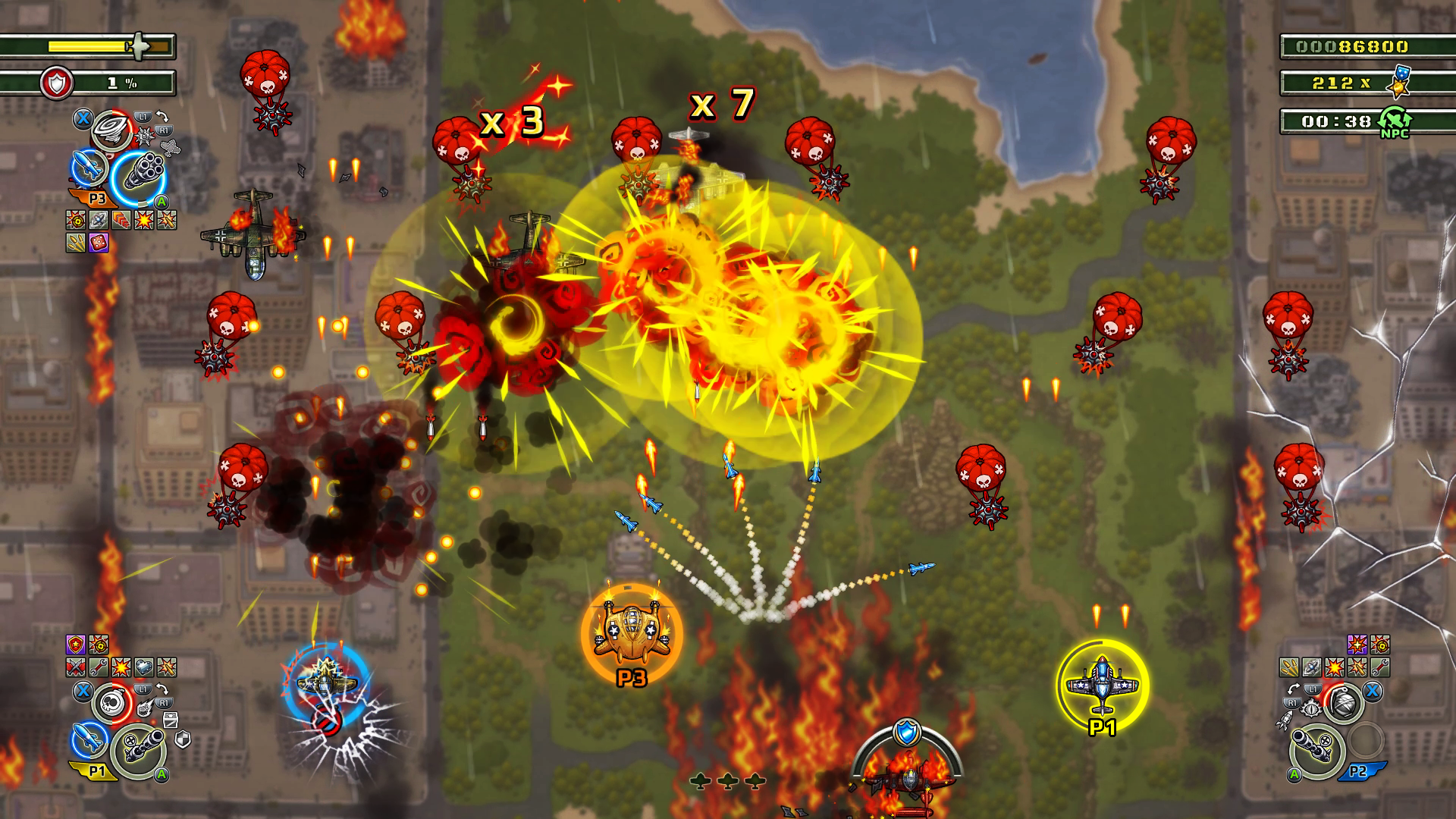 It even features a few mechanics to force you to slow down further. Each of the four pilots in your squadron – leader Mark Taylor, mechanic Melissa Monroe, gunner John King, and specialist Steve Davis – will randomly suffer from afflictions that require you to change your flight style mid-mission.

Taylor will be struck by bouts of a mysterious sickness, cured by you moving around the screen as little as possible. Davis is prone to falling asleep at the stick, leaving the other three to protect him. King flies off in unpredictable rages, destroying your remaining ships if he collides with them, demanding you fly carefully to avoid him. Monroe’s handicap is less intrusive – she doesn’t like frequent changes in altitude, and will occasionally disappear for a breather, leaving you free to fly but slightly underpowered for her absence.

What makes Aces more interesting is its mission structure and almost-RPG levels of character and airplane progression. Each level has five episodes, culminating in a battle against one of the eponymous war machines and their caricaturish pilots. As well as having to shoot everything that moves, those individual episodes will have sub-missions to complete. These might include taking out U-boats, rescuing trapped soldiers, or making supply drops to Allied forces. Less incidental tasks feature too, notably ‘Chase’ missions where you have to keep up with Aces while avoiding all damage. 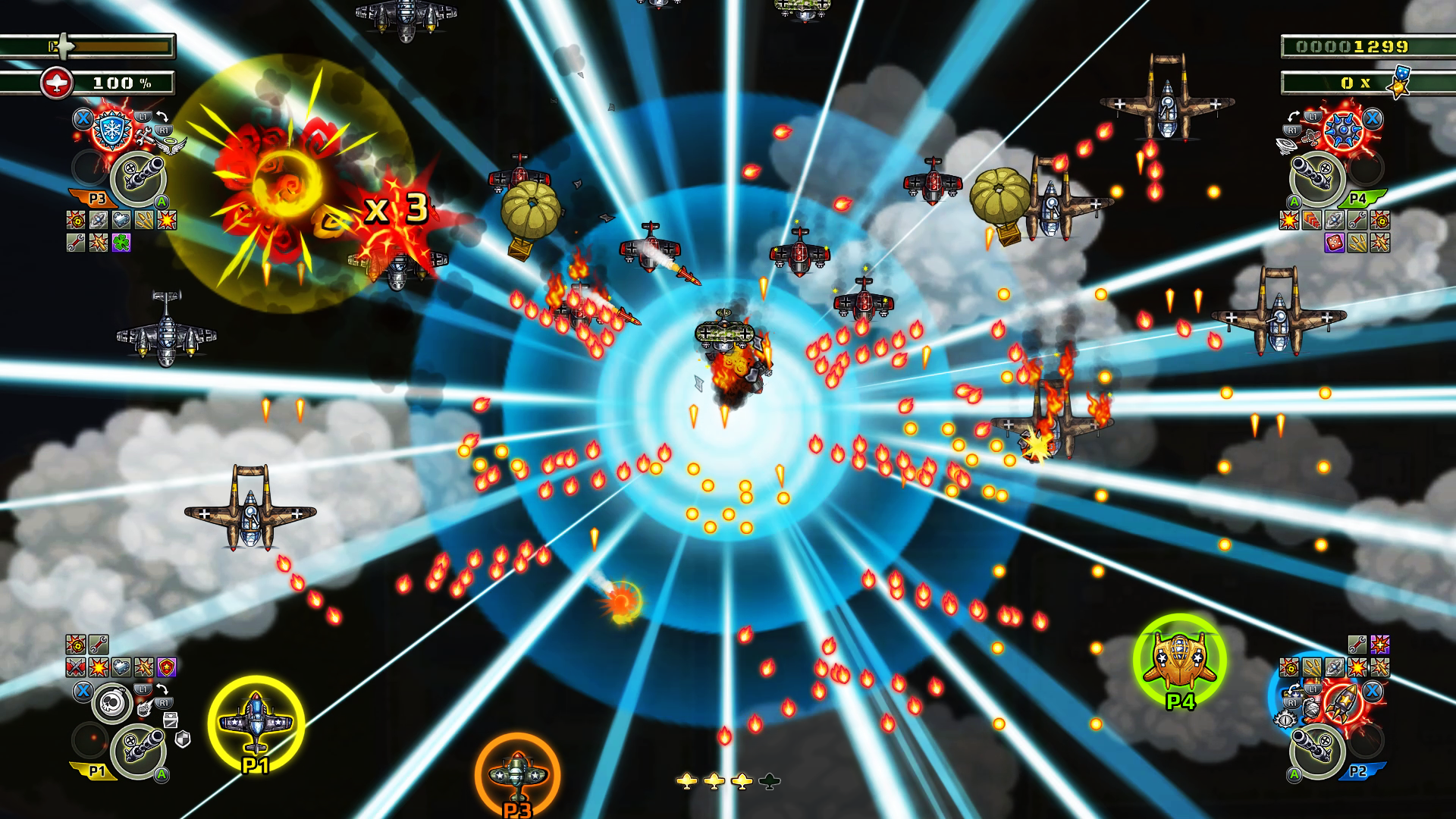 Characters can be enhanced with tokens, earned each time you level up. This enables you to boost abilities such as Monroe’s repair skill, or improve each character’s health, damage rate, and manoeuvrability. Plans for variant aircraft can also be found, allowing you to fully customise your fleet of four.

You’ll also be able to set which skills your teammates will activate automatically when you’re playing solo, or can be triggered by friends when playing co-op. Such wide personalisation is welcome, but even on harder difficulties, the game doesn’t really offer enough challenge to necessitate fully powering up your crew.

Finding bonus upgrade tokens can be troublesome, too. Each episode has an extra token to find, but no indication or even seeming logic in how to find them. Sometimes they seem to drop when you shoot certain enemies, but in other episodes, you’ll clear the screen of all foes and yet not get anything.

Although episodes can be replayed at will, after your fourth or fifth time through with no sign of what you’re looking for, you’re likely to become frustrated. 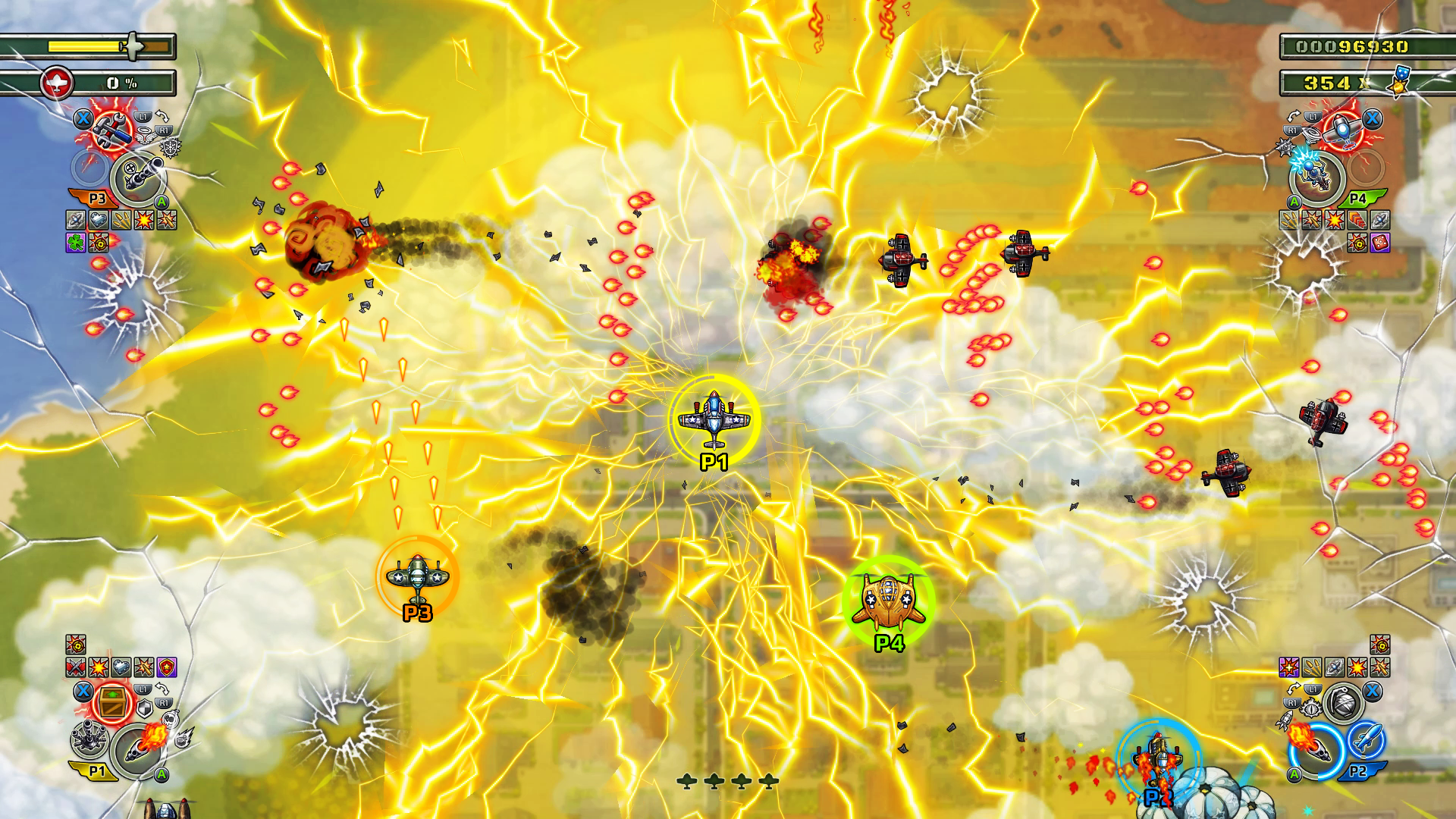 Despite its console port, Aces of the Luftwaffe: Squadron clearly remains a smartphone game at heart. Its visuals are sub-par, with overly simple character and vessel designs, minimal animation, and indistinct backgrounds.

The cast, while fully voiced, is also subject to some of the worst acting heard in a game in years, with dodgy accents, stilted delivery, and attempts at jokes that are so painfully unfunny it staggers belief.

Essentially, it all feels a bit cheap, although with its budget price there’s still some fun to be had with this flawed, if interesting, take on the shmup genre.

As far as smartphone ‘uplifts’ to consoles go, Aces of the Luftwaffe: Squadron is one of the better I’ve seen. It isn’t going to challenge shmup fans, but it does gain some points for at least trying to do something original with the formula.

An afternoon’s curiosity, although not one you’re likely to return to the next day.