Nvidia has hyped up its G-Sync technology since its 2013 launch, but this is the first time we’ve had one of these screens on the test-bench. Acer’s XB270H doesn’t just have Nvidia’s latest tech in tow – it’s got a 144Hz refresh rate, too.

This may be the first G-Sync screen we’ve reviewed, but it already faces stiff competition. It’s outnumbered by gaming panels without this technology, it’s pricier rivals, and competition from AMD is in the pipeline.

Nvidia G-Sync makes fundamental changes to the way monitors and PCs communicate to deliver smoother gaming. Traditional screens are locked to a certain refresh rate – traditionally 60Hz – which means they sometimes can’t properly respond to the frames being produced by a PC’s graphics card.

Nvidia’s hardware removes this firm 60Hz limit, instead forcing the screen to run at the same frame rate as the graphics card. The matched refresh and frame rates mean tearing and stuttering is eliminated, as there are no delays or bottlenecks between the PC and the monitor.

This smart design makes gameplay smoother, and here it’s paired with a top refresh rate of 144Hz. That means the screen is able to redraw frames at more than twice the rate of standard 60Hz panels – another feature designed to create fluid, smooth gameplay.

G-Sync in the real world in slow motion

This, then, is the first 27in screen to deploy a variable refresh rate at up to 144Hz, which is a recipe for some of the world’s slickest PC gameplay. There’s no denying the silky gameplay we observed during our test games, but the Acer’s key selling points won’t always be obvious. Pro players and FPS gamers will appreciate the improved performance, but if you only play Football Manager or Civilization then the extra features just aren’t necessary, as those titles are too slow to really take advantage – and mainstream gamers of all stripes will still find standard screens ample.

There are hardware considerations with this kind of screen. Monitors with 144Hz refresh rates can support twice as many frames, which means graphics cards have to do twice as much work. The 1080p resolution means each frame consists of fewer pixels than panels with higher resolutions, but you’ll still need a high-end GPU in order to produce smooth gameplay beyond 60Hz.

There are other potential pitfalls. Understandably, G-Sync only works with Nvidia hardware, and G-Sync screens currently work because of a discrete module inside the panel – a design decision that increases cost and decreases the number of G-Sync products on the market. Nvidia is making inroads in this department, with leaked drivers indicating that the technology can work without the extra module, but it’s still in development.

AMD is throwing a spanner into Nvidia’s works, too. Its FreeSync technology doesn’t require extra hardware, so it’ll debut on a wider range of screens, and it uses technology that already exists within DisplayPort, so support could be patched into existing screen firmware. As with G-Sync, FreeSync will only work on certain graphics cards, specifically more modern AMD models. 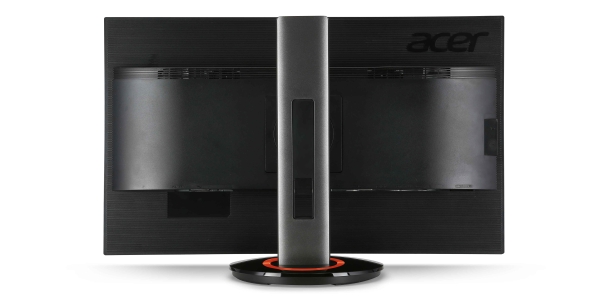 The XB270H is made from a TN panel with an LED backlight – the most common hardware among current G-Sync screens. TN screens usually have short response times, which makes them great for gaming, and they’re known for high brightness levels, though colours and viewing angles tend to suffer.

The 27in panel can swing into portrait mode, and that’s not the end of its versatility. The screen can be tilted from -5° to 35°, and it’s got 60° of left-to-right swivel. The stand’s height is adjustable, too, to the tune of 150mm. It’s a similar amount of adjustment to the ViewSonic VG2401mh, and it’s far better than the restrictive Samsung S24D590PL, which swapped versatility for style.

It’s got DisplayPort 1.2, HDMI 1.4, DVI and D-SUB inputs, two audio jacks and four USB 3.0 ports, with another USB 3.0 port to connect to a PC. It’s a better selection than either rival screen, even if all bar two USB 3.0 ports face downwards – not the easiest place to reach. 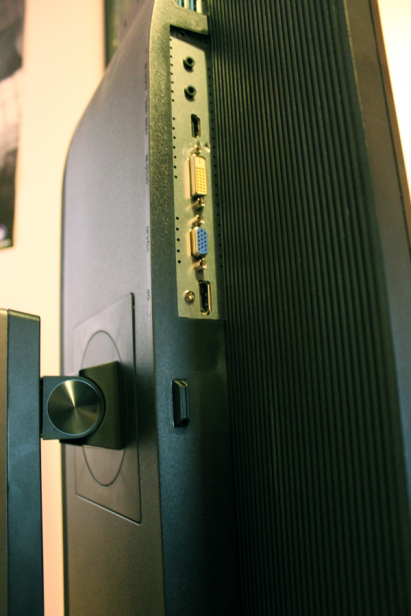 We like the versatility, but we’re less keen on the looks. The screen is surrounded by a chunky, glossy bezel that collects dust easily, and the monitor is too wobbly. The circular base is glossy, with an orange ring around the stand.

Little excites about the Acer’s audio. The speakers are quiet, tinny and distant, with none of the oomph, volume or clarity we require when playing games. Use a headset or plug in separate speakers.

The Acer required a little bit of construction, but it’s not tricky. The stand snaps into the back of the screen using four tool-free tabs, and the circular base attaches using a single screw and a pair of guiding holes – from box to desk took about one minute. The screen moves up and down on its stand smoothly, and swivels and tilts are just as easily accomplished.

Control is handled by five small buttons in the right-hand corner. They’re snappy and fast, but there’s no indication about their functions until they’re pressed – for first-time users it’ll be confusing. 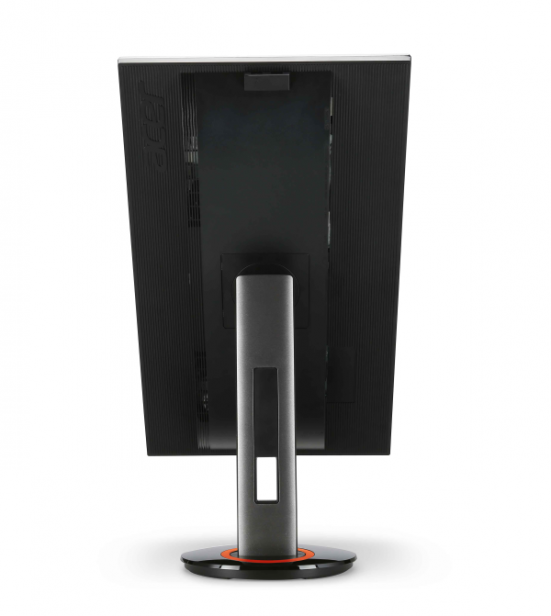 An initial press unveils quick-select options, with Eco mode, speaker volume, screen mode and input all selectable with a single click. The main menu is well-organised: the Picture menu allows brightness, contrast and colour temperature adjustment as well as RGB tweaks, and another menu allows for the on-screen display to be moved. The Settings menu has more mundane options, from inputs to the factory reset.

It’s logical and quick, but it’s not exactly pretty. Acer’s menu is ugly, pixelated, and doesn’t have the same flair as the systems on Samsung’s monitors.